'THE FAST AND THE FURIOUS' DODGE CHARGER: 1:25 SCALE KIT FROM REVELL 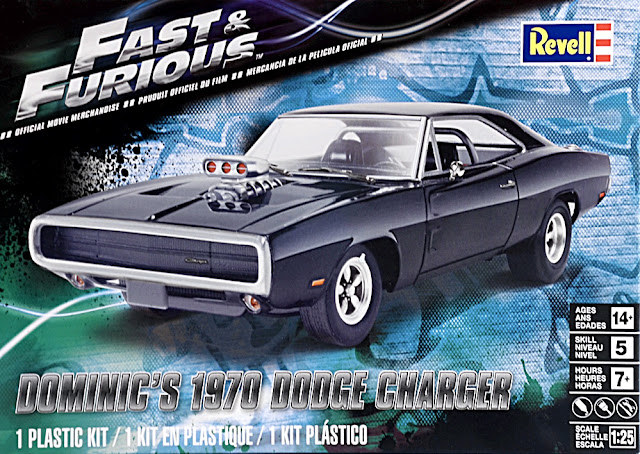 MOVIE MOTORS come to the model bench with this Fast and Furious 1970 Dodge Charger.

Mat Irvine: There are two points to make about this kit of the Dodge Charger that featured in the movie The Fast and the Furious of 2001. First, this Charger is unique to Revell, having nothing to do with the similar kit from AMT. That was issued in the 1990s (and was an MPC kit, anyway) when Ertl had the licence for the movie franchise.

Secondly, and perhaps more surprisingly, the kit we show here has nothing to do with Revell’s existing 1969 Dodge Charger kit that first appeared in the ProModeler range.

The box side panel (below) shows some of the kit’s features. 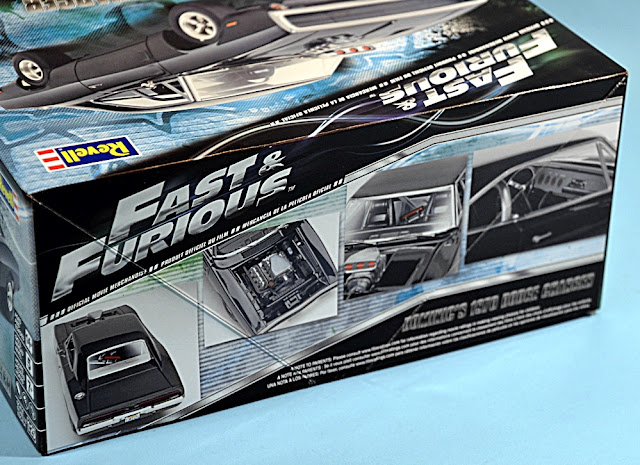 Adapting this earlier kit might have been more logical, as the 1969 and 1970 Chargers were very similar, and Revell obviously already had the tooling. In addition, although the movie car is listed as a 1970 model, it was almost certainly built from both 1969 and 1970 parts.

But no, this is a brand-new kit, of the Star Car version driven by Dominic Toretto, the character played by Vin Diesel. A warning however for modellers who like their machinery in showroom condition: this kit cannot be built in as stock, though it seems almost certain a standard 1970 Charger will appear at a later date.

The Charger's 122 components (below) are crisply moulded, mostly in white. 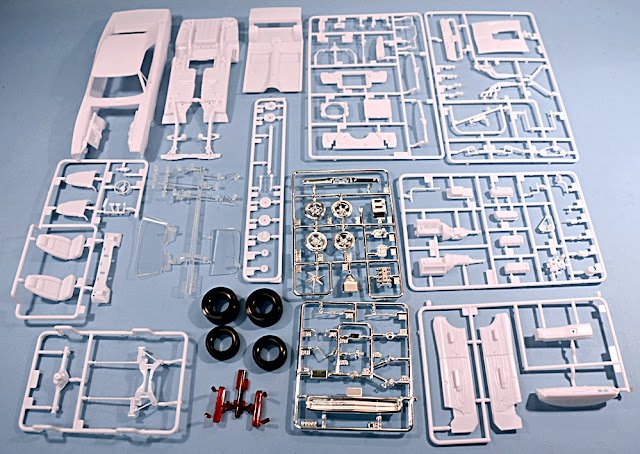 The same car has - supposedly - appeared across the seven-strong range of Fast and Furious movies (an eighth is due in 2017), but this kit is to build the car as seen in the first film of 2001. The kit is conventional in its build-up - a one-piece body, separate engine and chassis components, plus a multi-piece interior. The engine is a 426 Chrysler Hemi, with a Roots-type blower (supercharger) perched on top. The hood is custom-made, with a hole cut for the blower. The exhaust headers extend only a short distance under the car, and the rear-axle springs are lowered on blocks, so raising the car’s rear.

The interior has two bucket seats up front and a roll bar, although details of these fixtures are debatable - see further on. But the instrument panel and side panels are pretty much stock. The floor however, is not, being devoid of carpeting. A stock centre console is supplied but not used, a hint that a stock version is in the works from Revell.

A comparison with the Revell-Monogram 1969 Charger body (below left) shows that this is a new kit. 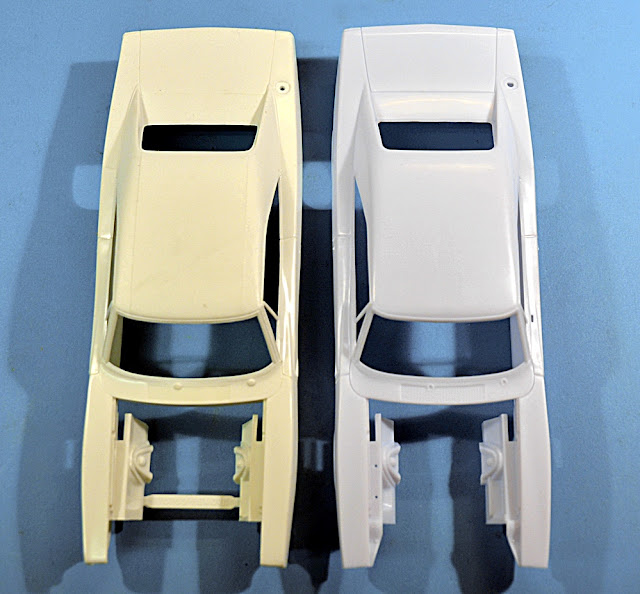 One slight modification (below) made painting easier. I cut off the fire extinguisher on the roll bar, and painted it separately. 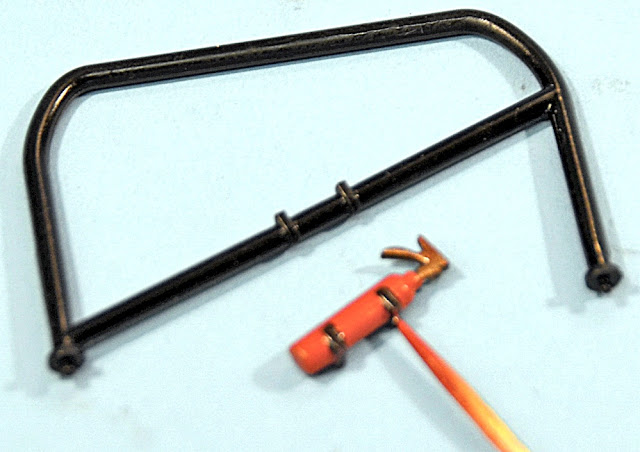 For the paint finish, you will need black, and lots of it. The body, engine block, chassis, axles, interior dash, roll bar and side panels are all black. The only break is the floor, which is aluminium. However the black can vary. Body, engine, and axles are gloss black (I used Testors), while chassis rails, and seats are satin finish. The interior side panels are matt finish (I used Humbrol). For this car the body is gloss black, but for later movies the car appears in satin, and even metallic sheens. 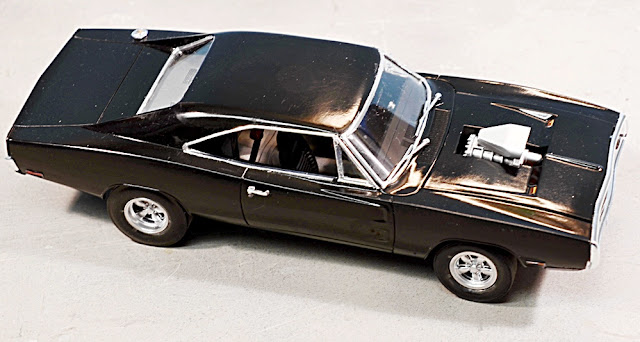 I added the chrome glass surrounds with Bare-Metal Foil. The blower and air-scoop parts are supplied by Revell in chrome-finish, but on the hero car are aluminium - so I oversprayed these with Humbrol chrome silver. The tail lights are supplied in transparent red plastic and these have chrome trim around them, for which I once again used Bare Metal Foil. 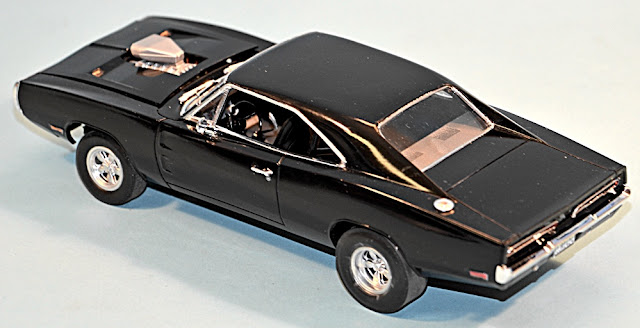 One point to make is that it is difficult to finish the body and then install the interior and chassis. The instructions indicate that the chassis should be fitted before the front and rear body pans are installed. But this will then make it nearly impossible to finish the body ‘as one’. However, it is just possible to cement the two pans in place, paint the body as usual, and, with the chassis completed, only then fit it in place. It means a lot of juggling, and the removal of the front of the chassis rails, but this section isn’t visible when assembled, anyway. The method for fitting the radiator panel also needs modifying, as it is intended to be fitted before the front pan. But it can be slipped through the hole left for the grille, and worked into place that way.

The underside ((below) is neatly detailed. Note the wider track and width of the rear tyres.

The hood is removable, though it is not hinged (below). My added plug leads help to enhance the engine's appearance. 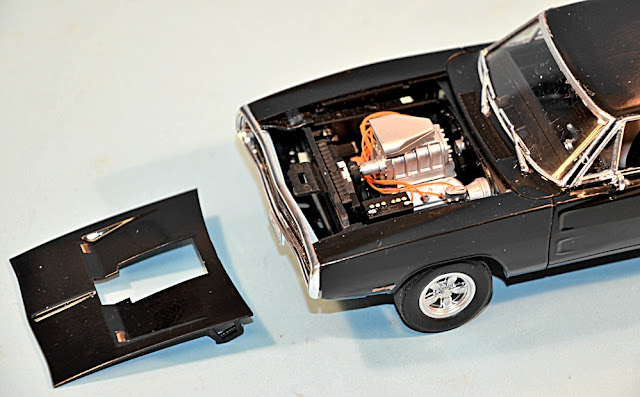 The same-scale Dominic Toretto figure (below) gives the Charger a much enhanced sense of the car's actual size. The resin figure, which bears a good resemblance to Vin Diesel, who played Dominic, is produced by Hobby Design. 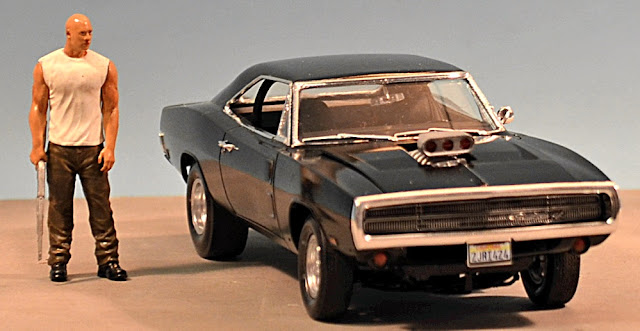 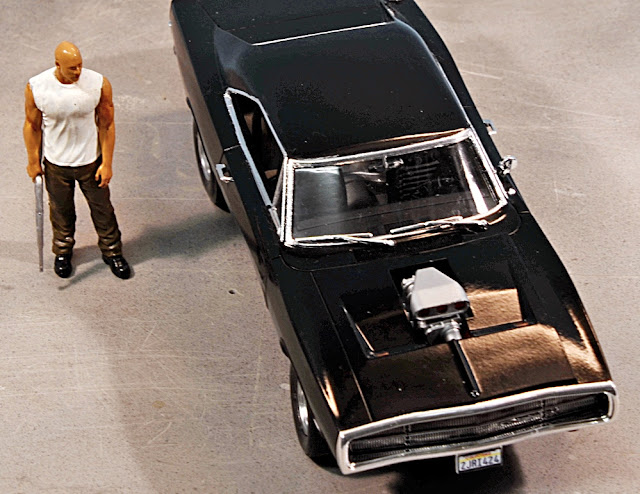 The Hobby Design box (below) and components for the figure. 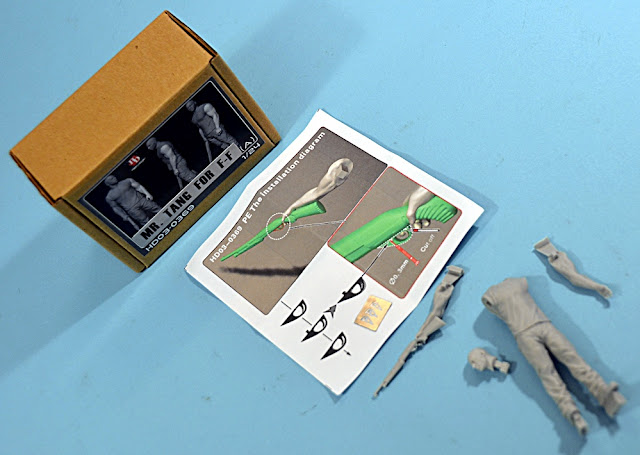 The Dodge Charger and a Mitsubishi Eclipse (below) in race mode. As shown here, I built the Eclipse from an AMT kit, but Revell also produces a model of the car. 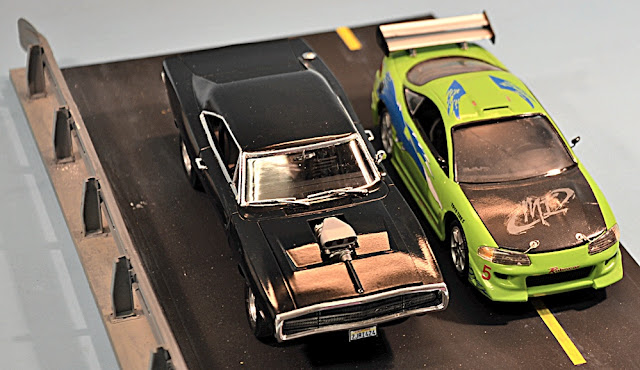 And (below) here's the Charger as it appeared in the final race, lined up next to a Toyota Supra, built from the original AMT kit of the 2000s. Revell has yet to make a kit of the Supra. 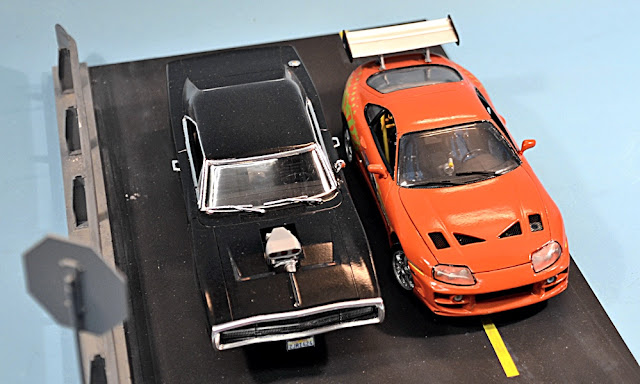 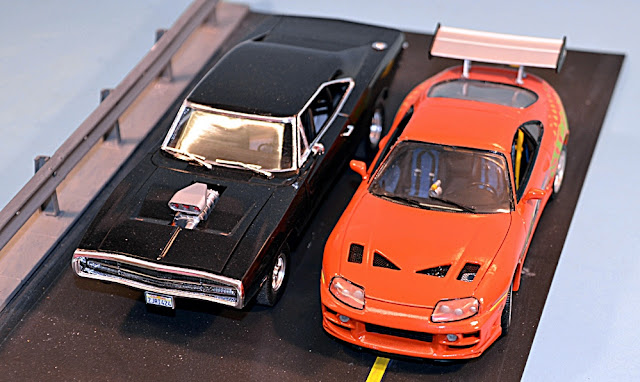 Summation
Overall, this kit is about as close as you are going to get to the actual Dodge Charger you see in the movie. As with many a Star Car, there’s a lot of heated online forum talk as to the accuracy and details of the screen vehicle. In fact, I think this car has generated more discussion - and more disagreement - than any other Star Car I’ve researched.

SMN note: Just in case you don't know all about Vin Diesel and the Fast and Furious movies, here's a trailer that should give you a taste of the action. Hey ho, and to think I get excited about my Ford Focus Sports-Pack suspension setup. Mind you, I'd take a Tesla in preference to either of these cars - electrics are the future.