THE MIGHTY B-70 VALKYRIE, AND MORE AMAZING SUPERSONIC KITS

RARE AND COLLECTIBLE MODEL KITS are a popular subject with model builders. Here, Mat Irvine answers some questions about a North American Mach 3 bomber from the 1960s, the B-70 Valkyrie.


SMN report: Reader ‘Alfa158’ asked this question not so long ago: “…Lindbergh also issued a now super rare kit of the proposed supersonic airliner version with passenger windows and airline markings, but I haven't seen one in the flesh since it was issued and I attend pretty much every model swap meet in Southern California.

“Also, maybe my memory is going wonky, but wasn't there a release with box art showing a B-70 in service at an Arctic base? Maybe I just saw an advertising illustration done for North American Aviation in one of my reference books on model kit art.”

Mat did some sleuthing around, and came up with some interesting answers and observations. He reveals, “…The 'Arctic’ B-70 (below) is most likely one issue of the Aurora kit, not Lindberg. I don't think it's specifically meant to be 'the Arctic', but OK could be, so it seems to fit the bill.”

The night scene on the box appears to represent an SAC (Strategic Air Command) base in the far north, so it could have been set in either Alaska or Greenland. But of course, note that it’s a fictional ‘what-if’ painting, as the Valkyrie never went into squadron service.

Mat continues: “The Lindberg supersonic airliner version (below) of the B-70 is indeed super-rare. I've never seen one 'in the flesh' or plastic - but the box looks like this. But note that the aircraft shown has only one fin, not two.”

And here’s another interesting subject. “I also have a catalogue with this image in it. Whereas the Lindberg SST almost certainly did get issued - as it's a pic of the box - this one may not have. Note though, that it does have the two fins of the XB-70.”

“…Aurora also had another high-speed nuclear airliner (below) that later became the Ragnorok nuclear bomber. Unusually, the kit started out as a civil subject that was transmuted into a military version.”

Mat goes on: “…In a similar vein, there was also the Hawk Beta-1 (below). But this was only issued as the completely fictional atomic-powered bomber XAB-1, in two different box styles.”

Note that this kit has several working features, typical for the era. As well as operating flaps and landing gear, there are working refueling pods, and a pair of parasite fighters. These were designed to accompany the bomber on a mission, defending it if necessary over enemy territory.

“Finally (below), there is the Aurora C-119 Flying Boxcar, even if it was not supersonic, a B-70, or indeed a bomber. However, the evocative illustration may have been the image that prompted Alfa158's memory, as it does have a memorably chilly Arctic feel to it.” 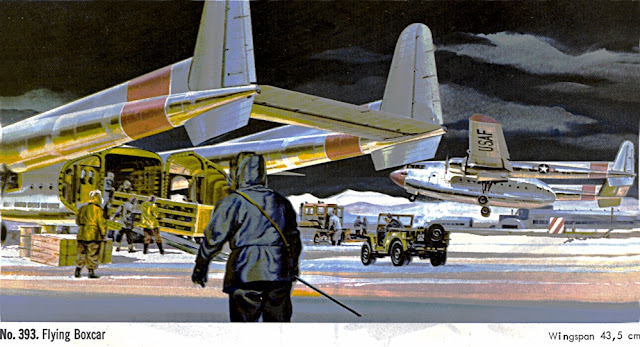