FLY ME ROUND THE MOON: RETRIEVER ROCKET FROM GLENCOE MODELS

THE 1:72 SCALE RETRIEVER ROCKET is a reissued and reboxed Glencoe Models kit, itself based on one of the Strombecker classic ‘Man in Space’ series.


Mat Irvine: The kit parts remain the same, but this time there is new box artwork from Ron Miller, one of the best-known space artists. Ron painted the earlier Glencoe release as conventional artwork, but this time he has digitally combined model photography and background photos.

On the back of the box (below) you get the original art, plus information on how the design came about. 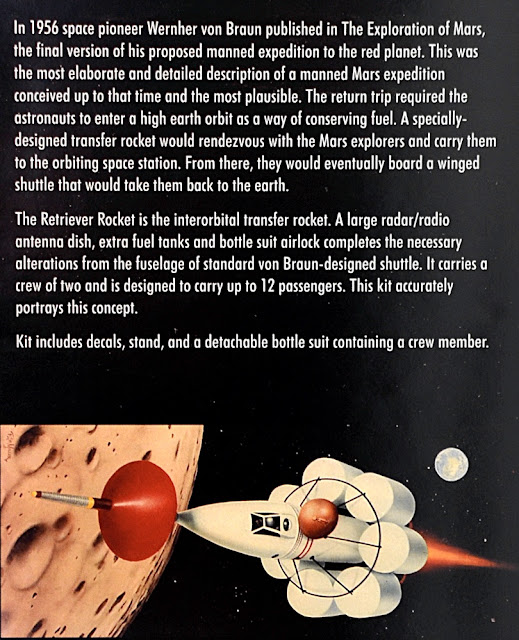 Strombecker first issued the kit in 1957, so it is coming up for 60 years old. Considering its age, the tooling has survived remarkably well, with parts (below) that show only touches of flash. But these are as nothing compared to some other old kits, and it has to be said, a few that are a lot newer, too. 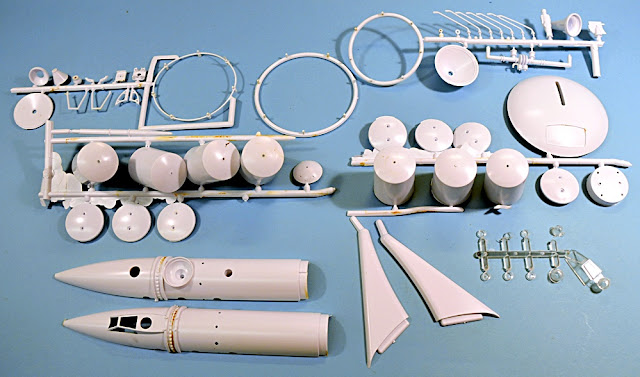 Strombecker issued the original kit as the RM-1, the designation standing for Round the Moon, as the ship was not designed to be a lunar lander. Glencoe has since renamed it the Retriever Rocket, as one possible mission could have been to collect astronauts from a returning Mars flight.

The decal sheet (below) provides a range of different letters and numbers, including the option of creating the original RM-1 designation. 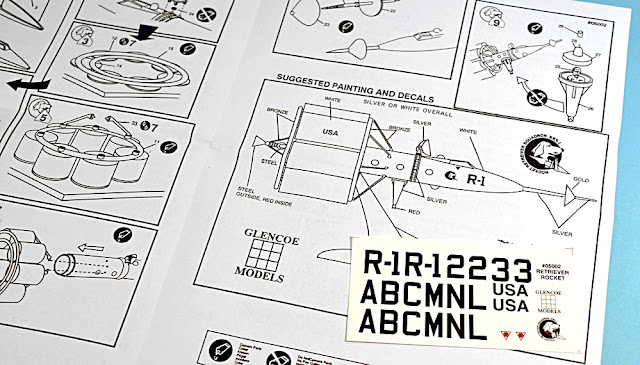 The kit construction is straightforward, though if you want to paint the exterior - and these days most model makers will do so, though few did back in 1957 - you will have to mask off the flight deck transparencies and the portholes. Finish is quoted as white or silver, either of which is logical.

However, one scenario is that the RM-1 would be built in Earth orbit from the upper stage of a three-stage rocket, which also features as a Strombecker-Glencoe kit. This - according to the classic Rolf Klep painting that appeared on the cover of the weekly Collier’s magazine - had a blue fuselage (below) instead of white. But as the RM-1 is a factual-futuristic design, you can choose whichever you want - or devise an original scheme. 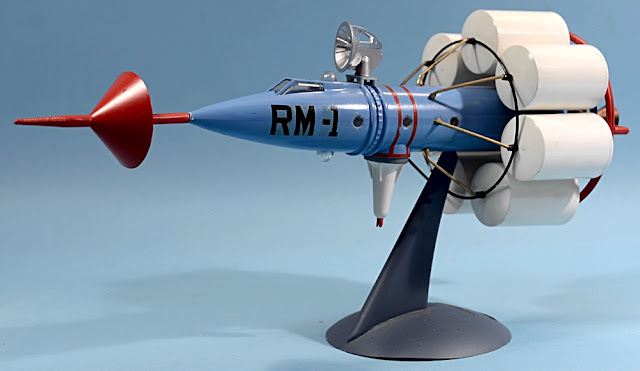 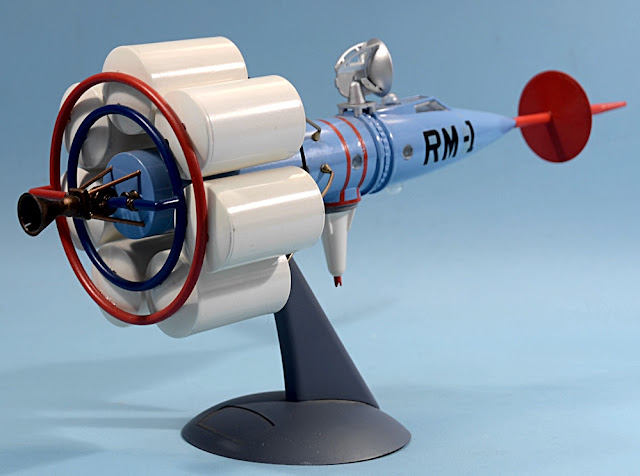 The RM-1 design features seven fuel tanks arranged in a ring (below) with feed pipes connecting them to the single rocket motor. Other design elements are the communications dish, a nuclear power source in the conical nose, plus a small one-person spaceship, called the Bottle Suit. 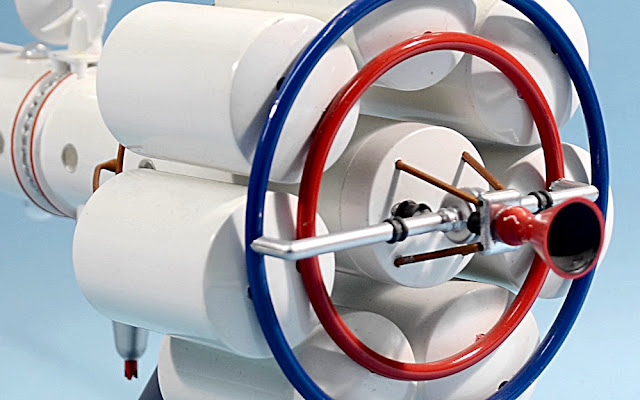 The Bottle Suit (below) would have worked in a similar way to the Manned Manoeuvring Unit (MMU) as used on today’s International Space Station. Both designs allow a crew member to work outside, in space. The Glencoe kit's Bottle Suit comes with an astronaut figure, and it is actually from the size of this that we can be sure of the 1:72 scale.

I finished this version in white overall, with a simple R-1 marking. 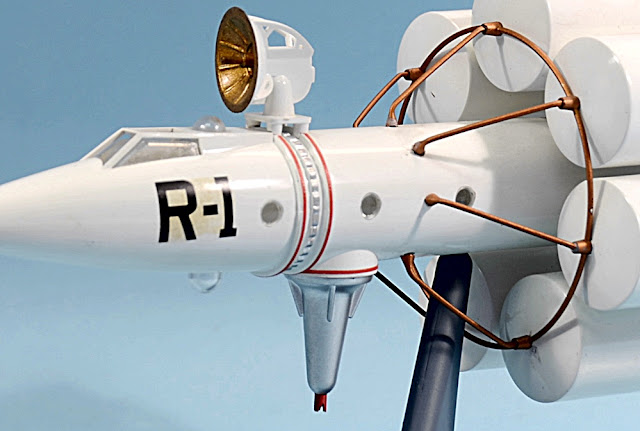 The Bottle Suit and astronaut figure (below) are shown undocked from their lower hull airlock ring. 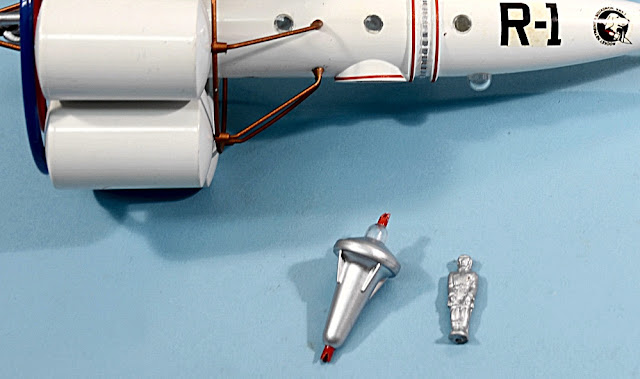 The instruction sheet for the kit includes a free plug (below) for my Scale Spacecraft Modelling book. 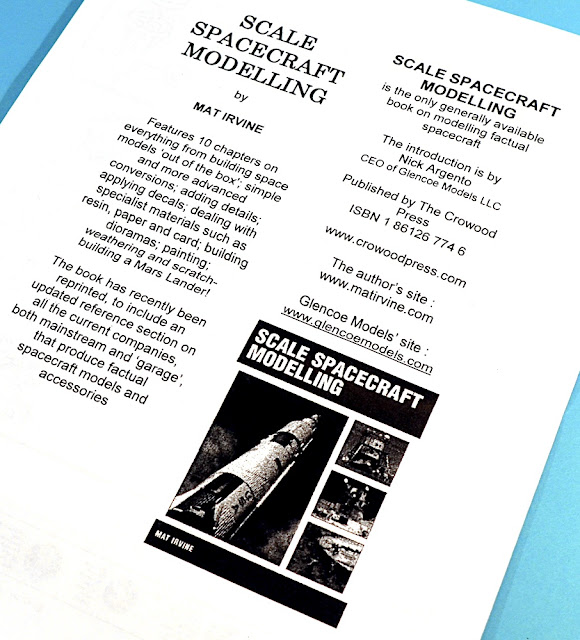 Box artist Ron Miller (below) holds an appropriate piece of auto-memorabilia, the high-style hood ornament from a 1950s-era Oldsmobile Rocket 88. 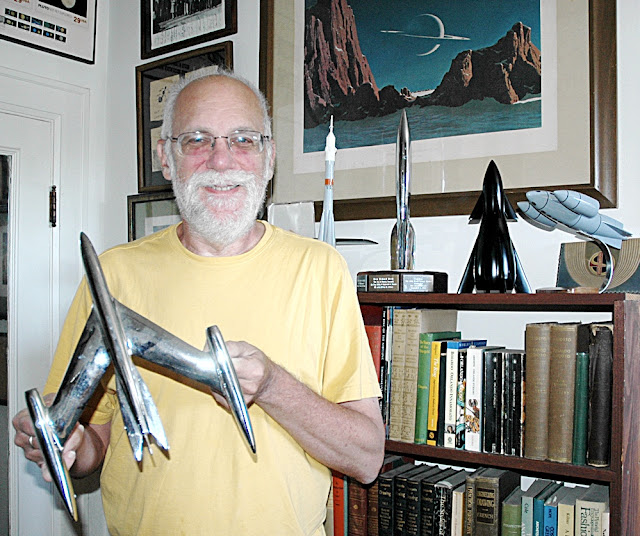 Collier's magazine ran many space articles and illustrations, including an issue showing the impressive moonship (below) about to touch down on a sturdy central support leg. 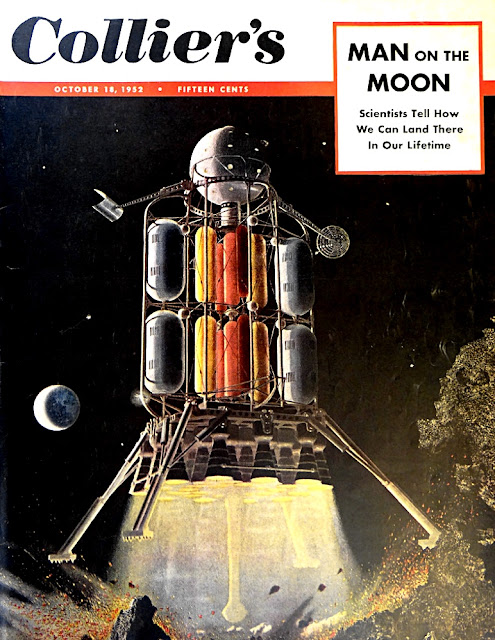 The spacecraft featured on the cover of Life magazine (below) in November, 1957. 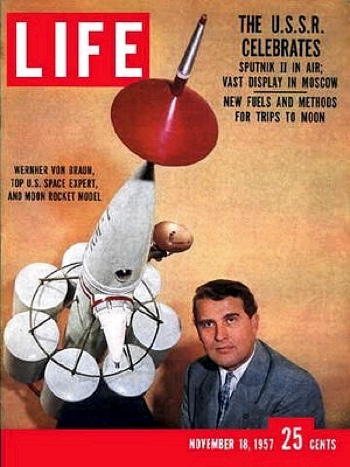 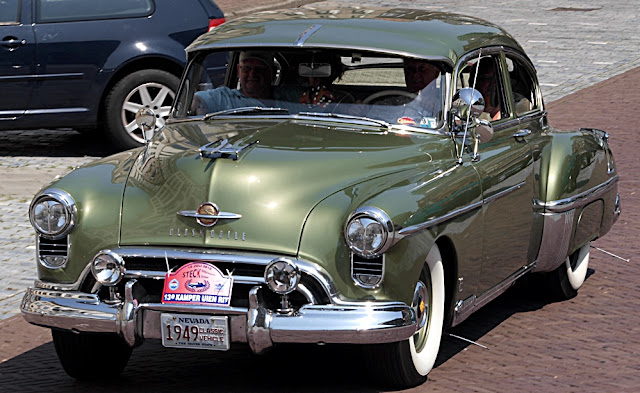 About the RM-1
The design was dreamt up by Wernher von Braun, before he went on to mastermind the US Apollo Moon landing program. The RM-1 appeared in the 1955 Walt Disney documentary Man in Space and was a factual approach that reflected a possible future reality. Power was to be supplied by a small nuclear reactor in the nose tip, while the four crew members were protected from radiation by the cone-shaped shield.

Summation
A classic original Strombecker kit that survives today, thanks to Glencoe Models. For the space enthusiast - particularly those with nostalgic tastes - the RM-1 Retriever Rocket is an essential buy. Assembly is not difficult, and the kit just begs to be built.

Kit supplied courtesy Glencoe Models. I am the Glencoe webmaster, so some of the images used here can also be seen on the website.