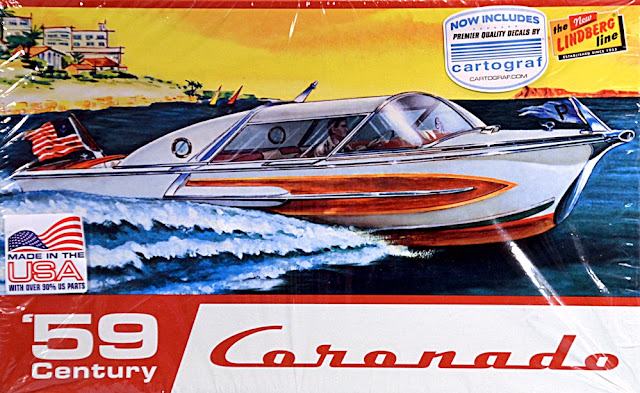 THIS IS AN INTRIGUING REISSUE of a 1:25 scale kit that has not seen the light of day since its original release in 1960.

Mat Irvine: I’ll say this straight away: the Century Coronado is not a very good kit, but it is one of the very few boat kits that fits with a 1:24/25 scale car kit collection. So it's well worth persevering with the build's idiosyncrasies, as you will end up with a unique model.

The box base (below) has a lot of printed information, and is a great help with the paint scheme. 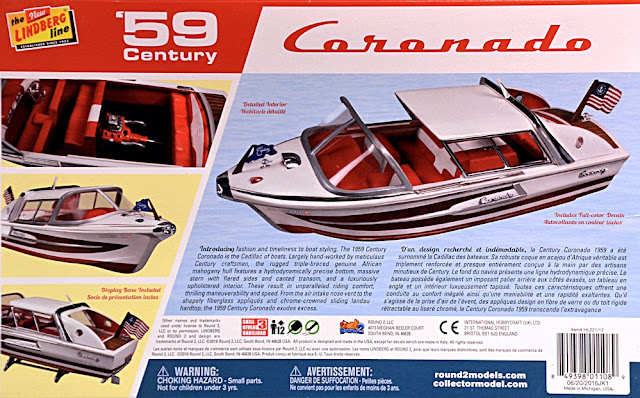 The kit originated from Palmer, which was a US kit company in existence around the same time as AMT and Jo-Han, also producing similar ‘annual’ car kits. But whereas AMT and Jo-Han models featured meticulously detailed bodywork and details, Palmer kits were - to be kind - not quite up to the same standard. For a start, Palmer still issued cars with multi-piece bodies, while most kit makers had phased these out long before.

The Century Coronado kit - now sold as a New Lindberg Line model - is moulded in white styrene, whereas the original was in white and brown. The original chrome-plated runner for the smaller parts appears again, as does the chromed cabin windshield surround. 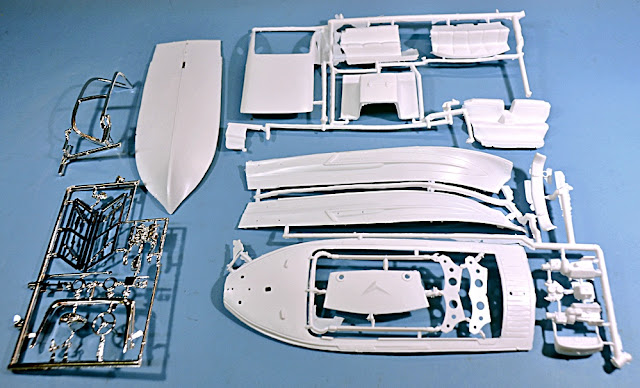 Good additions to the new Coronado are a Cartograf decal sheet, and an acetate sheet representing the window glass. The Palmer original had neither. But it did include a coil of rope to place on the engine hatch, and a length of flexible tube that could be used extend the exhausts out of the stern. Both are missing this time around, though either could be added without much trouble. The evocative original box-art is reproduced, although some may say that’s the best thing about the kit.

There is a lot, and I mean ‘a lot’, of necessary component cleaning up (below). This isn’t a fault of the tooling's age, even if it is nearly 60 years old, for the original was like that as well. Most edges need filing and sanding, and some sink marks have to be filled. The instructions indicate assembling the hull, but not the deck to make fitting the forward and aft seating easier. However, if you want to fill and paint the whole thing in one go, then go ahead and fit the deck. For final assembly, you can trim the seating as required to allow a good fit.

Closeup (below) of some of the flash you will find, though frankly there are modern kits which can be equally as bad. But the flash here is fairly easy to remove with a modelling knife. 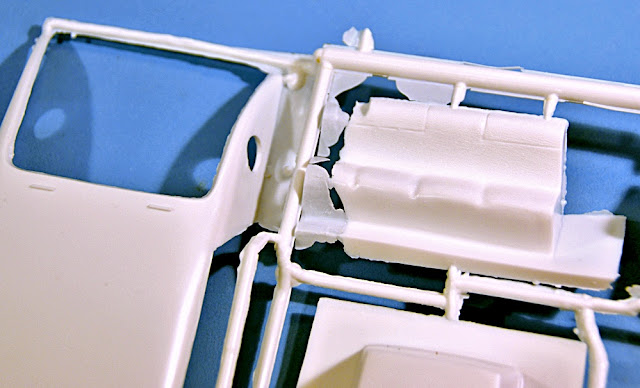 Original Palmer box (below) dates back to 1959. 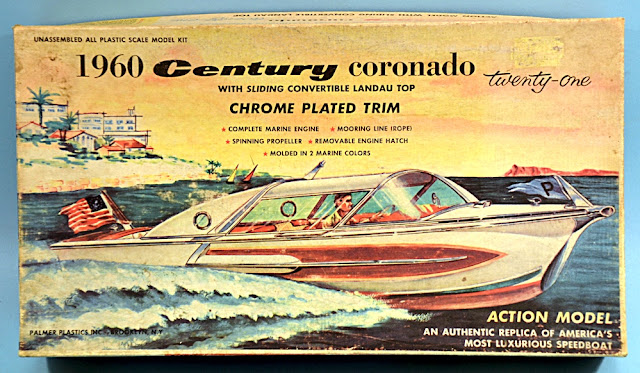 Boxes old and new (below). Note that whereas the new issue has the date at ’59, which was the first year for this shape of boat, Palmer called it a 1960 boat, perhaps because the year sounded much more up-to-date. 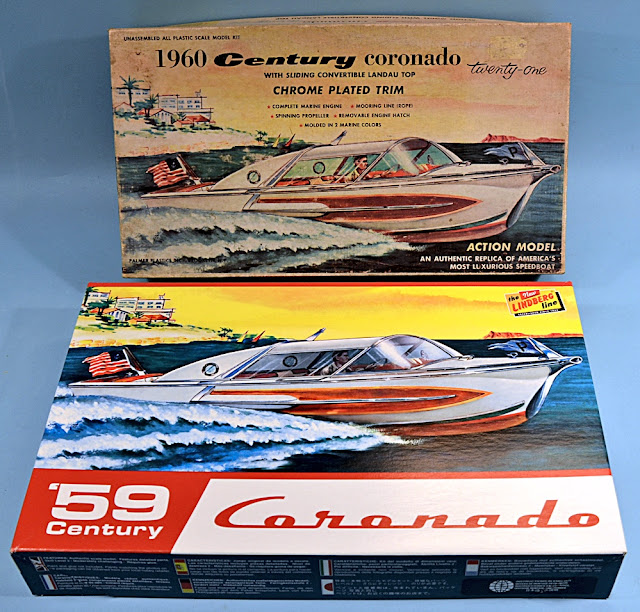 Parts (below) for the original Palmer issue. Note the brown components. 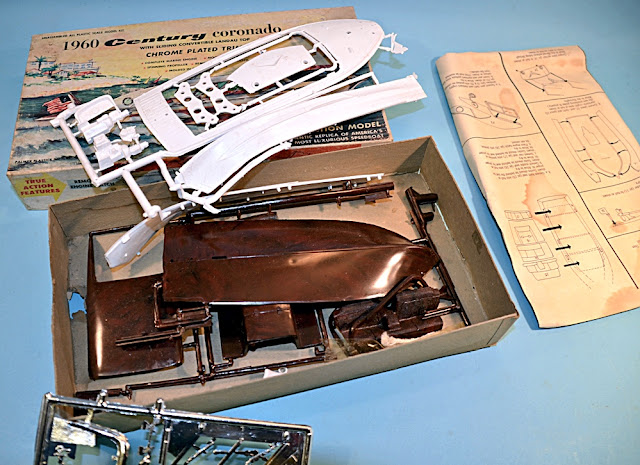 Palmer never placed its logo on box tops. It appears on this box as a discreet image (below) tucked away in a corner of a side panel. 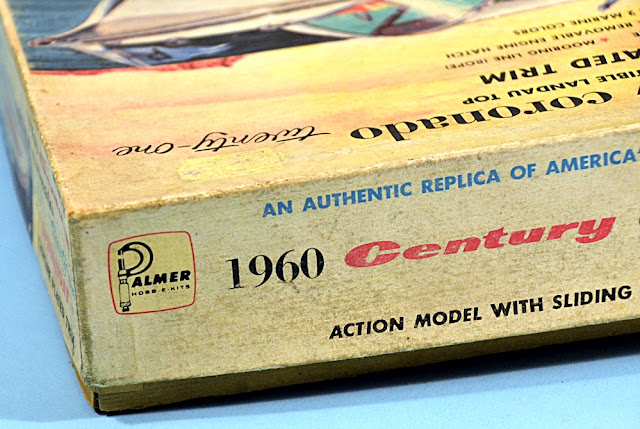 The Coronado has an inboard V8 engine (below) though again, don’t expect detail on a level with AMT or Revell. But as the engine is hidden under a removable cover, it needn’t be seen. You could even replace it with a more detailed V8 from a car kit if you like - there’s certainly room in there. 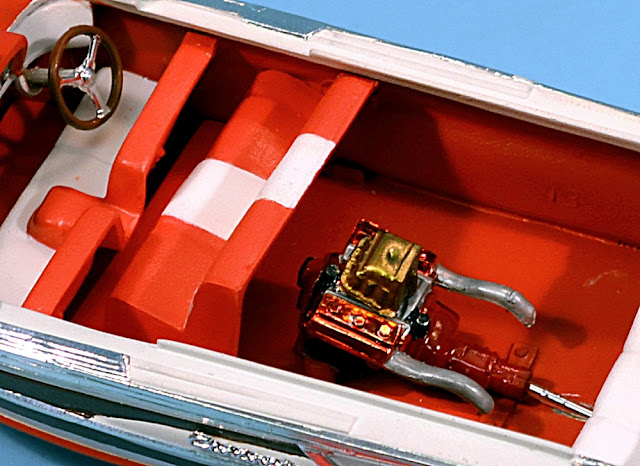 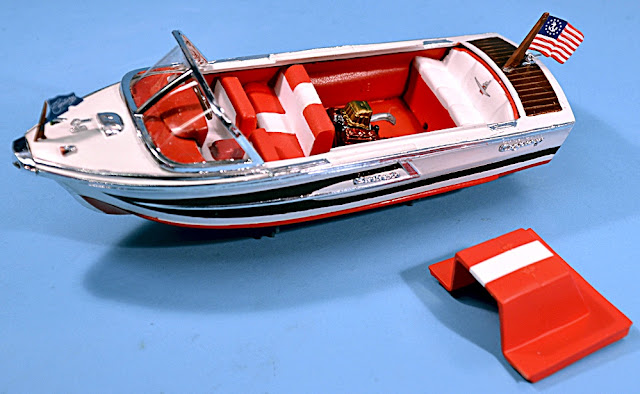 The glasswork comes in the form of a pre-cut acetate sheet, so there’s no fiddling to get it to fit. Most small details, such as the portholes and navigation lights, are on the chromed runner, though again you’ll have to clean up the flash. 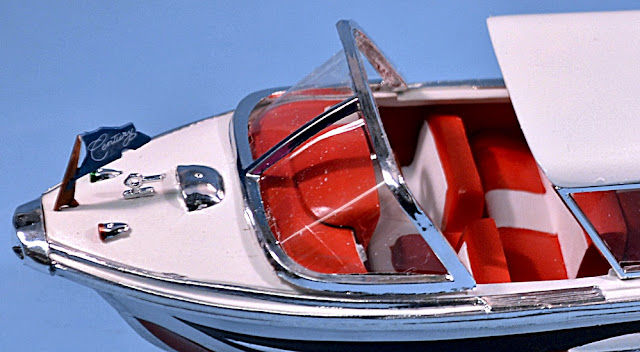 Assembly apart, most effort comes with the finish, and this applies whatever the shortcomings with the kit itself. These boats - the design dates from the late 1950s - were as garish as their automotive contemporaries, perhaps even more so. Photos of the Coronado often show more chrome than a 1959 Cadillac Eldorado Biarritz. If you want to match the box artwork, the paint finish will require a lot of masking. With a car kit, you may be doing one lot, possibly two, of masking. I found that the Coronado needed half a dozen.

First the easy bit, which is to paint the sliding Landau roof, for which I used Testors bright white spray. Then came the hull. First, I primed and painted it in the same Testors white. I then masked the exterior, and sprayed the interior matt red. The decking was then masked and the rear deck finished in Testors wood brown. Then the sides were masked, and the same brown applied to the trim down each side. 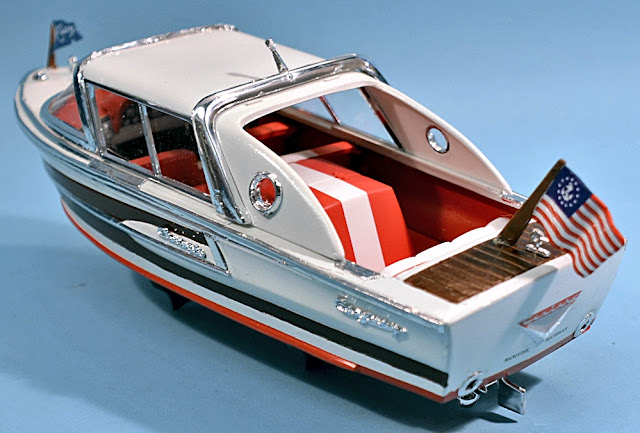 The whole was then masked, and the area over the dashboard sprayed with gloss Humbrol Ferrari red. Finally, I masked all the upper sections, and painted the lower hull and keel the same Ferrari red. And that was just the paintwork.

Next came the chrome trim, and I also used plenty of Bare Metal Foil to help finish this. But there are some neat touches in this kit, such as the four nameplates, two each for Century and Coronado. These are on the chrome runner and haven’t survived the years too badly.

I used a Revell Drag Boat/Hemi Hydro trailer (below) to display the Century Coronado. The two fit together nicely.

Summation
It took a lot of effort to make the Century Coronado look good, but was it worth it?

Well, yes. As I indicated at the beginning, 1:24 ‘car-scale’ boat kits are few and far between, and the Century Coronado is not included amongst the few that are kitted elsewhere, so you have an unusual model. A possible downside is that, unlike similar-scale boat kits from AMT, MPC, and Revell, the Coronado has no included road transporter-trailer, just a display cradle. But as it almost exactly fits the Revell Drag Boat trailer, that’s an easy fix, if you need it.

History lessons
Palmer existed as a separate company until around 1975. But at some point, much of the tooling was acquired by Pyro, and Pyro, later Life-Like, was then acquired by Lindberg. The sale presumably included Palmer’s boat kits, though neither Pyro nor the original Lindberg company ever issued them. Palmer is listed as making three similar-scaled boats, though the other two, the Owens Outboard Cruiser and Evinrude Dreamboat appear to be to a smaller scale, maybe 1:30. Round 2 plans to release the Owens, and I’ll be particularly interested in this, as although I have an original Palmer Century Coronado, I’ve never seen the Owens.

The Century Boat Company was founded in 1926, and has been making leisure and power boats ever since. In the 1920s, the Century Hurricane held the world speed record for outboards, at 50.93 mph (81.96 km/h). Century is now based in Florida, and you can visit the company site here.

Thanks to Round 2 Models for the sample kit.