A BIG KIT OF A SMALL MACHINE: ISETTA BUBBLE CAR FROM REVELL 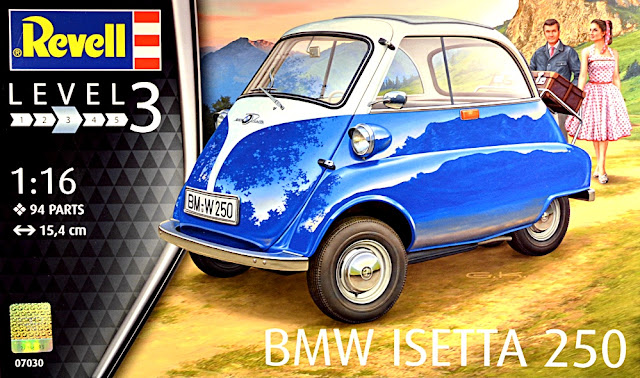 A DELIGHTFUL 1:16 SCALE REVELL BMW ISETTA 250 bubble car kit. It recalls a time when such super-small cars were all the rage in Europe.


Mat Irvine: When Revell Germany first announced this kit, I suspect many model makers thought it would be a new version of the older 1:24 scale Gunze Sangyo kit. But no, this is a completely new-tool product, and is made to the considerably larger 1:16 scale.

The original ‘bubble car’ design was created by the Iso company of Italy, in the early 1950s. The car was licensed for manufacture in several countries, including Belgium, Brazil, Germany, Spain, and the UK. Appropriately, this Revell kit features a BMW version, built in Germany.

The bottom of the box (below) has information and useful photos of an assembled model. 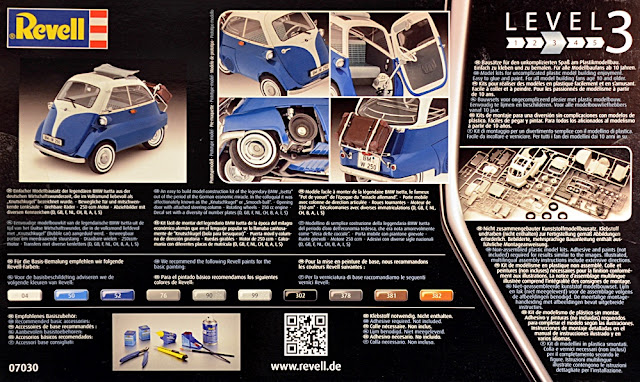 The Revell BMW Isetta 250 kit is moulded (below) in white, duck-egg blue, and light grey, plus chrome and transparent components. Even to 1:16 scale, the Isetta is no bigger than, and indeed smaller, than some 1:24/25 scale conventional cars. 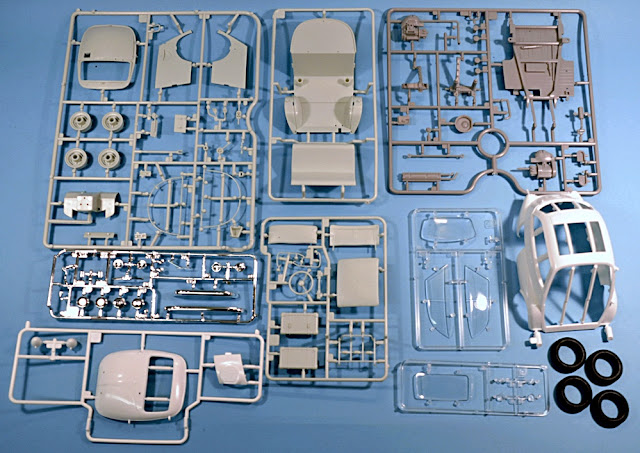 The comprehensive decal sheet (below) includes seat patterns - the two checked rectangles - and white walls for the tyres. There are number plates for nine European countries, including the UK. 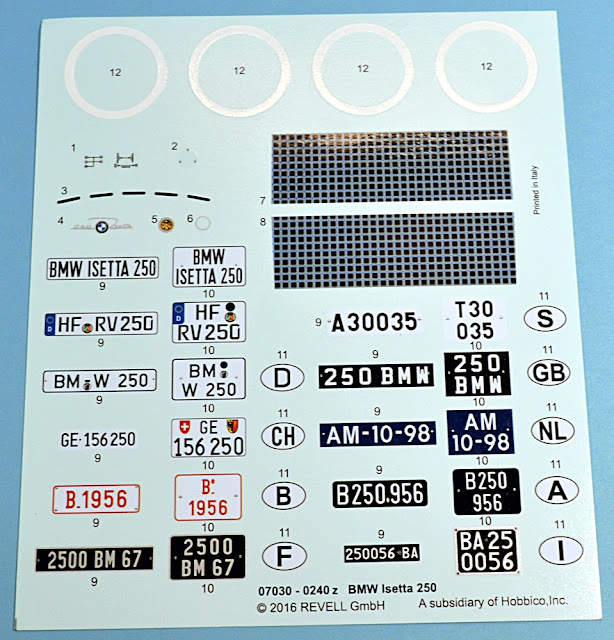 Although the Isetta was classed as a three-wheeler, it actually had four wheels (below), the rear pair being close-coupled. In fact, early versions did have just three wheels, but were more prone to tipping over when cornering. 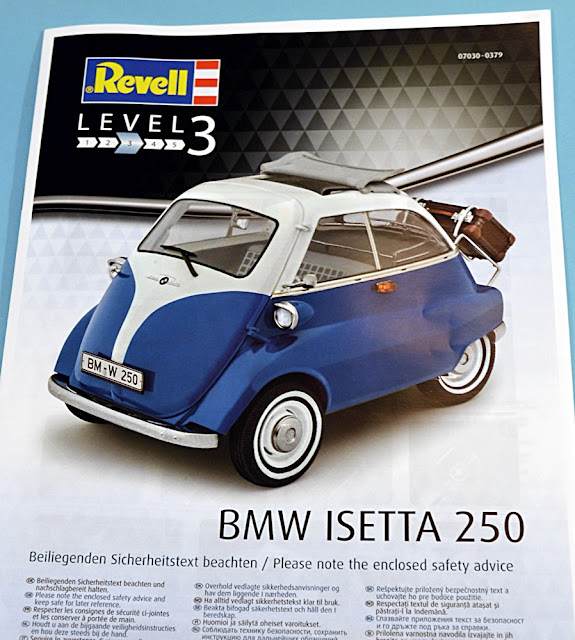 The instruction booklet (above, below) is well up to the usual Revell standard. 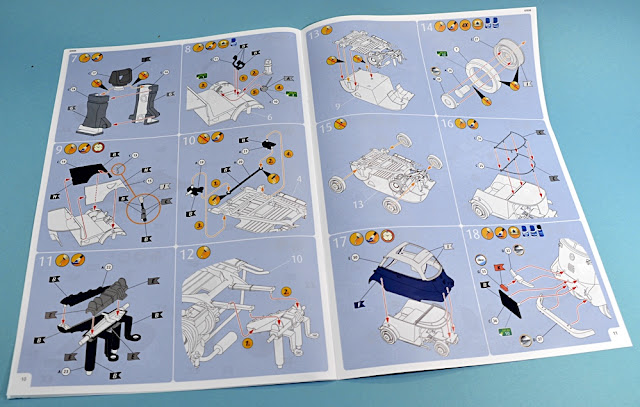 The Revell BMW Isetta 250 has an important working feature in the form of the single door which forms almost the whole of the front. It opens wide, the steering column authentically swinging to one side, just like the real thing. Revell has also included the tiny single-cylinder engine, and a retro-look leather suitcase that fits on the rear-mounted luggage rack.

The picture (below) was taken on the Revell stand at Scale ModelWorld 2016. 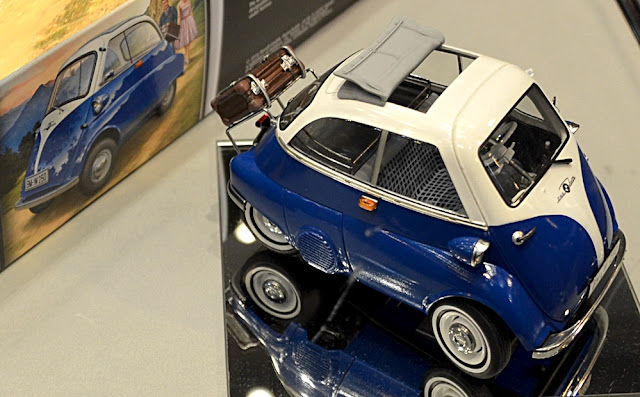 The cutaway view (below, from a contemporary magazine) shows the power pack positioned at the rear. Twin wheels, fuel tank, and side-mounted engine were all placed behind the seat. 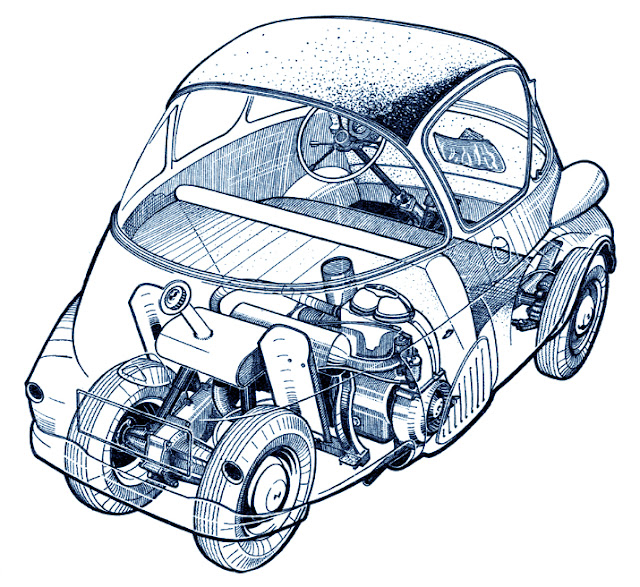 An Isetta displays its front-opening single door (below). Note that for left-hand drive markets, cars had the door and steering wheel swapped across the cabin. 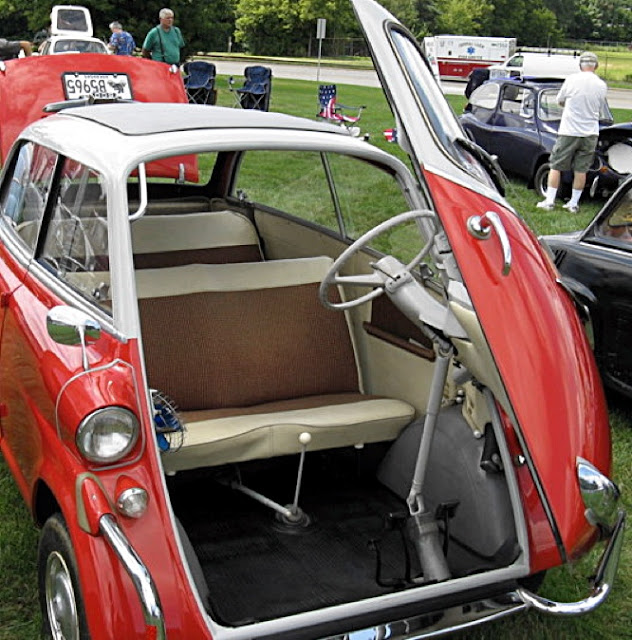 Watch out for a detailed build at SMN.

SMN note: Here's a retro-look challenge for kit-bashers (below). It's a Spanish-built Iso Autocarro pickup truck, dating from the late 1950s.