DIORAMA LOVERS LINE UP HERE to get your hands on this neat 1:48 scale kit from Tamiya. It combines two World War II kits, together with a simulated-grass covered rectangular base.

SMN report: This all-in-one kit is a neat idea from Tamiya. In the box are a 1:48 scale World War II fighter, a matching four-wheel drive military vehicle, a plastic plinth, a grass-effect sheet, and three figures. 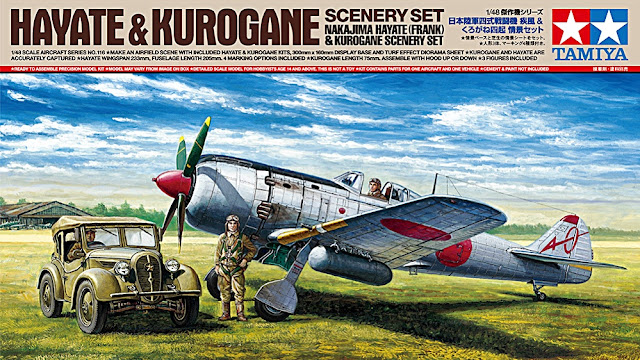 The aircraft is a Nakajima Ki-84 Hayate single-seat fighter interceptor, with a canopy that can be assembled in the open or closed position. The decal sheet has four marking options. The Hayate (Allied codename ‘Frank’) is reckoned as one of the best Japanese World War II fighters, with more than 3500 being built. It was fast too: in a dive, a Hayate could hit nearly 800 km/h (496 mph).

The kit meets Tamiya’s usual high standards (below) with underwing tanks, positionable canopy, and main gear oleos all there and accurately modelled. As you can see from the pictures, a light touch of weathering works wonders for the final effect. Engine exhaust streaks and splashed mud on the wheel covers really help. Actually, we’d add a little more dirtying up, especially to the scout car - after all, it does depict a four-wheel drive off-roader. 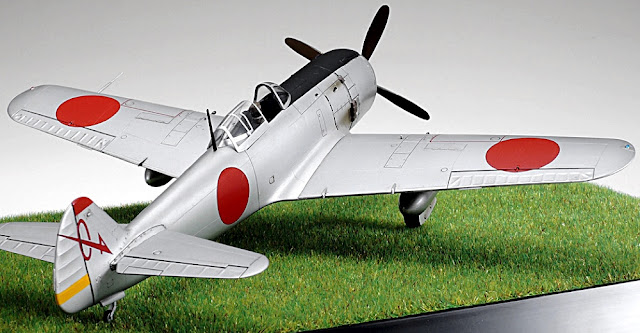 The Tokyu Type 95 Kurogane three-seater scout car (below) can be assembled with the soft top open or closed. Tamiya has added a neat metallic decal for the Imperial Japanese Army five-pointed star that adorns the radiator grille. Incidentally, the Kurogane is claimed as the world's first practical four-wheel drive vehicle, predating the famed Jeep. Nearly 4800 of the three-seaters were made, from 1935-44.

The kit comes with a trio of nicely sculpted figures, a driver for the Kurogane, with standing and sitting pilots for the Hayate. 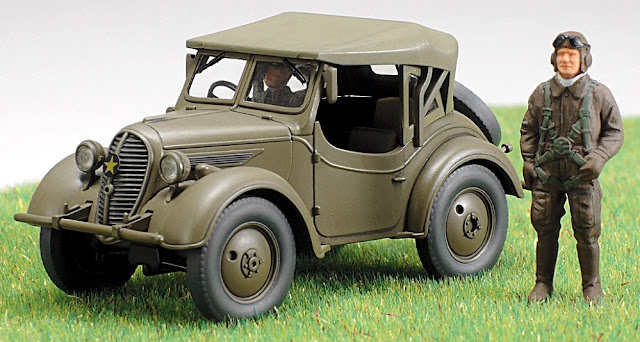 The display base (below) has a scenery sheet which lays on top, and depicts the grassy surface of a typical airfield. The sheet is pre-cut to fit, so knifework is not needed for base assembly. 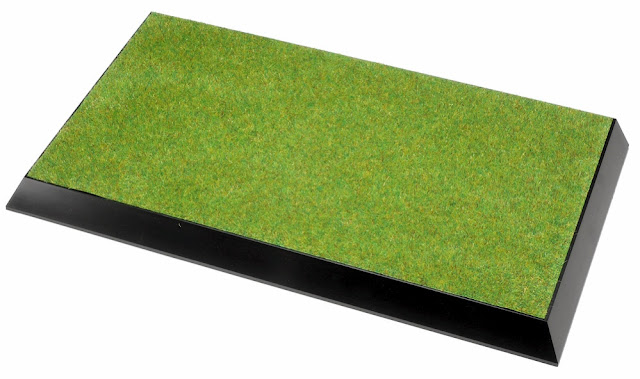 A neat diorama that has been well produced by Tamiya in typically efficient and accurate fashion. If you are into dioramas and World War II Japanese aviation, the kit should be high on your list of 2017 must-builds.