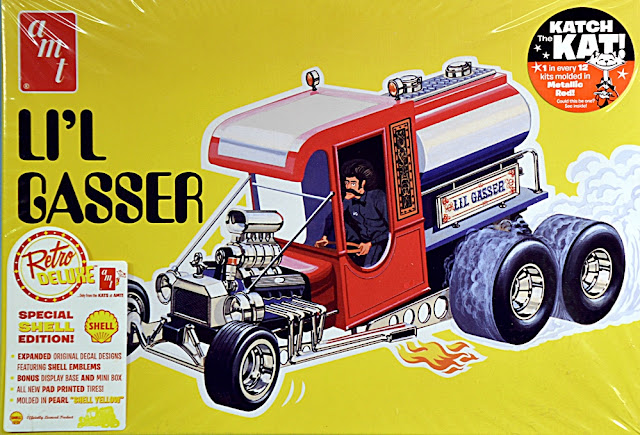 THIS IS A REISSUE OF AN AMT classic show rod, as designed by John Bogosian, in 1970. Li’l Gasser was one of four kits based on the same six-wheel chassis and running gear.


Mat Irvine: Although the 1:25 scale Li’l Gasser is essentially the same kit that was issued way back when, this new version has changed somewhat. As with other recent Round 2 reissues, you get far more in the new version.

The new box (header pic) uses the original artwork, with ‘Retro DeLuxe’ and ‘Katch the Kat’ stickers on the shrink-wrap. The side panels (below) depict some features of the kit.

New items include tyres that have been replaced with new-tool versions, complete with highly desirable pre-applied lettering. Then you get two sets of transparencies, the original clear and for this kit, a duplicate set in smoke-grey. There is also a new and comprehensive decal sheet, plus a card diorama on which to place the finished model. A card cut-out figure of John Bogosian is also included. 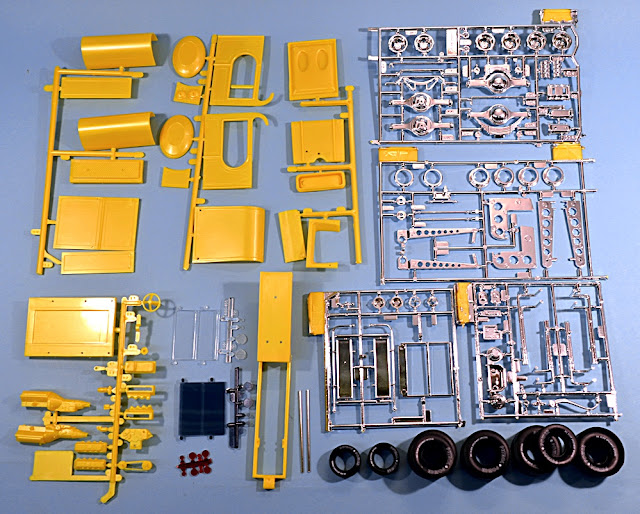 Assembly is straightforward with Li’l Gasser. The cab is a multi-piece unit as all sides are flat, and the decal sheet provides two alternative finishes for the roof. The whole reason for the kit - the gas tank - is composed of four components, with a four-part base, plus top fillers and control valves for the rear.

To the finished kit you can add as many decals as you like from the wide variety of names and logos supplied on the excellent sheet. Other paperwork supplied includes a miniature version of the kit box (below, upper left). 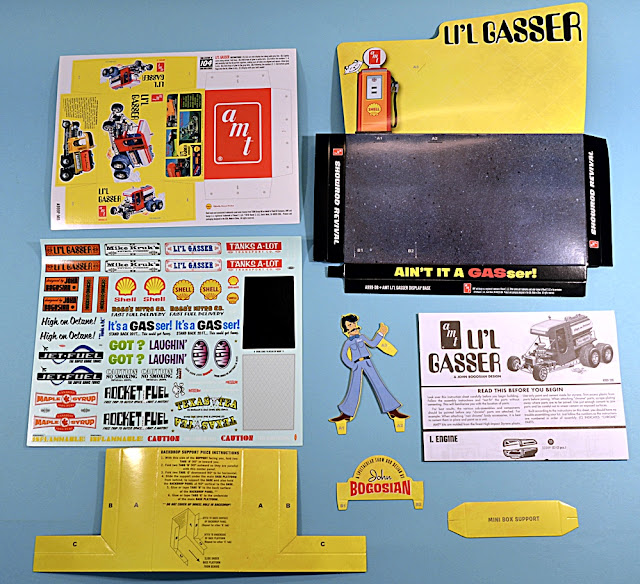 Sub-assemblies (below) include the cab, engine, and 'rocket fuel' tank. 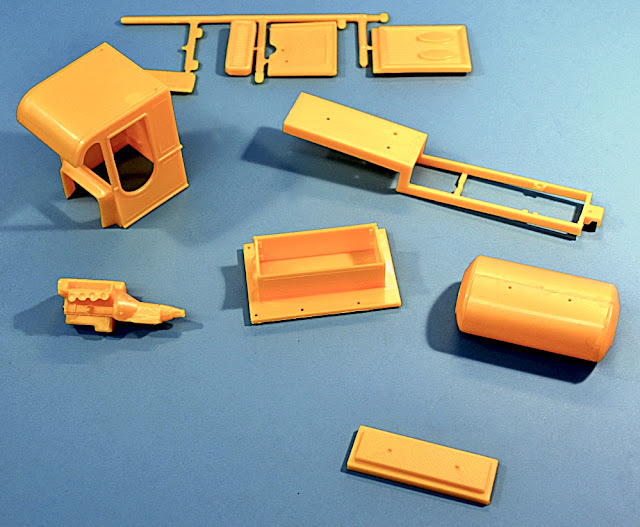 Subassemblies (below) in their near-finished state. Note that I added electrical system wiring to the engine, a neatly reproduced SOHC Ford V8. 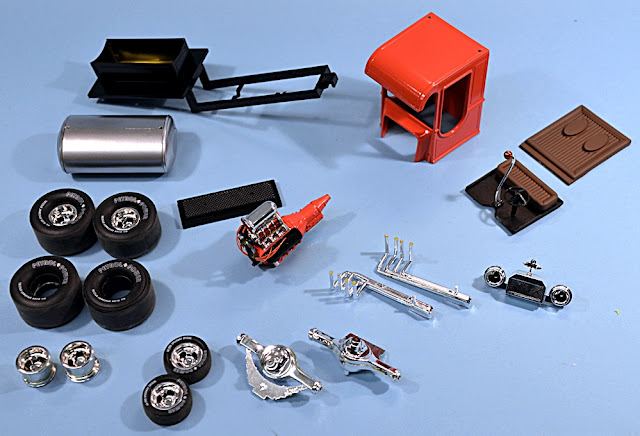 The two rear axles are simply two halves with springs built in, and there are six radius rods, two for each axle. 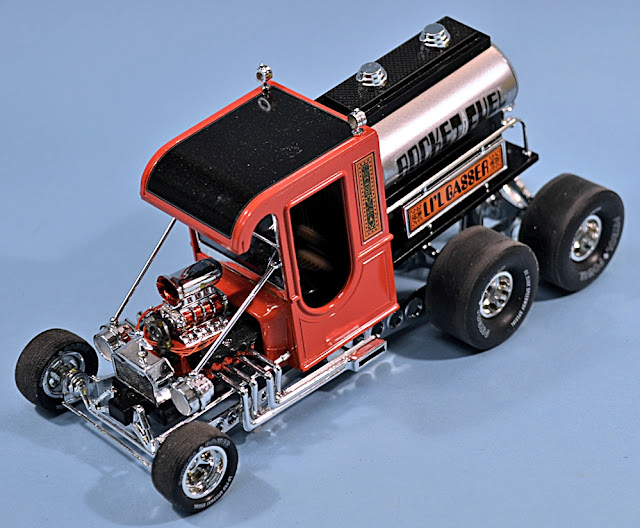 Li’l Gasser is one of the Round 2 ‘Katch the Kat’ models, where one kit in every dozen is moulded in a different colour. Apart from its Retro De Luxe label, the kit is also tagged as a ‘Special Shell Edition’ meaning that most kits - including the one I built - are moulded in pearl finish Shell-yellow plastic. The elusive twelfth 'Kat' kit is in metallic red, which is of course the colour of the model shown on the box, with designer John Bogosian in the driving seat.

The completed model (below) with just a few of the available decals applied. Note the text on the rocket fuel tank, which reads: ‘To the Moon Alice!’ and ‘Free trip to outer space. Light a match!’ 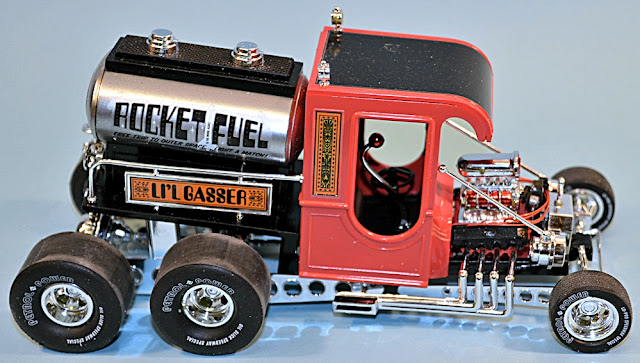 Incidentally, the other six-wheel John Bogosian creations are the Li’l Mixer, a cement mixer, Li’l Yeller, a school bus, and Li’l Cashbox. This last is an armoured security van, and is the rarest of the four. 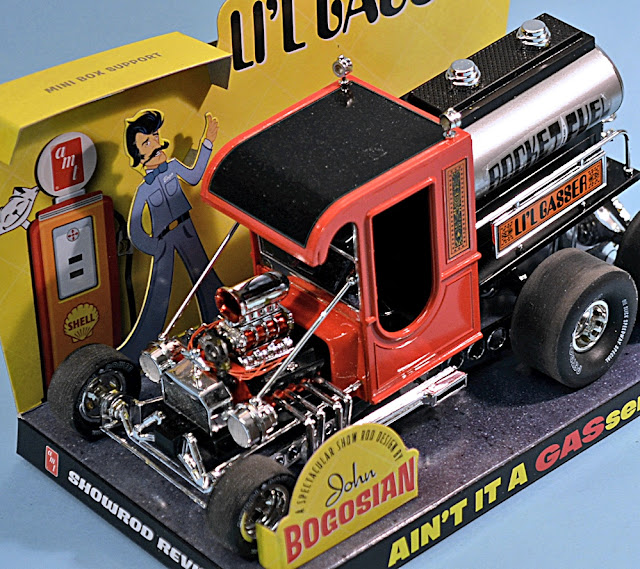 The model is a tight fit on the assembled diorama base (below) but looks really good, the plinth adding a little height and extra display presence. 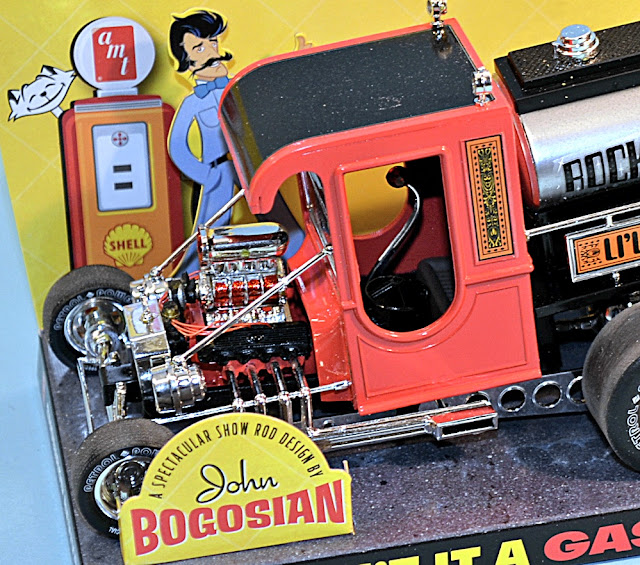 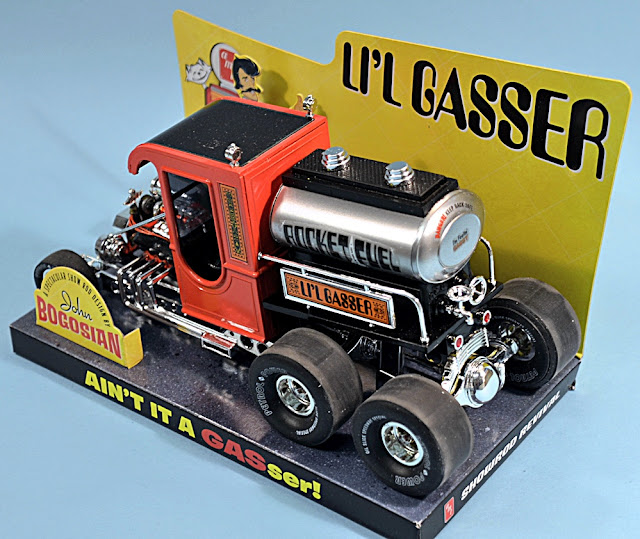 The supplied cartoon figure of John Bogosian, seen (below) with AMT/Shell pump and a smiling Kat. The figure is more or less to scale with the truck. 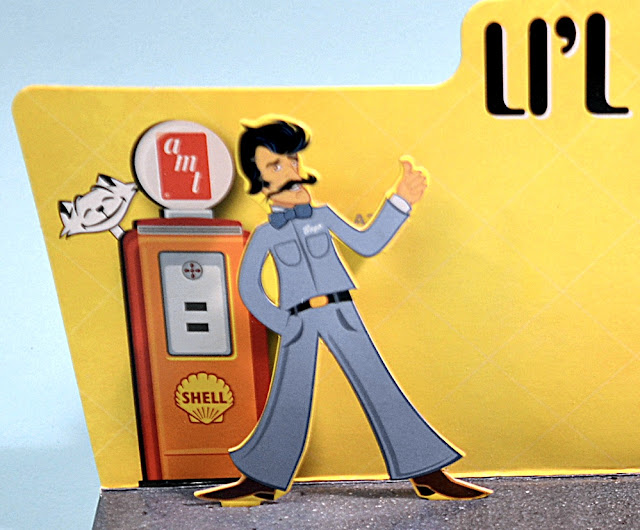 Two previous issues of the same model (below), the MPC version (upper) dating from 1987. The AMT Buyers Choice dates from 2002, and was slightly odd as the kit contained parts from other Li’l kits. In the box were some Li’l Mixer parts and a chrome-plated runner from the Li’l Yeller school bus. 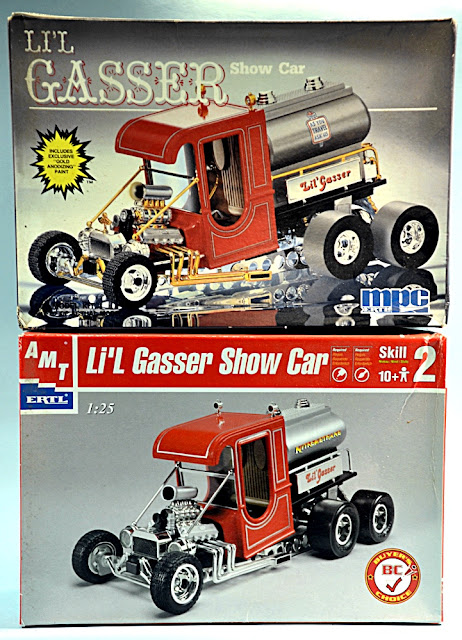