GET YOUR KICKS - AND TINPLATE TRUCKS - ON ROUTE 66 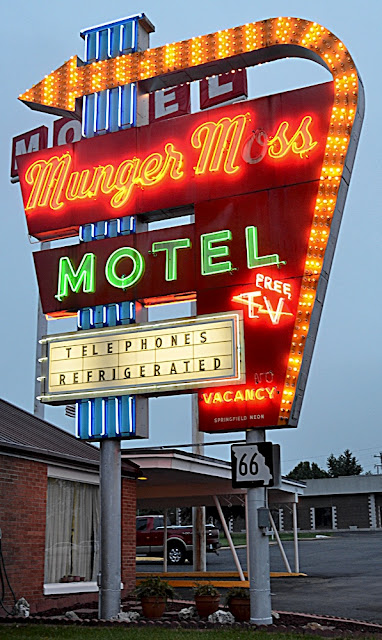 A TRIP DOWN ROUTE 66, the famed 'Mother Road' highway that runs from Chicago, Illinois, to Santa Monica, California, reveals an unexpected home for a treasure trove of tinplate trucks.

Mat Irvine: I stopped at the Munger Moss Motel in Lebanon, Missouri, a while ago. And found that the lobby was filled with a great display of Route 66 retro-Americana, in the form of shelves loaded with tinplate trucks. Here are some of the pix I took of my unexpected find.

Plenty of souvenir cards to buy (below) in front of those tinplate trucks, which were display items and not for sale, more's the pity. 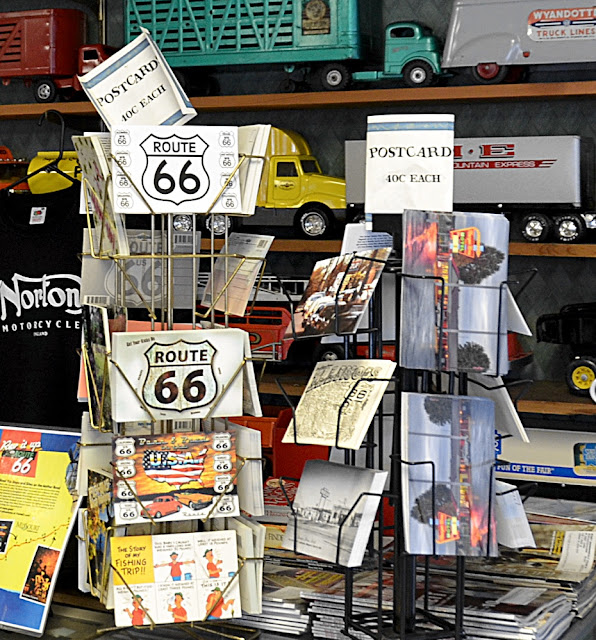 One of the best - or at least, most interesting - motel lobby areas (below) I've seen on my travels. 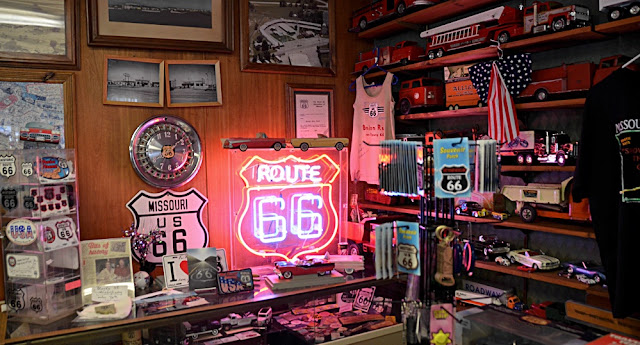 A lone Brit in the form of a Norton motorcycle t-shirt (below right) hangs in the lobby display. 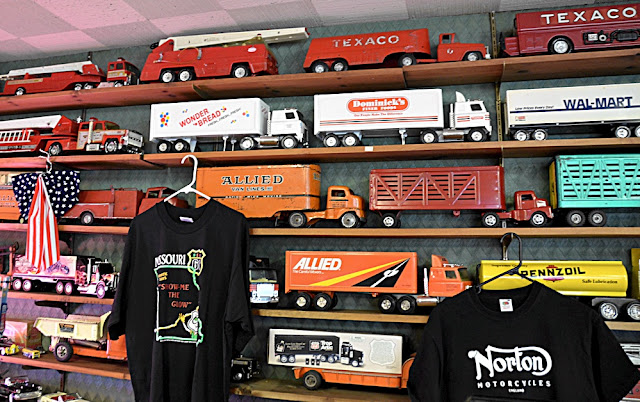 A scale Australian Road Train (below) parked in front of two early photos of the Munger Moss Motel site. 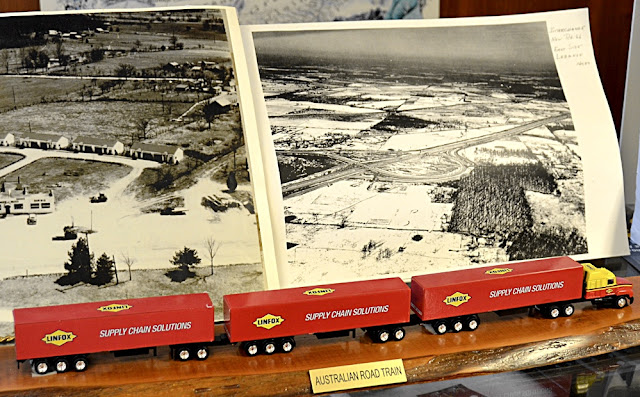 Some of the tinplate trucks on display (below). Most are generic designs, but traces of Ford and Chevrolet can been seen. The US Army truck is hooked up to a working toy searchlight. 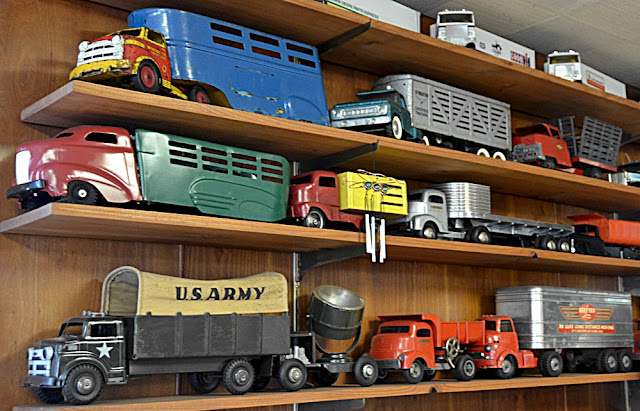 They all look good, but the double-deck vehicle transporter (bottom right) is interesting, as it compares to the excellent Dinky and Corgi diecasts of a somewhat later period. 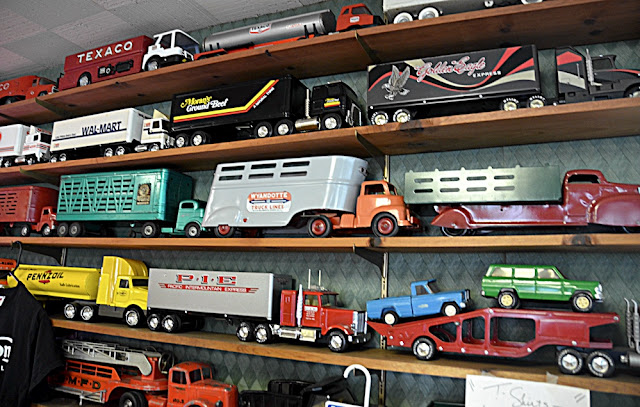 A Mack truck (below left) plus Model A and T Fords (below right) are parked each side of somewhat older forms of transport.

Ford convertibles are lit attractively by a glowing neon sign (below). The diecast model is to 1:18 scale, the card model about the same. It seems to be an early Thunderbird, note the spare tyre at the tail end. 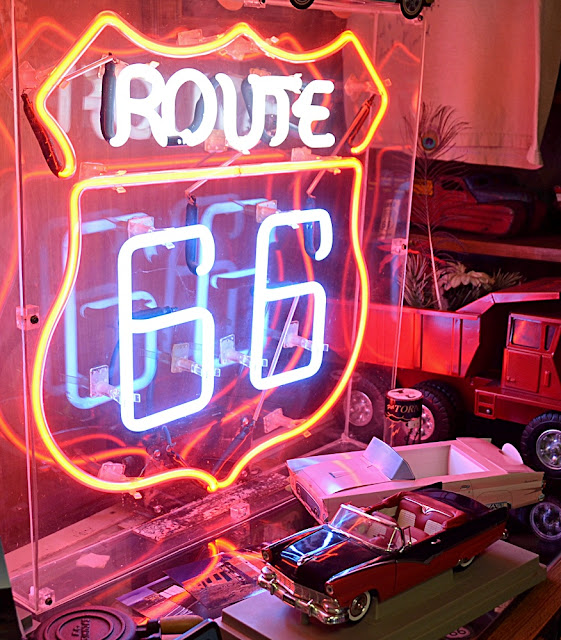 The 1960 Chevrolet Corvette (below) is another card model I saw on display. 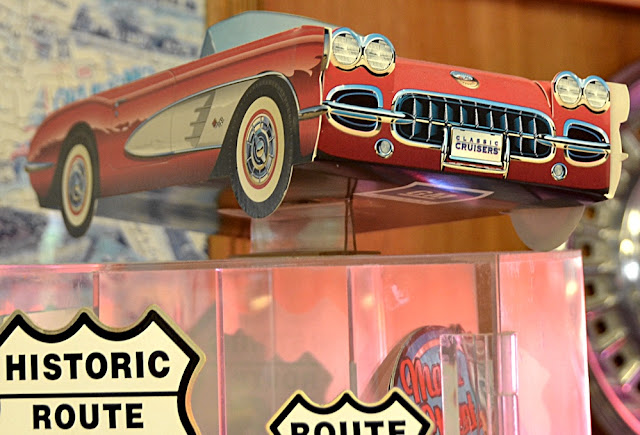 Certificate to 'Two of the best friends the Mother Road has known...' from the Route 66 Association (below). Those friends are Munger Moss owners, Bob and Ramona Lehman, who still run the place. 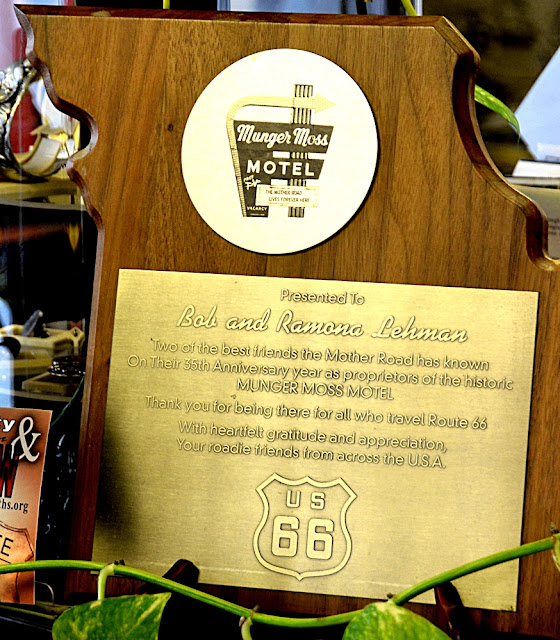 If you plan to motor west and get your kicks on Route 66, then click here to visit the Munger Moss Motel.

SMN note: Aaah... sweet nostalgia! And for an old-style rock-n-bop with plenty of Route 66 photos, you can play the movie (below) from YouTuber David Smith. Oh, and here's a tip - turn your speakers up, as the mov's backed by a really good rendering of the famous song.