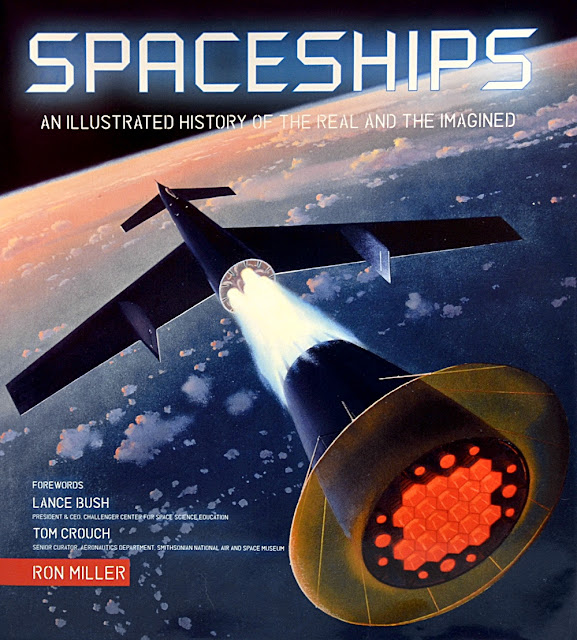 SPACESHIPS IS A SUMPTIOUS new book by the space artist Ron Miller. It contains much that is interesting to space model fans.


Mat Irvine: A year or so ago I was contacted by an old friend in the US, the space artist Ron Miller. He asked me for some spaceship model pictures - both real and science fiction - that he might use in a new book on which he was working.

I sent a selection to Ron, and they feature in his latest book Spaceships: An Illustrated History of the Real and the Imagined. It’s a full-colour title, unlike Ron’s earlier black-and-white The Dream Machines which took a detailed look at every crewed spaceship ever envisaged, some of which go back centuries.

The front cover (header pic) features a painting by famed space artist, Chesley Bonestell. It shows a three-stage rocket in Earth orbit. The back cover (below) is just as interesting. 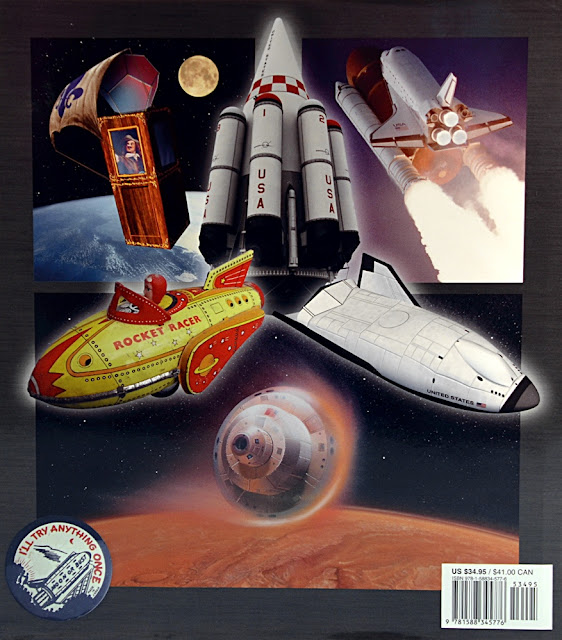 Spaceships is packed with fascinating information, such as the chapter on engineers. This includes Mr Golightly (below) who was the supposed inventor of a rocket device. One of my photographs is used of a life-size Golightly that I built for the One Small Step exhibition, which toured the UK.

More on the One Small Step exhibition here. Go to the page labelled Model Making and Supply Services. 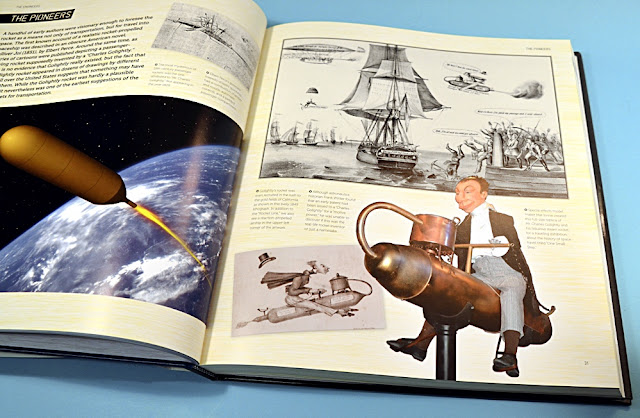 The rocket pioneers Konstantin Tsiolkovksy and Robert Goddard get their own pages in Spaceships, as do early rocket societies in Germany, the US, and the UK. Also featured are scientists and engineers that worked in early cinema productions, especially Herman Oberth with the classic Frau in Mond.

Early screen pioneers (below) include a spaceship used by the space hero, Flash Gordon. The craft had also been used in an earlier movie Just Imagine of 1930. 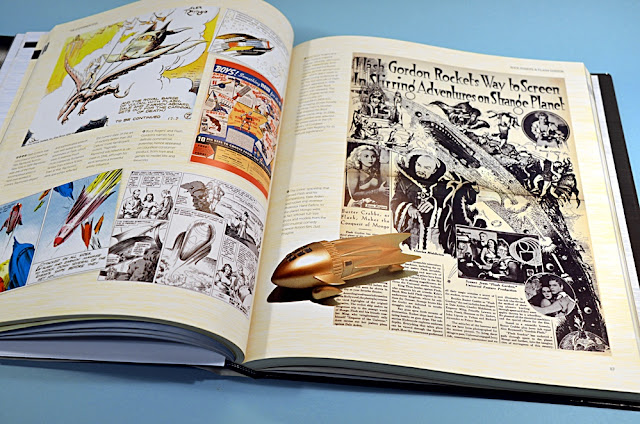 Some of the models (below) used during production of the 1950 movie Destination Moon. 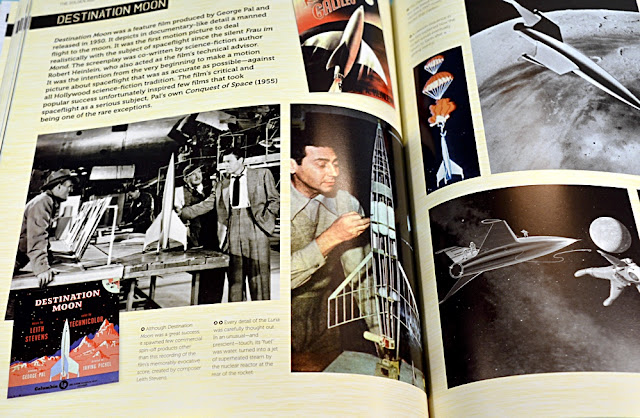 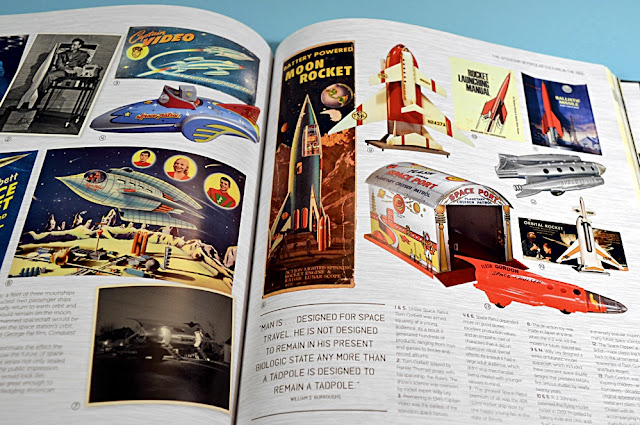 With World War II, Ron covers more rocket developments - including of course, the V-2 - and then we enter what he describes as a golden age, the 1950s. Here you can read about the Collier’s magazine series of articles on space (below) as conceived by Wernher von Braun and Willy Ley.

Feature pages on Disney’s Man in Space TV show, with details (below right) on the RM-1 rocket. 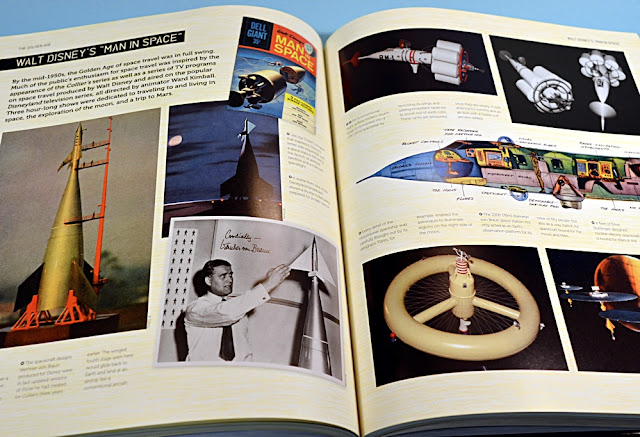 Spaceships has pages on Kraff Ehricke, and models of his design for Revell. There’s also Ellwyn E. Angle, who invented scale modelling’s most famous factual-futuristic space ship, the XSL-01 (below left). Also in the book are well-known names from comic books, such as Tintin and Dan Dare. 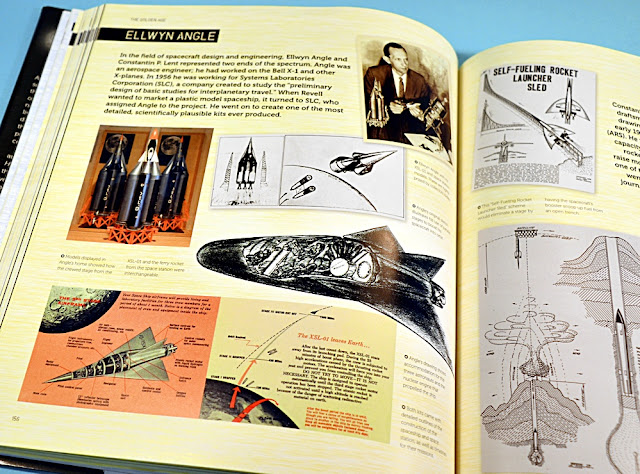 The TWA Moonliner (below) which featured in 1:3 scale at the original Disneyland, California. The image, bottom right of the left-hand page, shows the rocket lit up on the launch pad. The original model shot is mine, Ron added a digital background and lighting effects. 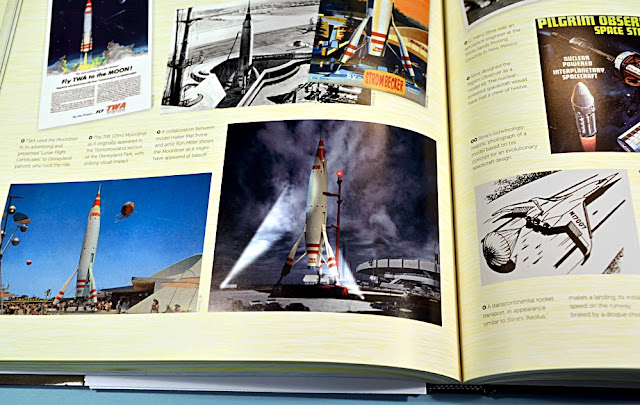 Ron Miller (below) holds the hood ornament from a 1950s Oldsmobile Rocket 88 automobile. 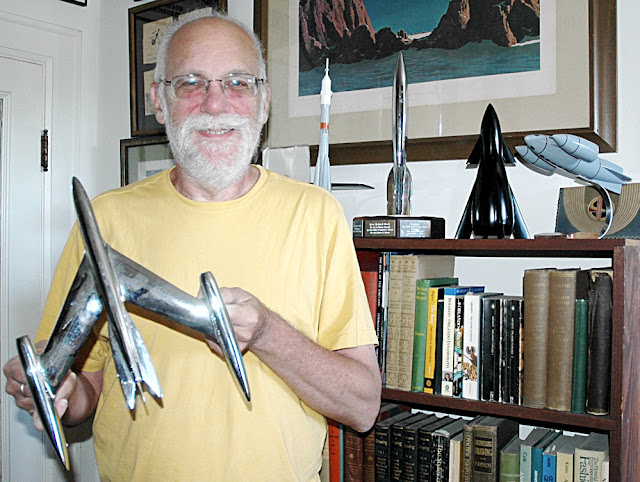 Summation
Spaceships by Ron Miller is a picture-packed book that you can dip into constantly. You’ll find something new and interesting each time you do so. Highly recommended.