DOWN IN THE PIT, A GHASTLY CREATURE STIRS... 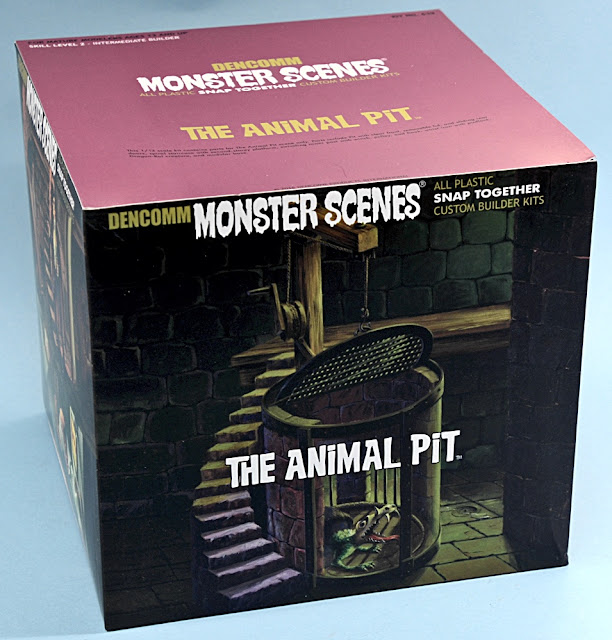 IT’S NOT OFTEN YOU CAN ANNOUNCE a kit that was created in the 1970s, but that has not been issued until now.

Mat Irvine: Well, that is the case with the Monster Scenes Animal Pit, a kit that for various reasons, has not been released before. Now, thanks to kit-maker Dencomm, the Animal Pit is available to purchase. A new-tool clear component has been added, but otherwise the kit is just as Aurora intended. The Dencomm box (header pic) is a simple cube, unusual in the kit industry.

All Aurora Monster Scenes were snap-together kits, and this diorama is no exception. However, some parts benefit from using cement to keep them firmly together. And as the Dencomm components (below) are moulded in pink plastic, it also benefits from being painted. 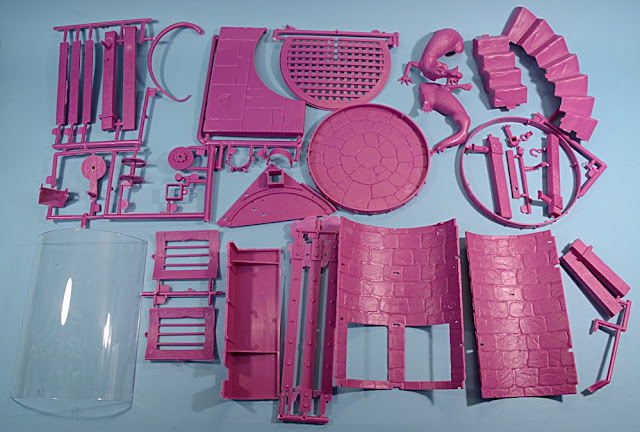 Farewell to that unlikely shade of pink (below). I have applied initial coats of paint to the subassemblies. 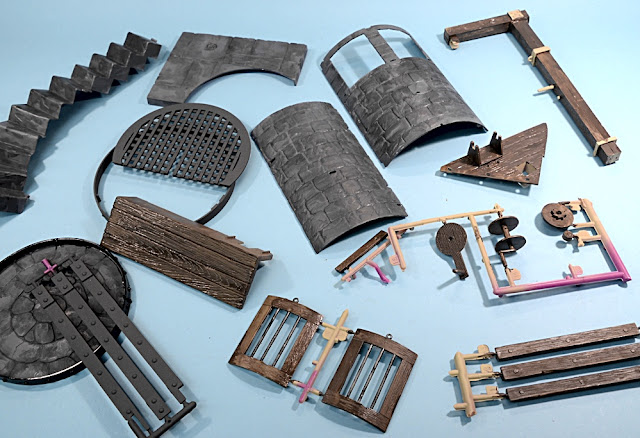 There are working features, with two grilles that can be raised by the top winch, for which simulated rope (below) is supplied. The grating at the top can also be raised, via another winch. 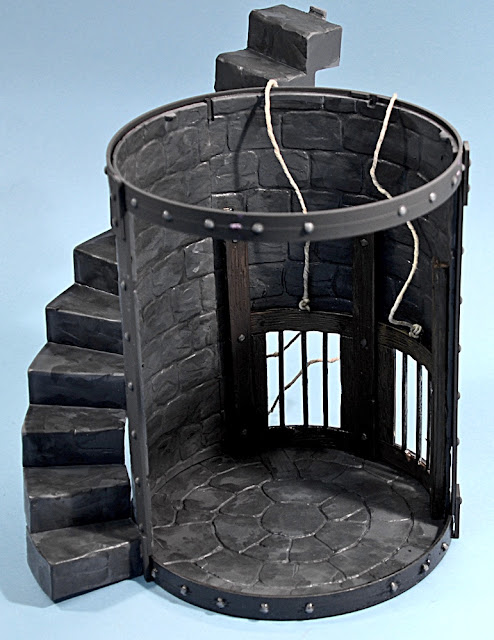 The finish of the assembled Animal Pit is wood and stone, with some metal, so it was an ideal chance to practise my weathering skills. The whole kit was coated in Humbrol acrylic grey primer, then hand-painted with different greys for stonework, brown for wood, and metallic steel for metal. Then the weathering proper could begin, with washes of other colours, plus dry brushing. Mig Natural Effects Earth and Slimy Grime were liberally applied. The latter seemed particularly appropriate. 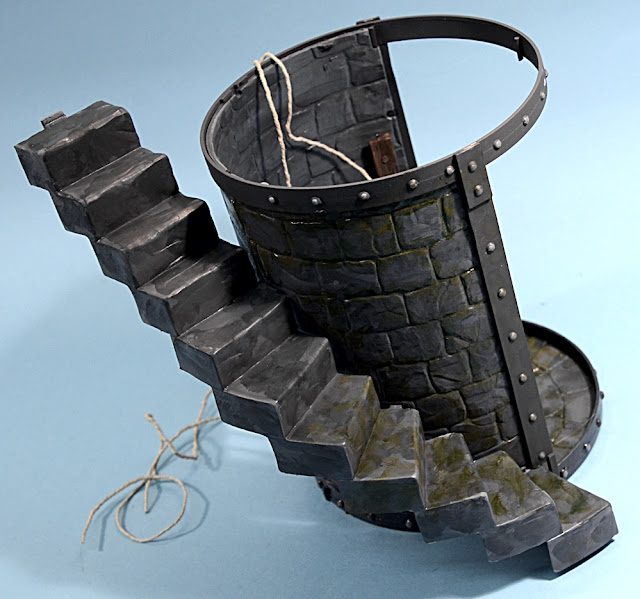 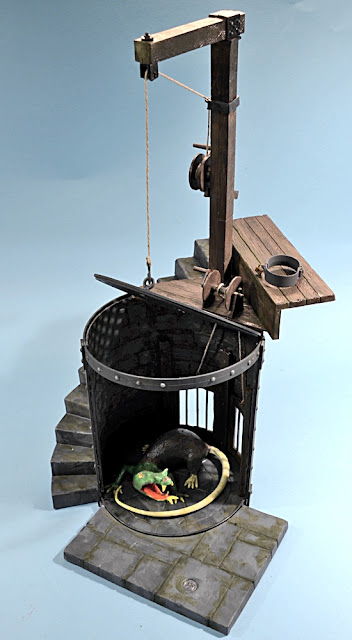 Closeup of the animal lurking in its pit (below). It's a sort of rat-dragon hybrid. 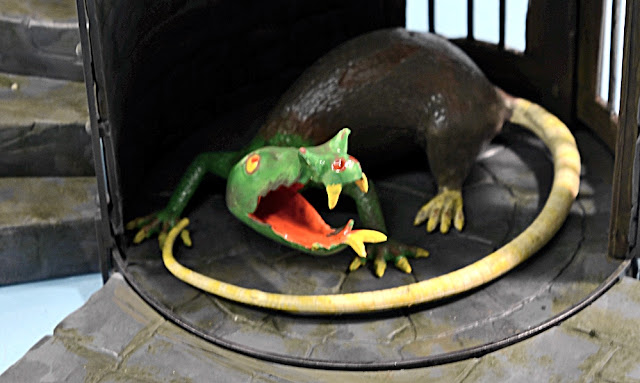 Closeup (below) of the upper structure showing the semi-circular grating that can be raised and lowered. Note the nasty-looking slave collar resting on the wood. 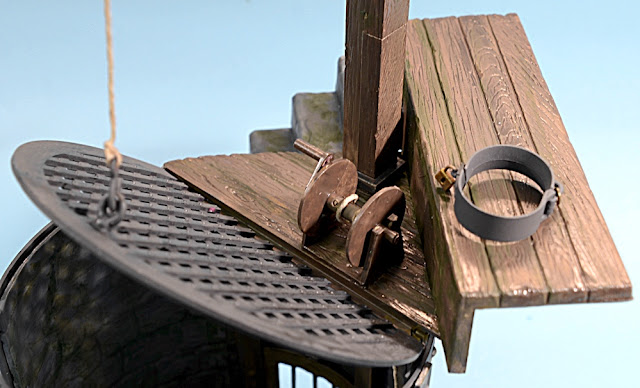 As for the transparent component, I’m not sure that it’s worth fitting. This part was the reason for a delayed launch, so it may seem slightly perverse not to use it. However, leaving it off does not seem to detract from the scene - in fact, without it, you can see the creature inside much better.

A closeup shot of the monster (below) with clear covering in place. 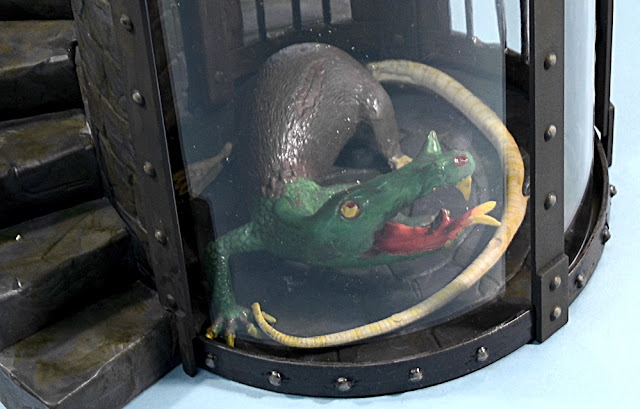 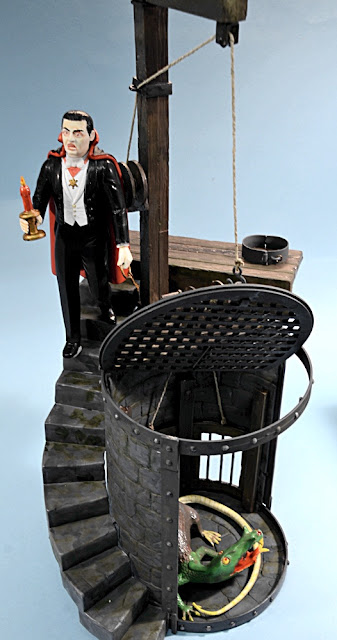 The upcoming Dencomm Monster Scenes kit (below) is called The Dungeon. 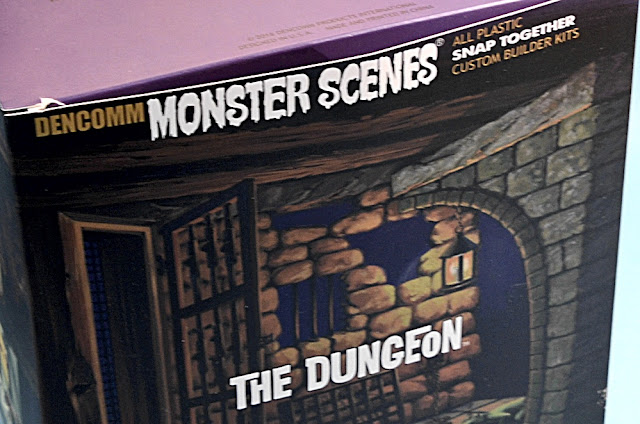 Monsters from Aurora
Monster Scenes were Aurora’s final attempt at the monster kit market, the company already being well known for its Monsters from the Movies kits, including Dracula, Frankenstein’s Monster, and the Creature from the Black Lagoon.

Aurora’s Project Manager of the time, Andrew P. Yanchus, came up with the idea of a smaller-scale series aimed at children. Andy sized the series to the slight odd 1:13 scale, but made much more of the models being adaptable by their builders into a variety of situations. To this end, a number of the existing subjects - Dracula, Frankenstein's Monster and so on - were also produced to 1:13 scale, and given new bases.

To enhance play value, new kits were introduced that were more generic, such as The Hanging Cage, The Pain Parlor, Gruesome Goodies - there was even a kit called the Guillotine. And there were two more besides, the Animal Pit and the Dungeon.

However, public reaction to the Monster Scenes was somewhat negative (click here for more info) and Aurora reacted by pulling the plug on the whole idea.

So the Animal Pit and Dungeon dioramas were never issued, even though most of the tooling was complete. When Aurora ceased trading in 1977 the tooling was taken over by Monogram. Revell-Monogram, as it eventually became, played about with ideas for monster kits, and some - including Dracula and Frankenstein’s Monster - were reissued. But the Animal Pit and Dungeon never made it to model stores, even though test shots were made.

But now enter Dennis Prince, a long-time Aurora fan who has started to issue new Monster Scenes kits. Already available are the Skeleton, Feral Cat and Saber Tooth Rabbit. Now he has acquired rights to the two missing dioramas and they are available at long last.

Summation
If you are into horror and fantasy, this is a good kit to acquire. Snap-fit makes assembly easy, though cement helps to keep the components together permanently. For nostalgia fans, it’s a chance to grab a piece of old-world Aurora charm. We’re looking forward to seeing its companion kit, The Dungeon.

Click here for SMN articles on on Monsters (and Munsters).

SMN note: The next HaMeX Events model show is called ‘Extreme Weathering’ and will deal with all aspects of the subject. Click here for details of the show, which is slotted for May 2017.