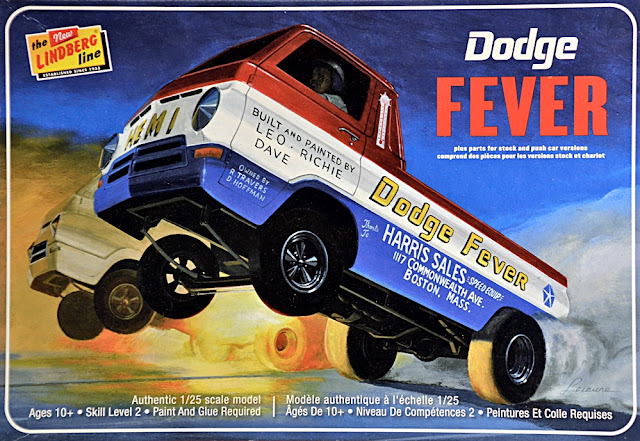 EXPERIENCED AUTO modellers may recognise this 1:25 scale kit as a reissue of the classic Dodge A-100, first released by IMC as the Little Red Wagon drag pickup.

Mat Irvine: As with the LRW, Dodge Fever can be built one of three ways: as a pure stock machine, as a dragster push-car (one that bump-starts other dragsters), or as the dragster itself. 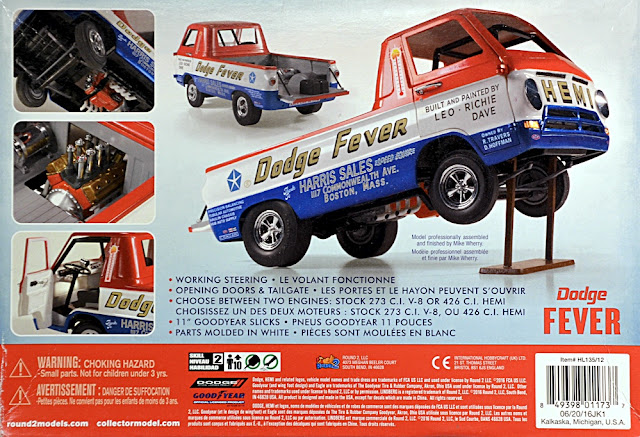 Note the company logo (below) is now ‘The NEW Lindberg Line.’ The side panel features a set of action photos of the full-size machine. 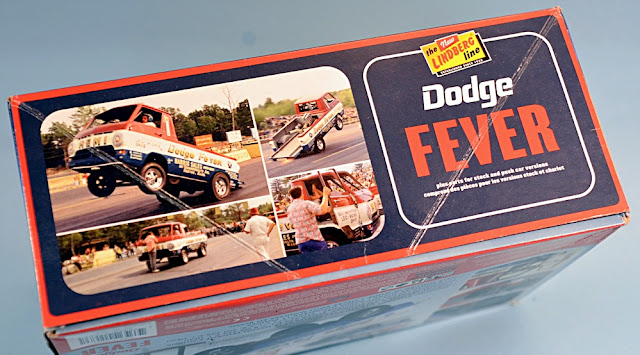 Partswise, Dodge Fever is identical (below) to the Little Red Wagon, with a stock 273 cu in V8, or, for the dragster, a 426 hemi-V8 with fuel injection stacks, which is located amidships below the pickup bed. Included are six tyres: four stock, and two drag slicks.

As for working parts, both doors can be opened, the tailgate lowered, and the front wheels turned to the desired display angle. 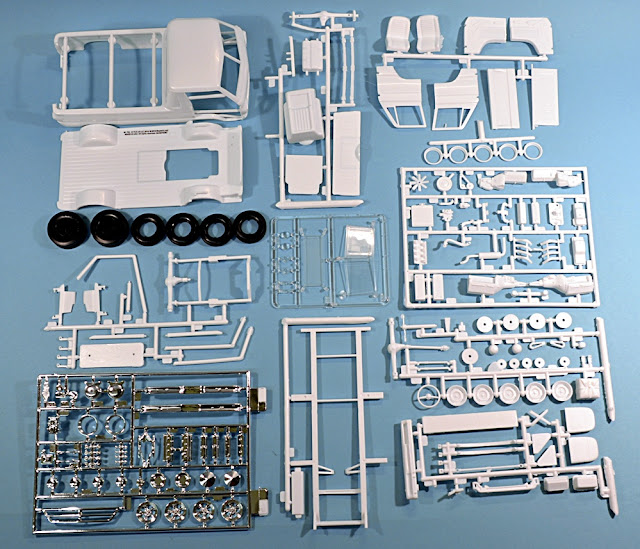 What is different with this new kit is the finishing scheme. It’s red, white and blue, with Dodge Fever decals (below). 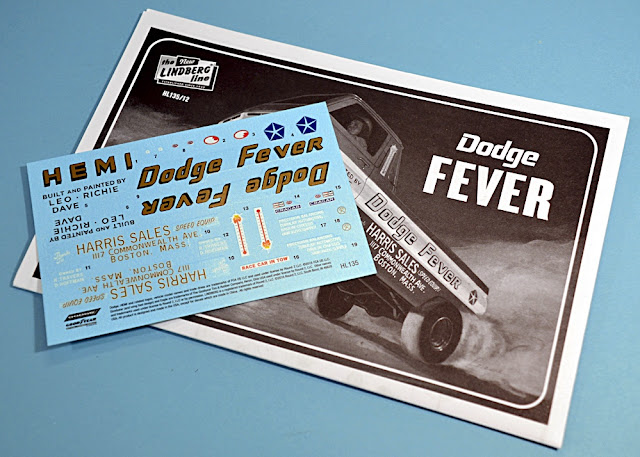 To achieve the new look, I sprayed the model with Humbrol gloss white. This was then masked, and the lower blue shade (below) sprayed on with Testors dark blue. Finally, after all was thoroughly dry, I masked off again and sprayed on Humbrol bright red. 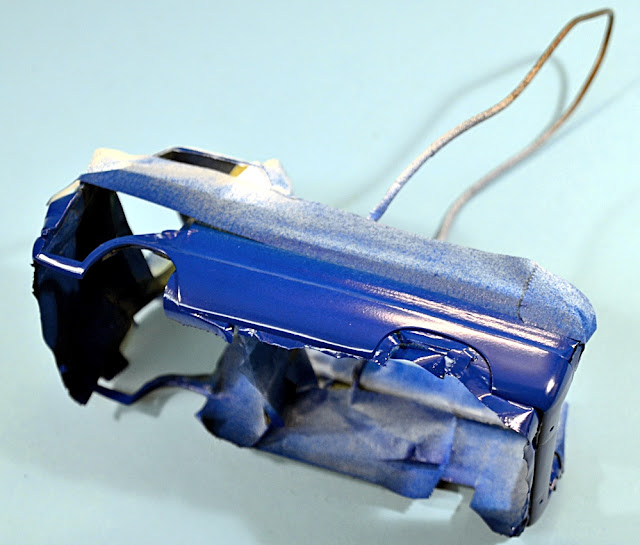 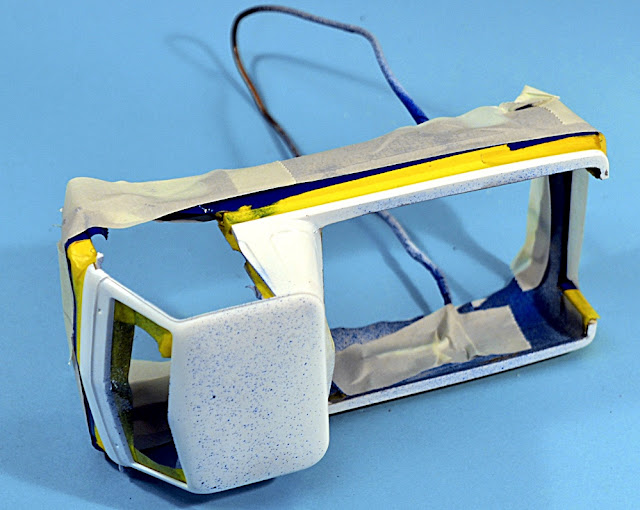 There’s a lot of masking tape involved, the ball of waste (below) showing how much I used! To create the actual masking line, it's best to use one of the specific model masking tapes. I used a Tamiya product for this. A general (and cheaper!) tape can then be used to fill the gaps. 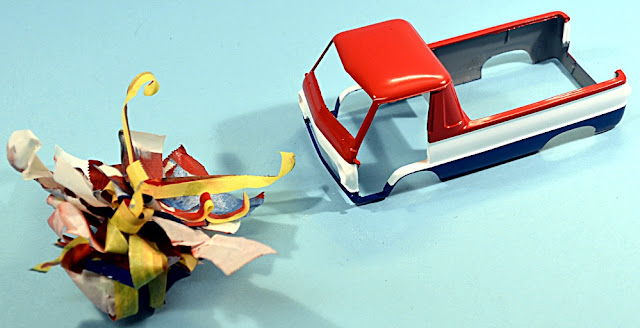 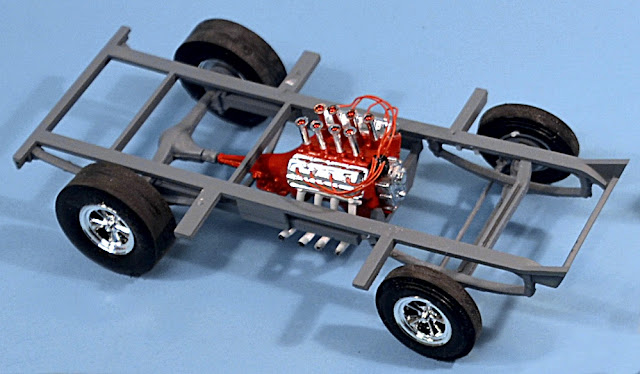 The interior of the pickup sides and bed is mid-grey, the cab interior is white. Note that the kit supplies a stand that holds the pickup in wheel-stand mode. The push-car version has a wood bumper, also supplied, though it doesn’t get even a mention in the instructions. 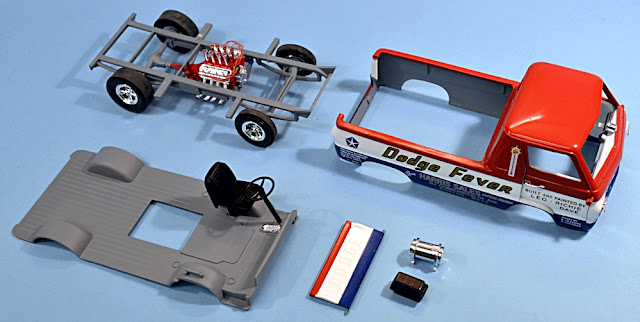 Subassemblies (above) ready to be brought together. I fitted the floor pan rear-end first into the body, then juggled the two gently to fit the front end into place. The blade of a modelling knife came in useful to ease the body sides over the floor pan. The result you can see (below). 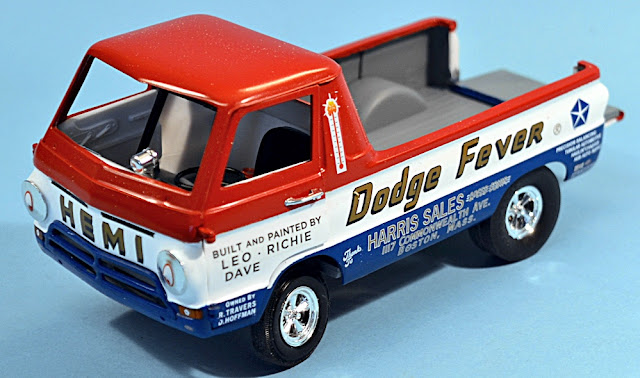 The truck displayed in wheel-stand mode (below) using the supplied stand. For the base, I used an old pre-printed item from Tyresmoke Products, unfortunately long out of production. 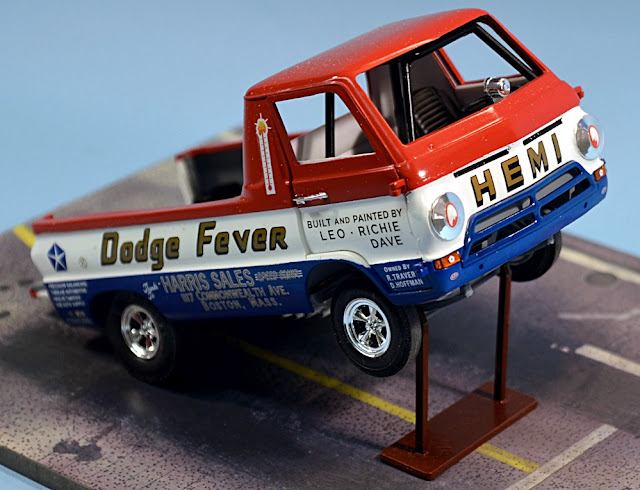 The finished truck (below) with some AMT Dragstrip Accessories. The driver in the fireproof suit is a white-metal figure that was also produced by Tyresmoke. 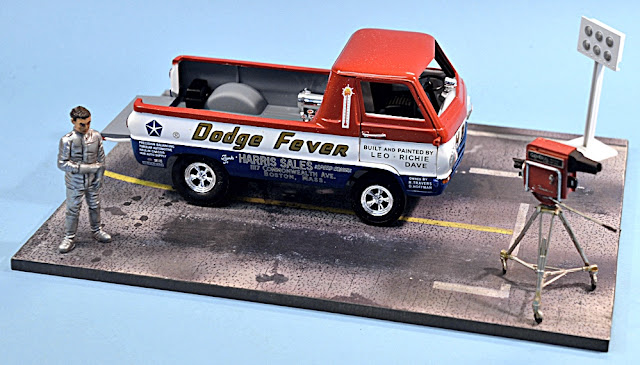 About drag vans
The Little Red Wagon, driven by the late Bill ‘Maverick’ Golden (1933-2015), is the best known Dodge pickup dragster. Other versions included the subject of this kit, Dodge Fever. Most Dodge drag pickups followed the same pattern, with the engine relocated behind the cab, though there were differences in the details.

Summation
A nice kit for van and drag fans. I searched online for Dodge Fever pix, but could find no more than the ones on the box. However, these reveal a few alterations to Dodge Fever that are not in the kit. The main changes are that the exhaust headers come out over the top of the engine block, not underneath, and that the tailgate is fixed in the ‘down’ position, held by two substantial girders that run the length of the pickup bed. But otherwise. the kit looks pretty authentic.
Scale stats
Lindberg: Dodge Fever
Scale: 1:25
Parts: 150
Assembled length: 165 mm (6.5 in)
Manufacturer’s ref: HL135