THE PHANTOM AND THE VOODOO WITCH DOCTOR: PURPLE PLASTIC FROM ATLANTIS 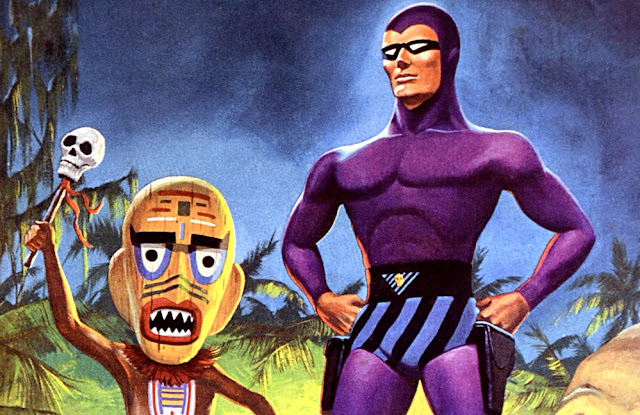 THIS ATLANTIS MODELS FIGURE KIT of the Phantom newspaper strip superhero is a reissue of an original 1965 Revell kit.


Mat Irvine: The Phantom and the voodoo witch doctor is a companion kit to the Flash Gordon figure from Atlantis. However, unless you are a dedicated comic fan, the Phantom will probably be far less familiar than Flash. The two share similar origins though, as they are both based on King Features Syndicate strips, rather than movie adaptations.

The Atlantis reissue (below) uses a straight reproduction of the original Revell kit box art. 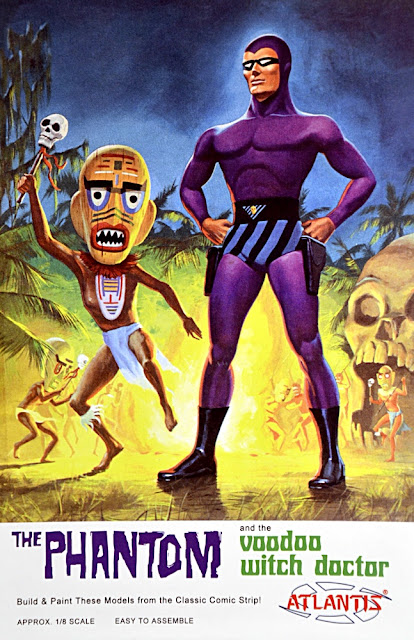 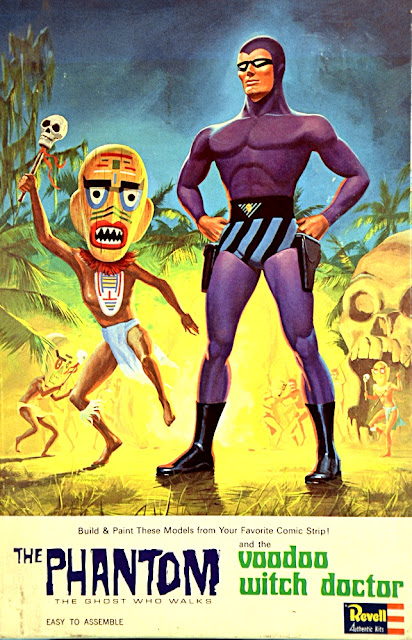 Both Flash and Phantom kits were originally aimed at younger modellers, though both are conventional glue-together, not snap-tight. Assembly is extremely straightforward, as the Phantom has only 14 parts, the companion witch doctor making do with just two. The rest of the components form bases for the figures, and a nameplate. The Phantom has distinctive purple clothing, and the Atlantis kit is moulded in purple styrene, a more appropriate colour than the original Revell kit’s white. 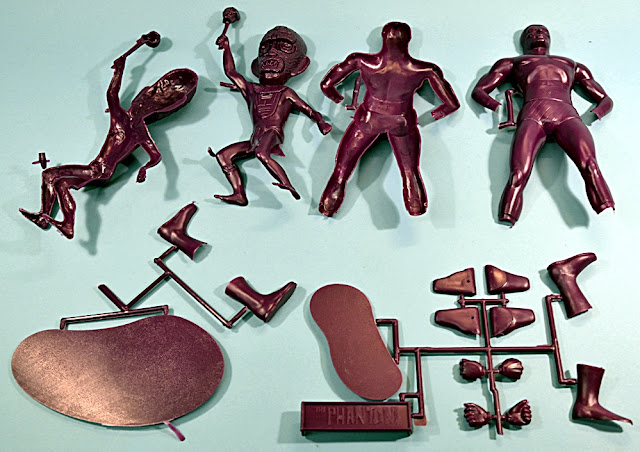 Andy Yanchus, past Project Manager for Aurora, kit historian, and advisor to Atlantis on the reintroduction of these old kits, says, “I realize that the purple plastic will make painting a few details more difficult. Fifty years ago, when Revell first produced the kit, they were aiming at young children and the proper color would have been a great help in building the kit.”

Plastic colours compared (below). The original Revell was moulded in white, the Atlantis is released in purple. 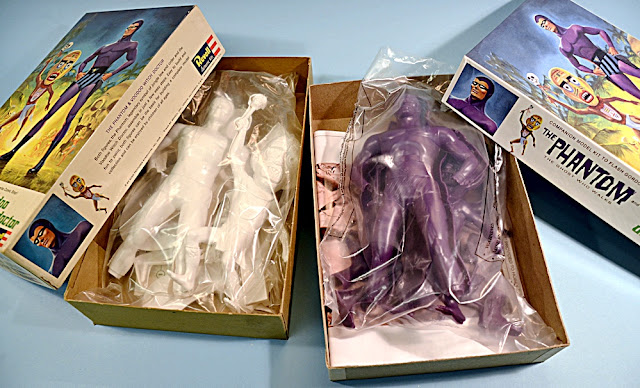 Andy goes on, “…However, many of these new kits will never be built, just added to collections as is. Kit collectors love lots of color; there’s nothing more boring than having hundreds of boxes full of white and light gray styrene!”

As with the Flash Gordon kit, you get a reproduction of the Revell sell sheet (below right) which was designed originally for trade use. 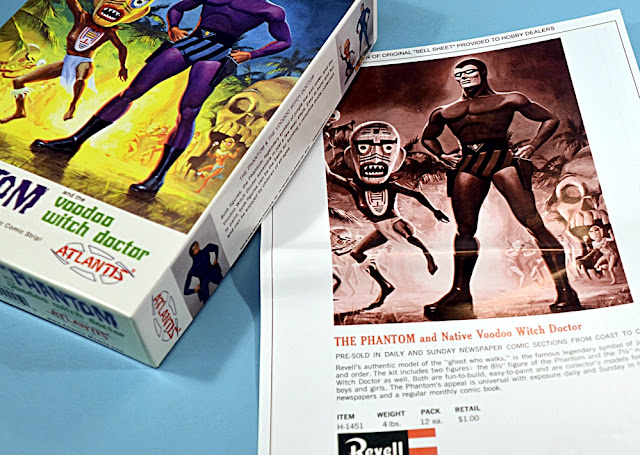 Unlike the box top, the Atlantis side panel design and images (below) are new. 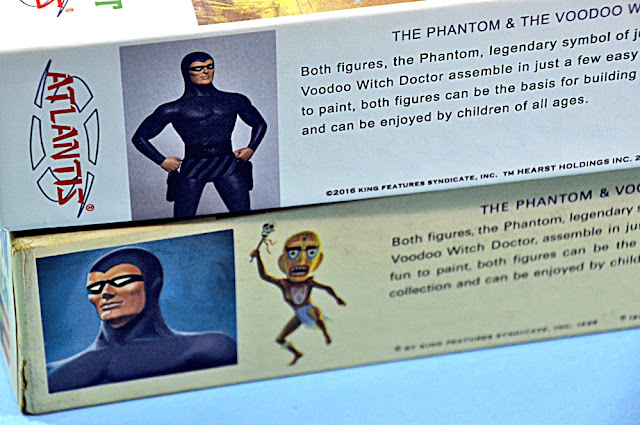 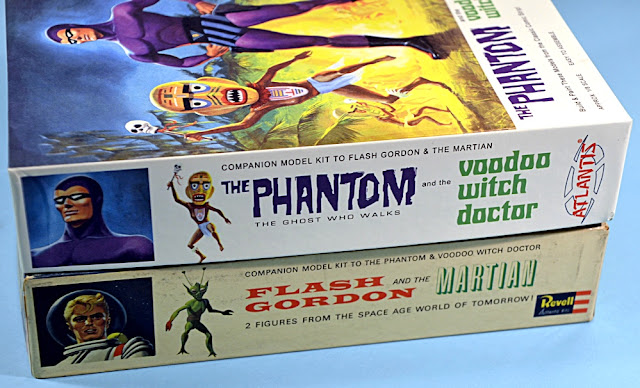 An assembled and painted Phantom and the voodoo doctor kit (below), as built by Andy Yanchus and used on the box side panel. 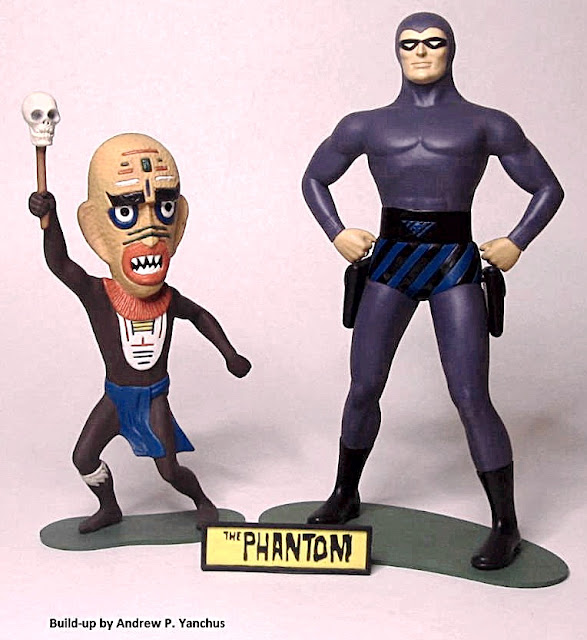 Summation
A kit for comic fans, but one that is quick and easy to assemble. Painting is the key to a successful display, and even if the Phantom is mostly purple, you can go to town with the mask worn by the colourful witch doctor.

About the Phantom
The Phantom is the descendant of a survivor from a pirate raid, washed up on a distant shoreline some 400 years ago. He became the first Phantom, vowing to devote his life to the “destruction of cruelty and injustice,” also directing his descendants to follow the same course. Consequently, by the time of this kit’s era, we are into the 16th Phantom, his identify hidden by the superhero outfit.

How the Phantom legend started (below). 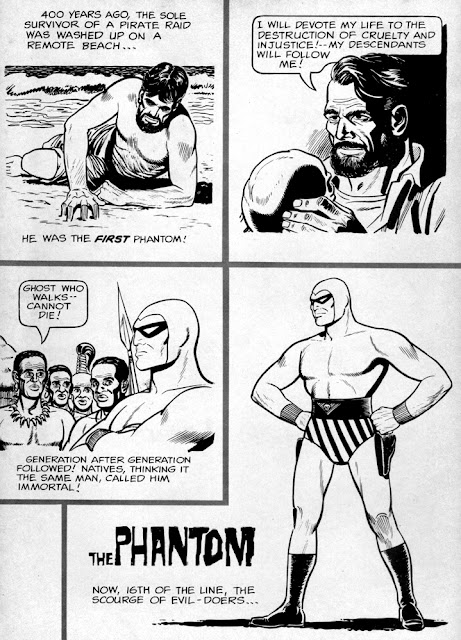 The Phantom still appears in the comic strip pages (below) of many US newspapers. 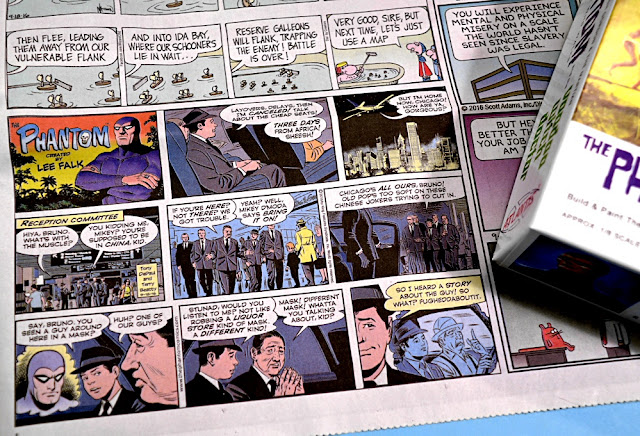 The Phantom and Flash Gordon have appeared together in Defenders of the Earth, an animated TV series produced in 1985, the storyline being set in 2015. 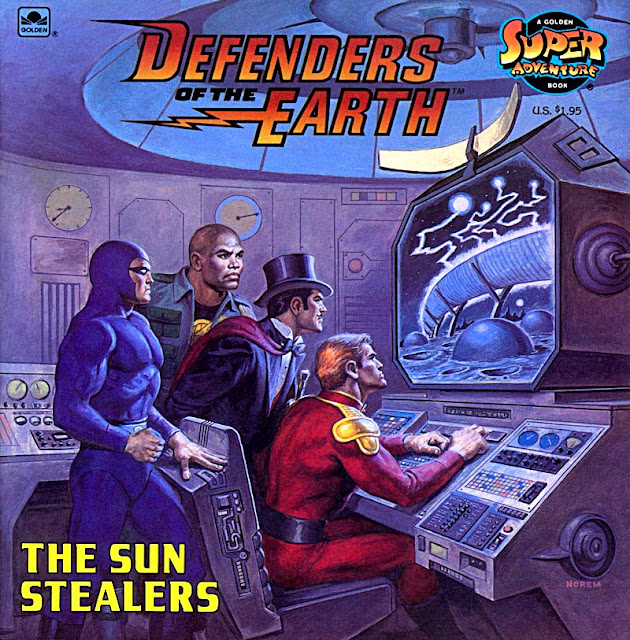 There have been several movie adaptations, the most recent being a 1996 version, starring Billy Zane. Trailer shown (below) courtesy YouTube.

Heavenly city for comic fans
Click here to read about our trip to Brussels, Belgium, and its comic strip museums. Strip art is taken very seriously in Europe, where it is known as the eighth art form, or BD (Bande Dessinee).

Thanks to Atlantis Models for the sample kit, and to Andy Yanchus for his invaluable help.