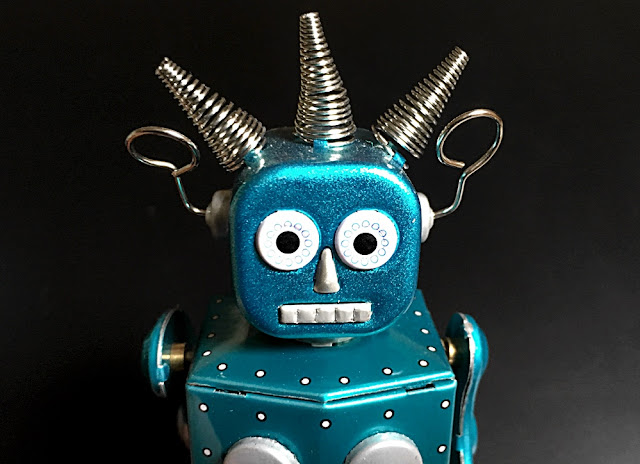 MANUFACTURED IN CHINA, THE ELEKTRA ROBOT is an unusual collectible mechanical that seems to be a *sorta* female.


SMN report: Despite being a robot, we reckon Elektra's a she, because of the metal frock and excellent hair-do. And of course, those hard-to-miss mammaries adorning her torso.

Depending on the production run intended for Elektra and her companion, a robot called Roxy, her sex alone could make her a sought-after collectible in years to come. 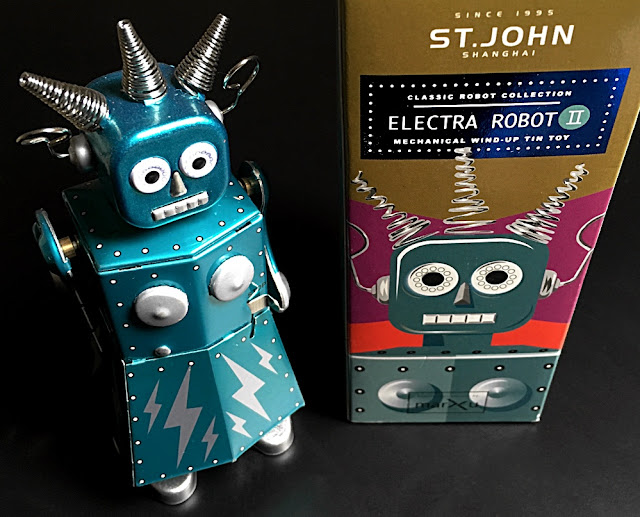 Wind-up movements include a walking action plus a pair of flailing arms, one of which hacks and slashes with a lightning-shaped kitchen knife (below). So it doesn't pay to be on the wrong side of this female-style robot. 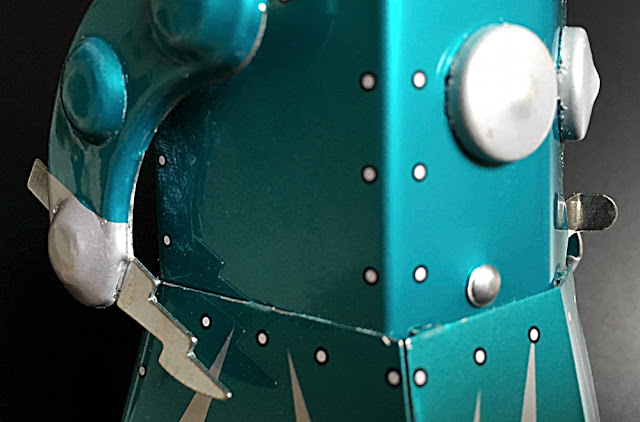 The story of tinplate toys
Tinplate was first used as a toy material in the mid-19th century, being a thin sheet of steel plated with tin, hence the name. In the 1880s, offset lithography was introduced to print designs on the shaped but flat tinplate components. They were then folded and assembled, usually held together with tabbed endplates.

In the early years of the 20th century, Germany was the world leader in tinplate toys, the best known manufacturer being Lehmann. French, English, and US companies followed Lehmann’s lead, though it wasn’t until the 1920s that US companies such as Louis Marx established a firm lead, with cheap products that became popular worldwide.

During World War II, tin toy production stopped because metals were needed for armament production. However, after the war, the Marshall Plan allowed Japanese manufacturers to restart production, with US companies providing sales and marketing skills.

The scheme worked, and Japan became the new world tin toy leader, a title that lasted until the end of the 1950s. Then cheap plastics and stringent home safety rules killed off much of the tinplate toy industry. Today, China is the new home of tin toys, with many retro-styled items aimed at the adult collector market.

The new-wave tin robot (below) is a typical modern Chinese product, cleanly printed and and precisely manufactured. And it has a clear target market - buyers looking for retro-look goodies in gift shops. It even has a notional purpose, as it is sold as a Lunch Bot, a robot lunch box which opens up as a container for 'Out of this World Lunches.' 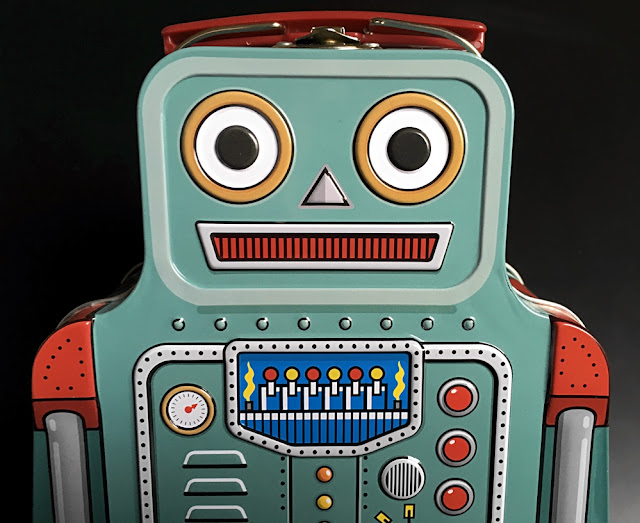 The Lunch Bot has an extending handle and metal catch on the head. This releases to allow you to open up the front and reveal the cavernous interior. The back is attached by pop rivets, as is the swivel joint on the base.

We reckon that the Lunch Bot is far too stylish (and in these PC times, definitely 'unsafe') to be ruined by daily work on the school run. Much better to keep it as a display piece. 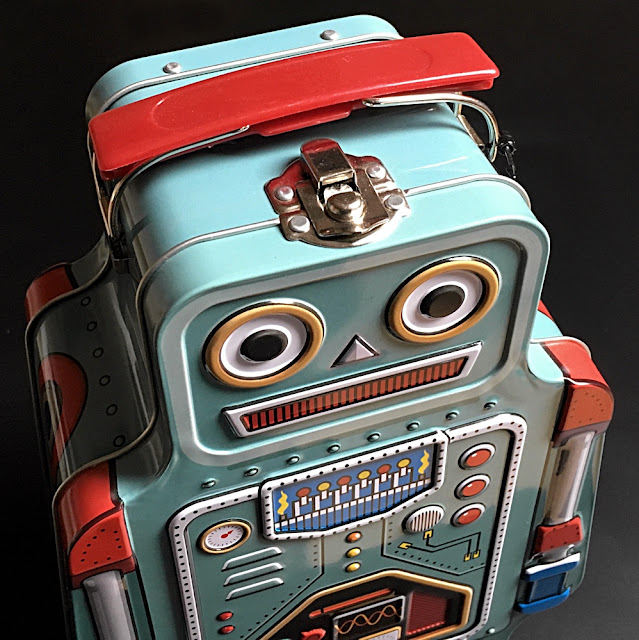 The retro style of the Lunch Bot extends to its included description label (below) created with a state-of-the-art desktop graphics app. 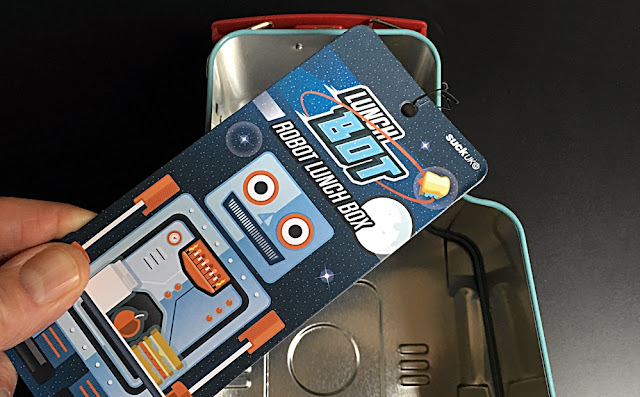 Of course, Elektra and Lunch Bot are not alone. Robby (below) is by far the best-known cinema robot, and many (many!) toys large and small have represented the machine that first appeared in the 1956 movie Forbidden Planet. Today, Robby is an iconic figure 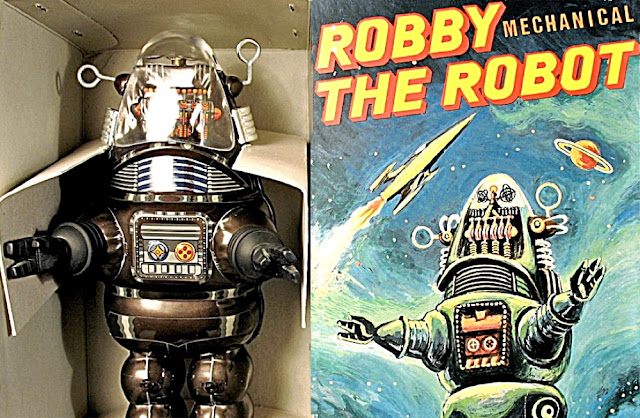 Original movie poster (below) for the MGM movie Forbidden Planet.

Tinplate robots often have moving features, the one (below) being powered by a clockwork motor. After winding up with the key, the robot moves forward on small wheels, a walking appearance being created by the feet, which are attached to the wheels with small rotating cams. 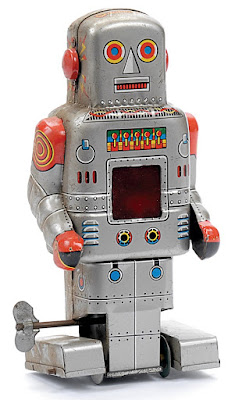 Last but not least, the US Schylling company has a nice range of nostalgic stuff, including some attractive retro-tinplate toys (below). Click here to see these and also a delightful Martian tripod war machine from HG Wells's War of the Worlds.

Another Schylling production, the Future Car (below) is a another delight for those who like retro sci-fi. The transparent dome with a driver-pilot inside makes the Future Car a little different from - and therefore more desirable - common or garden all-in-one tin pressings. 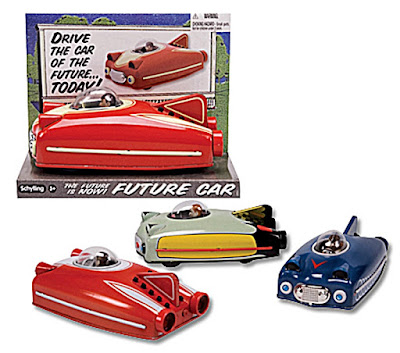 Assorted robots on show (below) in Mr J's Cupboard of Curiosities. They are made of materials that range from tinplate (far left and right) to the chromed-china cup and saucer, displayed with a plastic robot pen and promotional simulated battery from the electric-car maker, Tesla Motors.

The saucer came from the London Science Museum, and is decorated with a distorted ('anamorphic') image of the Sputnik 1 satellite, a 'sorta' robotic device, placed in Earth orbit by the USSR in 1957. However, if you look at its reflection in the cup, Sputnik 1 appears to be the right shape, provided you choose the correct angle of view. 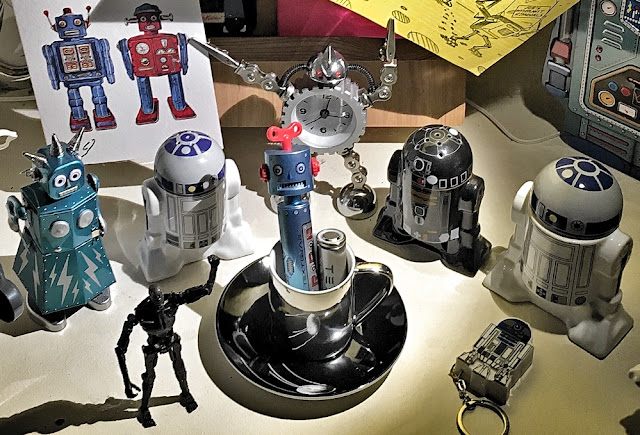 What’s the best tinplate investment?
The SMN vote goes to early tinplate from Germany, or mid-20th century robots from Japan. Neither are being made any more, so rarity guarantees their value. But as with all such collecting, buy what you like rather than for the pure investment value. That way, you can enjoy your new toy for what it is - but if the value increases over time, then that makes a fine bonus.

To round things off, here's a Hallmark Collectible Robby that talks. Click here for the full article.