UBER TAXI OR JETSONS FLYING CAR? YOUR CHOICE - OR BOTH 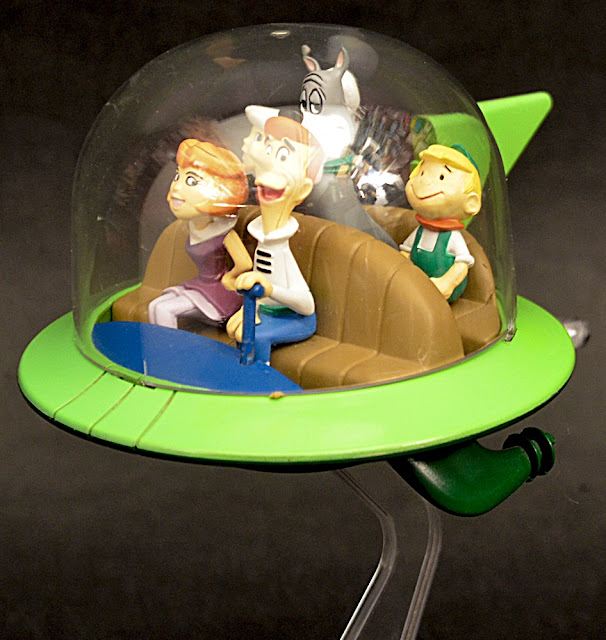 THE UBER TRANSPORTATION COMPANY HAS ANNOUNCED plans for an airborne taxi fleet. And that made us think of the flying car used by the Jetsons, a futuristic family that featured in their own cartoon series.


SMN report: The Jetsons TV series first aired in 1962, and starred a family that lived in a toon universe that was clean, fresh, and full of amazing gadgets. And those gadgets included the family car, a flying saucer with a transparent dome on top.

A 1:64 scale diecast version is made by Hot Wheels. Hardly surprisingly, it runs on a set of wheels, but is otherwise a reasonable representation, considering the small scale involved. 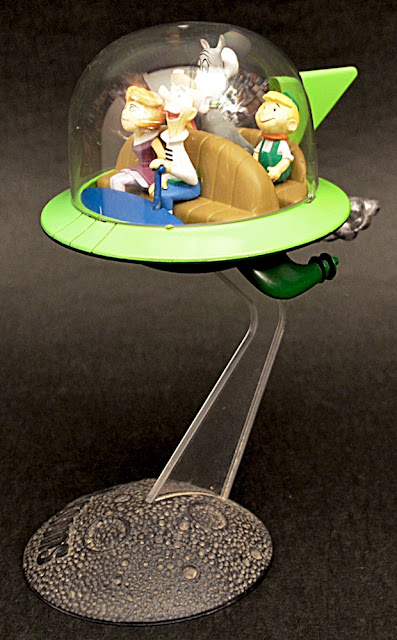 The 1:24 scale Polar Lights model is pricy, but does include all family members, including Astro the dog. It's the one featured in these pix, provided courtesy Mat Irvine. It's a snap-kit, though as always components benefit from cement in looser spots. The stand has an appealing lunar-style base, though it could do with being more substantial, as the assembled flying car is no lightweight. 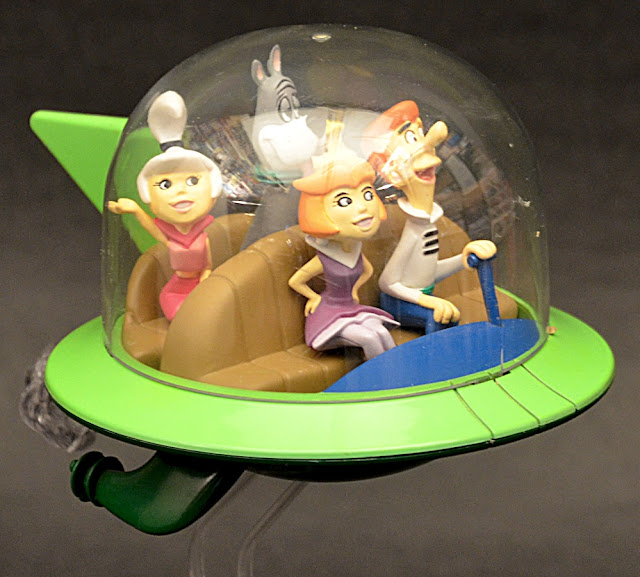 Minus the big dome, the Jetsons family (below) can be clearly seen. Figures are pre-painted, and work well as representations of the original cartoons. 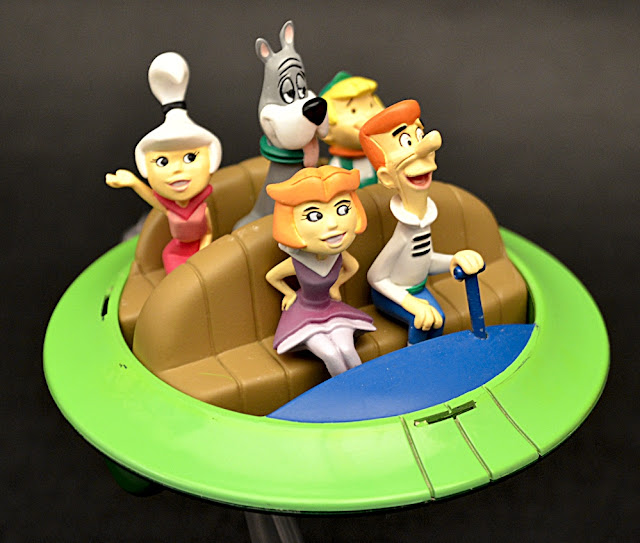 When we build our flying car, it'll be a down and dirty steampunk machine, rather than this clean vision of an unlikely future. There'll be plenty of rust and grime on it, especially around the turbines, and a dystopian grunge-punk look to the figures that should transform the whole thing. 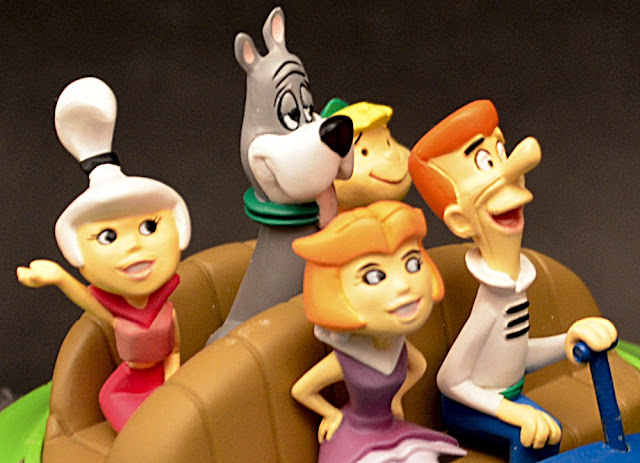 Presently available is a simplified Polar Lights kit (below) now called a capsule car, with just George Jetson and Astro sitting inside. It's still fun, though it's a shame the other family members are not on board. 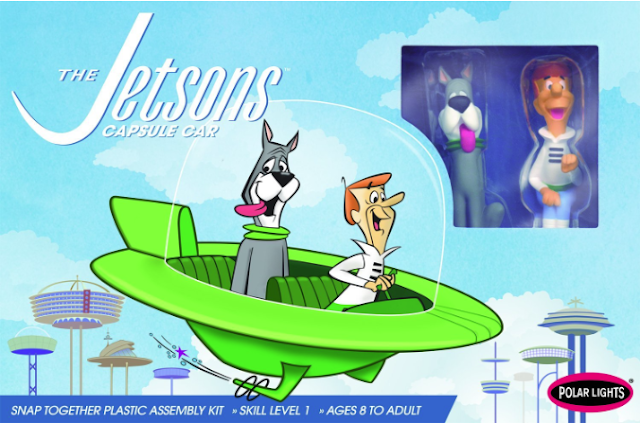 The Japanese manufacturer Giants produced a Jetsons flying car (below) though the tracked machine bears no resemblance to the TV series original. The kit is based on a vehicle that featured in a TV manga series. 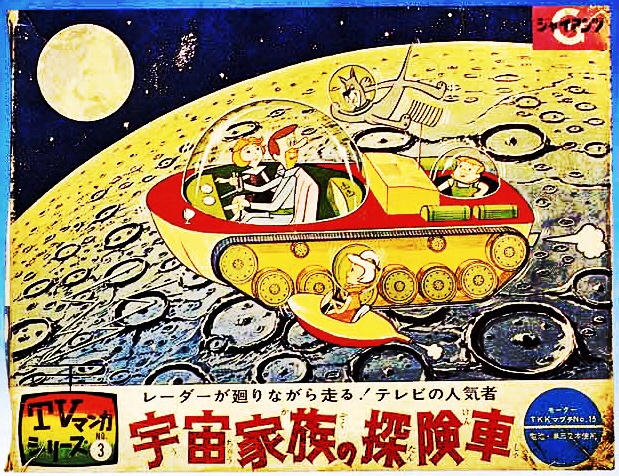 Coming up to date, the sleek video (below) shows what happens when a bunch of cgi animators got to work on a promotion for the international Arconic engineering company.

In the real world drones are big-time popular and the Uber transportation company aims to take robotic air cabs from science fiction to science fact (below). This particular design uses banks of electric props to fly customers in what Uber reckons will be automated safety and comfort.

A scene (below) that's crying out for a scale model version from diorama fans out there. We'd probably want to build a landing zone that's more interesting architecturally, but the subject is a good one. 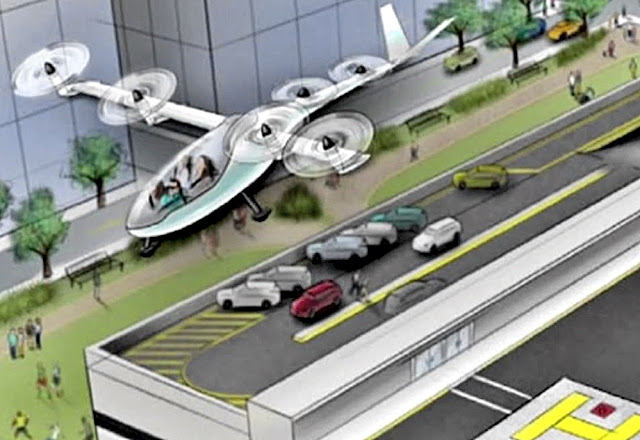 Another visual (below) from Uber, this design features eight props, and swivel wings to allow vertical takeoff and landing.

Uber has already tried the Volvo (below) as a self-driving cab experiment. Note the array of sensors on the roof, an easy idea to take if you wish to kitbash an existing model. 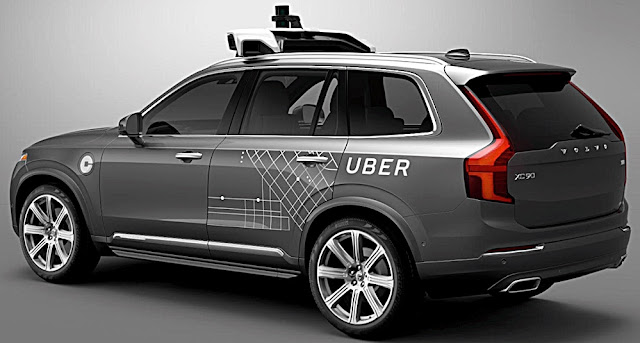 Another Uber experimental vehicle. This Ford has an antenna stack that could make the Back to the Future De Lorean very jealous. 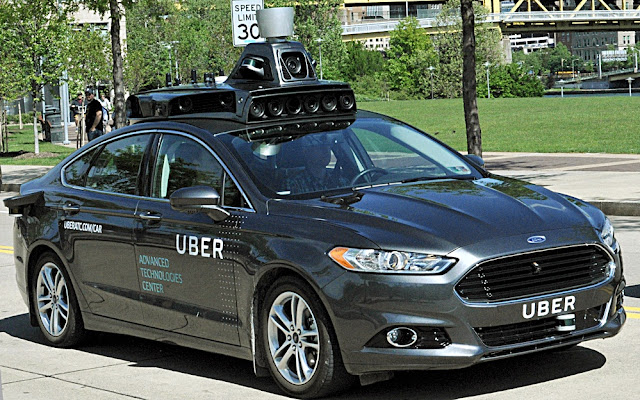