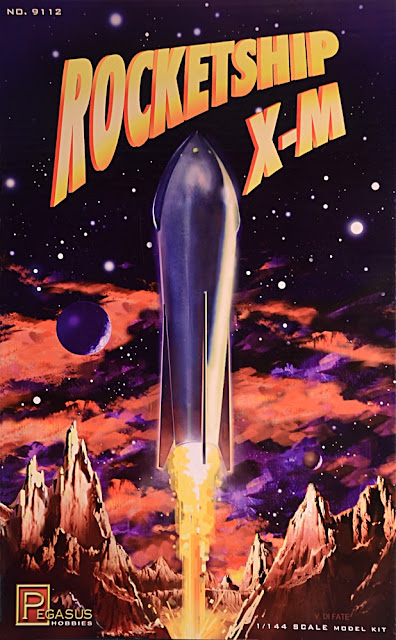 SCIENCE FICTION B-MOVIES WERE A STAPLE OF CINEMAS in the 1950s. Many were appalling, such as Plan 9 from Outer Space. A few were extremely good, such Forbidden Planet, and Destination Moon. Others sat in the middle, the so-so zone occupied by the likes of Rocketship X-M.

Mat Irvine: The plot of the 1950 movie Rocketship X-M was based around a Moon mission, hence the X-M name, short for Expedition Moon. However, the X-M ship didn’t actually land there. Instead, the screenwriters included a meteoroid storm that blew it off-course and on to the planet Mars, despite the enormous difference in distance between the two worlds.

Otherwise, the design of the Rocketship X-M spacecraft was a reasonable one, being based on a science-fact article (below) that appeared in the Life magazine of January 1949. This had given an accurately-conceived depiction of such a trip, with paintings and diagrams to back up the text. The somewhat phallic Life spaceship design became, more or less, the Rocketship X-M. 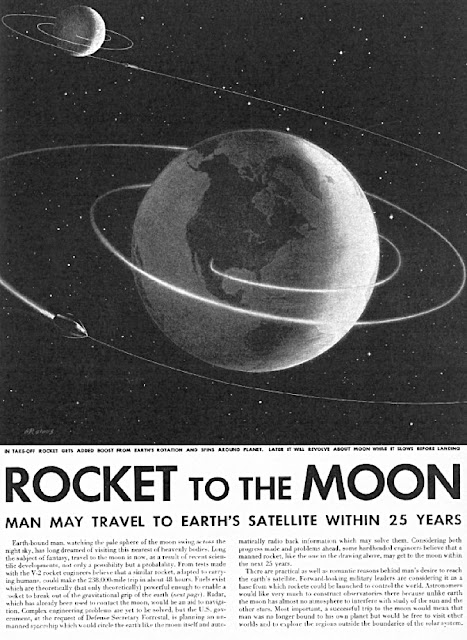 The Pegasus Hobbies 1:144 scale Rocketship X-M (parts shown below) is the first conventional kit of this design. It’s an easy build, as the model consists of just seven components. The fuselage is moulded in two halves, with two separate tail fins to complete a total of four. There is also an engine plate at the base, and two transparent parts for the tiny cockpit windows.

The box art for the Pegasus kit was painted by the long-established science fiction and fantasy artist, Vincent di Fate. 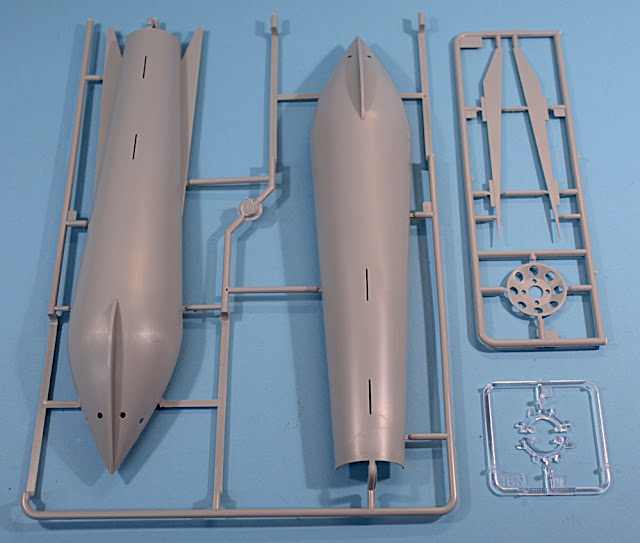 The only slightly tricky part of the assembly is that those tiny windows need installing before the fuselage halves are joined together, which means they also have to be masked, assuming you are giving the model a spray-paint job. And spraying is the only real option, given that X-M is a classic 1950s spaceship with a bare-metal finish.

So I first installed the windows, then tinted them from the inside (below) with Tamiya green transparent paint. After that, the fuselage could be cemented together. After wet-sanding the joints, I found that only a small amount of filler was required, as the fit was excellent. Then I masked the windows by the simple expedient of using tiny balls of Blu-Tack. As I’ve said before, this product allows paint to dry properly, after which it can be easily removed, rather than turning into a gooey mess. 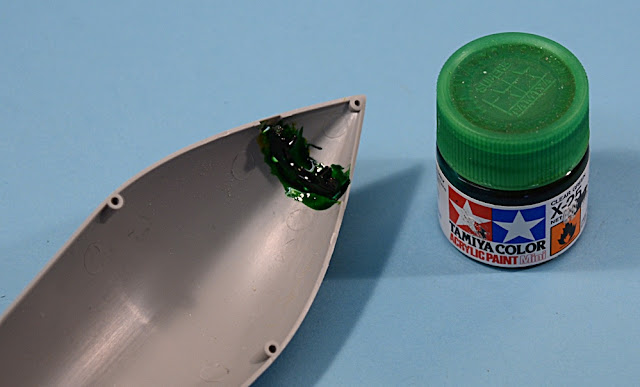 The engine plate (below) at X-M's base has 13 exhaust nozzles. 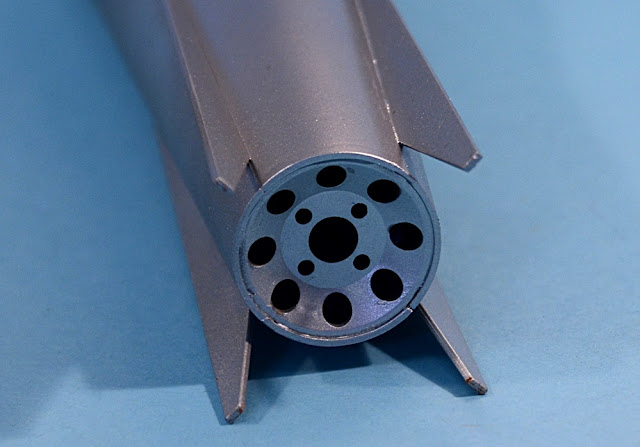 The whole craft was primed with Humbrol matt black acrylic spray, then finished off (below) with a top coat of silver. A clear or semi-clear top coat could be an option, as it tends to protect against fingerprints marking the shiny silver surface. 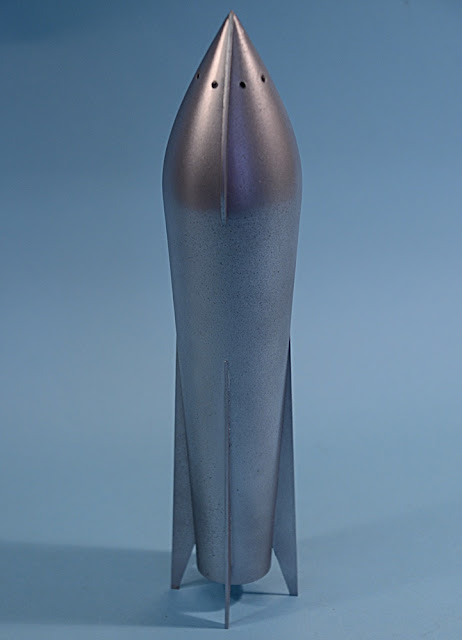 Then I decided to give Rocketship X-M a suitable Martian display base (below). A rectangle of board provided the basic format, with a chunk of rock shaped from polystyrene foam. Lumps and bumps were added, using assorted filler materials. Ochre-brown was sprayed over the Marscape, finished off with a dusty appearance, using a carefully applied tub of cocoa powder. 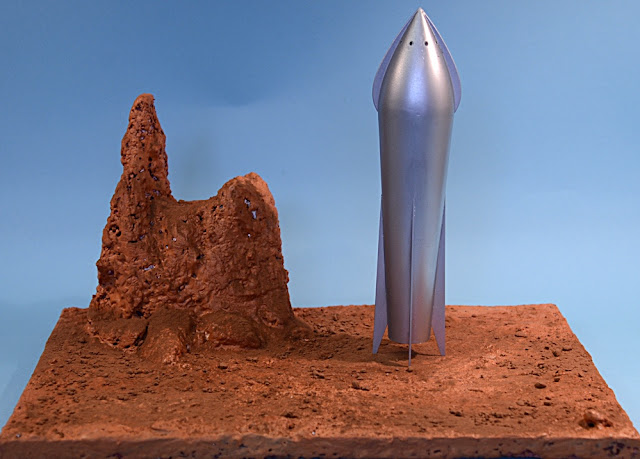 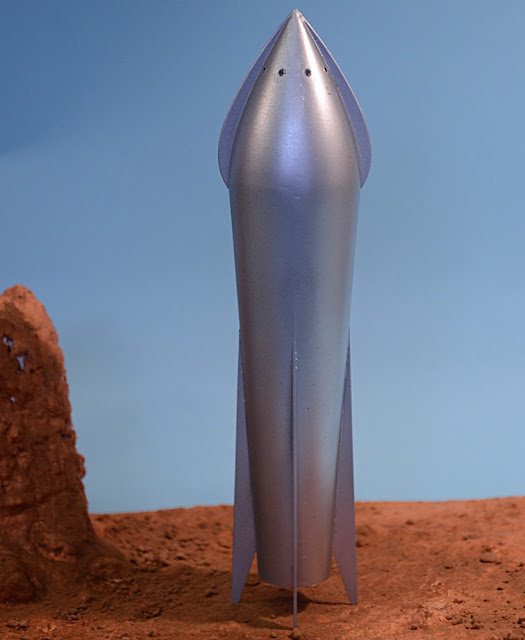 Rocketship X-M (two pix below) is featured in the Spaceship Handbook, by Jack Hagerty and Jon Rogers. 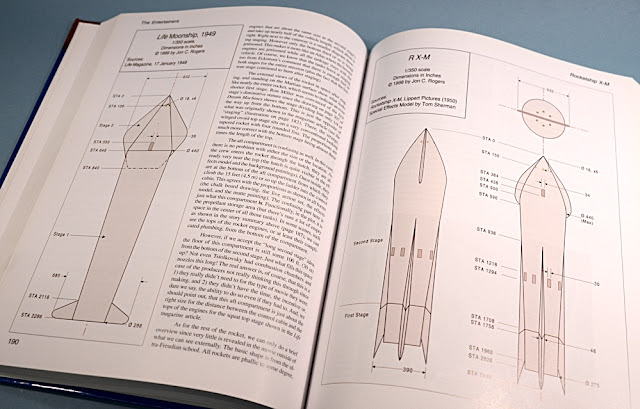 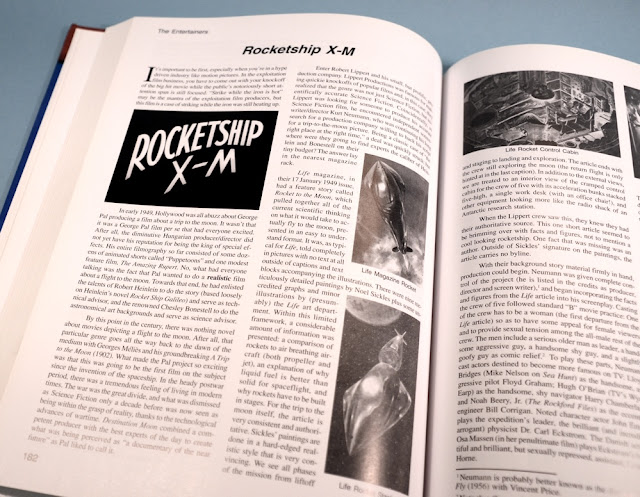 Pegasus HQ
Rocketship X-M is a recent release from Pegasus Hobbies. I visited Pegasus and its co-founder, Larry Thompson, at Los Angeles. The premises claim to be the largest hobby store in SoCal (southern California). Having walked around the store, I can believe it. A report is in preparation, as are reviews of other recent kits.

Here is the original trailer for the movie (below).