CITROEN DS 19: A FRENCH GODDESS FROM EBBRO OF JAPAN 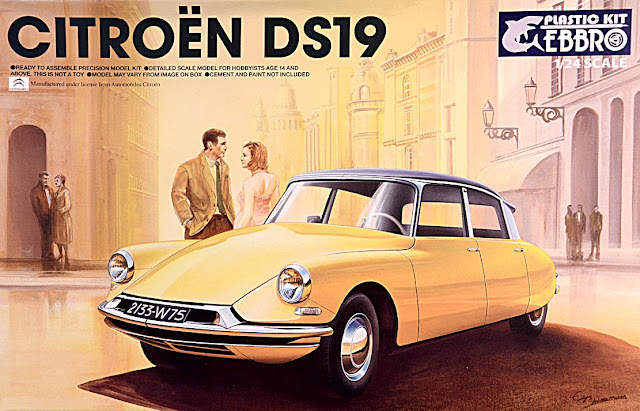 
Mat Irvine: But now the DS (pronounced ‘day-ess’ meaning goddess in French) has finally arrived, it has been worth the wait. The kit is finely moulded and fully detailed, with a separate engine and drive train, opening front doors, and steerable front wheels. Even the windscreen surrounds and trim are separate, chrome-plated mouldings.

The Ebbro box (below) is squarer than most Japanese or European or Japanese car kits. It’s closer in proportion to the US style.

Components (below) are moulded in two colours plus transparent and chrome. 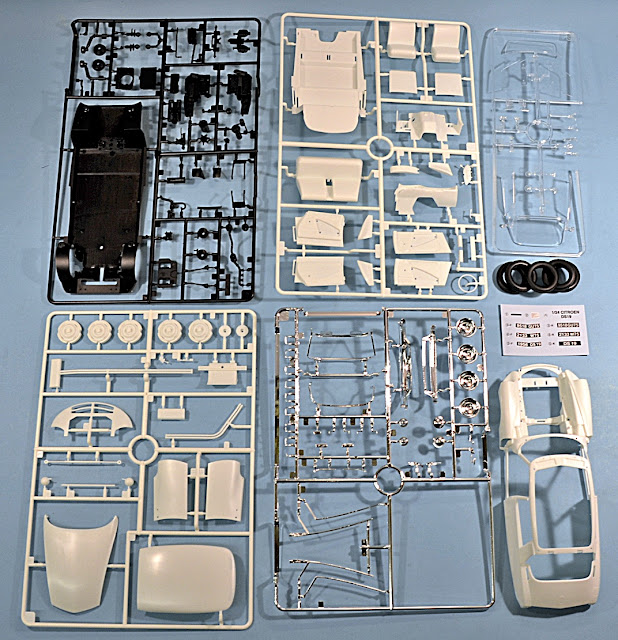 The DS 19's rear seat centre-armrest (below) can be positioned raised or lowered. 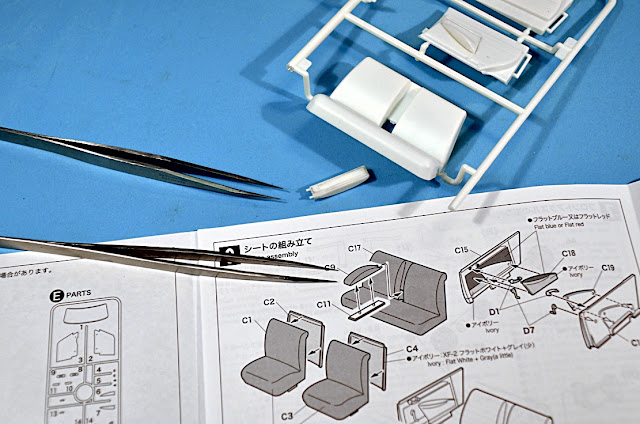 Most stock finishes for the DS19 had the roof in a different colour, usually white or black. Conveniently, the kit’s roof panel is a separate moulding, which means the rest of the body, including the front doors and bonnet, can be painted separately.

Unusually, the Ebbro DS 19's engine assembly (below) fits into the body, not on the chassis pan. 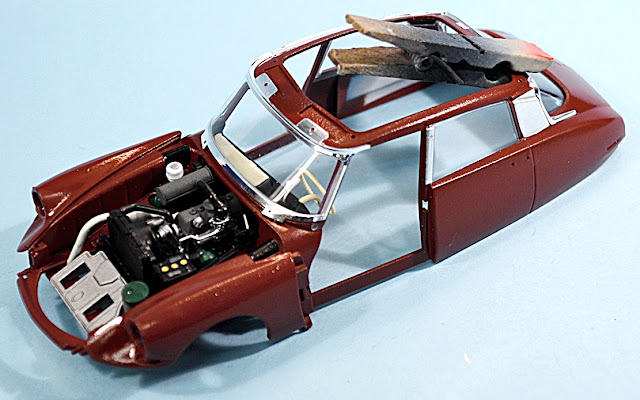 Closeup of the engine compartment (below) which has a decent level of detail. 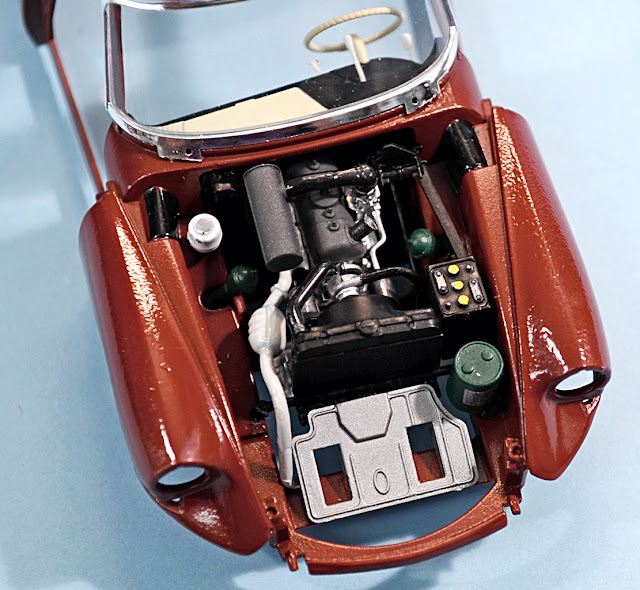 Another distinctive feature of the DS was the air suspension, and with the engine stopped, the car sat very, very low. This is reproduced in the kit, the car being depicted in the normal parked stance. The result looks something like a US low rider custom.

Because of the Citroen’s front-drive system, the underbelly was nearly flat, and Ebbro's model engineers have captured this accurately (below). 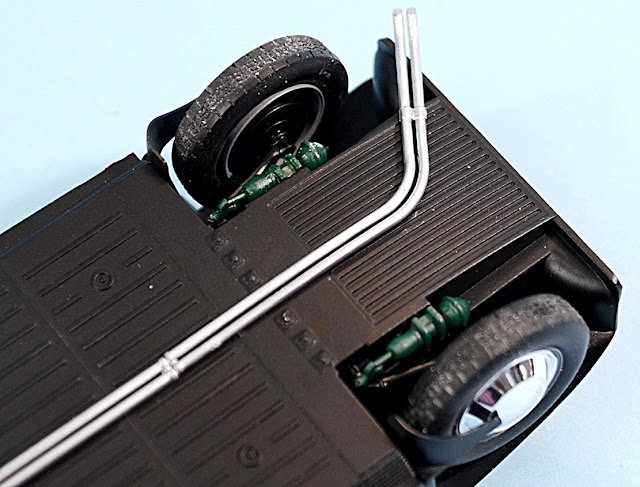 The Citroen’s silencer (below) was fitted to the front of the exhaust pipes, not the more usual mid or rear positions. The kit reflects this. 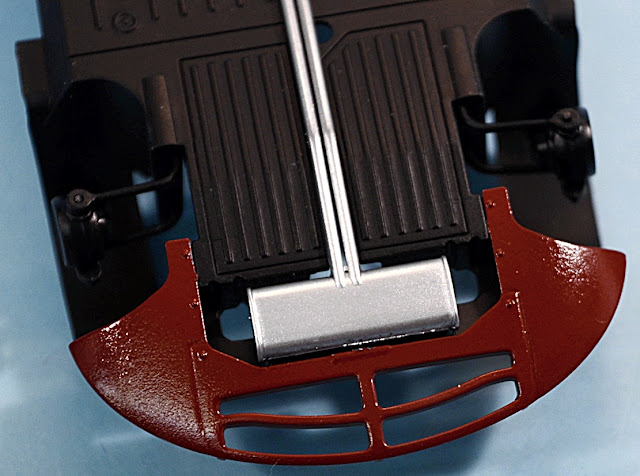 The only really tricky assembly point is fitting the front wheels in place. Unusually, the engine fits into the body, not the chassis, but the individual drive shafts can be fitted only when the body and chassis are bought together. Then the front wheels fit into nylon bushes, which needs some care, as there’s not much room for error.

The small lug (below) that connects the front bumpers to the door has to be cut off, but only after the body has been fitted to the chassis. 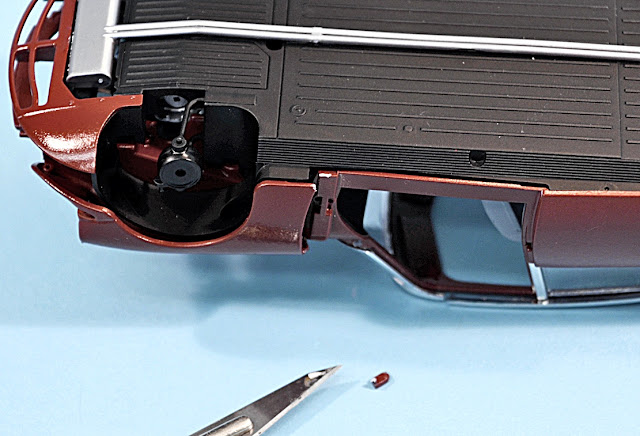 I chose a Citroen stock dark red - Humbrol Crimson - with a white roof. In the real thing, interior colours varied, and I chose two shades of grey. The dashboard, which was similar to the body in its sweeping design, comes with unique shift levers, and - another Citroen style of the time - a single-spoke steering wheel. 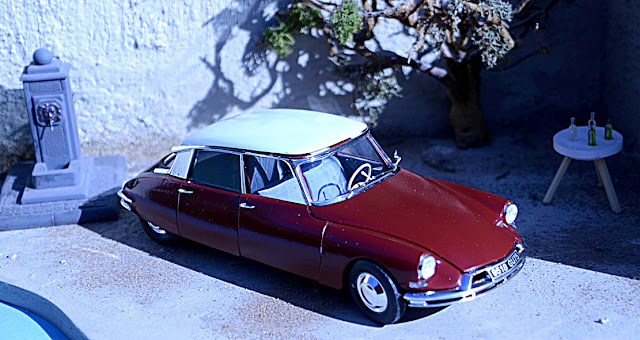 I made a diorama (above, below) to show the DS 19 in a suitably French town setting. The water fountain is a 1:35 scale Italeri item, but seems to fit visually. 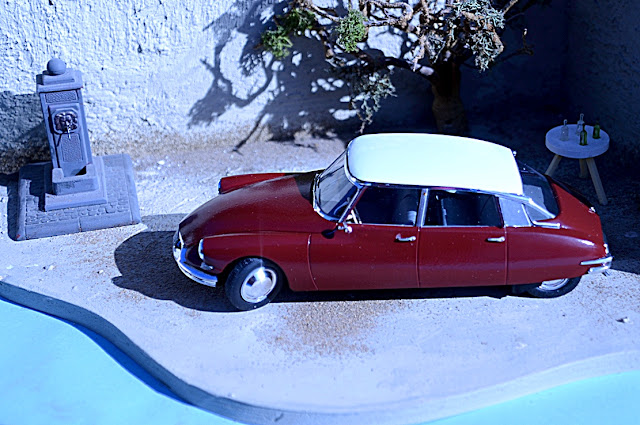 I added the bonnet support (below) making it from a piece of thin wire. 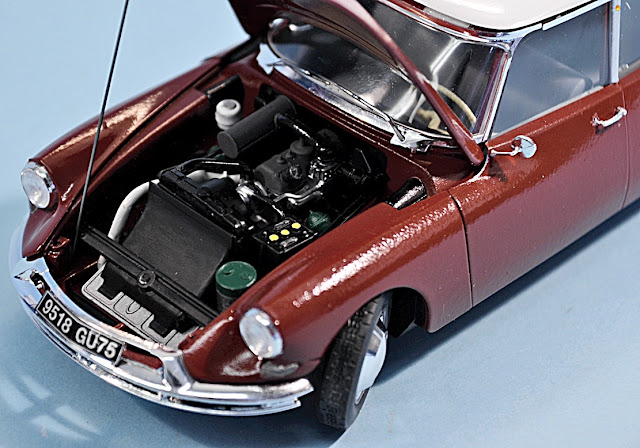 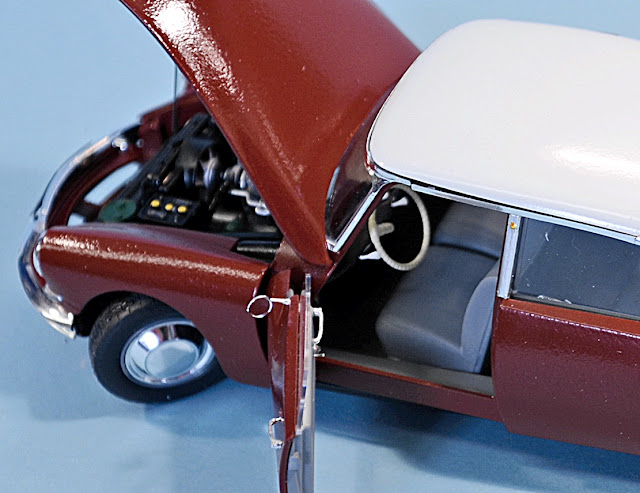 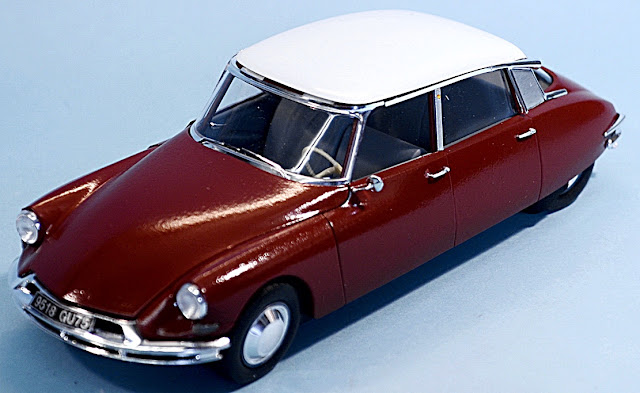 Note that some components  are not required for this kit. They are intended for a kit of the later-design DS 21, which Ebbro will be releasing soon.

Coming shortly from Ebbro is the Citroen Type H van (below). Long out of production, the vehicle is presently an ultra-trend set of wheels, earning new life in the mobile street-food trade. There's even a custom conversion to make a new Citroen look (somewhat) like the corrugated-metal oldster.

Until the Crepe Mobile is released, you can build the standard-issue Ebbro Citroen H. 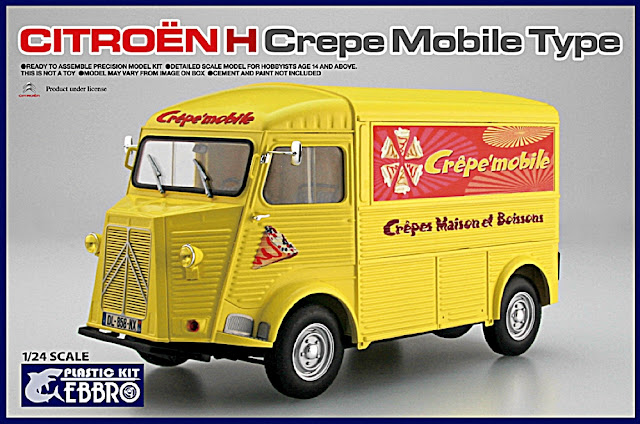 Thanks to The Hobby Company for the review kit