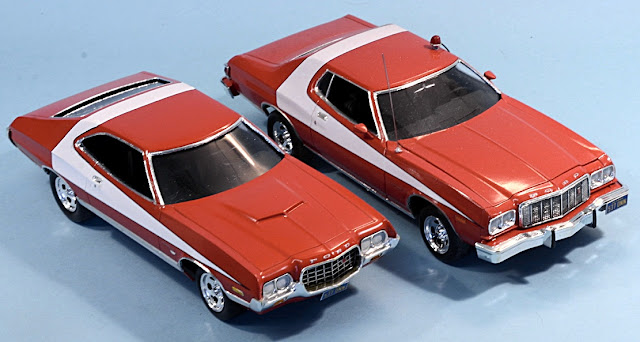 WHEN THE ORIGINAL TV SERIES STARSKY AND HUTCH was being made, the producers needed suitable wheels for David Starsky (Paul Michael Glazer), who drove the car.

Mat Irvine: The producers came up with the then current - 1974, later 1975 - Ford Gran Torino Sport. With the added white stripe, it became one of the most recognisable Star Cars ever, though it was only recently issued as a commercial kit, by Revell.

But… what if the TV production had been a couple of years earlier, what would Starsky have driven then? Staying with the Ford Torino, how about the 1972 version? This was arguably a more stylish design, even if it only lasted for that year. By 1973, the US Federal Government had introduced the infamous ‘five miles an hour’ front bumper, which had to withstand an impact at that speed without damage.

Consequently, bigger bumpers were introduced, which definitely spoiled the overall lines. But the earlier 1972 version was not shackled by this, with bumpers that flowed more naturally; the car also had a unique grille.

So, prompted by an article I’d seen in Collectible Automobile magazine, and the fact that Jo-Han had made the 1972 Gran Torino Sport as a 1:25 scale snap-kit, plus decals and spares from a same-scale Revell kit, I created a what-if car for the police duo.

The idea was prompted by the Jo-Han 1972 Torino, and the February 2011 issue of Collectible Automobile magazine (below). 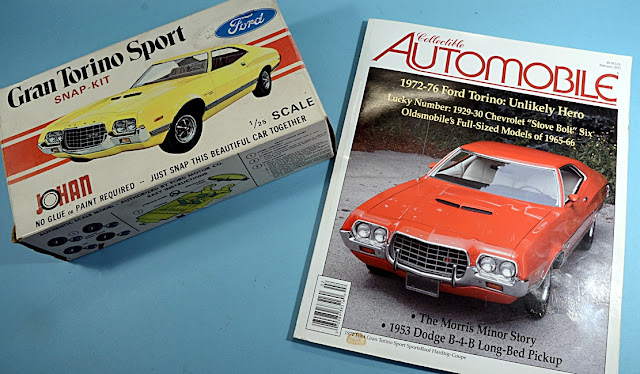 Jo-Han had produced a fully-detailed cement kit of the Torino, but the Jo-Han snap-kit (basically an  unassembled promo release) used the same body, though with no opening hood, no engine detail, and a one-piece chassis. Arguably I could have been placed it on a Revell Gran Torino chassis, but for this purpose, I was going for an overall look.

Jo-Han snap-kit box (below). There was also a fully detailed cement kit. 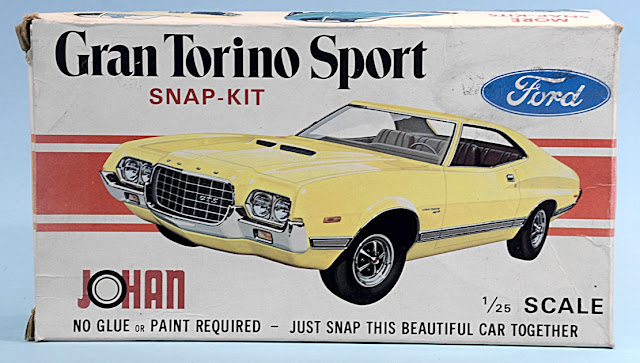 I painted the body in Humbrol gloss red, with the interior in black. My Jo-Han kit was missing a magnesium alloy wheel, with poor plating on the others - in fact, chrome plating was never a Jo-Han strong point! So I swapped these for wheels and tyres from the Revell kit. The red taillight transparencies were also missing, so it was time for a dive down the bits and pieces box for suitable replacements. Fortunately, 1972 Torino taillights were simple rectangles with just a slight curve at one end, so I could file and shape these easily from the spare set I found.

Completed conversion (below) and Jo-Han box. 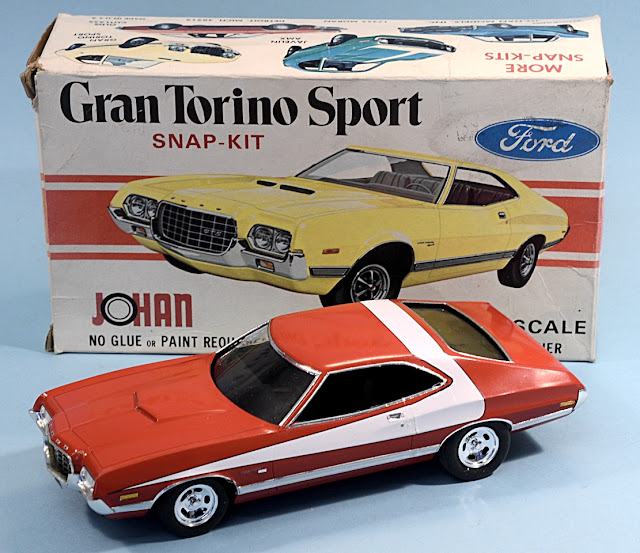 Of course, the model had to carry the distinctive white stripe, hence the ’striped tomato’ tag. I used the Revell decals, the two sides fitting more or less as intended, but the C-pillars of the two models are different, so a bit of cutting was required.

I used the F O R D lettering from the Revell decal sheet on the hood, and borrowed the Torino legend on each side. There is a third on the trunk lid, but I chromed it with BareMetal Foil. 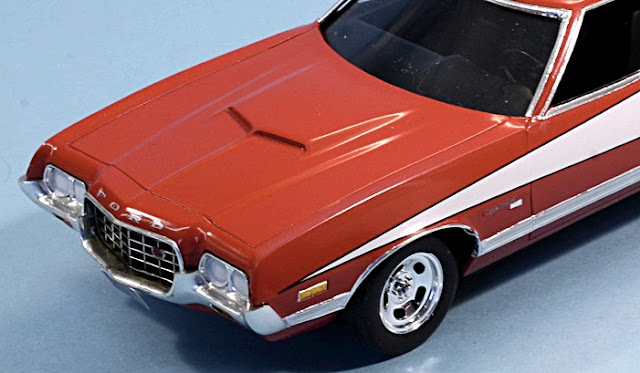 Completed conversion (above, below) Note the white stripe needed a bit of modification over the C-pillar, though the rest fits like a glove.

Compared with the Revell kit of the actual car, the 1972 version (below right) is smaller and I reckon better-looking than the 74/75 model that was actually used. 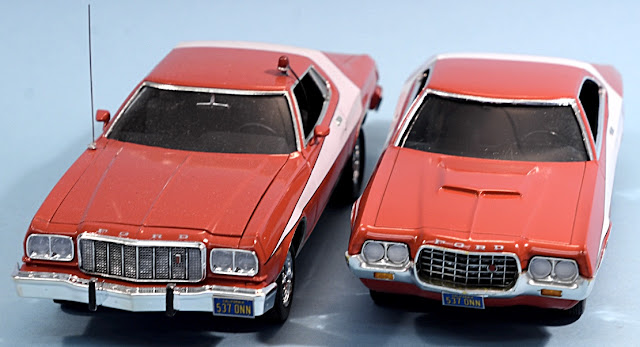 The completed kit (below) on a double-page spread from Collectible Automobile magazine. 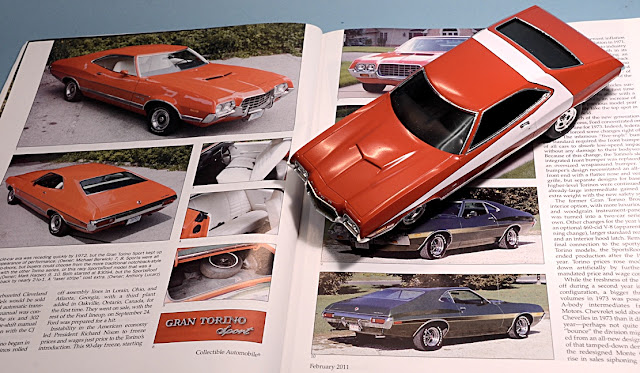 The windows surrounds were also similarly finished, and I used BareMetal Foil aluminum for the side flashes between the wheel arches. And that’s basically all I needed to do - and I think the finished result makes a far better ride for a pair of undercover cops!

SMN note: The original Starsky and Hutch TV series, with Paul Michael Glazer and David Soul, aired from 1975-9. A movie was also made much later, in 2004.

Click the YouTube vid (below) for two of the most famous TV cars ever, facing off at Rockingham Raceway, in the UK. Here, the TV series 5th Gear checks out the Starsky and Hutch Ford Gran Torino vs The General Lee Dodge Charger from the Dukes of Hazzard.