MAKE NO BONES ABOUT IT: THIS IS A DINOSAUR SKELETON KIT

THIS IS A REISSUE OF A KIT THAT GLENCOE issued way back when the company was new, in the late 1980s.


Mat Irvine: This latest Glencoe Stegosaurus is a reissue of an ITC kit, issued in the late 1950s. But being a skeleton of a dinosaur, that model timespan pales into insignificance, given the age of the original creature.

Parts layout (below). The small disks attached to most parts are there for identification, and have the part number embossed. 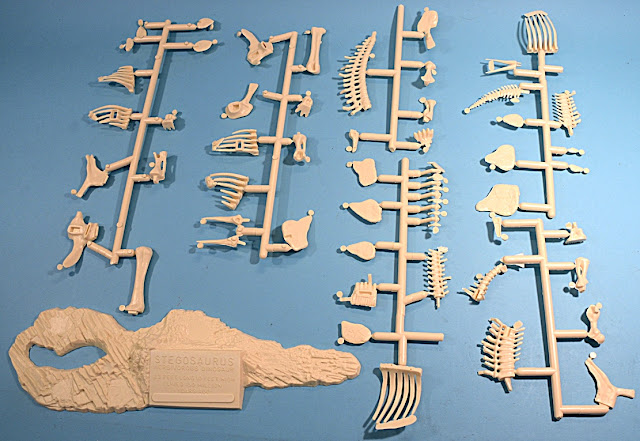 Model kits of dinosaurs are actually quite common. They hardly match the number of aircraft kits, but most major model companies have issued dinosaurs over the years. But kits of their skeletons? Well, these are the only ones. Ironically though, we can be certain of what the dinosaur skeletons look like, as we have many examples, but how the creatures looked when they were alive millions of years ago, well, that is a bit more uncertain.

The assembled but unpainted model (below). 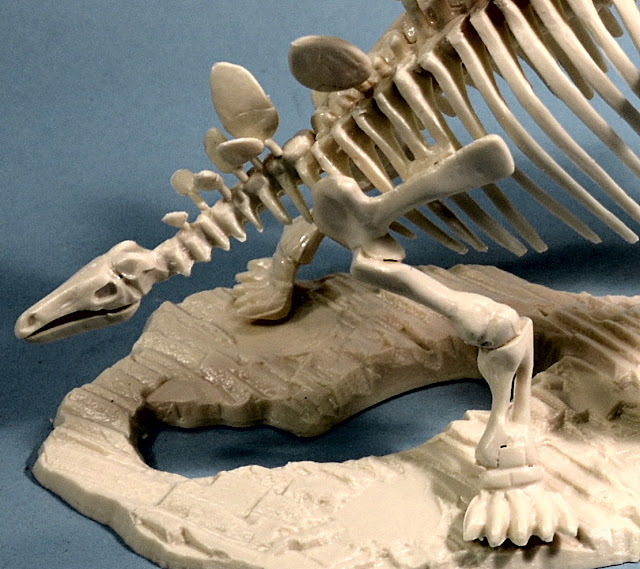 The kit builds into the skeleton of one of the oddest dinosaurs discovered, though considering how many odd dinosaurs have been discovered, that may be pushing designations somewhat. However, the herbivorous Stegosauruss had to defend itself against its more aggressive carnivorous cousins, and to this end it had a unique row of triangular plates that ran down its spine, and four massive spikes on its tail.

As for the kit, for its day the plans were very comprehensive, linked to each part being numbered as - given that it’s all bones - it would be easy to get parts mixed. Otherwise assembly is straightforward. The parts are mostly fixed together using pegs and recesses, though a few - such as the parts for the rib cage - use pins and holes. There is also a base on which to place the final assembly. The only slight problem is aligning the legs to fit the flat areas of the base, though frankly if the position is out slightly, it doesn’t really matter too much. 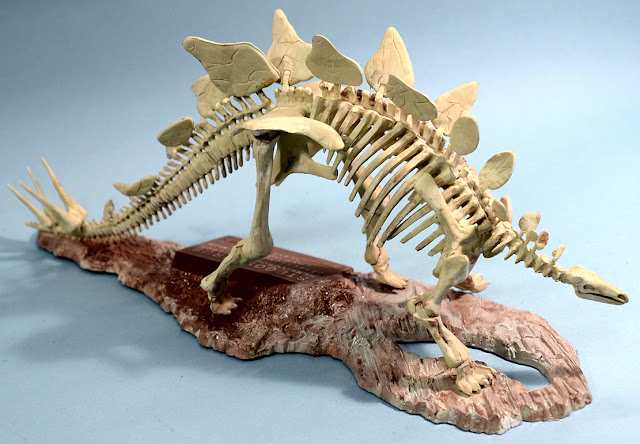 You get a comprehensive history lesson as well, printed in the instructions (below) linking the actual creature to what can be examined once the kit is built. Not many models do that these days! 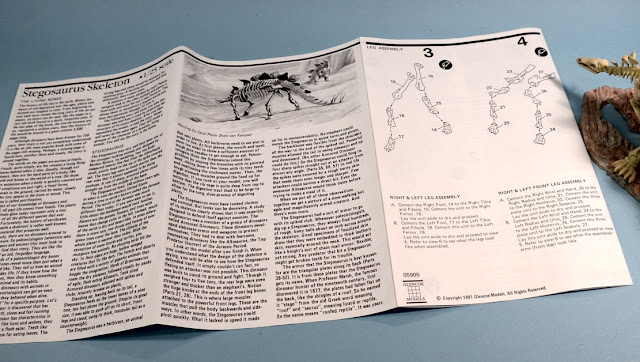 The kit is already moulded in a suitably ‘bone coloured’ styrene, though here I sprayed the Stegosaurus with Testors desert sand, which matches a bone shade closely. I used darker washes to bring out the details. The base was painted with Humbrol matt 70 with grey 160 dry-brushed over to give texture.

There is a descriptive plate built into the base, and here, assuming you want it to be readable, the best way is to apply a reasonably thick paint layer over the plaque, allow it to dry thoroughly, then gently sand off the tops of the letters using a piece of glasspaper attached to something flat. If you don’t have that flat ‘something’ you’ll sand off the gaps between the letters. An alternative way of display would be to spread the bones apart out over a base, and pretend you are a palaeontologist!

My usual disclaimer that I have connection with Glencoe Models and act as the webmaster at www.glencoemodels.com. Otherwise this is just a review of the reissued kit, and the build will mean some more images for the website.