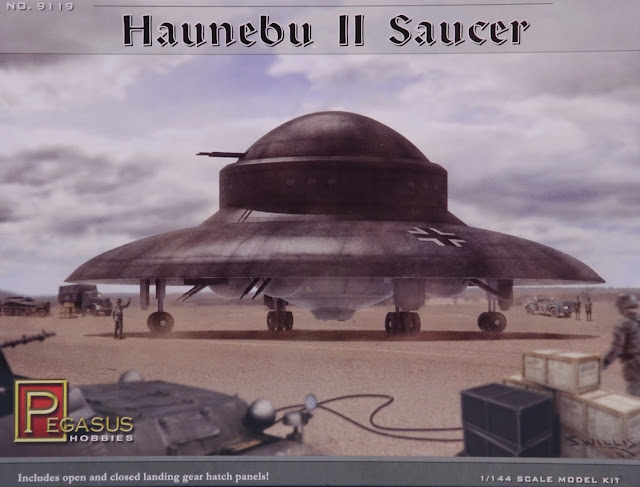 WEIRD DESIGNS ARE A FEATURE OF Luftwaffe 1946, aircraft designs that were being worked on toward the end of World War II. And perhaps the oddest Luft 46 project, and frankly least likely, was the Haunebu II Saucer, as featured in this 1:144 scale Pegasus kit.


Mat Irvine: Some Luft 46 designs are well-known, and in fact flew, such as the Me 163 Komet, Junkers Ju 287 and Bachem Natter. Others remained as paper projects, such as the Arado Amerika bomber, the Focke-Wulf eight-engine transport, various Horten designs, and many others. 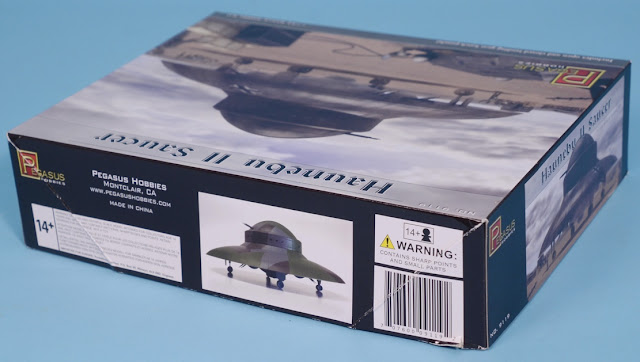 As for the Haunebu Saucer, there is no evidence that a flying saucer was ever designed or built. However, that hasn’t stopped model companies producing semi-fictional kits. The first of these was probably a resin model from the Hong Kong-based Anigrand Craftswork. Then the Japanese company Wave issued the first conventional styrene kit, though this hasn’t been widely available. Now Pegasus Hobbies has made the 1:144 scale version I feature here. 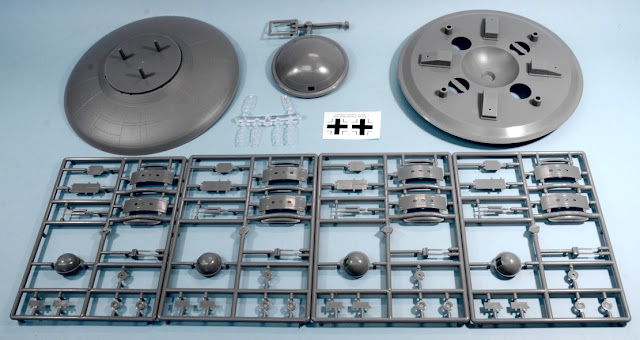 The Pegasus Haunebu is moulded in the usual Pegasus ABS, or acrylonitrile butadiene styrene, a tougher version of standard styrene. The kit requires liquid cement for assembly. The only option is to feature the landing gear up or down, together with open or closed gear doors.

Six window sections are fitted to the upper saucer hull, and note the square peg attachment points that fit downwards are the ones without bumps, so note that the instructions aren’t too clear on this point. The pegs with bumps fit upwards into the dome. 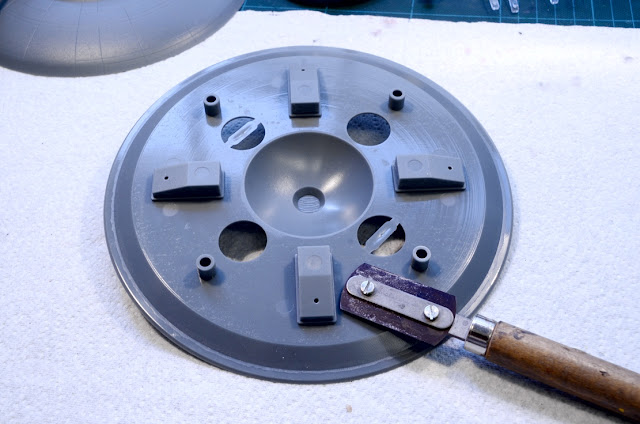 Note also you only need six window sections, of the eight included in the box. This is because the kit has four identical runners for wheels, legs, doors and gun turrets, which require four or eight of each. The top section needs six parts in total, so you will have two spare. The clear styrene windows are supplied as six parts, on a separate runner. The dorsal dome has a single twin-gun unit, the underside has four turrets. Watch the tips of the gun barrels, as they are thin and fragile.

Cutting and fitting the upper section walls (below). You get eight, but need only six, and watch which way up they fit. 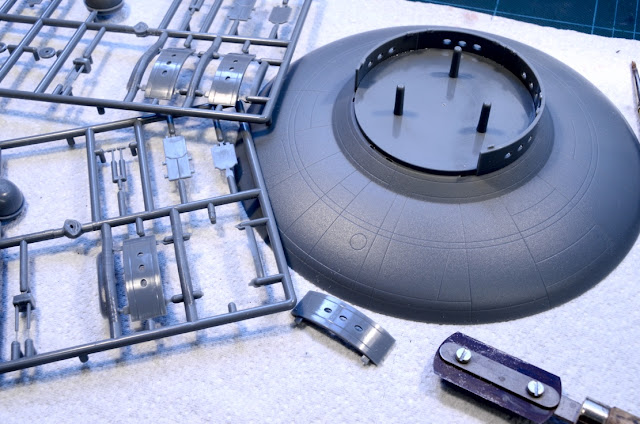 The single upper gun turret (below). The gun barrels are extremely thin, so take care not to snap them off. 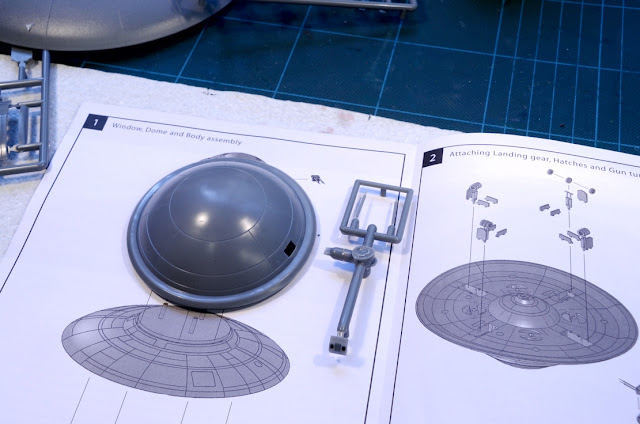 Undercarriage legs (below) are fitted lowered or retracted, and the doors fitted in place. 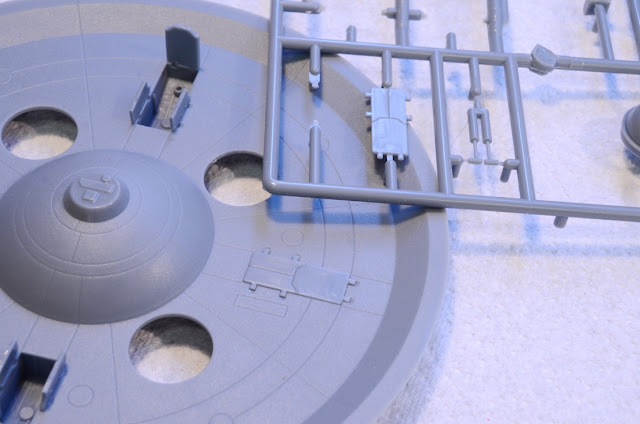 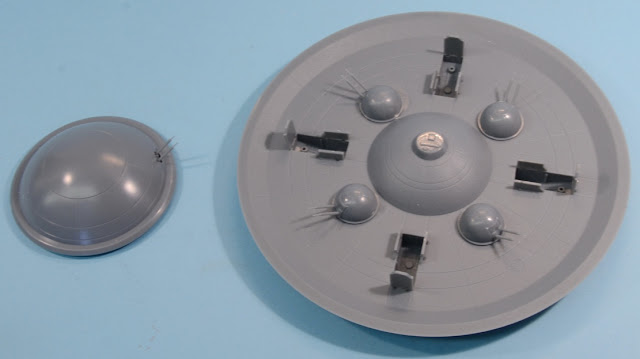 Painting is fictional, so anything that looks vaguely prototypical is suitable. I used a splinter pattern (below) in green, purple, and black. 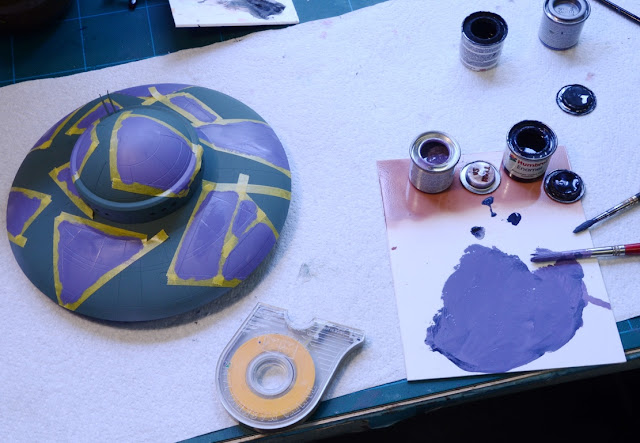 At this painting stage the windows have yet to be fitted, and the top dome is fixed temporarily in place. Lower surfaces were sprayed Humbrol 165, med-sea grey, while the upper surfaces were first sprayed Humbrol 30 dark green. The upper areas were then masked with Tamiya tape, and a dark purple (a mix of Humbrol 42 purple and 104 blue) painted on by hand.

When this was dry, the masking was removed, and Humbrol 33 matt black painted on. When dry, the supplied German flight markings can be applied, and a top coat of matt or satin varnish is then optional.  The dome can now be removed, the windows fitted, and the dome replaced. Finally the four three-wheel undercarriage legs are fitted into place.

I presented the Haunebu II in a possible scenario (pictures below) with a 1:144 scale Eduard Ju 52/3m to give a sense of scale. The hangar and equipment are Revell aircraft accessories. 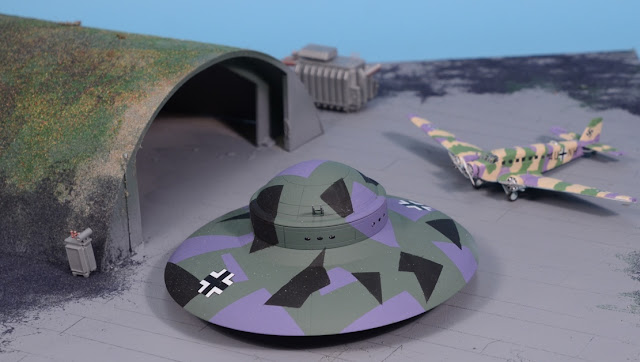 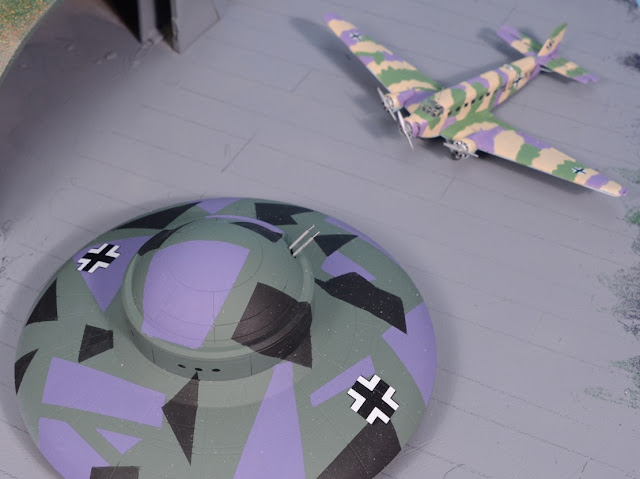 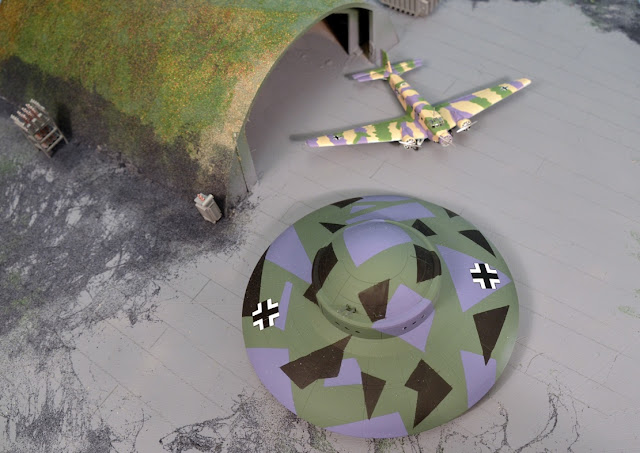 The finished underside (below) with landing gear and legs fitted in place. 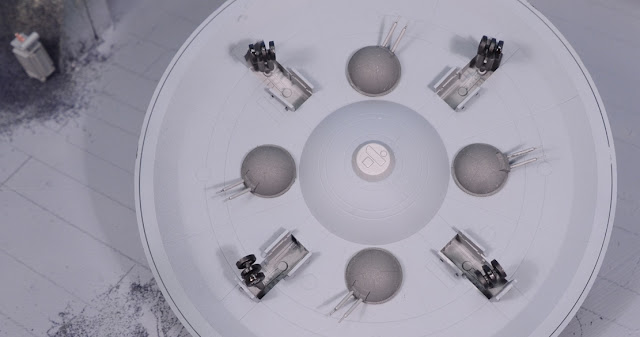 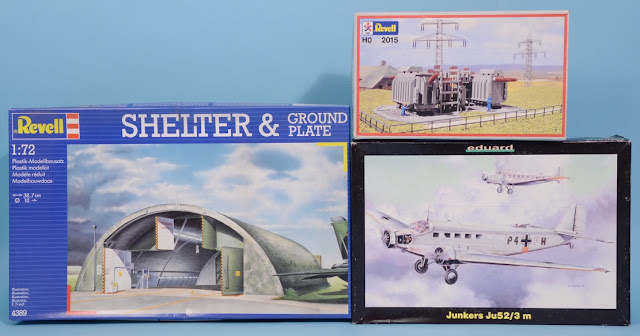 About the Haunebu Saucer
So did any of these disc craft get built and flown? Almost 100 percent certainly not, but it didn’t stop Allied pilots reporting seeing various odd-looking craft during World War II, which were nicknamed foo fighters. Luftwaffe pilots also reported equally mysterious sightings, assuming they were of secret Allied aircraft, so the real answer is… who knows?!

And if all this seems familiar from the 2012 Iron Sky movie, yep, the featured hardware looked similar, and Atlantis Models has made a limited-edition resin kit of the biggest version, known as the Valkyrie.

Summation
Overall, an interesting kit of an intriguing subject.

There’s one more new kit of a Haunebu, recently issued in 1:72 scale from Squadron. If we can get one, we’ll bring it to you. However, whether you file the Haunebu as a World War II aircraft, a prototype, or a science fiction machine is up to you.

Here's a four-minute clip (below) from the 2012 Iron Sky movie. There's a follow-up due soon, which looks amazing.

Thanks to:
Larry Thompson at Pegasus Hobbies.
Pocketbond, the UK importer and distributor of Pegasus.
Paul Fitzmaurice of littlecars.com for the Ju 52/3m kit.