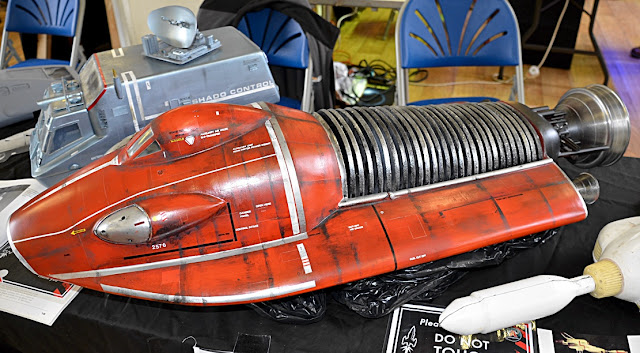 HERE ARE JUST A FEW OF the exhibits at smallspace 6, the ‘Big Little Show’ held in the village of Hanslope, UK, last Sunday, July 16, 2017.

Mat Irvine: Smallspace has grown and grown over its six years, but despite that, the event still maintains that it is the ‘Best Small Space, SF and Fantasy Show.’ 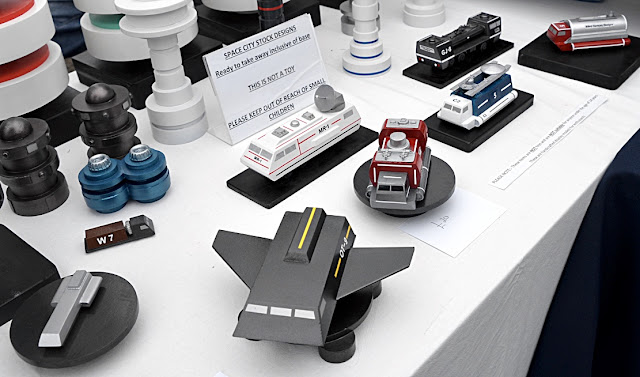 Special guests at smallspace 6 were Tony Harding (below left) ex-BBC Visual Effects (VFX) Department, who designed the original K-9 for the Doctor Who story The Invisible Enemy in 1977. Mike Tucker (middle) was also with the VFX Dept. Mike now runs The Model Unit, and in 2006 created the ‘rusty’ K-9 version for the ‘New Who’ episode School Reunion. Also in the pic is actor John Leeson (below right) who is the ‘Voice of the Dog.’

All three are deciding which of the ‘Guest K-9s’ will be awarded the special prize - Best Dog in the Universe.

Winner (below) of the other award - Best in the Solar System - was Mamas Pitsillis with his magnificent radio-controlled Skydiver from the Gerry Anderson UFO series. 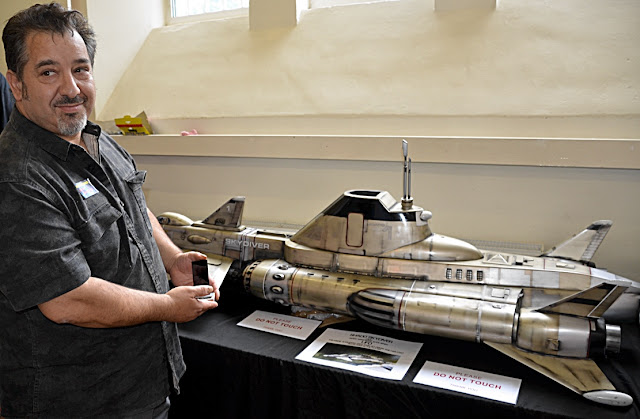 Regulars at the show included David Sisson (below in blue t-shirt) and Simon Rhodes, with some of David’s creations. 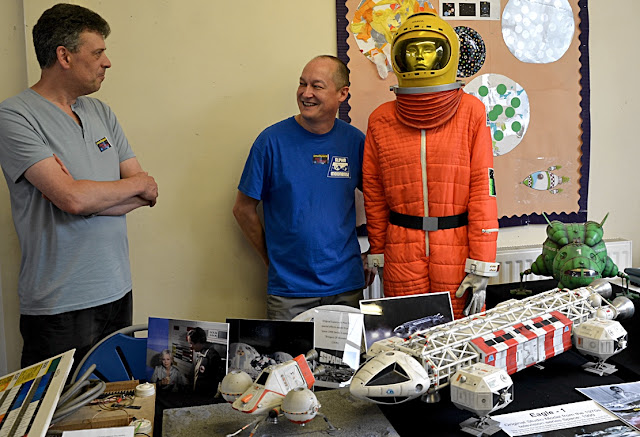 Guests pose (below) with Davy Limburg (middle) of the online store Sante Claus and some Doctor Who memorabilia. The show's co-organiser Mat Irvine stands at right. 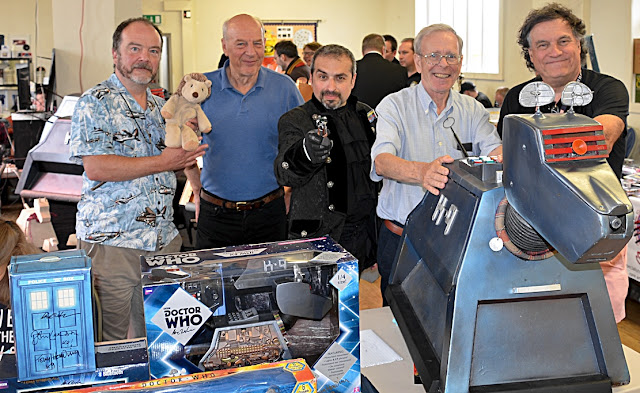 A Mechagodzilla costume (below) from Stephen Billings became a *sorta* show mascot, even if it wasn't a K-9. 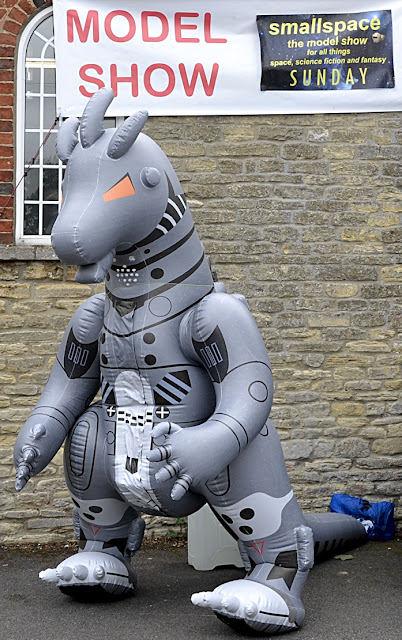 They meet at last! A steampunk Dalek (below left) by Mark Enright of PodPad Studios, and Davros, built by Steve Fletcher 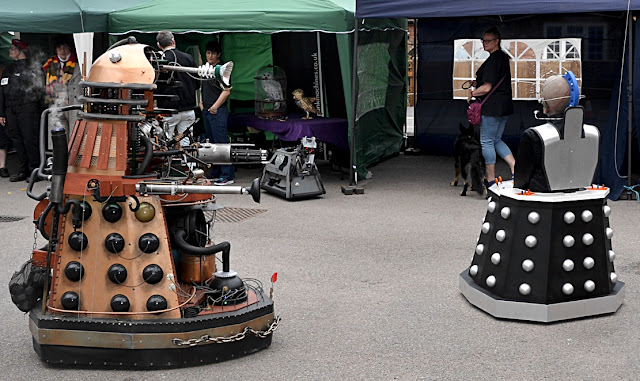 The IPMS Middleton Cheney club display (below) featured the USS Enterprise and more. 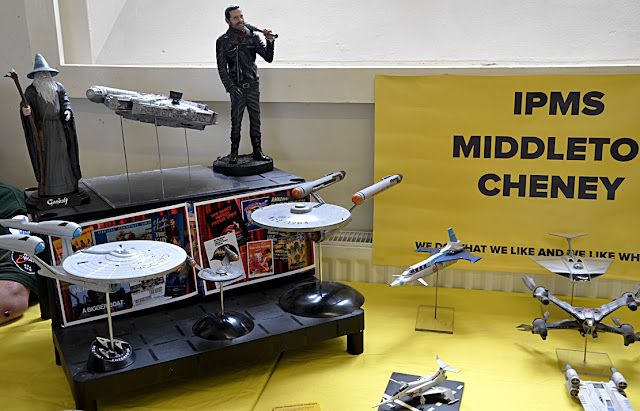 When K-9 meets the Borg (below) you get ‘K-7 of 9’. Model courtesy Mark Enright and PodPad Studios 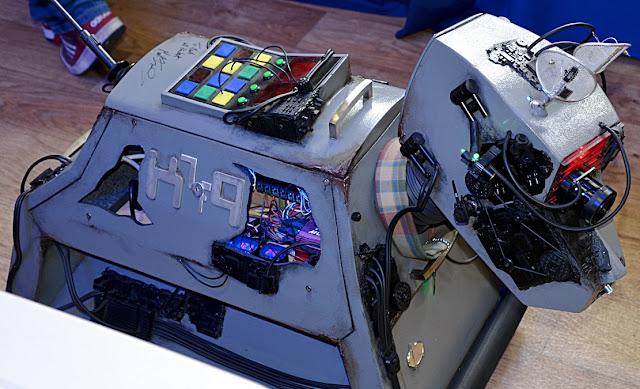 Richard Ashton's scene (below) from The Dukes of Hazzard is relevant to smallspace because the seated figures are modified Han Solo and Luke Skywalker miniatures. 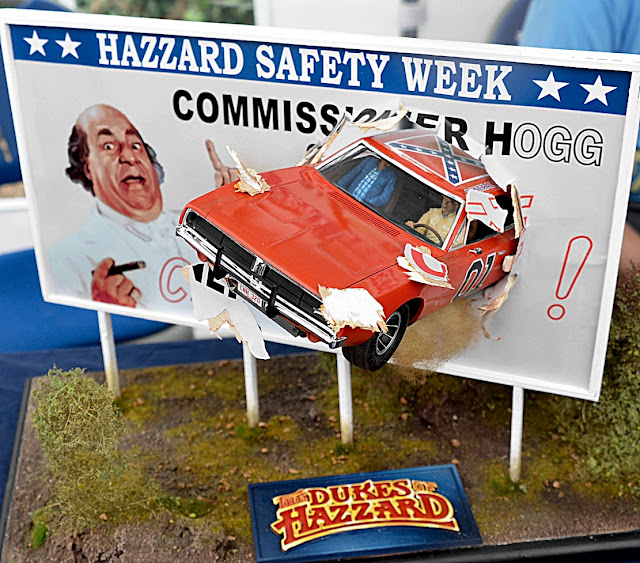 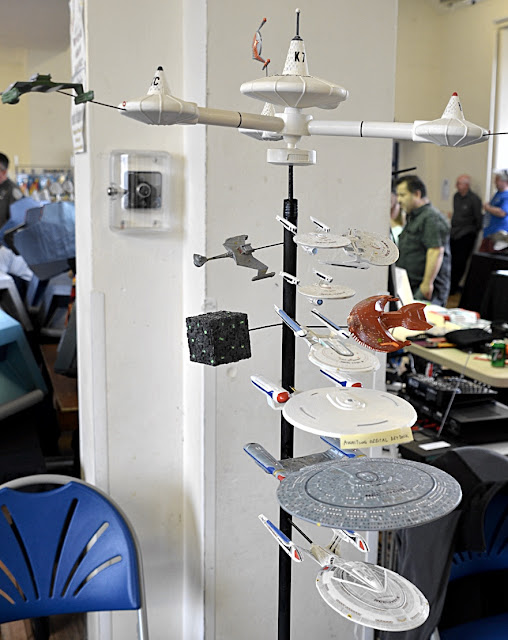 The Lunar Module from Gerry Anderson’s UFO (below) was built by Pete Hutton of the West Middlesex Scale Model Club.

Martin Higgs (below) runs the ‘What If?’ SIG (Special Interest Group) of the IPMS. More fantasy aircraft that might have been are featured here. Note the two Haunebu flying saucers at right. 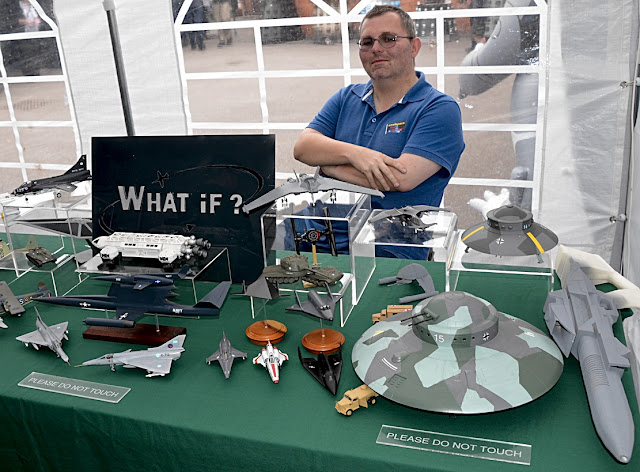 Click here for more pix and full report on smallspace 6.