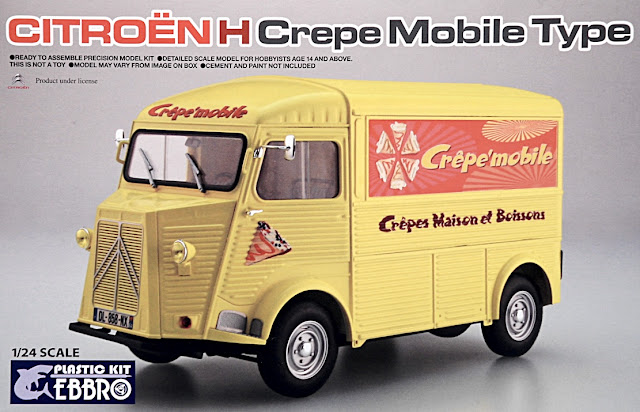 MODEL KITS OF THE CLASSIC Citroen H-Type van have been a bit like waiting for the proverbial bus. You wait ages when nothing appears, then several turn up at once, or in this case two Citroen Type H panel vans.

Mat Irvine: After years of being ignored by Heller, the French manufacturer did finally produce the common HY version. Now Ebbro of Japan has followed suit with its own model. Incidentally, these are not the same kit, each company having worked independently.

The Ebbro kit components (below) are neatly moulded, with no particular assembly issues to worry about. 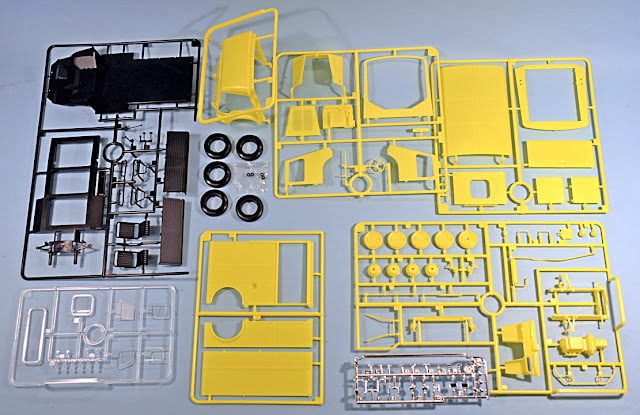 In fact, this latest 1:24 scale Crepe Mobile is the second Ebbro issue. The first kit was a non-specific panel van. Unlike Ebbro’s other 1:24 scale car kits (or the Heller version) this Type H does not have a separate engine. The bodywork is multi-piece, with the distinctive corrugated panels that say ‘Citroen’ crisp and well defined.

The kit’s paperwork (below) includes an instruction booklet and two decal sheets. The Crepe Mobile markings are for this particular kit, while the second sheet has more general markings. A radiator frame and photo-etch fret are also supplied. 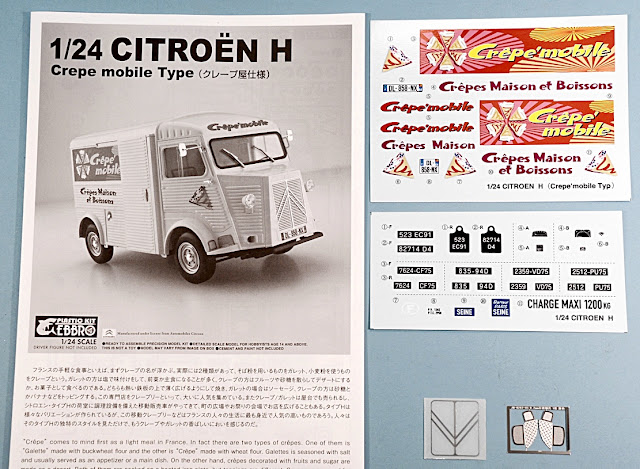 The running gear is simplified, though being front-wheel drive, the rear axle is there primarily to hold the back end up. The front wheels are steerable, and there is a separate exhaust system. With no engine supplied, there’s no opening bonnet, though the radiator and ventilation motor are supplied on a separate panel behind the grille. Frankly though, these are hardly discernible.

The metallized decal (below) for the classic Citroen logo, on its sheet before application. 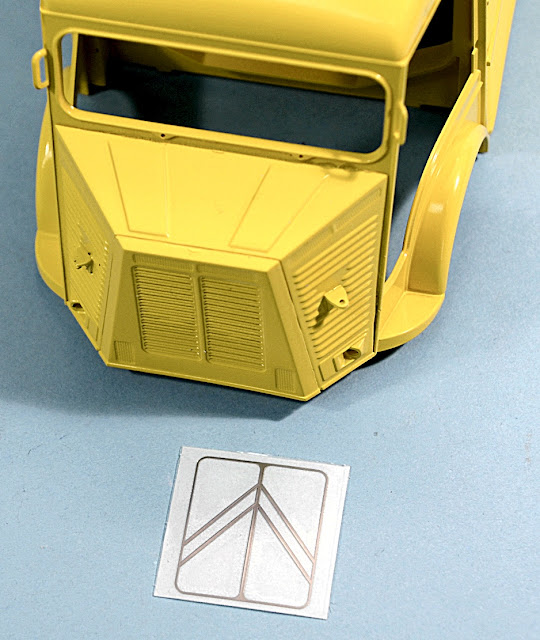 Inside the model, there are two seats, and driving controls, with two sets of instrument decals. And that about it.

The Ebbro Crepe Mobile is moulded in yellow for the bodywork, black for the rest. The windscreen and rear window glass need their edges blacked. I used the black-chrome version of Bare-Metal Foil.

The chassis and interior finished assembly (below). 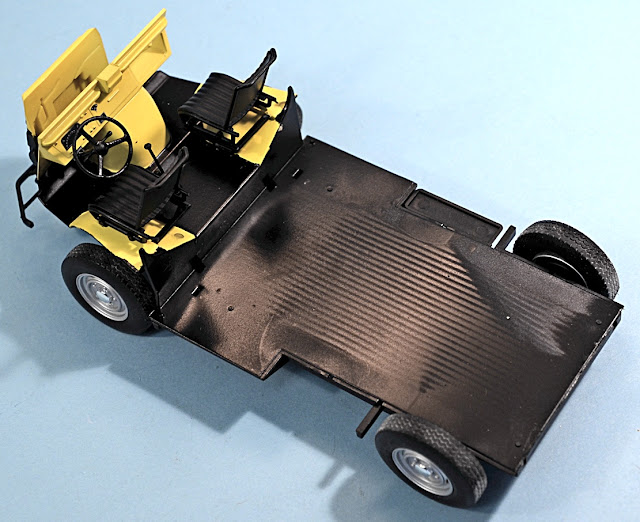 All doors - driver and passenger, side and rear, the last of which is in three parts - can be positioned open or closed. You have to decide which, as pins for the open version need removing if you want them closed. Neat touches are the metallic decal for the double-vee Citroen grille outline, and photo-etch parts are supplied for the side-steps.

The completed underside of the vehicle (below). 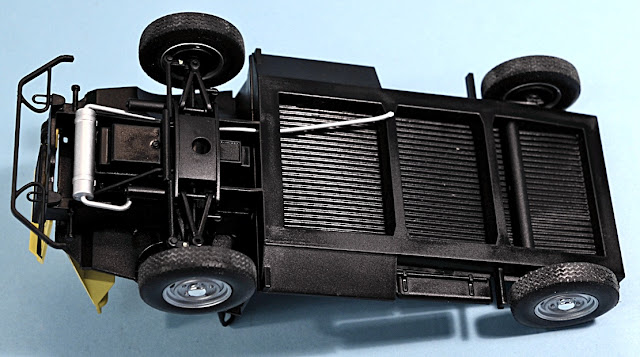 Decals seem to be for a generic Crepe Mobile, though these these particular ones could be for a existing food company. Ebbro has form in this regard, as its Citroen 2CV van kit was produced with the markings of a UK garage. In any case, you will need decal softener to get the crepe markings to seat snugly over the corrugations of the body panels.

The completed bodywork and chassis (below). The doors are yet to be placed in position. 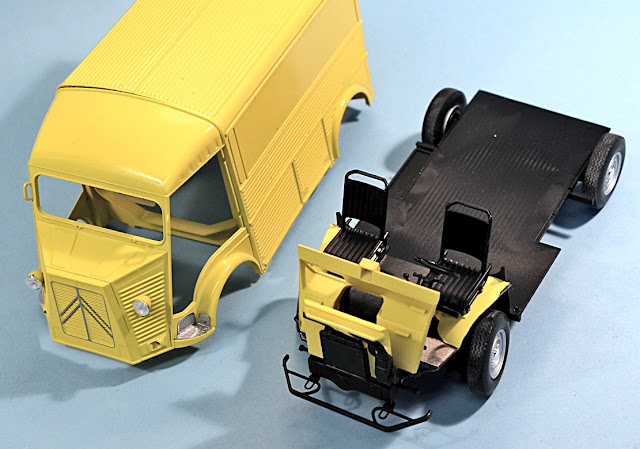 The completed model (three pix below) with decals applied, and all doors fitted in the open position. If you wanted a door closed at a later date, it would be simple to gently break the cement joint, remove the pins, and then refit. 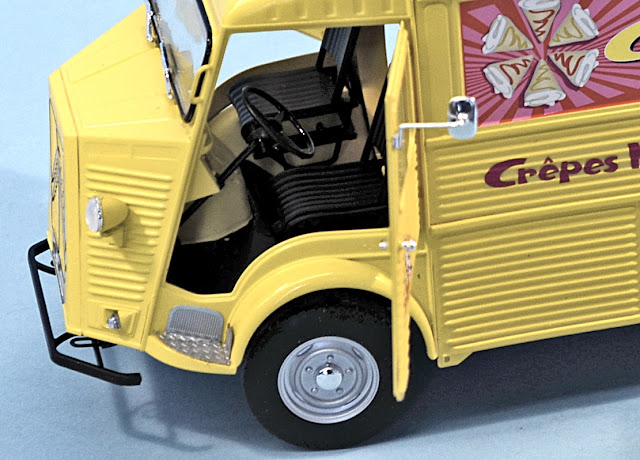 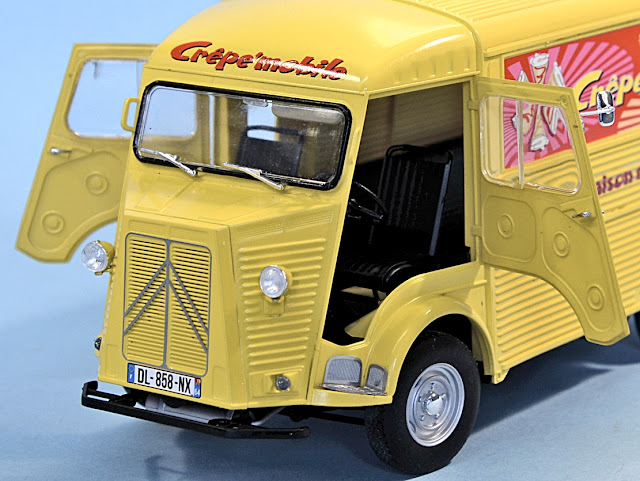 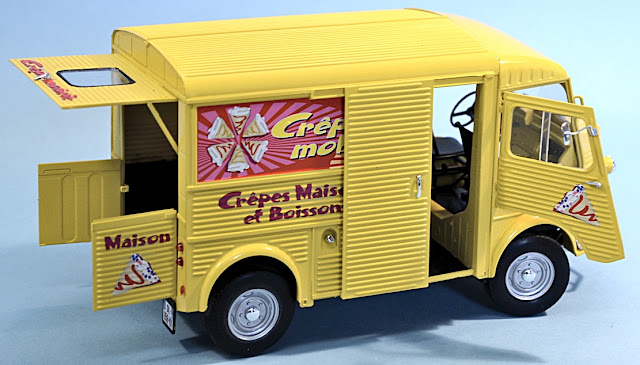 Here’s my diorama (below) of the Citroen Type H in a French village setting. The fountain is a 1:35 scale Italeri military accessory, but looks convincing enough in this larger scale. 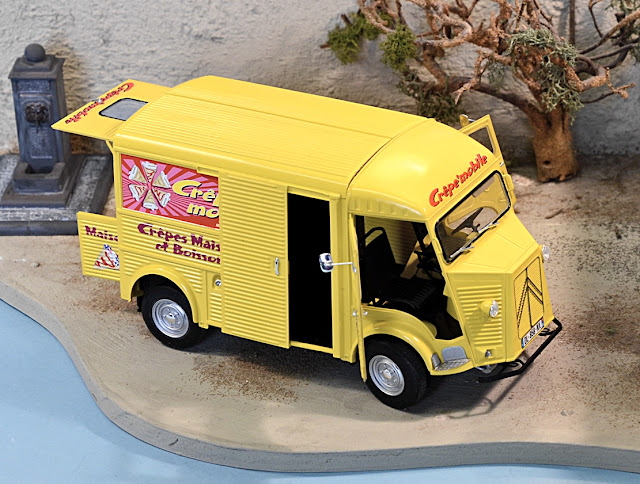 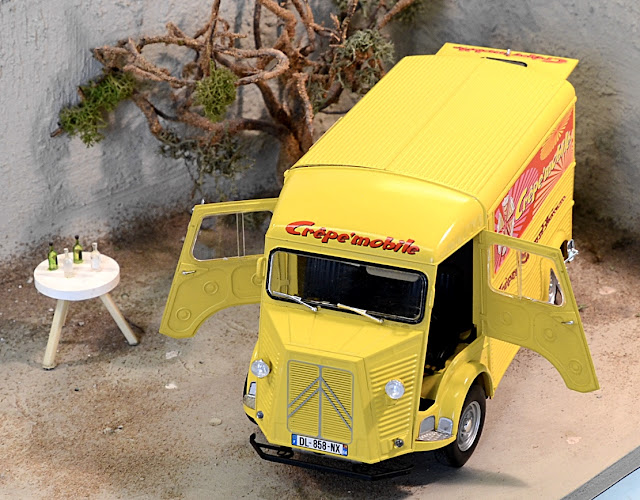 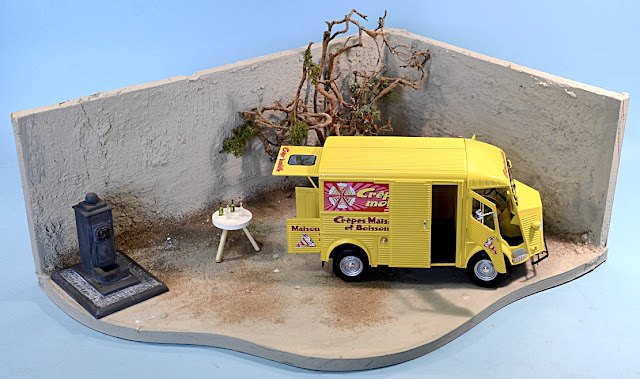 Next in the H-Type line from Ebbro is a mobile kitchen version, complete with a full interior. I can’t wait for that!