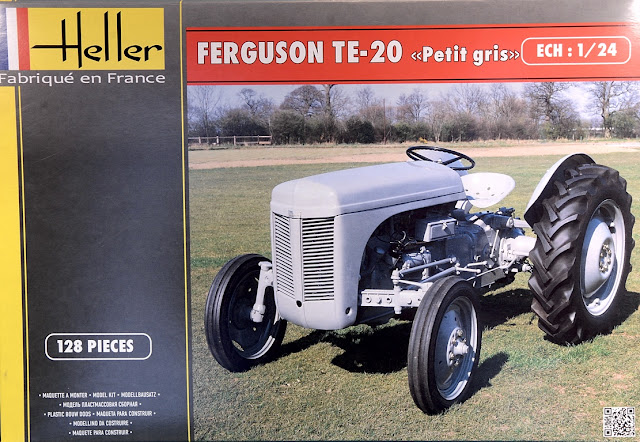 THE SURPRISE is not that Heller features a piece of farm machinery - Ertl has been specialising in such for years - but that this French company has released an archetypal British tractor.


Mat Irvine: The story of the Ferguson TE20/FF30 ‘Little Grey Fergie’ is a cosmopolitan tale. It was designed and built in Britain by an Irishman, using local manufacturers around the world to make their own versions, including France. So the Heller connection is understandable.

What you get in the box (below). The components are moulded in 'Fergie' grey, plus vinyl tyres in black. Note there are alternative tyres provided as a front wheel option. 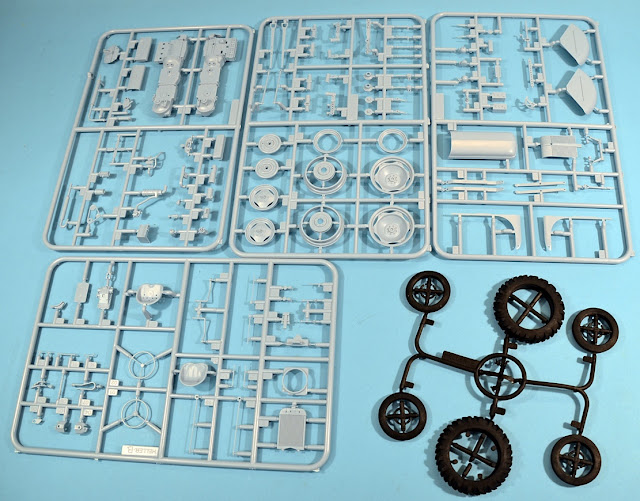 The immediate comparison of course - if your memory goes back that far - is with the first-ever Airfix kit, the Little Grey Fergie tractor of 1955. Its 1:20 scale was larger, but Heller has logically opted for the somewhat smaller standard 1:24 scale, albeit far more detail has been included.

Front page of the instruction leaflet (below) repeats the box photo. 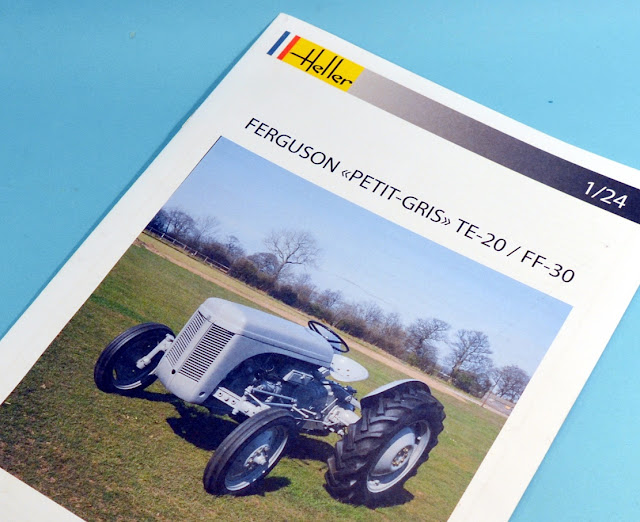 Actually, the engine and transmission components do mimic the Airfix kit, as they are basically the same - a left half and a right half - but Heller has added separate rocker and transmission covers. The ancillary equipment is also composed of separate parts, such as the oil filter, starter and distributor. The original tractor was petrol-fuelled, not diesel, so you can add detail to the Heller model by wiring the engine with plug leads if you wish.

Painting instructions (below) include the two-tone FF30 version. 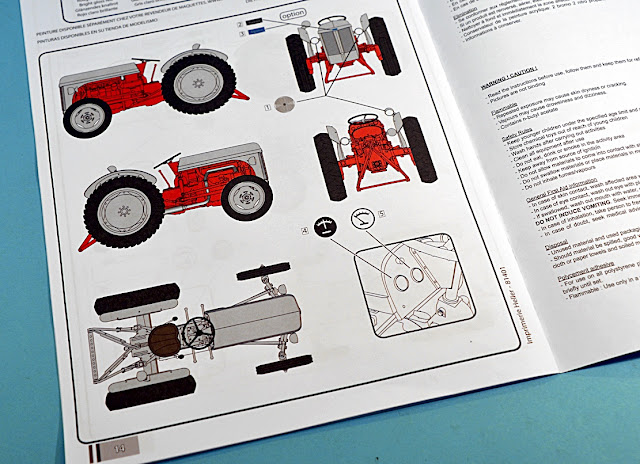 Some parts are extremely small and fiddly, such as the various pedals and foot rests, but the moulding is good, so you will just need care when cutting them from the runners. The wheels are intended to rotate, but the design is not as efficient as it could be, especially the way the rear wheels fit the axles: the area allowed for cement is far too small to allow the axle to rotate. But as usually applies with a static kit, rotating wheels could be considered something of a luxury. The same applies to the steering linkage and suspension, which could be made to work, but frankly, it’s not worth the effort.

The fitting of these suspension components is also where the instructions fall down slightly. The outer front axle is intended to fit right up to the end of the inner axle (section 34 and 36) but there’s not enough room to do so. Instead, the outer sections sit halfway along the inner section. And section 53 indicates a tab on the front which fits into the main bonnet. But no it doesn’t , instead needing to be cut off. Having said all that, these are relatively minor irritations which do not spoil the finished tractor. 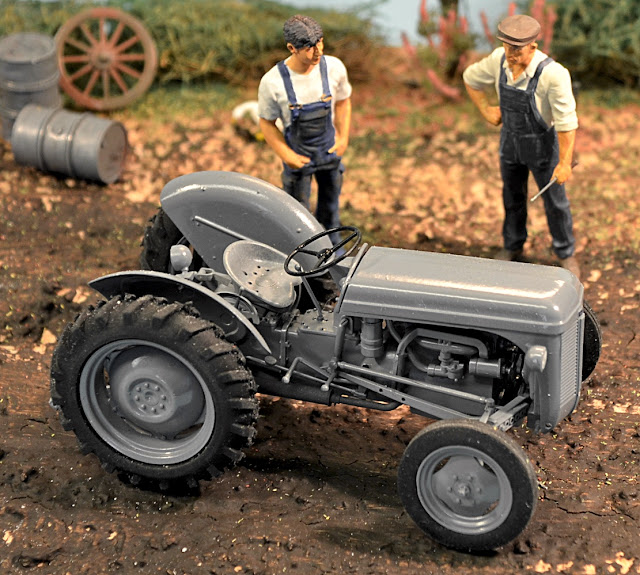 There are two basic ways to complete the model. One is the original Little Grey Fergie which is grey virtually all over, and is termed the TE20. The French-built FF30 version had changes that included a different seat suspension and steering wheel, but is mainly distinguished by the fact that the chassis and engine are painted red, not grey. Options for either version include added headlamps, different front tyres and exhaust setups, and whether a towing hitch or towing bars should be fitted.

I finished this kit as an original TE20, using Humbrol primer. I used Testors gloss gray for the top coat, as the Humbrol equivalent was a tad too dark. 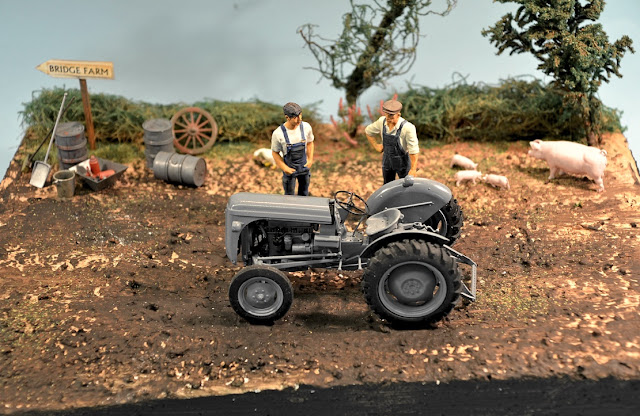 It’s not often that you can link a star vehicle to a radio show, as most are film or TV-related. However, the Fergie is often mentioned in The Archers, a daily drama from BBC Radio 4. In the series, Tony Archer has acquired a Little Grey Fergie, even though his elder son, John, was killed in a rollover accident. when it rolled over. However, that macabre event happened nearly two decades ago, in 1998.

You could argue that it’s only a story, but as any Archers fan will tell you, it’s far more important than that!

I finished the Fergie in a suitable rural setting, Bridge Farm from The Archers radio show. The animals are from the Tamiya livestock set. They are actually 1:35 scale, but animals tend to adapt as necessary. Barrels, tools and such are from two Italeri accessory sets, military and truck accessories.
The figures are John Archer (left) who is originally Lucas from Scale Production generic figures. At right is Tony Archer, adapted from the mechanic supplied with the ICM Henry Ford set. Both figures are conveniently wearing overalls. 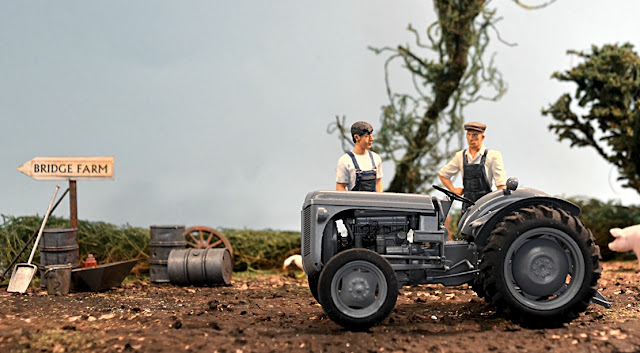 The obvious comparison with the Airfix kit from the 1950s (below right), usually reckoned to be 1:20 scale. Both tractors are painted the same Testors shade.