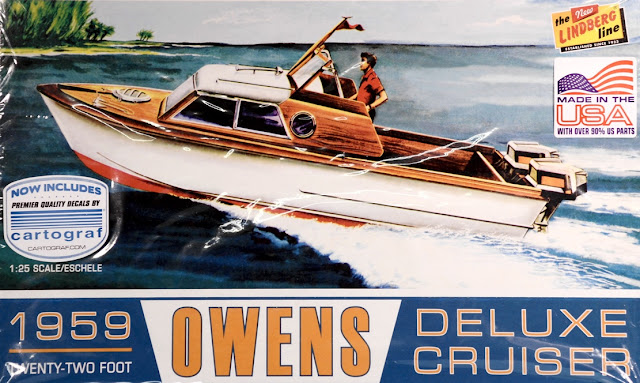 THIS IS A COMPANION KIT to the Lindberg Century Coronado, as featured in SMN a few months ago.


Mat Irvine: Both kits originated with Palmer in 1960 and have come to Round-2 via Lindberg under which label (or rather, The New Lindberg Line) it now appears. The Owens has fewer parts than the Coronado, but the moulds appear to have survived better, as there is far less flash. The 1:25 scale is slightly debatable, but that can wait for the moment.

The box art is based on the original Palmer illustration. The ‘Made in the USA’ and Cartograf details are stickers on the shrink-wrap. The box base (below) has extra information, colours, and specifications for the actual craft. 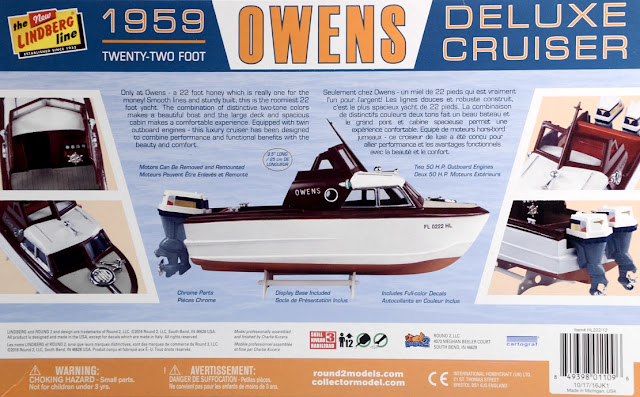 The Owens is an outboard-powered boat, with two large engines. Of the period - 1950s - these could be one of the main names, such as Mercury or Johnson. They could also be Evinrude, a brand that is the third boat kit Palmer made, but for which the tooling can’t be found.

The engines are somewhat unrealistically chrome-plated, left over from the original release, but, apart from the propeller, tinted in bronze, the engines can safely be painted with more appropriate colours.

Parts layout (below) less in number than with the Coronado - and with less flash. 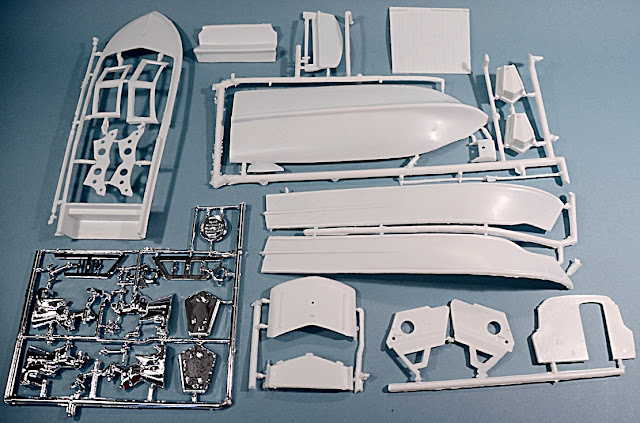 The hull can be assembled without the main deck in place. There is a demarcation below the water line, where that colour is usually dark red, or similar. The upper hull is gloss white, and is not too bad a fit (considering the age of the tooling), but still requires a small amount of filler in places. Once smoothed over, it can be finished in gloss white, then when thoroughly dry, the underwater section can be masked and painted in dark red. I used Humbrol matt German Red.

Instructions and decals (below) plus a polythene bag containing pre-cut clear acetate to fit the windows. 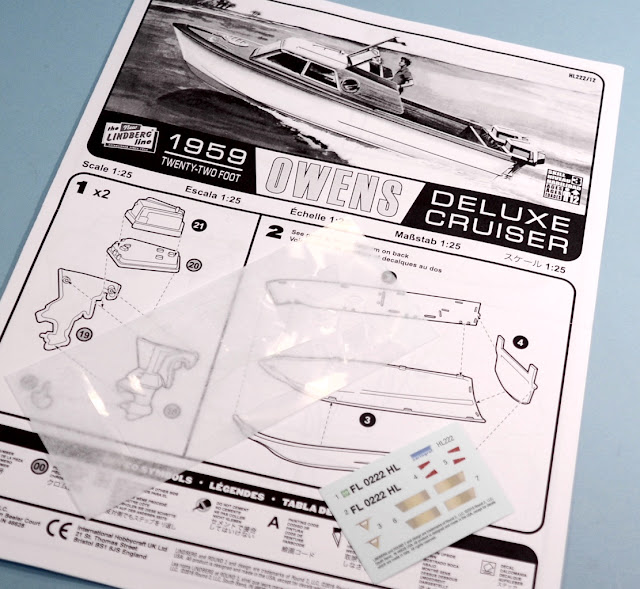 The cabin and roof areas are slightly tricky to fit correctly, which again points to the age of the original kit. This area is also gloss white, but the main superstructure and decking is wood, which allows some experimentation with texturing, though I sprayed this particular model in a gloss brown from Testors. The side cabin windows are chromed, whereas the two windshield frames are wood finish. A useful new item with this kit is the pre-cut acetate sheet for the windows and portholes, which can be fixed in position with a modelling contact adhesive. Other small details are included, such as navigation lights, anchor, horn and mast.

Assembly of the outboard engines (below). The parts are chrome-plated, except for the engine covers. 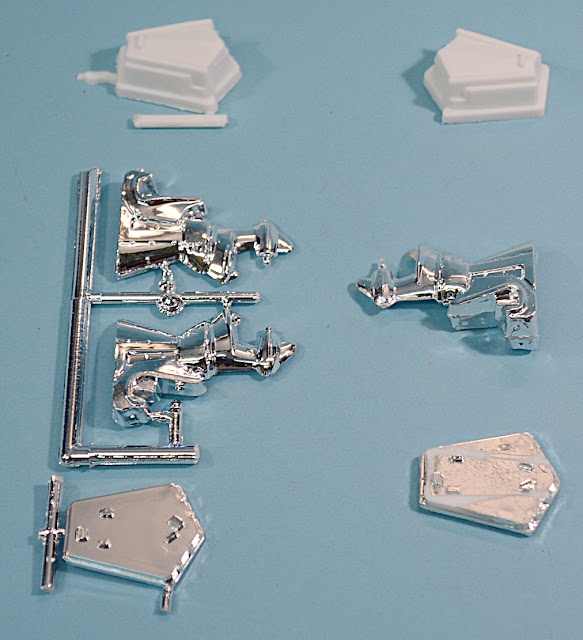 New decals (Palmer supplied none) are provided for small details on the engines, and the registration number. The OWENS letters on the side of the cockpit are raised above the plastic. They can be picked out carefully with paint, or perhaps sanded off and replaced with new decals, using a word-processing program. Or you could simply omit the  name, as it is not shown on the box art.

The completed model (below) has the same stand supplied as the Coronado. I added the anchor rope, otherwise everything comes in the box. 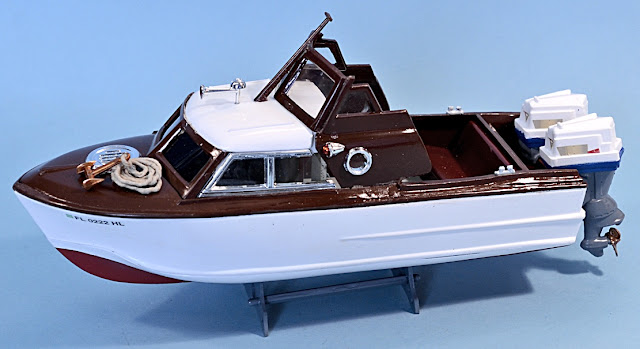 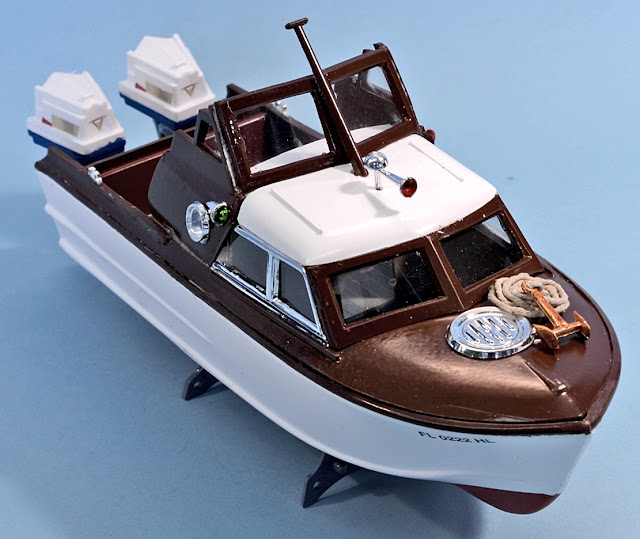 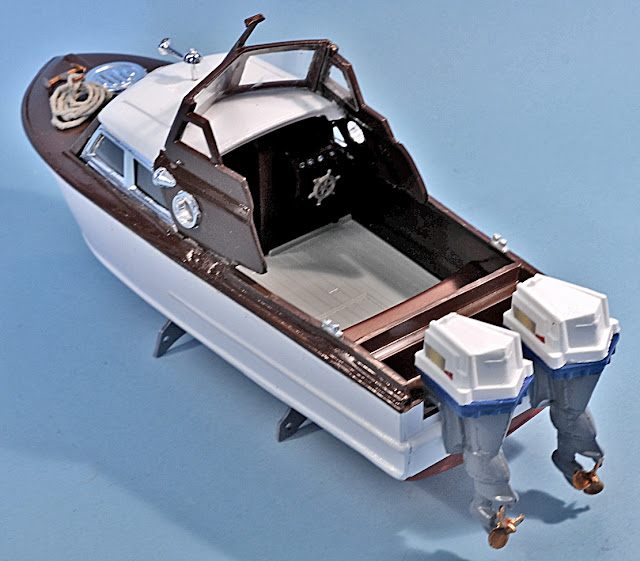 And the scale? Well the real thing is described as a ‘Twenty-Two Foot’ vessel, which would normally be measured from bow to stern, without the engines. On the model, staying with Imperial measurements, this is 8.5 inches, which works out to more or less 1:30 scale, and Palmer listed it as such. Round 2 lists the scale as 1:25 scale, but the model looks like it could be larger. So something is out somewhere, but as I’ve said before with boats - as against cars - scaling is far more flexible, so 1:25 works for me. 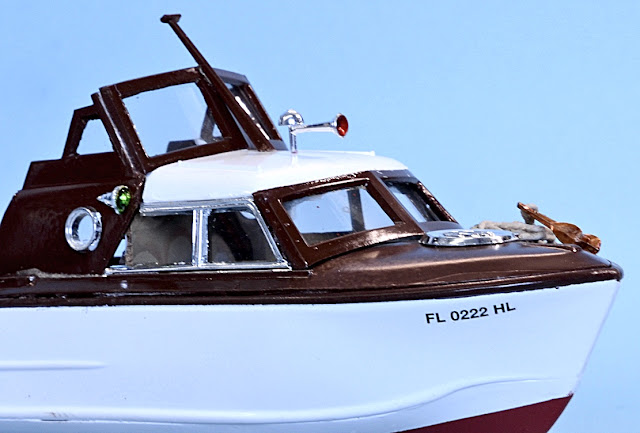