THIS IS A REISSUE OF an original Aurora model that first appeared in 1965. It’s a very simple kit, with none of the options you might find on more modern equivalents, so there are no poseable flaps, opening engine covers or similar, but frankly that makes for a far more robust model. The box-art reproduces a classic painting by illustrator John Amendola.


Mat Irvine: Atlantis reproduces an original Aurora kit, this one in the distinctive bright yellow and purple of the airline Hughes Airwest. However, you also get another set of markings, in fact the first airline scheme Aurora issued, that of Trans World Airlines (TWA).

The kit is moulded in white plastic (below) with one clear part for the flight deck windows, making any scheme you choose easy to paint. There are no separate components for the passenger cabin windows, instead these being supplied in decal form for each side. Having a decal for this purpose is no bad thing, and is is still done with some much newer airliner models.

Atlantis has moulded this reissue in white (below) so the TWA version can be completed easily. The Aurora original was moulded in yellow, a plastic shade that’s not easy to camouflage. Note the single flight deck window in the middle of the components below. 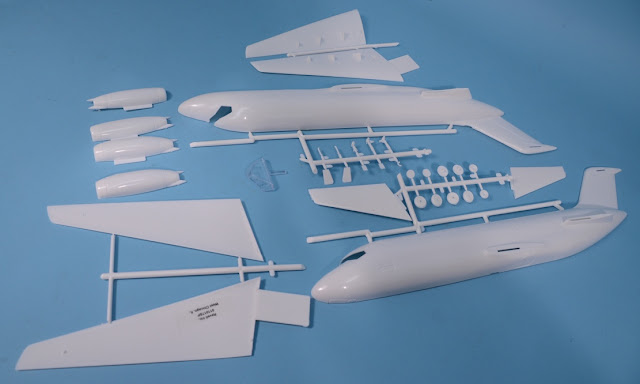 Actually, the first Aurora issues did have passenger cabin windows, though there were no transparencies included. When this Hughes Airwest version was considered, it had ‘silvered’ windows. I asked kit historian and past Aurora projects manager, Andy Yanchus, about this, and he said that if there was clear glass, it could have been chrome plated. But the glass didn’t exist, the only option being to put it on the decal sheet.

But then there was the problem that it would be applied over an opening - not good for decals, as they would easily tear when dry. So the only other option was to fill in the cabin windows, which was done. This also avoided some decal sheet problems where Andy was forever getting the decal supplier to match up the windows with the openings, and sometimes the sheets had to be reprinted several times because of a mismatch. The kit instructions this time around indicate that a silvered-decal sheet is provided, but this isn’t the case.

The decals include the TWA side slash, and both airline schemes include window ports printed in position. 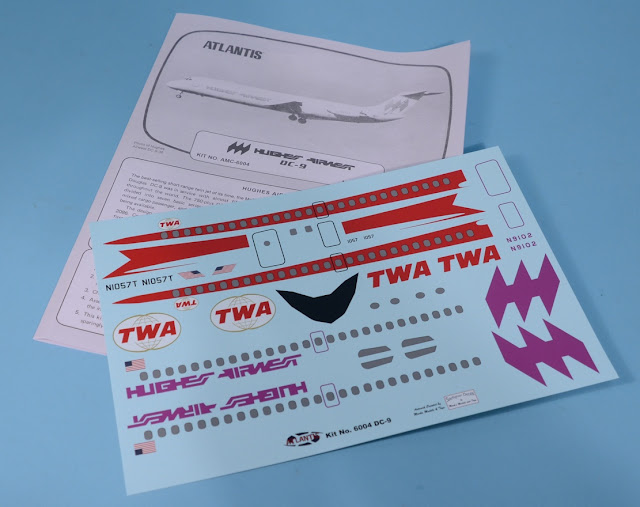 The undercarriage is designed to be assembled in the lowered position. But as there are no wheel wells, building the DC-9 with the landing gear retracted is a straightforward option. There is a slot  in the fuselage for the classic Aurora stand, though it isn’t provided with this issue - the tooling for this part has probably long gone. But these stands were all pretty much the same, so you could source one from another kit without too much difficulty. For a time, Moebius made a reproduction Aurora-style stand, though it might be too small for this DC-9.

An interesting thing about this kit is that it is to 1:72 scale. This is unusual for airliner kits of the period, and very unusual for Aurora, which generally made aircraft kits to any convenient 'fit the box' scale, even if the Aurora 737 was also in 1:72.

This remains the only injection-styrene DC-9 in this scale, albeit for the original short version, so should certainly fill a gap in some kit collections. In fact, there is only one other 1:72 scale DC-9 anyway, Welsh Models making a multi-material kit of the later, stretched DC-9-31.

Thanks to Atlantis Models for the sample kit