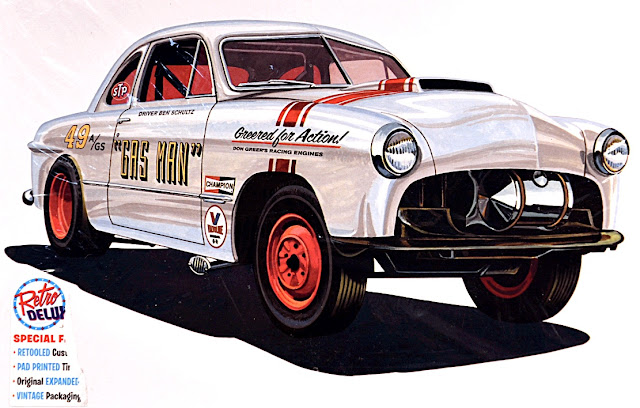 THIS RETRO DELUXE KIT IS A reissue of one of AMT’s very first Trophy Series kits, retaining the classic ‘three-in-one’ build options.

Mat Irvine: You can build the 1949 Ford Club Coupe ‘Gas Man’ in one of three ways - stock, competition, or custom. The kit hasn’t exactly been absent from various catalogues over the years, but this issue provides all the original optional parts, plus a few new ones.

So besides stock, representing the first year of manufacture, there is also a clean custom with a new grille, rolled pans (which cover the bumpers smoothly) front and rear, and custom bucket seats for the interior. A set of magnesium-alloy wheels is provided for this version if you wish. These wheels represent some of the new parts. 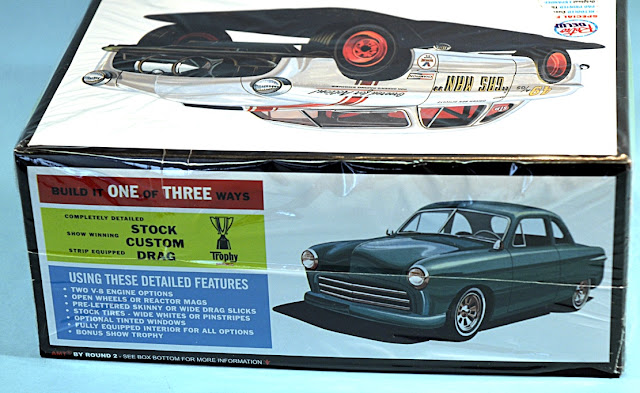 However, the emphasis with this Trophy Series kit is on competition, and the box-art is actually the one that used to appear on the side. The green custom was once on the top, but the two images have now been swapped.

For the competition model, you get an optional engine, in the form of a large-block Chevrolet V8 with a GMC blower, together with a hood scoop. A roll cage is supplied for the interior, and rear tyres are wide, drag slicks. You actually get eight new-tool tyres. Four are stock, with or without whitewalls. Two are modern front tyres, again with or without whitewalls. Then there are the two drag slicks. As with many of these reissues you also get two sets of transparencies. The Gas Man Ford Coupe has a standard set in clear, plus a set in transparent red.

Parts layout (below). New components in this kit are the mag wheels, red transparencies, and tyre options. Note the six tyres can be reversed if you don't want whitewalls on the outside. 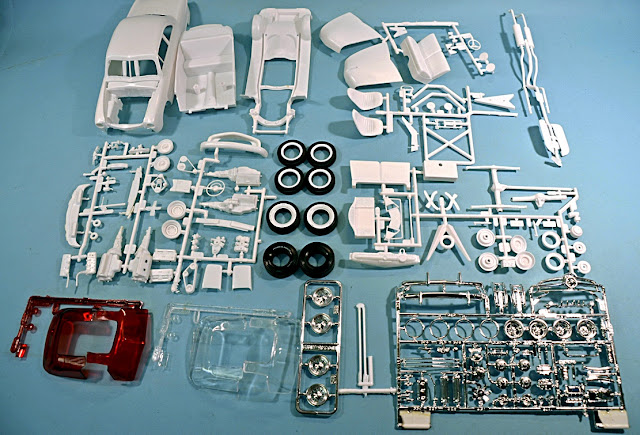 One main difference you got with the Trophy Series as against AMT’s ‘annual’ series, was a full chassis. In the Gas Man model, the chassis is perhaps not as detailed as with some modern kits, but it still features separate rear axles, springs, and exhaust system. One slight change is that the original kit’s metal axles have been replaced with plastic. They are not as strong, but they are adequate, and you can also retrofit them with thin steel rod if you wish.

The instructions (below left) are based on the original. The decals include some original markings, plus the current mini-box art that you get with many current AMT and MPC kits. 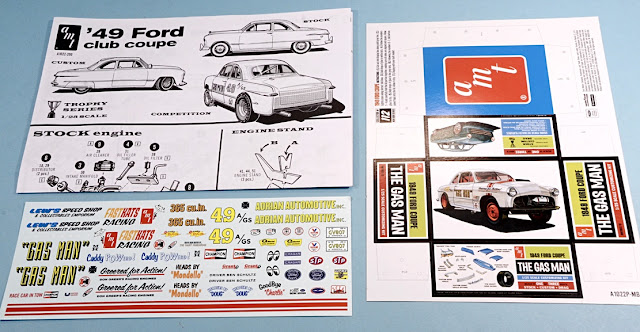 As with all Trophy Series kits, the trophy that gave the range its name is also included.

Thanks to Round 2 for the review kit.
Email ThisBlogThis!Share to TwitterShare to FacebookShare to Pinterest
Labels: Ford Club Coupe, Gas Man
Newer Post Older Post Home