MOONLANDER: SPACE EXPLORATION THE WAY IT MIGHT HAVE BEEN 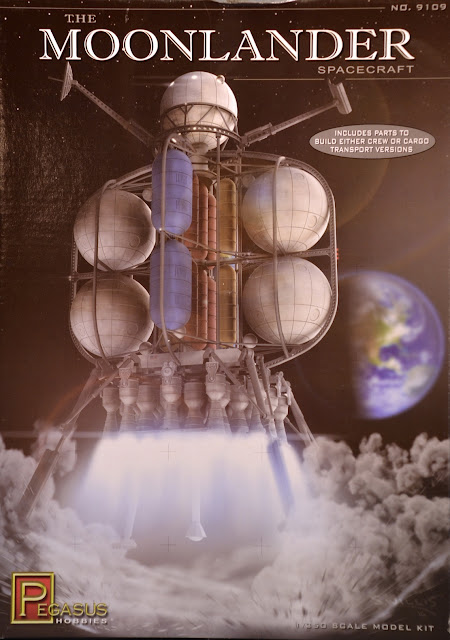 WITH THE LATEST PLANS OF ELON MUSK HITTING THE HEADLINES it seems a good moment to revisit what I have dubbed 'factual futuristic' spacecraft, designs that seemed a good idea at the time, but which were never built.


Mat Irvine: The 1950s were the most productive years for these designs, many appearing from American aerospace companies, and which were used in many books, magazines and the growing TV industry. Recently, model companies such as Round-2 and Glencoe have been reissuing contemporary kits from the likes of Lindberg and Strombecker, which were based on many of these designs.

This latest kit is from Pegasus Hobbies, and depicts one of a group of factual-futuristic spacecraft designs that originated with Wernher von Braun, the man who later became the brains behind the Apollo Moon landing program.

Note: The art on the box top (header) is certainly handsome - but it does include one error… Read on for the answer!

Parts layout (below) shows the multiple runners for many parts. 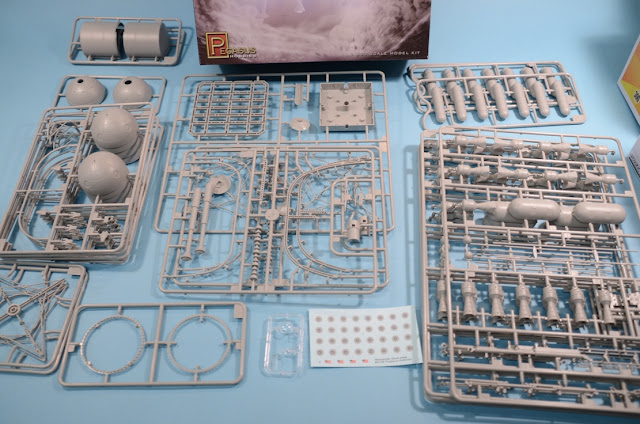 Best known at the time were articles that appeared in the weekly Collier’s Magazine, penned not only by von Braun, but also by Willy Ley and others. Many of these were illustrated by Chesley Bonestell, one of his best-known paintings depicting this giant Moonlander spacecraft.

The Moonlander was always going to be a complex kit, perhaps the reason why earlier manufacturers didn’t take a chance on it. But modern CAD-CAM and rapid-prototyping have probably made it, if not easier, at least more straightforward to create. As with many spacecraft designs, many of the parts are the same, here it is fuel tanks and engines, so there are multiples of runners, allowing four main tanks, four mid-sized and ten small tanks to be built up. Those, plus 28 main engines, in two sizes!

Because of this duplication, a thorough read of the instructions is vital. Even I (thinking I knew better - ha!) initially made a couple of errors in the construction, and had to retrace my steps...

I painted the smaller fuel tanks (below) using various methods to hold the parts. 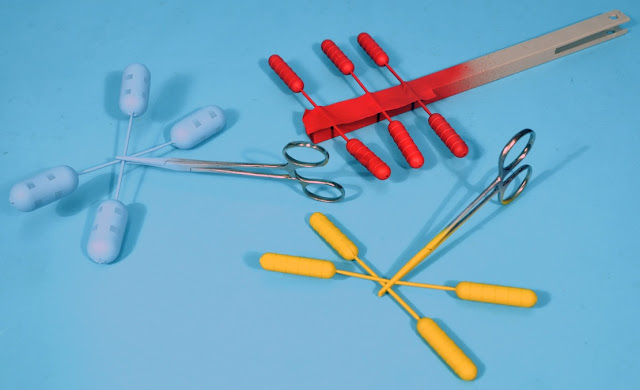 I painted the engine bells (below) silver. I finished the fuel pumps in bronze. 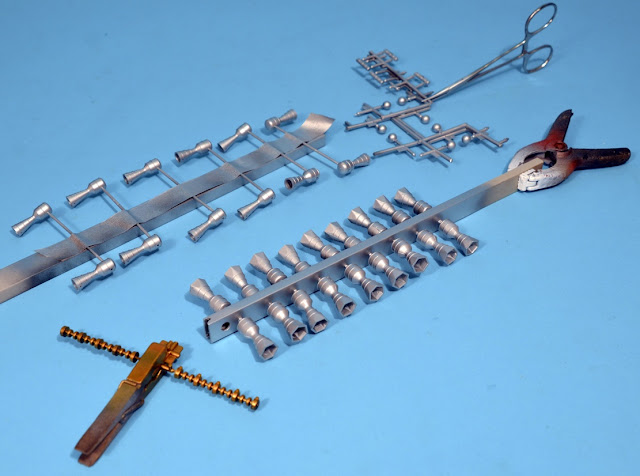 But if you do follow the instructions precisely, the Moonlander goes together in a very straightforward manner. And, given the complexity of the parts, the fit is excellent. The only slight problem I encountered was fitting the outer engines, which are intended to gimbal. To this end, each bank of three is connected by thin rods that snap into the lower edges of the engine bells. It’s debatable whether the ‘movement’ is really necessary, so I ended up by cementing them in place.

I painted the crew sphere (far right below) and the main fuel tanks in white. 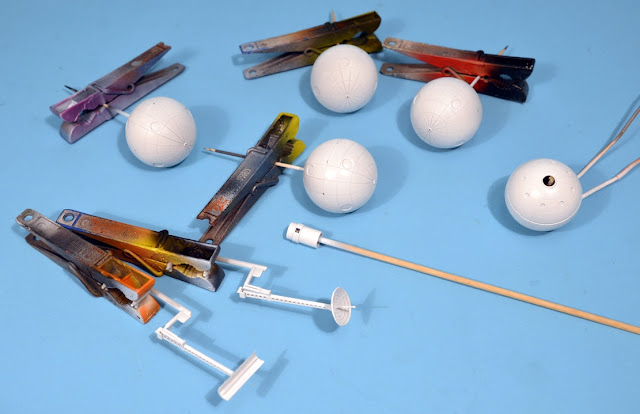 The main spacecraft structures (below) are finished in grey. 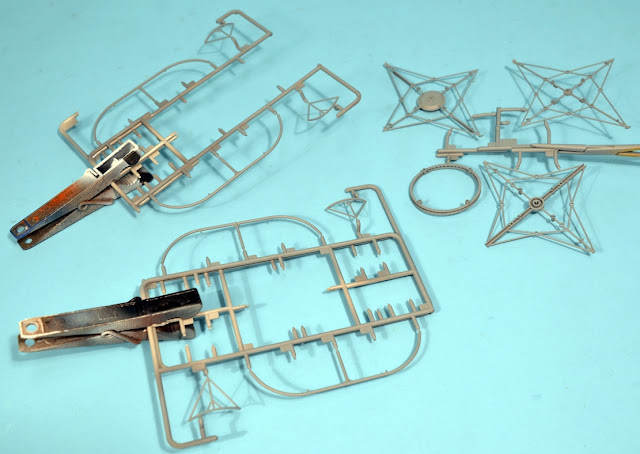 The original Bonestell painting showed the fuel tanks being white, blue, yellow and red, so I followed this scheme. The top crew module is white, the rest of the craft being white, grey or silver - so I used a mixture. Engines are primarily silver or aluminium, while I painted the main girder structure in grey. The antenna and solar generator on the ends of the booms are white.

The engine plate assembly (below). Note the small connecting rods for the 12 outer engine bells. The central landing leg is designed to be fitted early on to the engine plate, as it bears the whole weight of the model. But I found it better to fit the four stabilising legs first, then adjust the central leg, as it may be slightly too long. 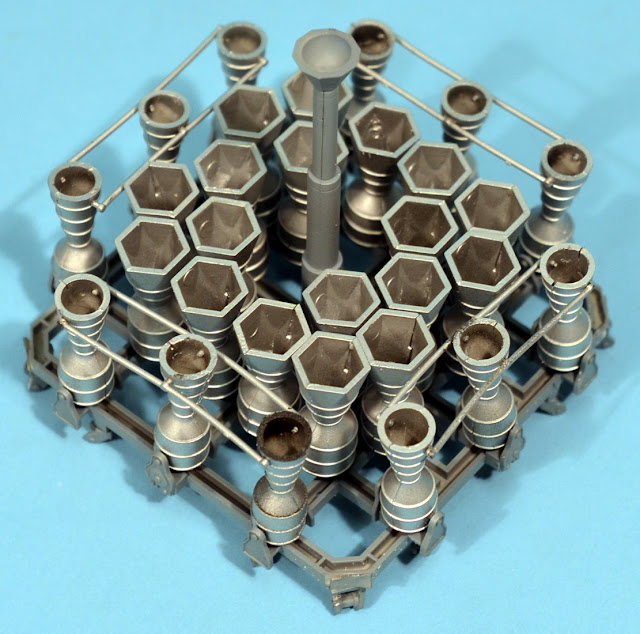 The Pegasus kit includes parts to make either of von Braun's versions, a crewed variant that could land and take off from the Moon, or one with a cargo section replacing the central fuel tanks. With this kit, you can choose whichever you wish, but you have to decide early on, as your choice dictates the main construction.

The fully assembled engine plate (below) with the four outer stabilising legs in position, plus the central load-bearing foot. 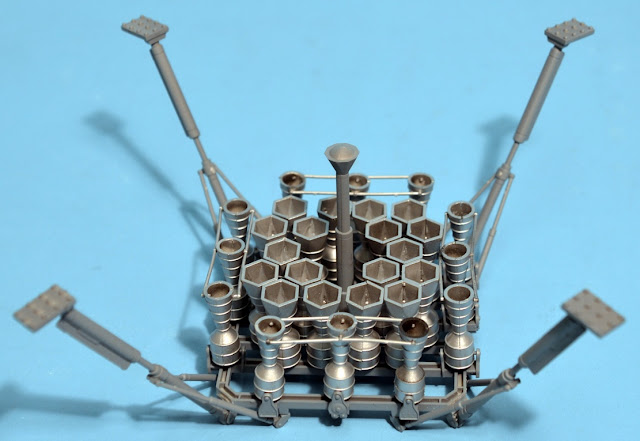 Completed main sections (below) show the level of detail that Pegasus has packed into the Moonlander kit. 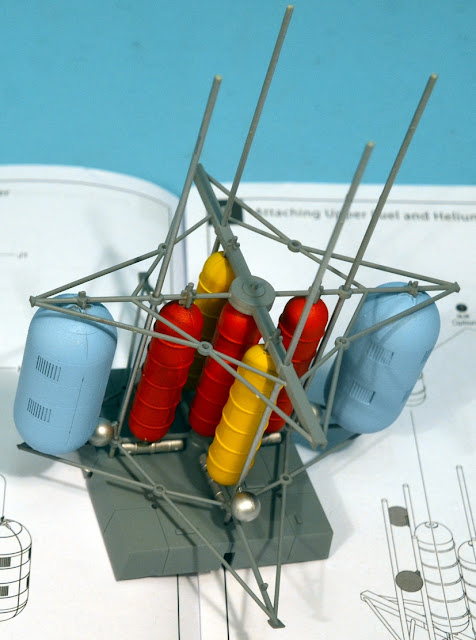 Main section (below left) assembled in crew-carrying mode, with central fuel tanks. At right is the alternative cargo section that replaces all ten red and yellow tanks. 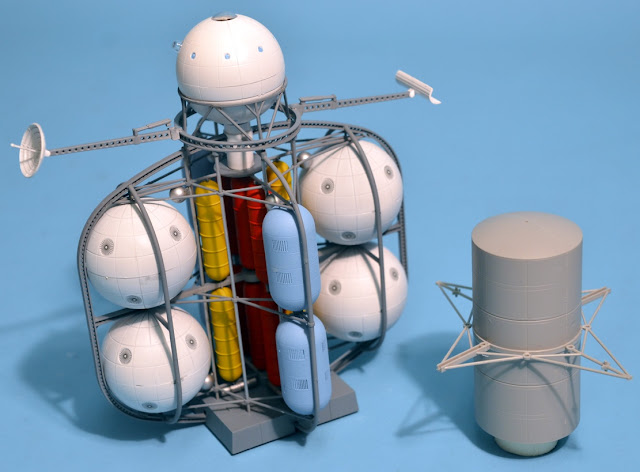 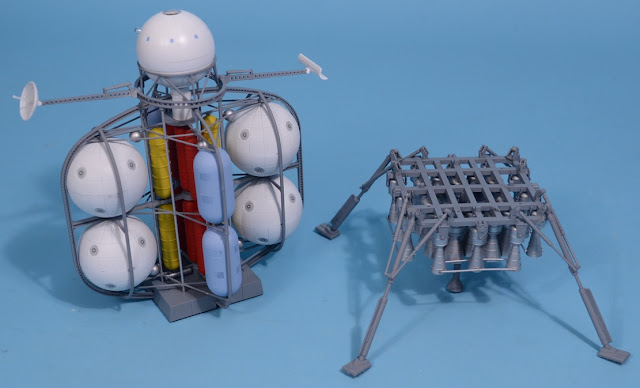 Assembling the lower fuel tanks, note the central one of the five smallest is red. So, for each layer there are two tanks in yellow, three in red. 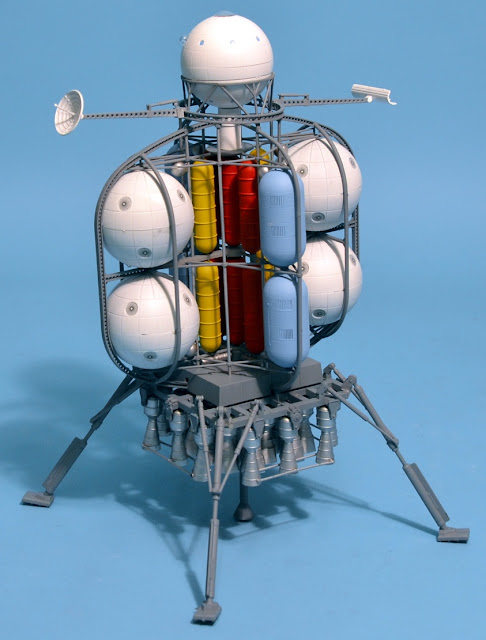 The cargo section (below right) against the illustration of this version on the box side panel. 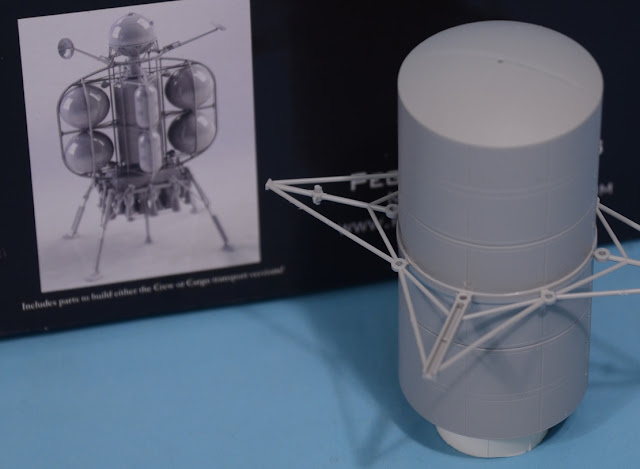 I created this diorama (below) to show the Moonlander in a suitable lunar setting. This was as envisaged in the early 1950s, when it was thought that lunar mountains would be far more jagged than proved to be the case. 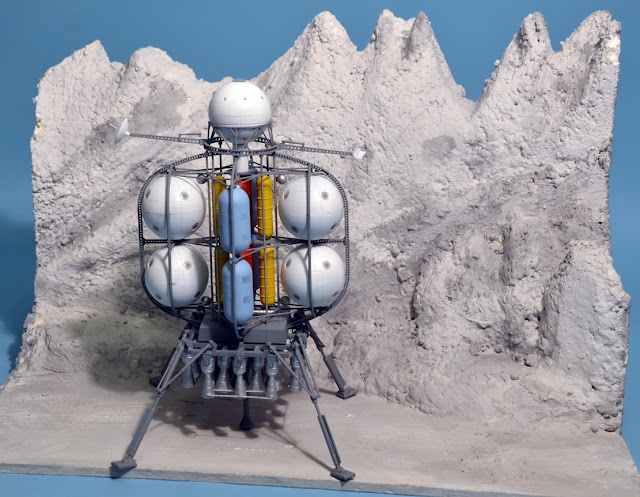 My completed Moonlander, against a Bonestell painting (below) in a book of the period. 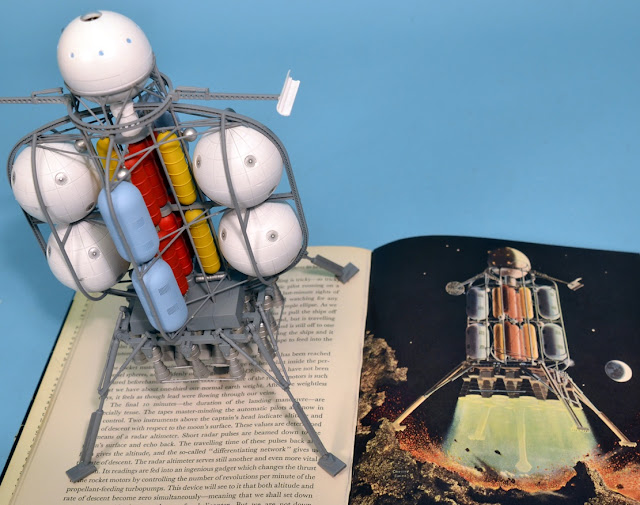 Bonestell published artwork (below) shows the Moonlander's cargo being unloaded 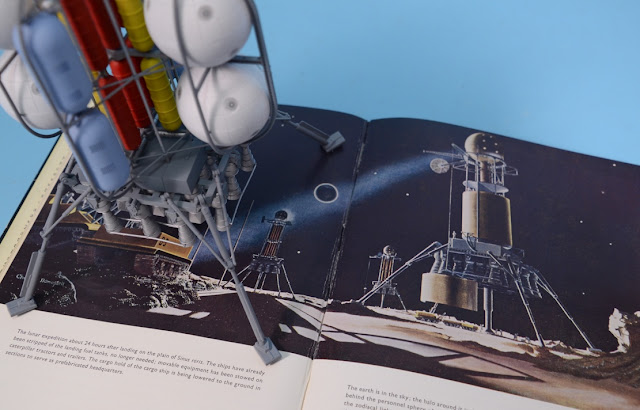 Summation
Overall, this is a very ambitious kit that looks truly excellent when assembled and painted. So congratulations go to Larry Thompson and his team at Pegasus.

Scale is another issue entirely. The box states 1:350, which is a scale Pegasus uses quite a lot, and of course is also a scale used by many sea-going (as against ‘space’) ships. But various sources quote the dimensions of the Moonlander reckon as being around 160 feet in height. The assembled model stands at around 10 inches, which works at to more or less 1:200 scale.

*And the error? Look at images 1 and 14. They show the ship landed on the Moon, but with the main white fuel tanks in place. These would actually have been jettisoned during the Earth-Moon journey. This scenario is shown correctly in the Bonestell painting.

Thanks to Larry Thompson at Pegasus for the review kit, and also to Pocketbond, the UK importer and distributor.