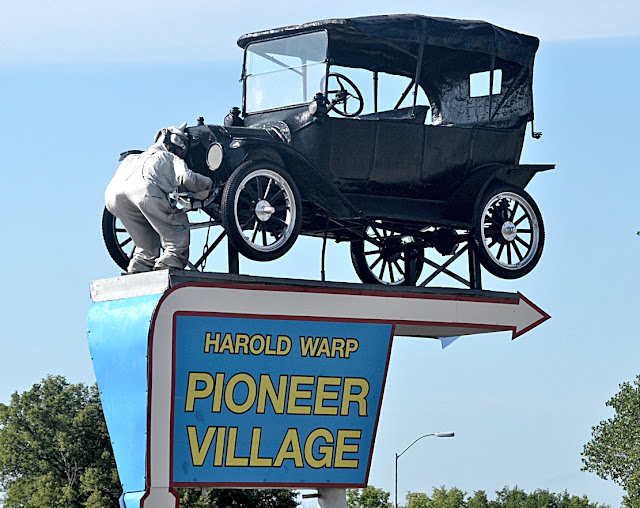 A WIDE RANGING MUSEUM OF AMERICANA in Nebraska has plenty of scale models on display.


Mat Irvine: I made a US visit in August 2017 to see the total solar eclipse, which tracked across much of the country. We settled on viewing the eclipse in Nebraska, as there was a chance of clear skies, and it was one of the few US states I’d not visited.

There was an additional reason in that the centreline of the eclipse path passed close to the small town of Minden, home to the Harold Warp Pioneer Village.

The Pioneer Village is located at the main crossroad and railroad line in Minden. It's announced with two full-size mockups, of a Conestoga wagon (below) and a Model T Ford (header). Both were pioneers of early American travel. 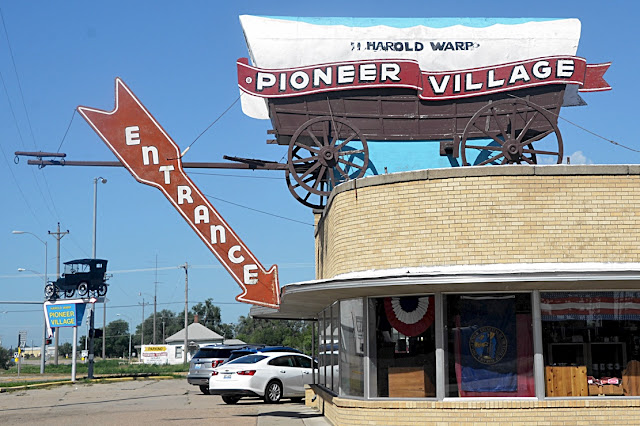 The Pioneer Village opened in 1953, and in its heyday welcomed thousands of visitors each year. There is still plenty to see, and there are three separate car displays, interesting in that the vehicles are mostly in original condition, complete with dents and scrapes. And there are plenty of scale models on view.

Just inside the main entrance, I found the first model display. This was full of classic cars, including the only AMT 1:12 scale car kit, a 1937 Cord (below). 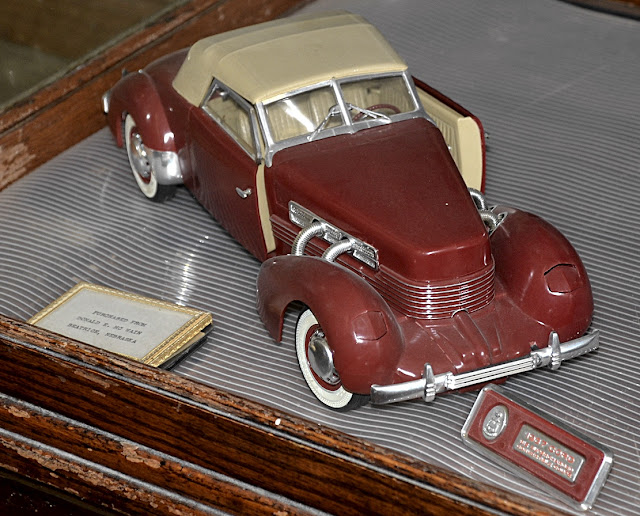 Harold Warp lived from 1903-94. He was the youngest of 12 children of Norwegian immigrants, and was born in Minden, hence the Pioneer Village’s location. He made his money by inventing a plastic window material called Flex-O-Glass.  This was developed in Chicago (from where coincidentally we had set off a few days earlier, to drive to Nebraska) and the Warp Bros company is still in operation, is still family-owned, and continues to make a wide variety of plastic products. 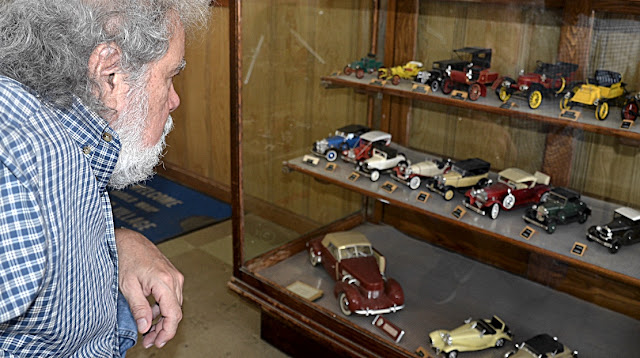 Meanwhile (below) I found an AMT Porter (left finger, second vehicle in) which modelled a star-car built for the 1965-66 TV series ‘My Mother the Car’ starring Jerry van Dyke (yep, Dick’s brother). 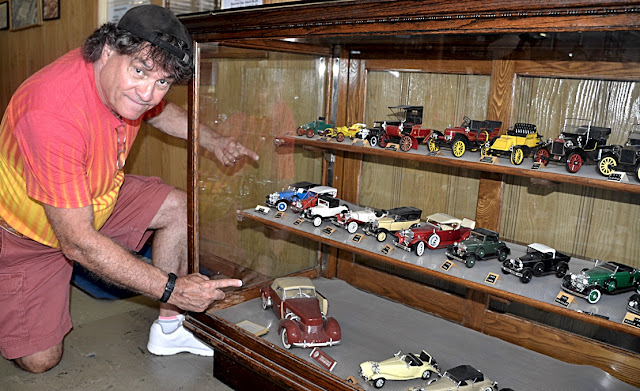 The AMT Cord was reflected by the 1:1 scale original (below) parked close-by. Interestingly, virtually all the cars in the Pioneer Village are in original condition, dirt and dents included. 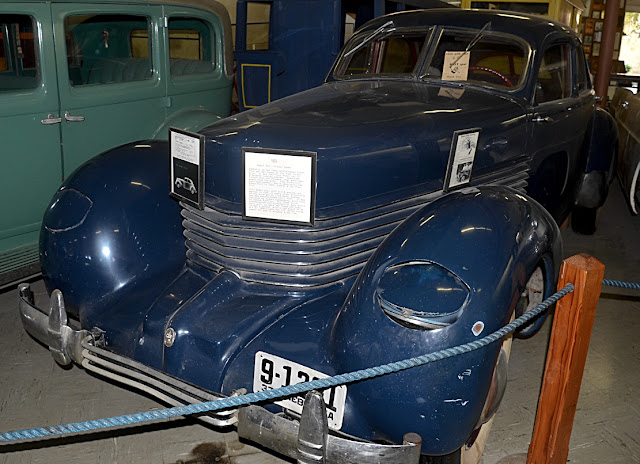 Harold Warp’s son, ‘Skip’, started building model from kits early on, and his creations (below) are in one of the displays. 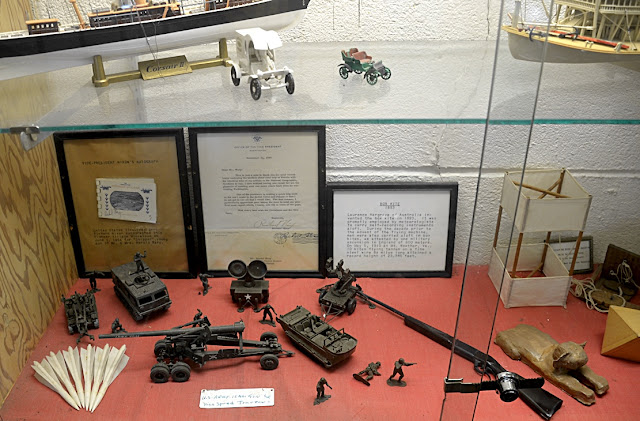 Skip's models include the Adams and Revell military items (above) and a Revell Bekins removal van set-up (below). This kit saw another use when converted to Honest John transporter duty.

Monogram Snark and Revell Skyrocket models (below). All are pretty basic builds, but Skip was only eight or nine at the time. 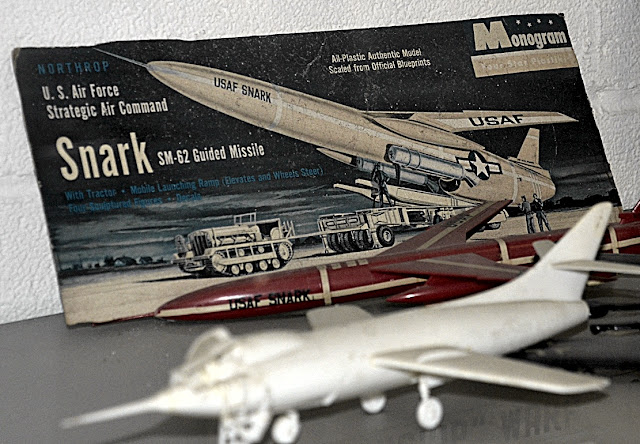 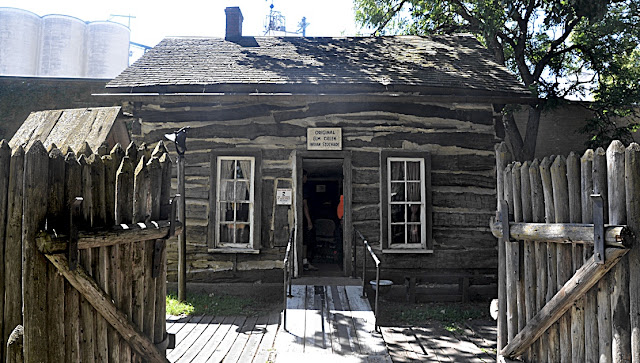 One of the outside exhibits proved to be an original Elm Creek Indian Stockade (above) which was dismantled at its original location, then moved to the Pioneer Village. The display includes a diorama (below) in a tiny upstairs room. 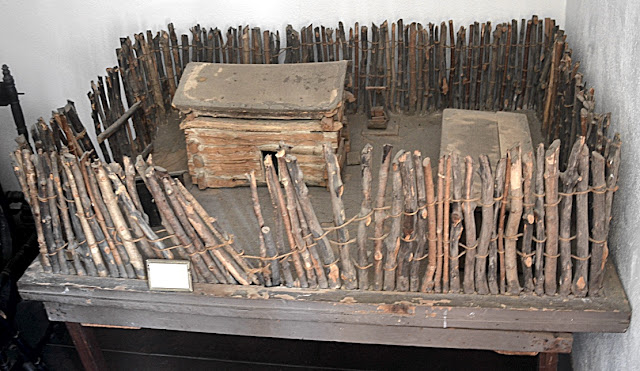 The Fire House (below) contained full-size fire appliances and a display of models. 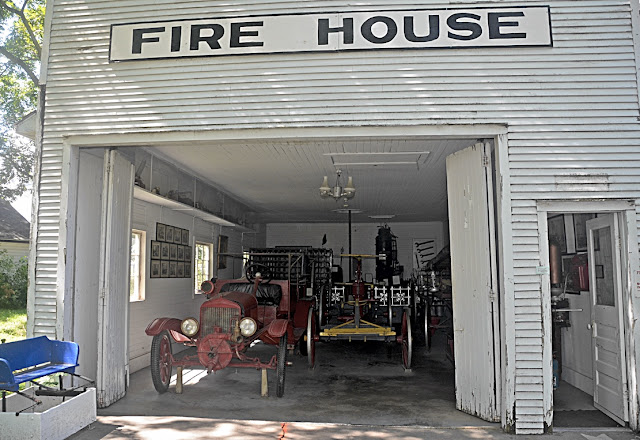 The Fire House models (below) were scratch-builts made by a Minden local, Iver Peterson, in 1954. 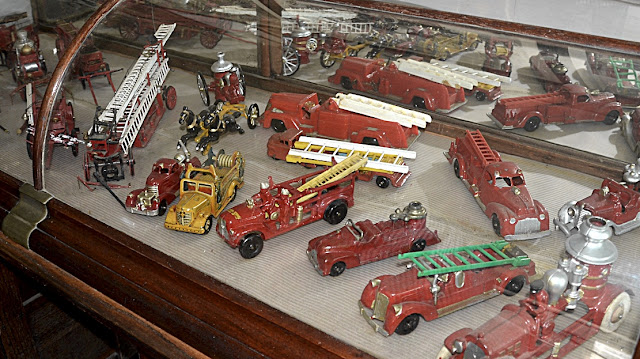 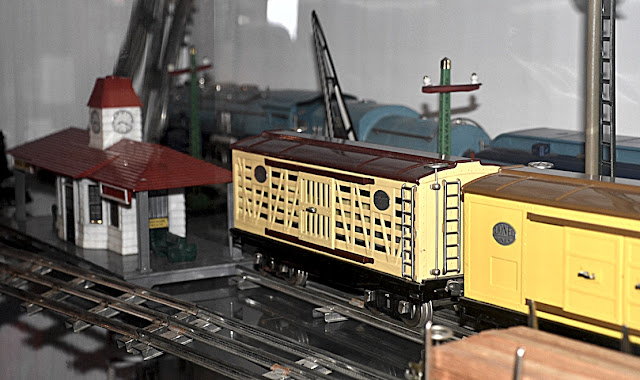 Handsome classic-era model railroads on display (above, below). 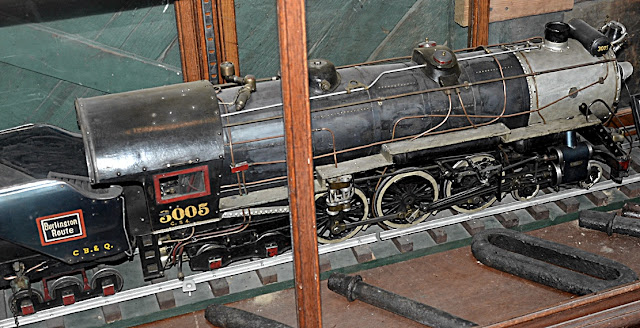 The Hobbies building (below)  actually contained primarily collectibles - I’ve never seen so many salt-and-pepper pots. The nearest to scale modelling here was a display of vehicles that included many original Revell Highway Pioneers models. 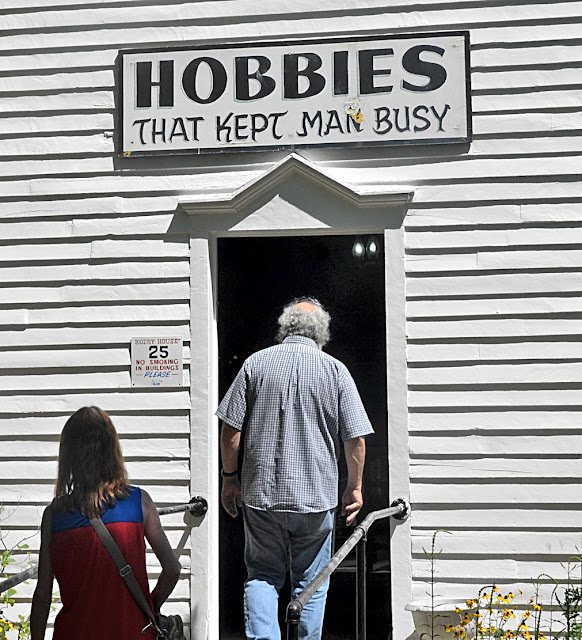 In the truck and pickups building (below) there was an actual Mack chain drive truck, which has also been made as a kit by Monogram. 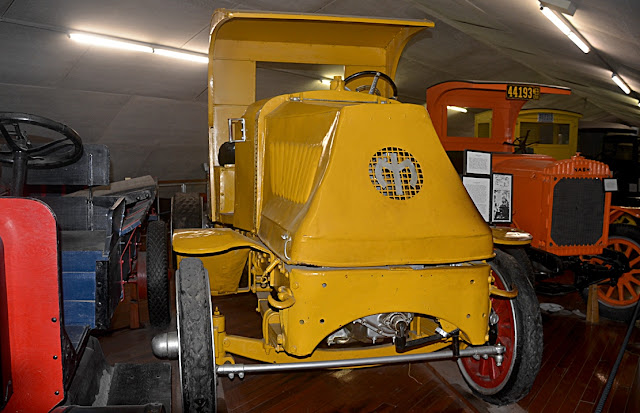 This case featured (below) a fine mixture, from agricultural machines to elegant cars such as a Jaguar XK120. In one of the three large car buildings, it was strange to come across this very British car (below) in the mid-west, an Austin A40. 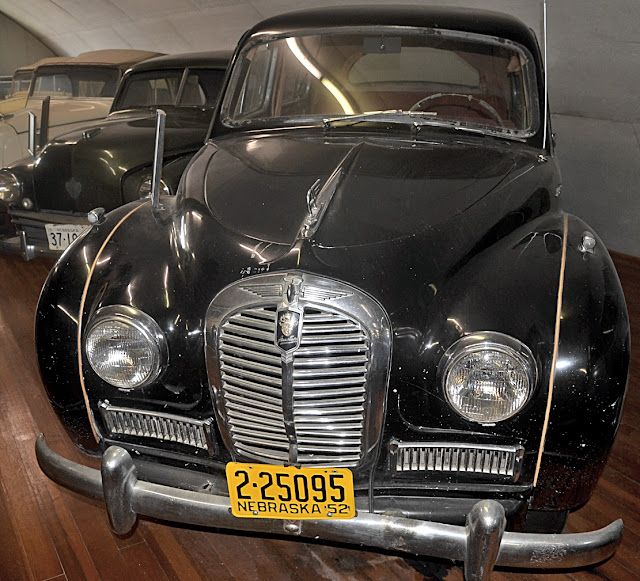 This area was also home to a display of rare AMT and Jo-Han promotionals (below) but they were awkwardly displayed, so I couldn’t really inspect them closely. But this dichotomy was just part of the overall charm of the Pioneer Village. 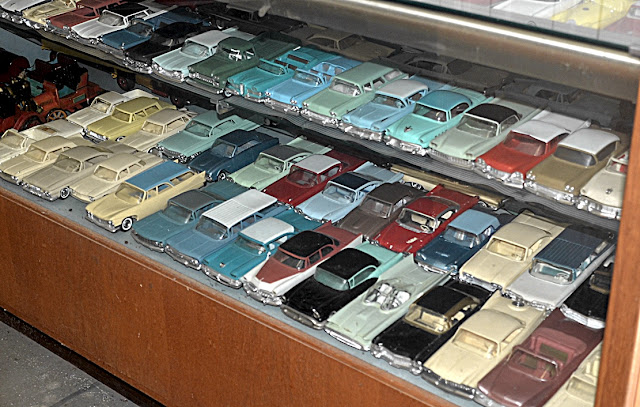 SMN note: The Pioneer Village sounds good for Americana fans like us. Here's what they say about Harold: “When 20 year old Harold Warp chugged his Model T into Chicago from the Nebraska farmlands in 1924 with a patent for Flex-O-Glass® and $800 in his pocket, his hope for the future lay in a special window material he had developed for his family's chicken coops, a desire for success and a willingness to work hard. A storefront factory/living quarters on Chicago's unpaved Cicero Avenue provided the start of Flex-O-Glass and Warp Bros. Today the firm has grown to fill three large plants and places the company among the leaders in the plastics industry.”

And here’s what the Pioneer Village has to say about itself: “You have to see it to believe it! The largest private collection of Americana anywhere... Awarded ‘Best Pioneer History Collection’ in 2013, 2014, 2015 and 2017!"