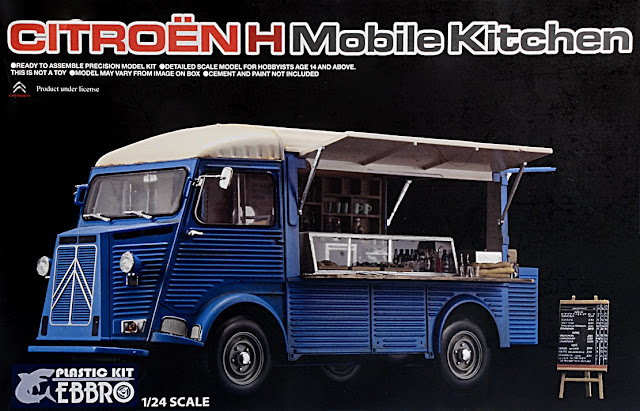 THE THIRD ISSUE OF THE EBBRO Citroen Type H Van has now arrived. This time, the 1:24 scale kit is fitted out in great detail as a mobile kitchen, or food van.


Mat Irvine: This Ebbro kit is similar to the previous Citroen Crepe Mobile, but it’s now been modified as the Mobile Kitchen. It’s the sort of vehicle that parks up at outdoor events or small villages - French or otherwise - where maybe there’s not a permanent venue.

Instruction leaflet (below), together with a trio of decal sheets. The 'Boulangerie' name tags the Type H as a bakery van. 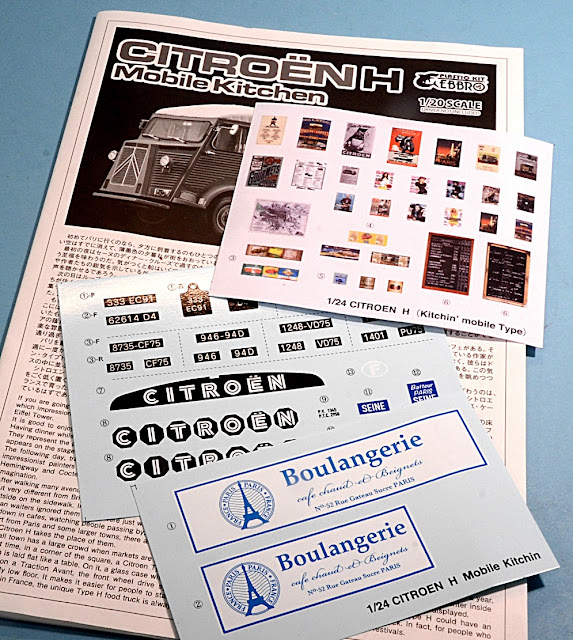 Building the Ebbro 1:24 scale Citroen Type H follows much the same lines as the previous kit. The big change is with the left-hand side of the van, which now has a fold-out hatch and counter, plus plenty of catering equipment and refreshments.

These form the bulk of the kit’s new parts, though precisely what you get and where they go, become a bit vague as you go through the instructions. However, the larger items are reasonably straightforward. There is set of shelves for the interior right-hand wall, plus a shelf to hold individual items such as a two-burner gas cooker, a microwave, and a coffee machine. A smaller shelf fits over the open rear doors.

Note (below) the line of mini-magazine jackets printed on the side panel of the box.

Parts layout (below) with original components at the back. The new runners for this kit are in the foreground. 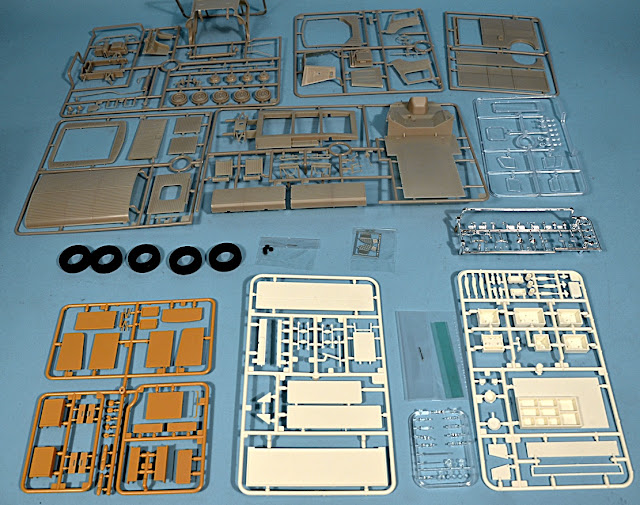 If you follow the box photo, the cab roof should be white. Having sprayed this, I masked off (below) then sprayed on a coat of Humbrol French Blue 14, which seemed appropriate. 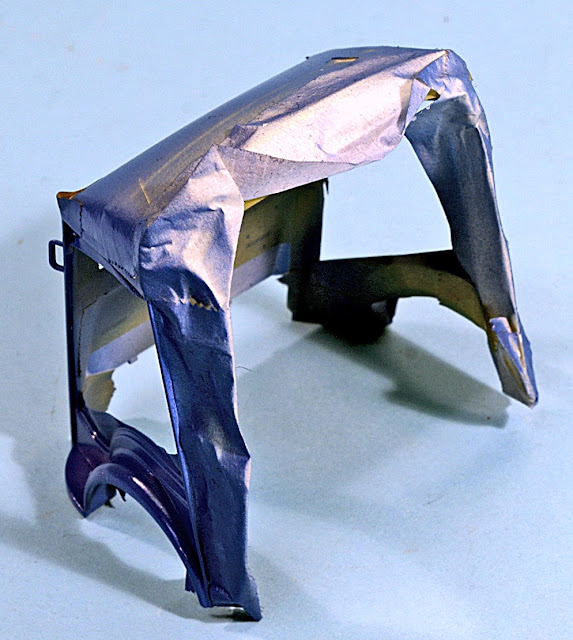 Main construction shown in a finished state (below). Changes to suggested colours include my choice of white wheels, and pale blue cab seats. I used an aluminium finish for the kitchen floor. 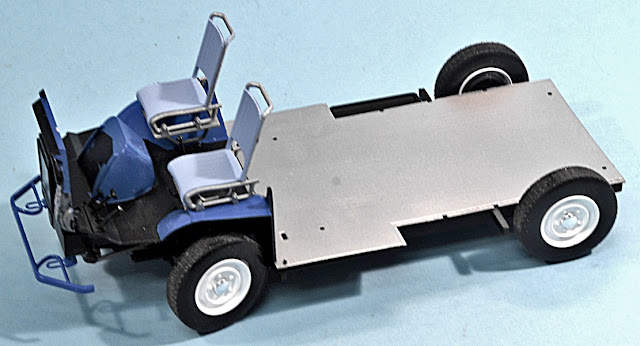 The van sides and rear doors in place (below). The nose is not fitted, though it is fully assembled and finished, with the lights and Citroen radiator logo applied. No engine is supplied with the kit. 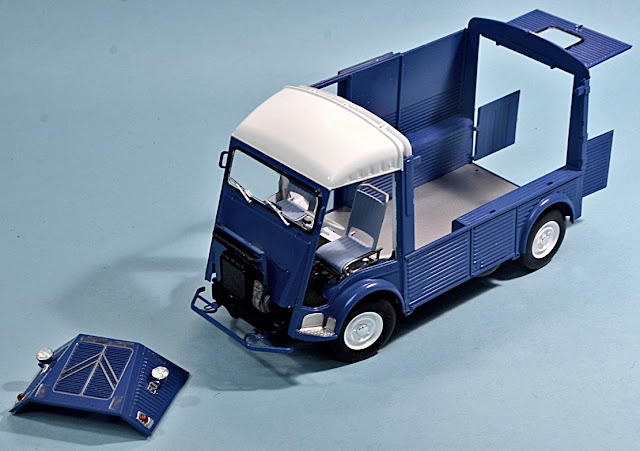 The main counter (below) has a long clear cabinet for the food, and there’s also a cash register. There are several trays and an easel, with today’s menu (in fact, two of them) printed on the decal sheet. Then there are many smaller items, such as a deep saucepan and frying pan for the gas rings, a number of cups and glasses, and a range of bottles. Three of these seem to be wine bottles, and have appropriate labels on the decal sheet. The others are more generic, perhaps depicting sauces or dressings.

Then there are two rows of three cans, plus three individual items, again all with labels on the decal sheet. There are two pairs of tongs, and wood-look bread boxes. Bread comes in baguette form and batons, plus croissants, pastries, and what appears to be a single doughnut (which means Homer Simpson is unlikely to stop by).

Ebbro doesn't seem to have forgotten anything with this kit. However, the box art is a bit misleading, as it appears that parts from more than one kit are used (so there’s more than one doughnut!). But what is supplied with this one kit is enough to fill the shelves, even if the instructions don’t really help: small components are all described as ‘option parts.’

Decals are supplied for magazines and posters, the latter of which could be applied to the insides of doors, and the interior in general. Don’t miss out the kit box, with its mini-magazine covers. These could be cut out, or you could scan and print them if you want to keep the box intact.

Note that the only way to properly show all the included equipment is to take the roof off (below). It can simply be dropped back into place afterwards. 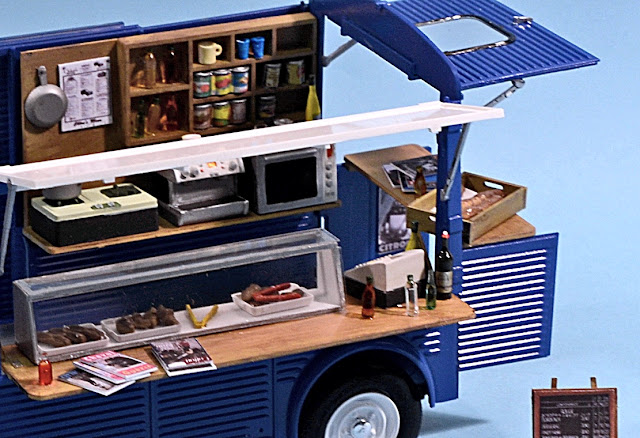 There is a minor mystery with the clear runner that has the bottles, for it also has two thin rods and what could be a small saucepan, but the purpose of these items not stated anywhere. Also not mentioned are the parts for another two shelf units. One is a three-shelf stand-alone item, another could be a wine bottle holder. However, they don’t quite fit anywhere, so I suspect that they may be included for a future release of the Citroen H-type. The possibilities with this van are endless, so that might be something to look forward to.

Top view (below) showing shelves, cans, cups and bottles in place. The bread trays at the rear now have a paper lining, made from tissue paper, cut to size. Magazines are scattered for customers to read with their coffee and croissants. 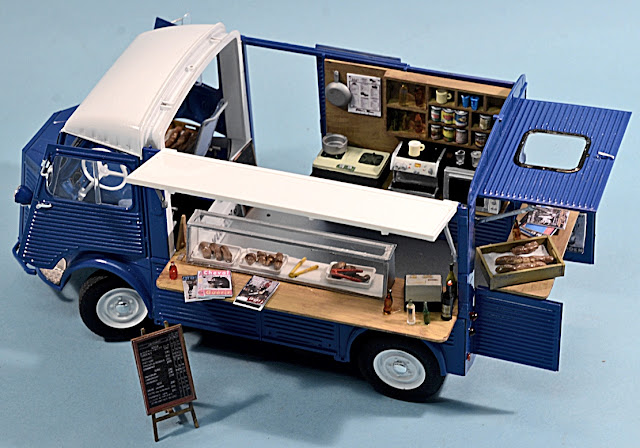 I used the same diorama setting (pictures below) that I had used used for my last build of an Ebbro H-type kit, the Crepe Mobile. The fountain is a 1:35 scale Italeri accessory, but the difference in scale doesn’t really matter. 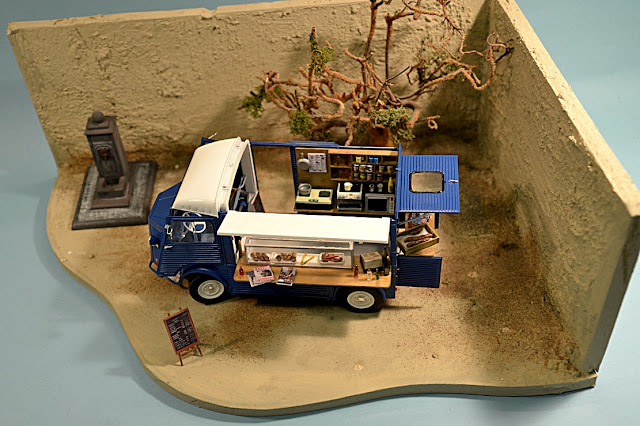 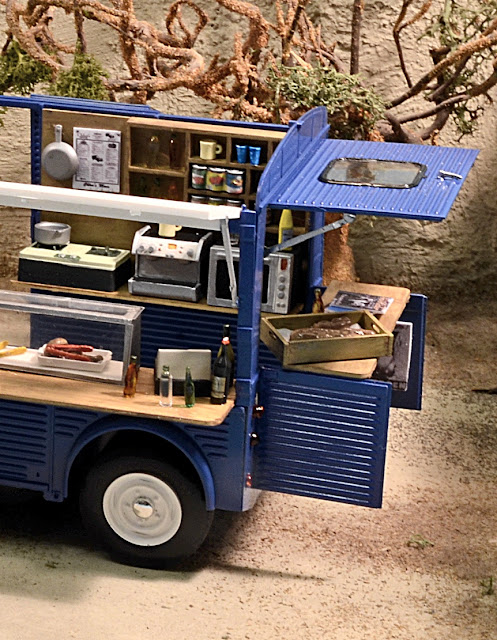 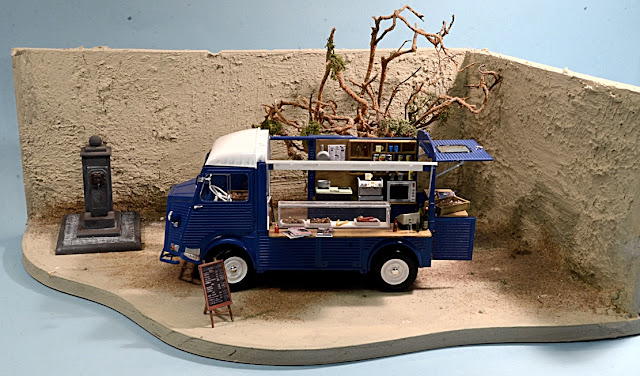 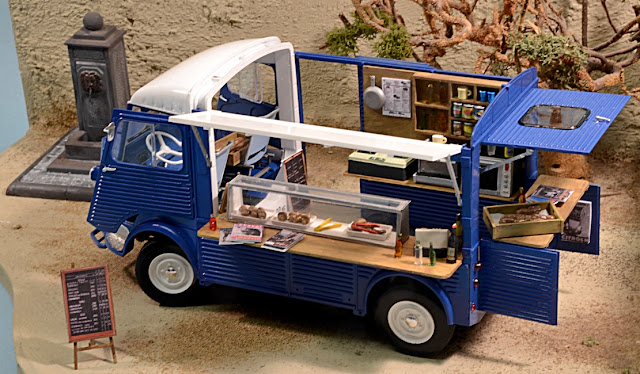 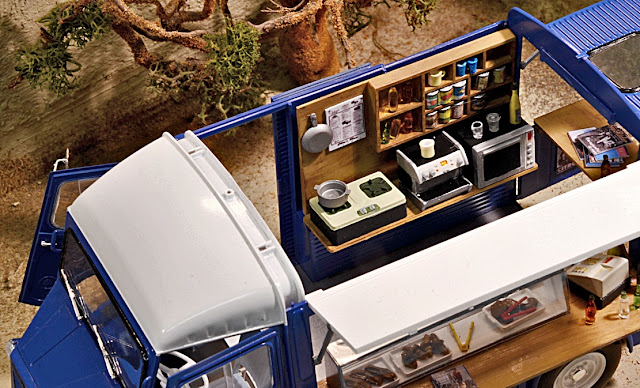 The Ebbro kit lacks figures, but I added the group (below) to liven up the scene. They are a mixture of people from Tyresmoke Productions, and the Tamiya Campus Friends set. 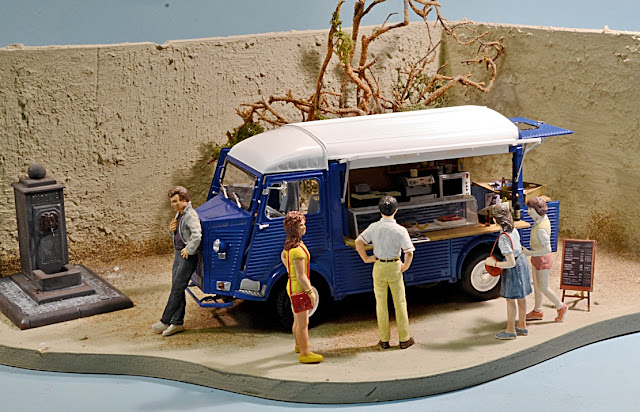 Summation
Despite the vagueness of some instructions, the Ebbro Citroen Type H is an excellent kit, and certainly one with a difference.

Thanks to The Hobby Company for the review kit.