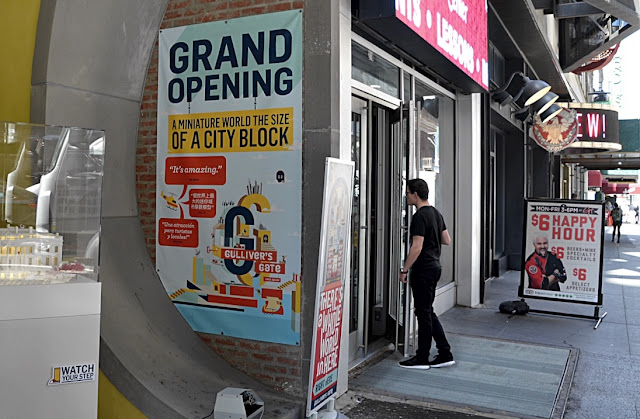 DURING A RECENT VISIT TO NEW YORK CITY, my friend Andy Yanchus and I visited a new Manhattan feature called Gulliver’s Gate. The somewhat enigmatic title covers a ‘world in miniature’ attraction, in a street just off Times Square.


Mat Irvine: Gulliver’s Gate opened in 2017, though the exterior signs are somewhat underplayed (header) as you could almost walk past without realising it’s there! But once inside and up the escalator to the first floor, you are greeted with what has to be the largest miniatures display anywhere. The Gate wasn’t finished when we went there, with Australasia, for example, being completely absent. But the USA, much of Europe, Russia, China, Israel, Egypt, India, and some of South America were represented.

New York City (below) in all its miniature glory. 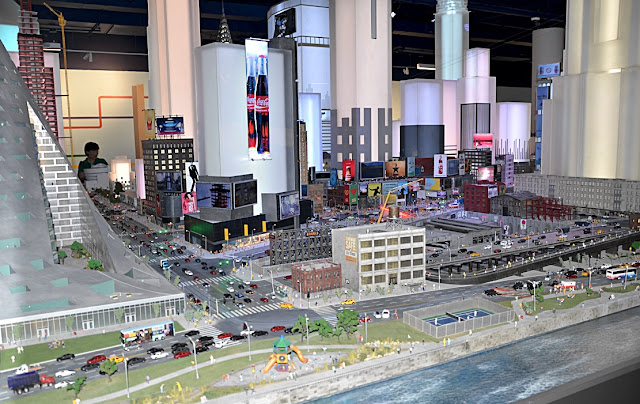 Tower Bridge and Buckingham Palace (below) with a concert playing in Hyde Park. Actual concerts play on the Gulliver's Gate audio system, the one playing when I took the photo featured music by the English singer-songwriter, Adele. 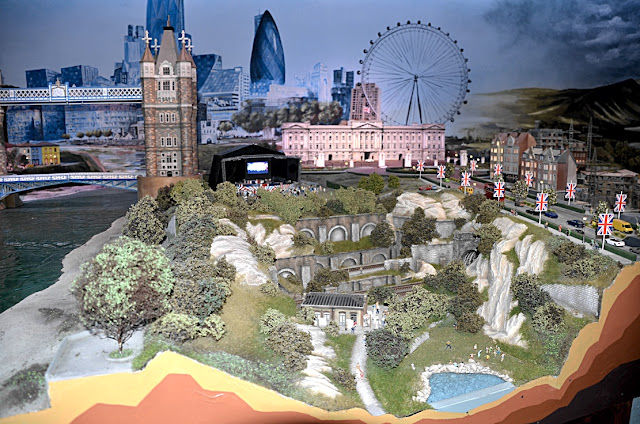 The biggest surprise for me came about halfway round our tour. There, signs invite visitors to meet the model makers behind the exhibits. Andy and I stopped by a workshop counter, where a 3D printer was making some Doctor Who Tardis Police Box models.

Tower Bridge, River Thames and the Houses of Parliament (below). At bottom far left you can see the somewhat sunken Greenwich Observatory. Also note the Beatles Yellow Submarine. The displays are full of such details. 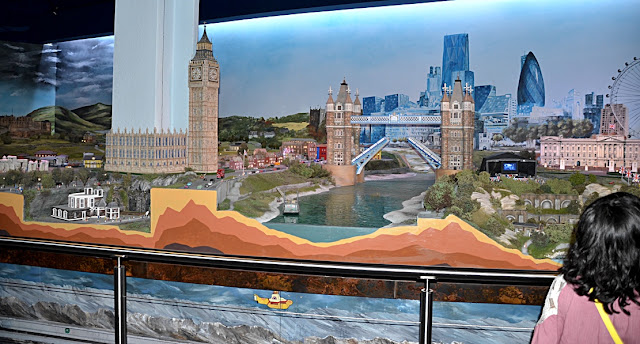 Andy and I introduced ourselves: “Hi, this is Andy Yanchus; he used to be with Aurora, and I was with the BBC Visual Effects Department…” At which point our host said, “Ah, hang on...” disappeared for a few moments, returning with a tall guy, who exclaimed, “Good heavens - it’s Mat Irvine!” He turned out to be a British modeller called Adrian Davies, now head of model making at Gulliver’s Gate. As I said, “It’s - literally - a small world.”

Beatles crossing Abbey Road in London (below). It's the Gulliver's Gate take on the photo taken for the cover of the classic vinyl album Abbey Road, first released in 1969. 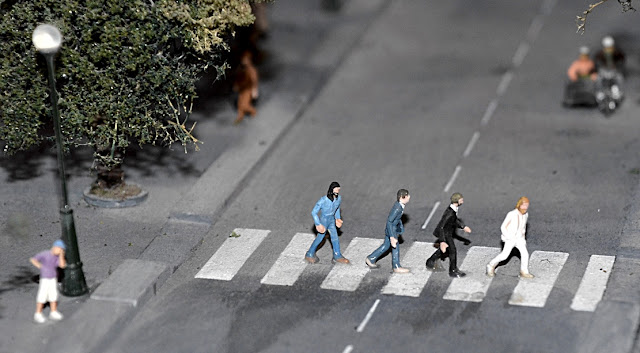 Adrian explained that Gulliver’s Gate was indeed very new, therefore being worked on, with new countries being added regularly. The models have been built by companies around the world, even if the UK and Irish exhibits were made in Italy. This might account for why the Greenwich Observatory model is depicted in a hollow, despite the original standing high on a hill overlooking southeast London.

Here I am (below) pointing to a miniature Tardis that stands by the model Stonehenge. 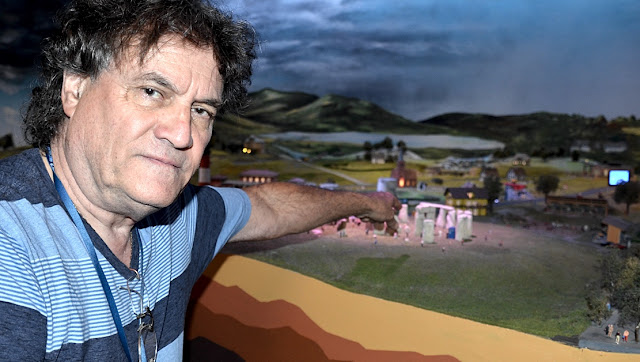 But Gulliver’s Gate generally looks real enough. Buckingham Palace, Tower Bridge, the four Beatles crossing Abbey Road all look authentic. And there’s a spot of humour too: the ancient circle of Stonehenge is there, complete with a Tardis model standing nearby. Obviously, a BBC crew is making an episode of Doctor Who! 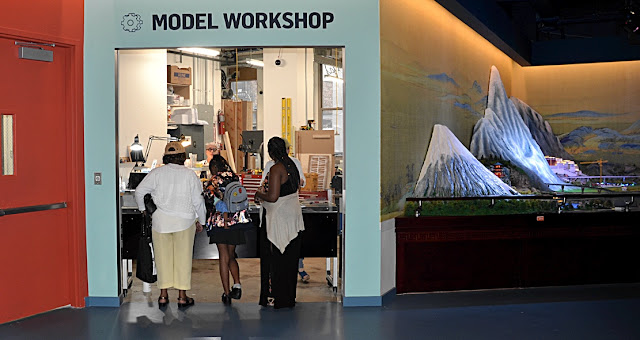 From left (below) Andy Yanchus, Mat Irvine, and Adrian Davies. Andy is examining a 1:87 scale airliner being 3D printed for the Gulliver’s Gate airport. 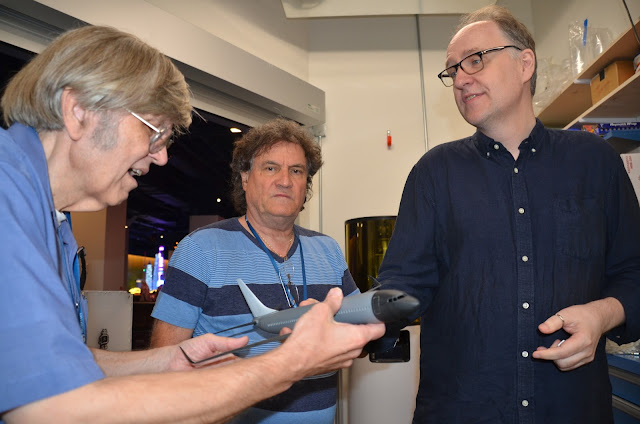 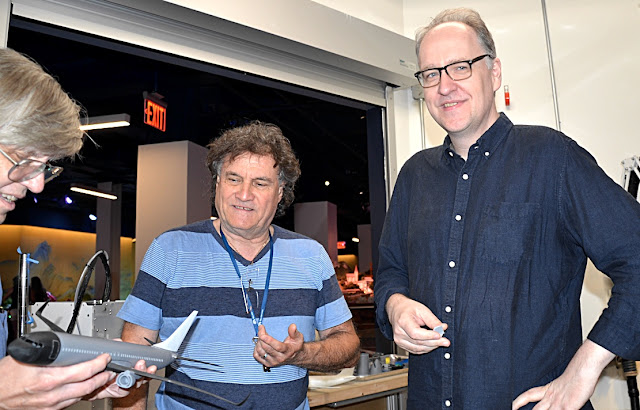 The pix here are just a taste of what to expect at Gulliver’s Gate. If you are in NYC, it’s well worth a visit, though make sure you buy tickets online beforehand, as you will save five bucks.