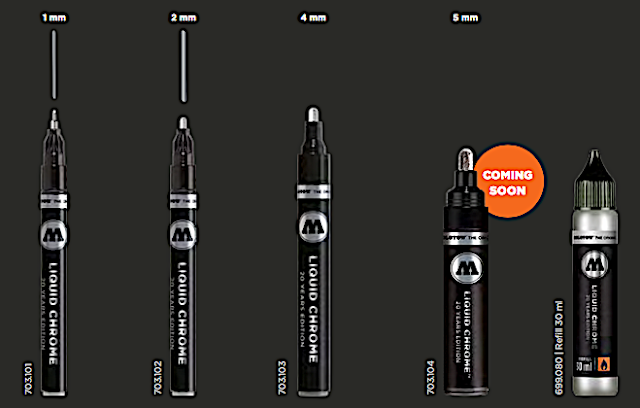 ONE BIG PROBLEM car modellers had back in the ‘good old days’ was chrome - or lack of it. For there was no method to properly mimic the chrome embellishments on glass surrounds, emblems, door handles and the like. Well, now there are solutions.


Mat Irvine: First, Bare-Metal Foil came along and that solved most modelling issues. But it still leaves untouched those very small chrome parts, such as vehicle names spelled out at front and rear. Sometimes they are supplied as decals, but not always, and even with a steady hand, a very small brush and a bottle of silver paint, chroming doesn't always work.

But now I have found a solution: Molotow Liquid Chrome (MLC) pump marker pens. They are really graphic artist supplies, but have been adopted by many model makers, especially auto modellers. When I was handed a sample MLC by colleague Paul Fitzmaurice of Modelling Tools, I was slightly sceptical. First, would it really give a true chrome finish, and second, would it deal with tiny lettering. I’m pleased to say that the answer to both questions was a definite “Yep!”

MLC pump marker pen (below). This is the 2 mm size, of several available.

I had an example on which I could try out the MLC recently, where I was initially stumped as to how to chrome the FORD letters (below) on the front of a Revell 1957 Ranchero kit. I’m pleased to say that (using an ultra-steady hand) I could pick out those tiny letters accurately. About the Revell Ford Ranchero
There is a story behind the kit that I was building. Some time ago my old friend Andy Yanchus (once Project Manager at Aurora) gave me a pile of unbuilt Revell and AMT car kits on the reasoning that he would never get around to building them, and that I was ‘The Car Guy.’

Until recently, I’d never got around to building them either, but when I made a return visit to see New York and Andy, he asked, “You built any of those cars kits yet?” I had to answer “Not yet” but on my return home, I thought “Why not?” And as the Revell Ranchero was a kit I had never built, I started with that. 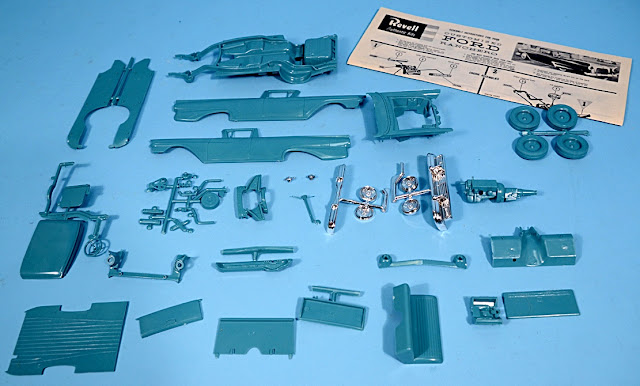 These vehicles were a new idea in the US, but actually echoed what the Australians had been doing for years, converting a standard saloon car into a pickup, to create the ‘ute’ (utility vehicle) in the process. Chevrolet responded with the El Camino, but other pickups, such as the Chevy Silverado, Ford F-150, and Dodge Ram are based on trucks.

The original issue (below) which featured a nice piece of retro-style box art. The custom options were limited to a few extra parts, or you could build the Ranchero in stock form.

Even so, the body of each of these three could be pre-assembled as a single module, which is what I did with the Ranchero. And when it came down to those tiny FORD letters just in front of the hood, I thought of the Molotow Liquid Chrome pen - and it certainly worked.

Later, the Ranchero kit received a chopped top (below) and was issued as a custom in the 1970s. To get the stock height back, the tooling would need a major conversion, back to the orginal design. 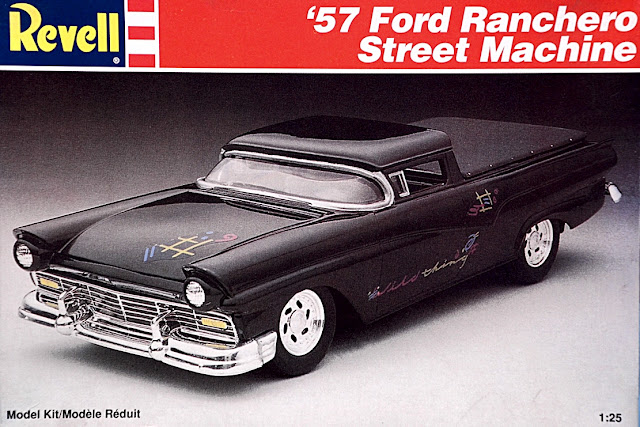 Thanks to Andy Yanchus for the kit, and Paul Fitzmaurice for the MLC marker pen.