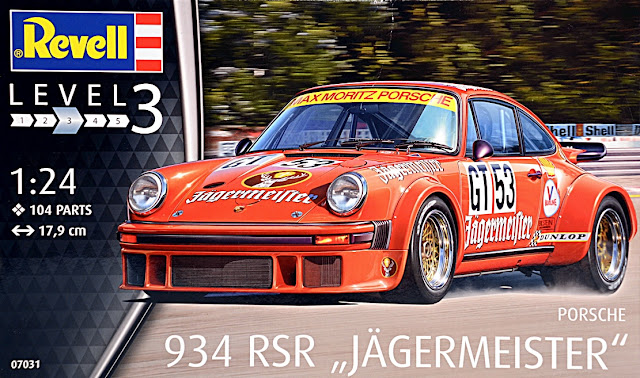 THIS IS A NEW 1:24 SCALE REVELL GERMANY kit depicting a Porsche 934 RSR in the orange markings of Jagermeister, a German drinks distiller.

Mat Irvine: The Revell Porsche 934 RSR is moulded in orange, black, silver and clear. It’s fully detailed, with the classic Porsche engine at the rear, and a full racing interior. Bottom of the biggish box (below) has useful reference photos. 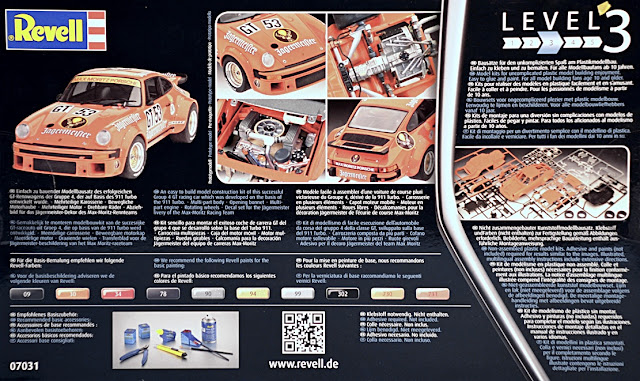 Components (below) are moulded in nine groups, plus body and black vinyl tyres. 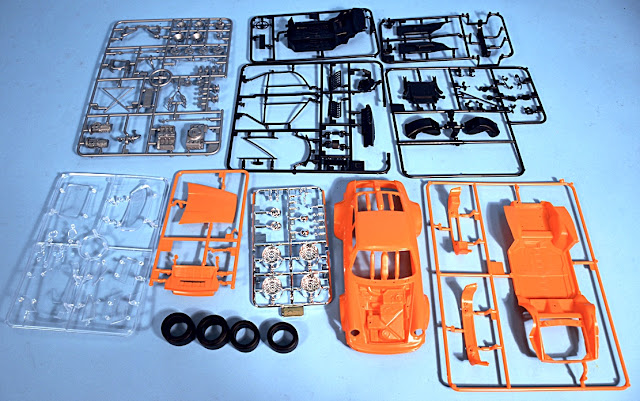 The instruction booklet (pictures below) is in the Revell new style, printed in full colour with plenty of information to make assembly straightforward. Decals include the logos of the sponsor company, plus details such as seat belts. 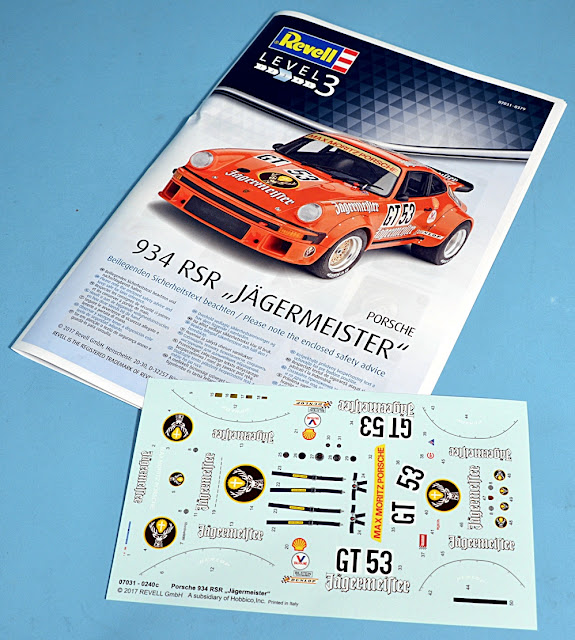 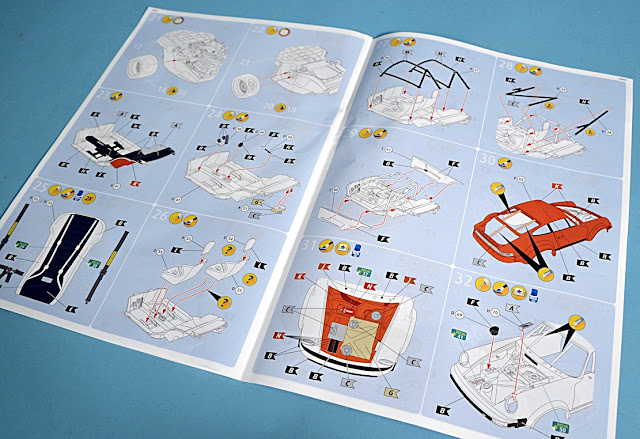 The front (below) and rear bumper trims should be painted in satin black. The thin bumper bar across the front will be easier to paint if you use masking tape to keep the line straight. 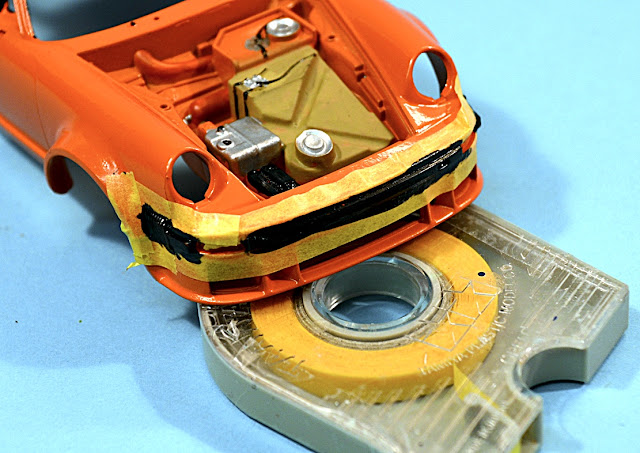 The front compartment (below) has the fuel tank, battery, and fire extinguisher built into a single component. Only the intake funnel, fuse box, and brace are separate parts. Opening up the access hole next to the Jagermeister logo is optional. 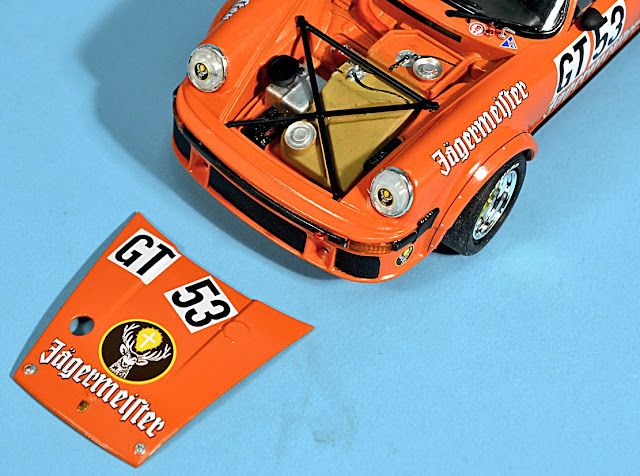 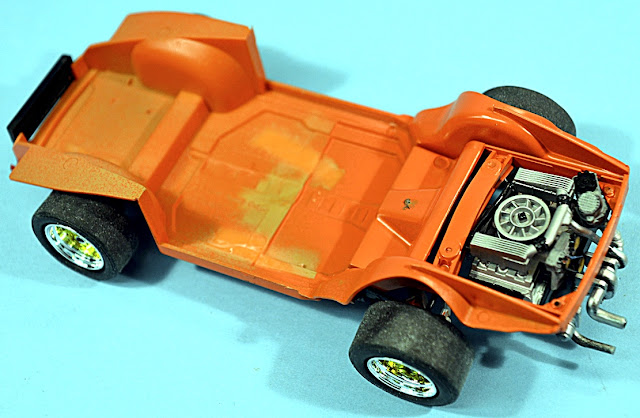 The Porsche’s interior (black module below) has two seats, with optional head-rests. There are separate foot pedals, a gear shift and handbrake, plus a full roll cage. Decals are included for the instrument dials and seat belts. 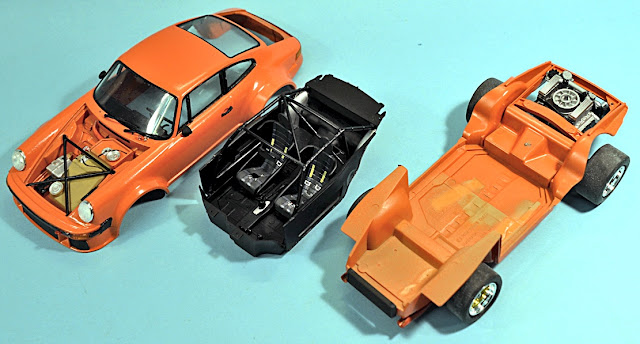 The engine cover opens, but most of the engine (below) can be viewed only from underneath. 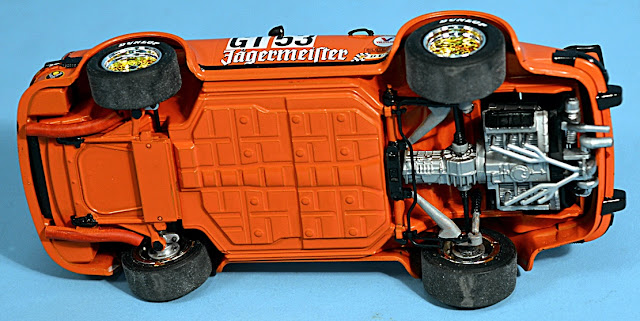 I created this section of diorama track (below) from an item originally sourced from the long-defunct Tyresmoke Productions. I matched the Jagermeister team colour to Testors Competition Orange. 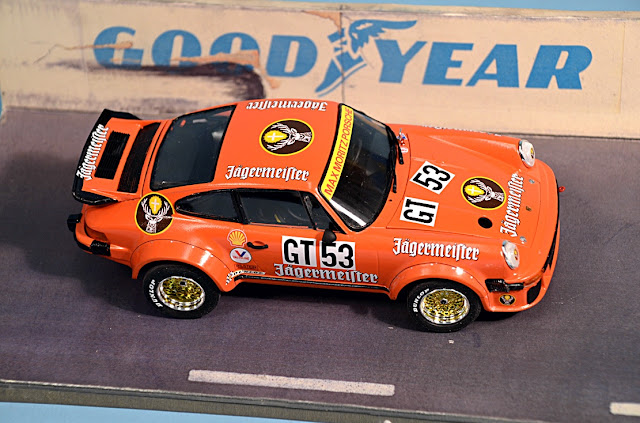 The wide wheel arches are built into the kit bodywork, though the real car uses fasteners to for this. The decal sheet includes printed fasteners (below) for the purpose. There are also separate Dunlop decals for the tyres. Each wheel’s interior section needs to be tinted in gold, and transparent yellow works well for this. 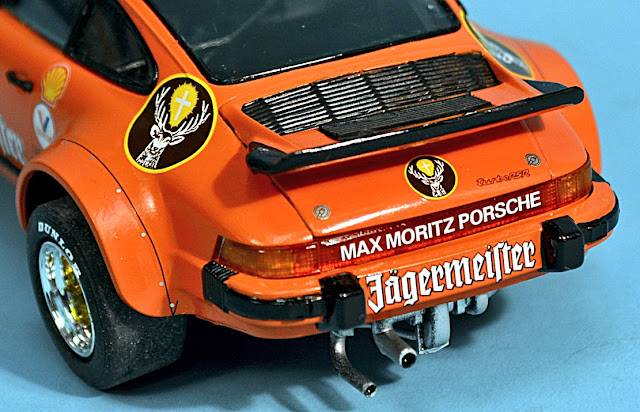 The attractive colour scheme has made the Jagermeister brand popular with model companies. Tamiya has also licensed the name (1:24 scale BMW shown below left) and this new Revell Porsche 934 RSR will look good next to other racing models. 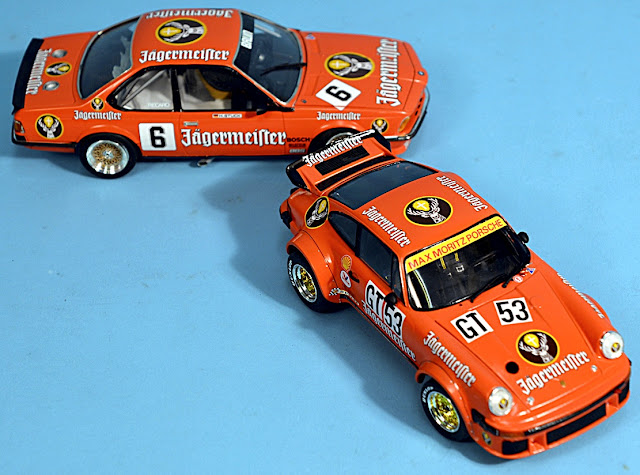 * SMN note: For those of you who are unfamiliar with Jagermeister, Wikipedia tells us that it is “…a type of liqueur called Kräuterlikör (herbal liqueur).”

The ingredients include “…56 herbs, fruits, roots, and spices, including citrus peel, licorice, anise, poppy seeds, saffron, ginger, juniper berries, and ginseng. These are ground, then steeped in water and alcohol for 2-3 days. Afterwards, this mixture is filtered and stored in oak barrels for about a year. When a year has passed, the liqueur is filtered again, then mixed with sugar, caramel, and alcohol.”

Jagermeister is best kept on ice and served cold - and (despite rumours) it does not contain blood from deer or elk.

Blimey, no good for Count Dracula’s festive tipple then.