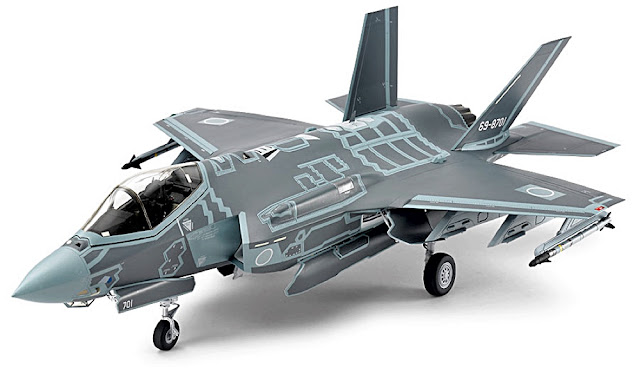 EAST MEETS WEST with this collaboration between Tamiya of Japan and Italeri of Italy.


SMN report: Tamiya has taken the excellent 1:32 scale Italeri Lockheed Martin F-35A kit, and used it as the basis for a Limited Edition of the aircraft in Japanese military markings.

As with most modern military aircraft, this F-35A has a monotone marking scheme, consisting of plain grey with a lighter grey-blue for the radome and assorted panels. Note that even the normally blood-red Japanese rising sun roundel has been reduced to a pale circle. The F-35A has them on the wings, and beside the air intakes on each side of the fuselage.

The finished model is on the big side, measuring nearly a half-metre long, 19 inches to lovers of Imperial measurements. That's large enough, we reckon, to merit a diorama, even a minimal one. Perhaps a section of tarmac and a figure or two would do the job, if only to give a sense of scale. However, with or without a diorama, this F-35A will look the biz when displayed.

According to Tamiya, the kit includes these features: