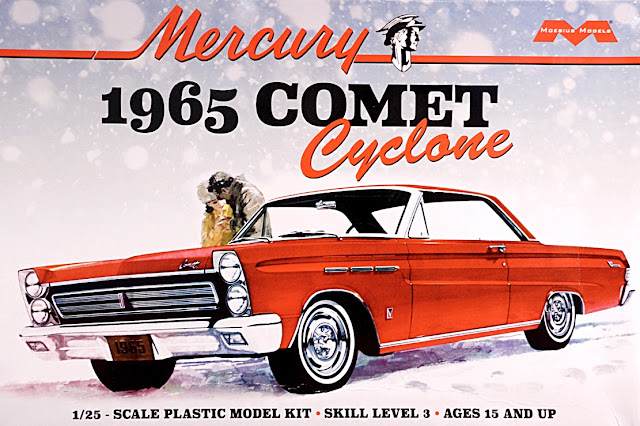 THIS KIT COULD BE IDEAL for astronomers, as the name includes a planet, a solar system phenomenon, even a weather system. But actually, it’s a car!


Mat Irvine: Moebius Models continues to issue ‘annual’ cars that have been omitted by other kit companies. With this new 1:25 scale 1965 Mercury Comet Cyclone, Moebius fills the gap left by AMT, which made 1964 and 1966 Comets, but missed out the year between.

The components (below) include three small chrome-plated runners. 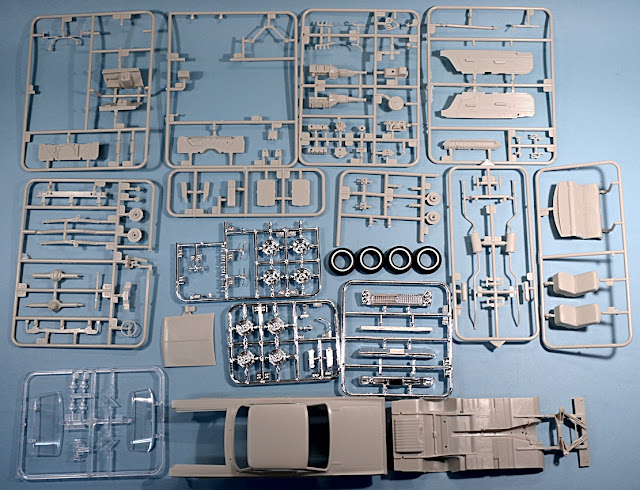 The Moebius Mercury Comet has a one-piece body, full engine and running gear details, plus a multi-piece interior. Options are few, though stock and magnesium alloy-style wheels are supplied, and you have a choice of stock or finned valve covers on the engine. 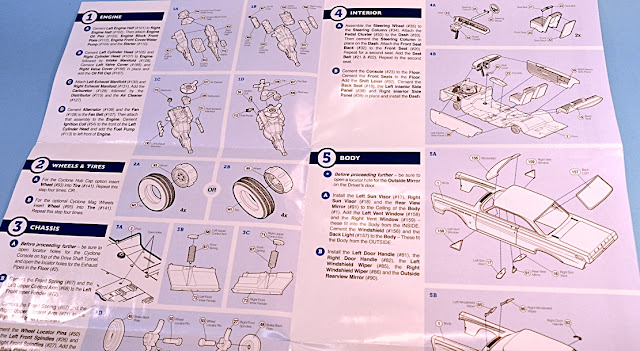 Future versions of the Moebius Mercury Comet will differ in detail. To allow for this, the comprehensive instructions (above, below) include details on drilling out holes for the centre console, a procedure that also applies to the exhaust system. 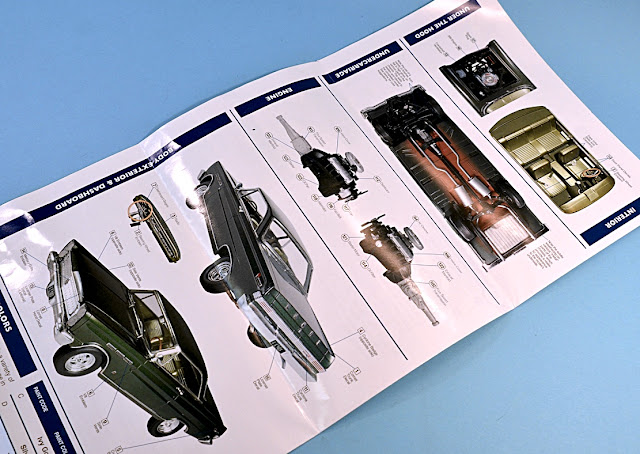 The chassis has separate exhausts, springs, and rear axle. The front suspension has wheels that can be posed, but there’s no tie-rod linking them, so if you turn one wheel the other does not turn to match the same angle. So it’s best to decide which way you want the wheels to point, and cement them in position.

The twin exhaust pipes (below) are aluminium, though note that the part numbers are opposite to the way they are marked on the instruction leaflet. This is one small correction to the plans, the other is that the windshield and backlight should be fitted from the outside, rather than inside as instructed. 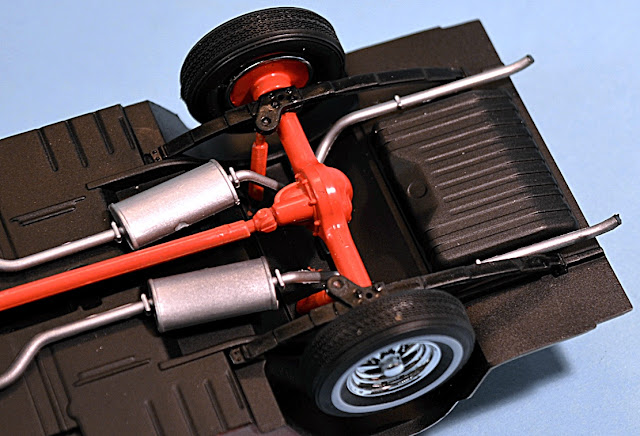 The front stub-axles are sandwiched between the lower arm, attached to the chassis, and the upper springs which are fitted to the under-hood inner fenders. Positioning (below) is a bit tricky, but just needs a bit of perseverance. Usefully, the vinyl tyres have thin whitewalls already applied, so you have the choice of using them either with whitewalls out, or whitewalls in, in which case the tyres look black. 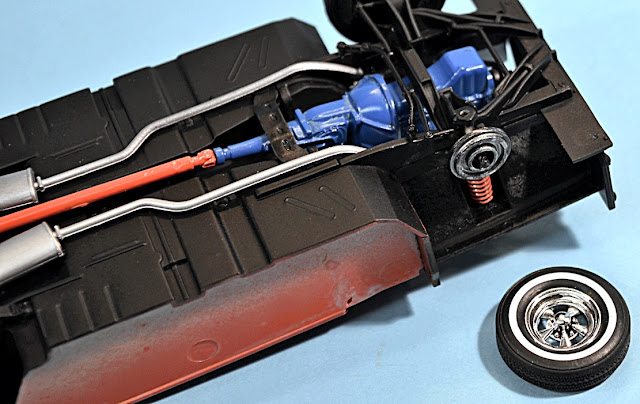 The interior (below) features front bucket seats with lap belts, plus a one-piece rear seat. The instrument panel has separate decals for the car's five dials and radio. I chromed the main panel with Bare-Metal Foil, then filled in appropriate areas with satin black. Bare-Metal Foil can also be used for the inside door handles. 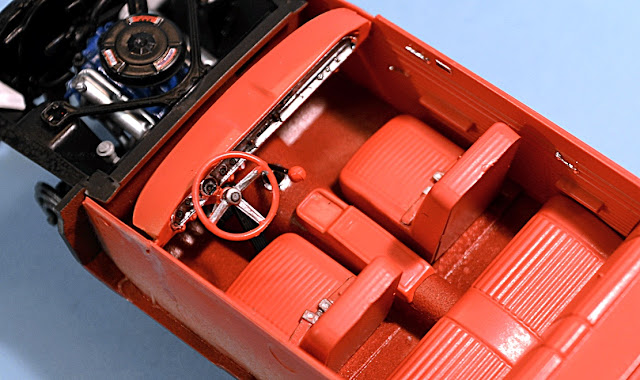 As with most Moebius car kits, full details are given for stock body colours, here 16 in all, with five co-ordinated interior shades. I painted the body in Testors Bright Red, with a two-tone red interior. The engine block is listed as gloss black, but many Ford engine blocks were mid-blue, and that’s the shade (below) I used here. The chassis is black, but to break it up visually, I finished the rear axle and drive shaft in the same red as the body.

The instructions give an alternative for the chassis finish, with oversprayed body colour appearing on the underside. 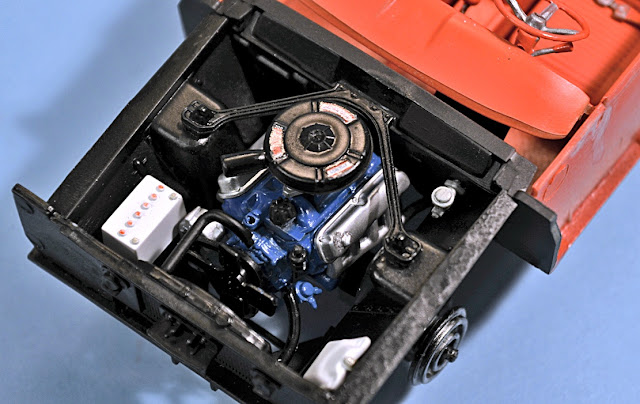 One slight modification is that front grille of the Cyclone version is mostly black, not chrome. This isn’t indicated in the painting details in the plans, but is shown on the box-art. Decals are supplied for the badges, and even the COMET lettering on the trunk lid. This is supplied as one decal, but if you wish, the letters can be cut out and applied individually. I recommend using decal solvent for the lettering, whether you apply it as one or five items.

Bare-Metal Foil has now been added (above, below) to the bodywork 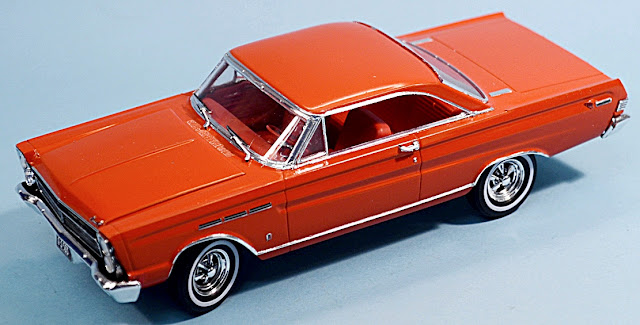 There’s no hood support rod, but one can be easily added (below) using a length of thin wire. 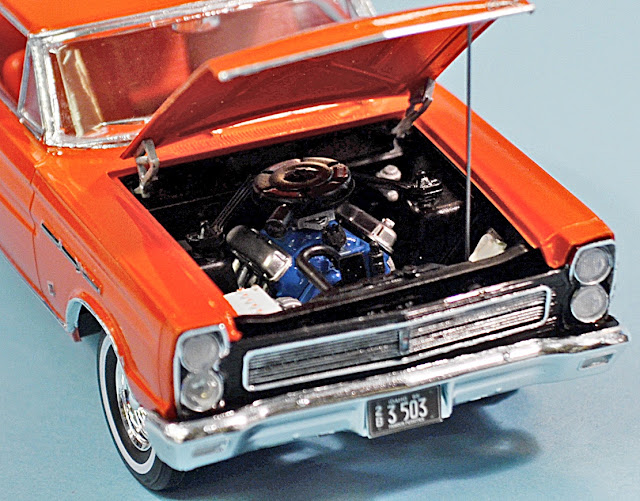 The Mercury Comet is a 1960s-era automobile, so the stylists included chrome accents, although, unlike some of its contemporaries, the brightwork is not overdone. The window surrounds are chromed, though the kit’s windshield, rear window, and quarter lights have the chrome frame built into the clear glass. The side window frames and the roof drip channels are moulded into the bodywork. The only other chromed areas are the thin strips that run along each side of the car, and around the wheel arches.

Confirmation of the grille colour is shown by an image on Mercury Comets that appeared in Collectible Automobile magazine (below). The finished grille component is shown centre, on top of the instruction manual. 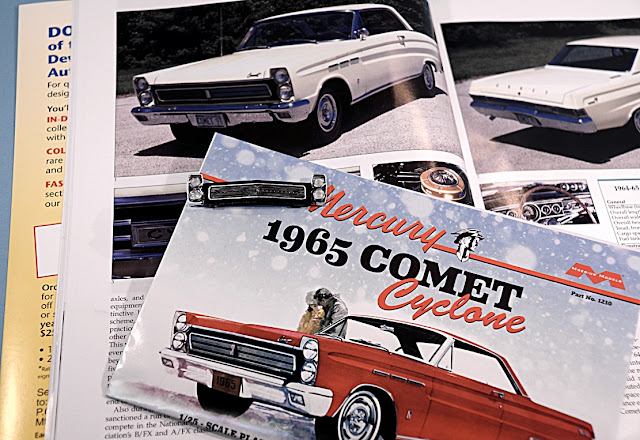 Summation
An interesting kit of a 1960s retro-car, which certainly fills a gap in the kit collector's line-up.

SMN note: The Mercury Cyclone is ideal for kit-bashing, as shown by the hugely fast racer (below). Note the roll cage and dash-top tachometer, plus (of course!) the custom running gear. Pic shown courtesy Motor1.com.