1:24 SCALE FIGURES FROM MASTER BOX: PIN-UPS FROM THE WILD WEST 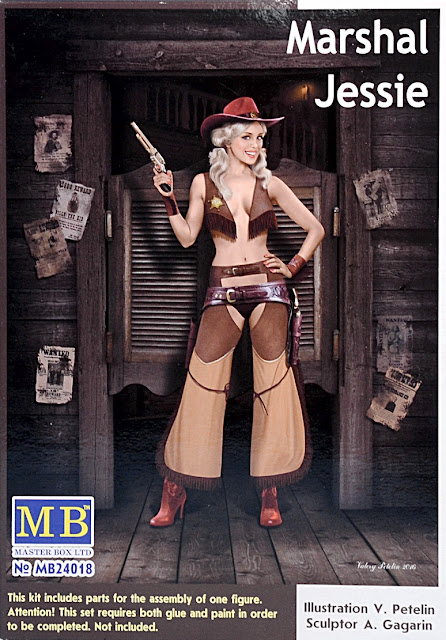 RETRO-ERA SUBJECTS ARE A POPULAR FASHION STATEMENT and these 1950s-style figures from Master Box should be popular with nostalgia fans.


Mat Irvine: Master Box of the Ukraine makes a wide range of 1:35 military figures, and a 1:32 series that features World War II pin-up girls, intended to be posed with aircraft, especially ones which had such girls painted on as nose-art. The pin-up girls have since been enlarged for 1:24 scale aircraft modellers, and of course this is also a standard plastic kit car scale.

The boxes and parts for the 1:24 scale Wild West figures of Marshall Jessie (header) and Thunder Spirit (below) show that there is a definite case of ‘over-boxing.’ The size of each runner indicates that you could likely get a dozen or so figures in each box! 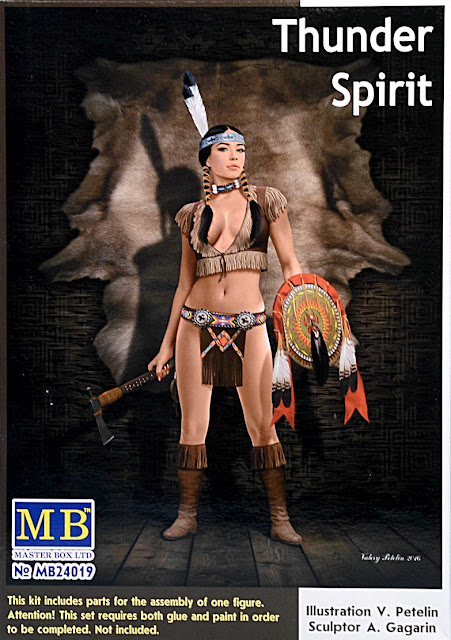 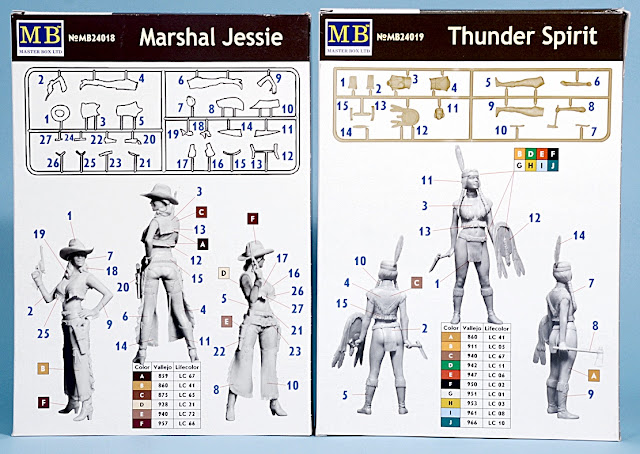 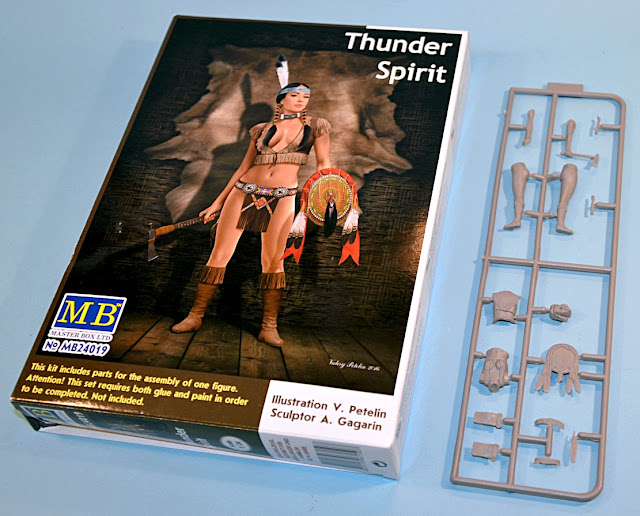 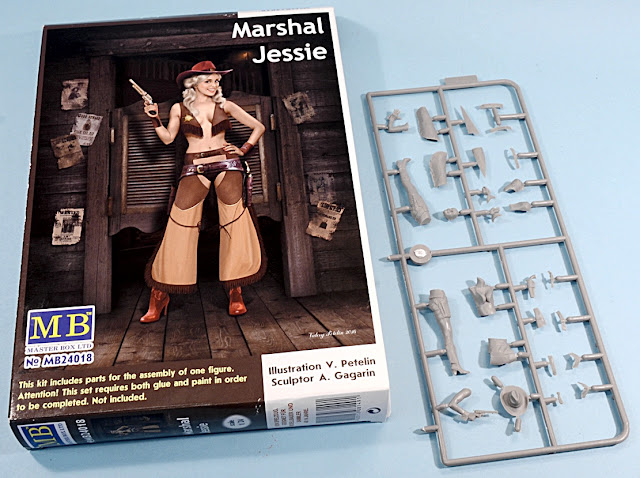 The Wild West subject matter makes using Marshall Jessie and Thunder Spirit perhaps slightly limited, though if you like miniature pin-ups that’s probably enough to add them to a display shelf. Thunder Spirit does seem to embody elements of true Native Americans, though Marshall Jessie seems to be more a combination of old movies like Emmanuelle and Carry On Cowboy.

So I wasn’t quite sure of how or where to feature Marshall Jessie and Thunder Spirit when they were finished. Well, the recently reissued AMT Lil’ Stogie made an ideal display partner. It’s a take on a Wild West theme, so the Master Box gals seem to go very well indeed.

For the western setting (below) I used the AMT Lil’ Stogie as a prop. The greenery and saguaro cactus came from Woodland Scenics Scene-A-Rama sets. 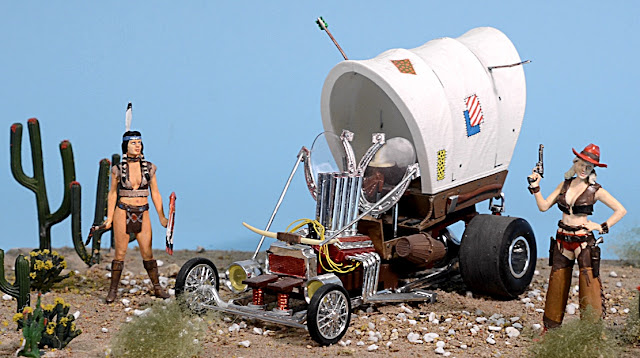 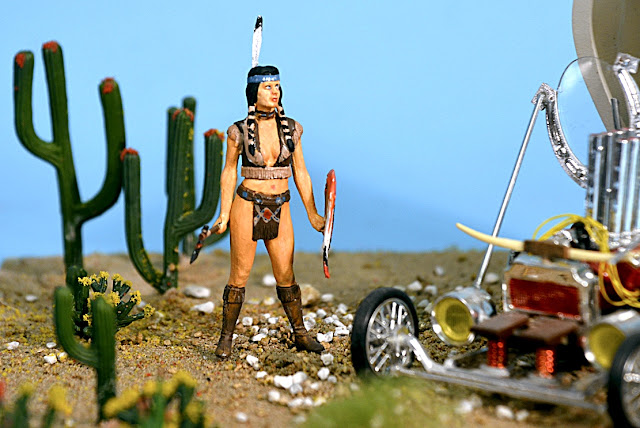 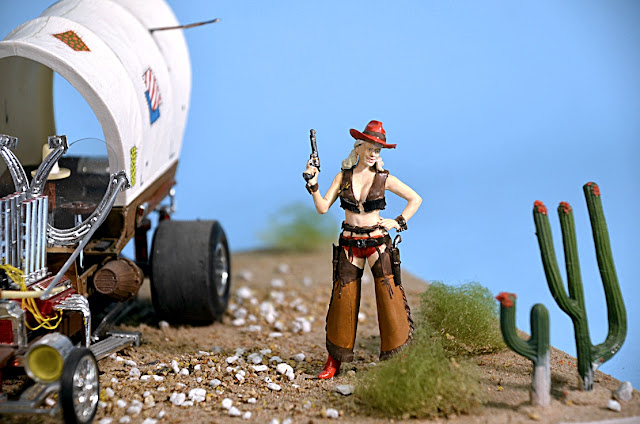 Assembling the figures is neither for the inexperienced modeller, nor for the faint hearted. Not only are there a number of fiddly parts, but painting them will also tax even the most adept.

Instruction details are on the boxes (no leaflet is included) and show only a completed figure, with generalised numbering and arrows. These show which part is which and what goes where, but even then the Thunder Spirit runner has two extra parts that aren’t shown on the box. However, the full-colour box illustration is very useful, though when you realise that the art is twice the size of the model figure, then some painting details are, well, up to you.

Maybe this female duo from Master Box is a little sexist, but a newer releases balances things out slightly, as it features (below) Bob and Sally - The Happy Couple. 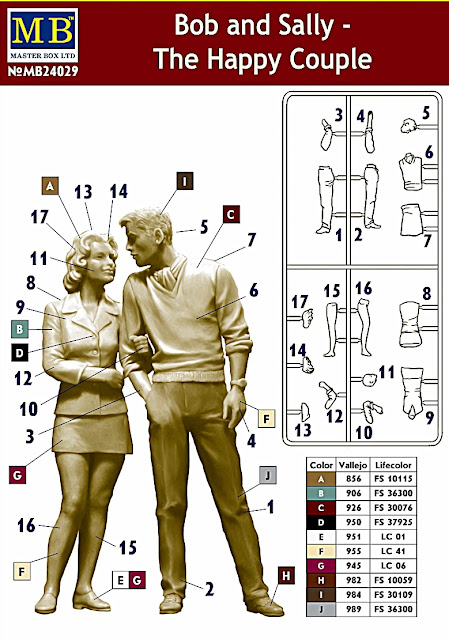 About figure models
Figure kits are not new, having been made since the early days of Airfix and Aurora, to modern-day fantasy movie stars, as modelled by Moebius.

Figures of all sorts have also formed part of a larger subject, such as the pilot in a Spitfire cockpit. And model cars are also enhanced with decent figures. Even early kits, such as the Revell Pontiac Club de Mer (below) and Lincoln Futura dream cars, came with driver and passenger figures. 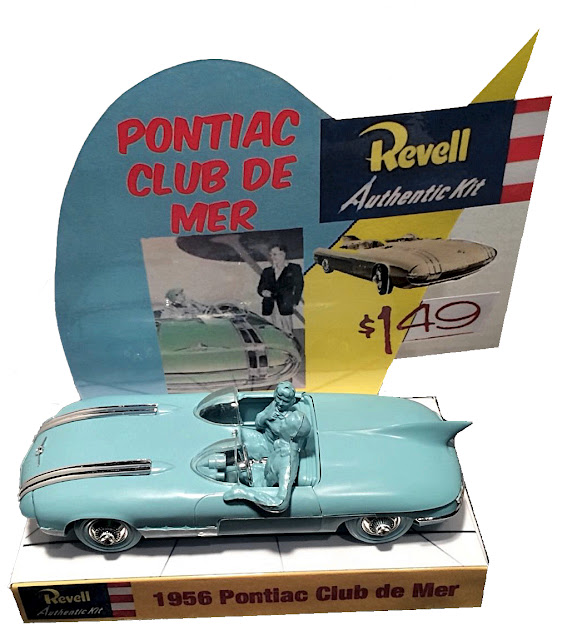 It has been only fairly recently that model makers have been able to buy stand-alone figure kits in 1:24 or 1:25 scale to pose with completed car models. Many of these are resin kits from ‘garage’ companies, but now conventional injection styrene kits are becoming available, and one of the main suppliers is Master Box.

SMN note: Master Box has a wide and growing range of figures, with series titles that range from Dangerous Curves and Pin-up, to Ancient Greek Myths and Spaceport. And that’s before even starting on the wide-ranging military ranges. It's good to note that MB rightly promotes the illustrator and figure sculptor, as they are clearly labelled on the boxes.

Unpainted space-steampunk figures (below) from Master Box. Fantasy figures like this will help fill a big hole in the offerings from mainstream kit manufacturers.