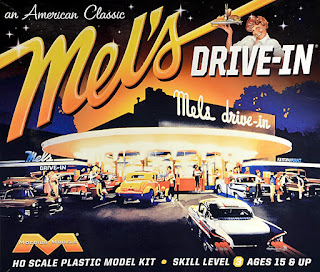 THIS 1:87 SCALE MEL’S DRIVE-IN KIT will please model makers and movie buffs alike, as it features the famed restaurant seen in the classic 1973 movie American Graffiti.


Mat Irvine: Mels drive-in - or rather ‘Mels drive-ins’-  exists for real, as there are seven of them, with an eighth opening in 2018. However, the original diner seen in the movie was demolished more than 40 years ago. But no matter, for Moebius takes us back to days past, when Mels was situated at 140 South Van Ness Avenue, San Francisco.

Moebius decided to add this iconic building specifically for 1:87 scale (H0 gauge) railroad layouts, and of course it is also to the same scale as countless H0 vehicles on the market. 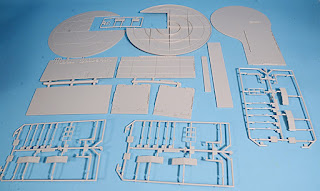 The bulk of the kit is in plastic (above) but the interior fittings and booths (below) are built up from card cutouts, a feature common with many other H0 railroad building kits. Clear acetate is supplied for the windows, and various card signs are provided to place at your discretion. 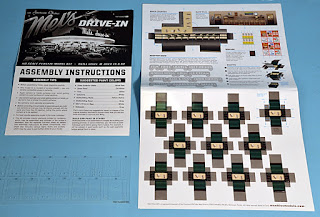 The structure is primarily in two parts: a large rectangular building with a Mels Drive-In sign, and the circular diner itself. The rectangular building is the easiest to tackle first, as there are no windows, just four walls and a roof. It’s therefore simple to assemble and paint in appropriate colours.

When assembling the diner (below) it's best to fit the windows before walls are added. 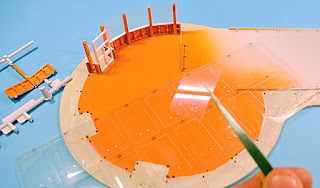 I found it best to paint the individual components of Mels first. I then attached them all to the base. The instructions indicate cementing the square building in place before this, but I reckon it's easier to wait until the diner walls and doors are in place. 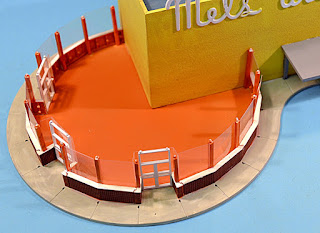 Both doors and windows have pre-cut clear acetate window glass. This is supplied on a sticky-back sheet, so just peel off and apply as required. Clear glue is recommended, but the pre-cut holes that fit over the pins seem to be adequate by themselves. One point though is that, again against the instructions, it’s easier to put windows in place before the relevant frame is attached to the floor.

Assembling the press-out dining booths (below) is not a difficult job. 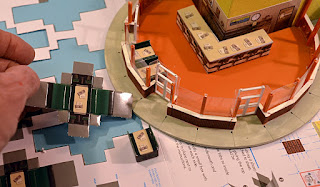 In American Graffiti you never see inside Mels, only glimpses through the windows. However, the position for the counter and various booths (below) is fairly logical, and most will fit only in one position. Having been pre-assembled, the assorted parts can be then attached to the plastic base with clear adhesive. 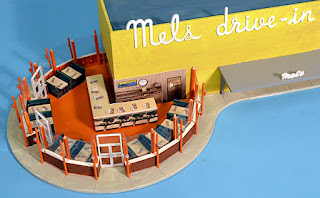 The circular roof (below) is in two parts, upper and lower. I painted the top in mid-grey with white edging, the underside in light ivory.

Fitting the roof is helped by all window, doors and lighting poles having locating holes in the roof underside. But it could be easier to snip some of the locating pins off before fitting, as it won’t affect the final assembly.


Even at this relatively small 1:87 scale, the kit assembles to make a fair-sized structure, as proved by the Humbrol tinlet (below) added for scale.

There is a small problem with the kit, once it is finished. And it's nothing to do with the model itself, but what to display with it. In order to mimic American Graffiti precisely, you need to have miniatures of the exact vehicles that were used when shooting the movie. They include a 1958 Chevrolet Impala, a 1932 Ford Deuce hot rod, a ’55 Chevy, ’58 Edsel, even a Citroen 2CV. Many vehicles are available in H0 scale, but none of the specific US automobiles seen in the movie. The closest are to 1:64 scale, but the scale difference is too great. A dilemma on which to ponder!

About Mels
This particular Mels drive-in was originally chosen as trees concealed more modern buildings in the background, as the movie was released in 1973, but set in 1962. However, a recent edit (usually on DVD) shows that the whole background has been changed in post-production anyway, and features a sunset. This is seen on the titles, with most of the movie action taking place over that evening.

And here’s the original trailer:

SMN note: Retro subjects are all the rage, and although 1:87 scale is a little small, the Moebius Mels drive-in would look excellent repurposed as a building in a 1:72 aviation scene. Or, with no parked aircraft and without trying to make an American Graffiti lookalike, there are plenty of 1:87 scale people and automobiles available to populate an attractive diorama setting.

The 2CV ‘tin snail’ is available from several manufacturers. including Herpa and Wiking. And quite a few 1:87 scale US cars are available too, even if getting close to the American Graffiti originals will almost certainly involve modding and repainting.

Pedant's comment: The Moebius box clearly shows Mel's with an apostrophe, yet the model does without, as does the diner chain. So take your choice!

Click here to see these handsome miniatures from Oxford Diecast.

Click here to view the Moebius Mels drive-in at Amazon.