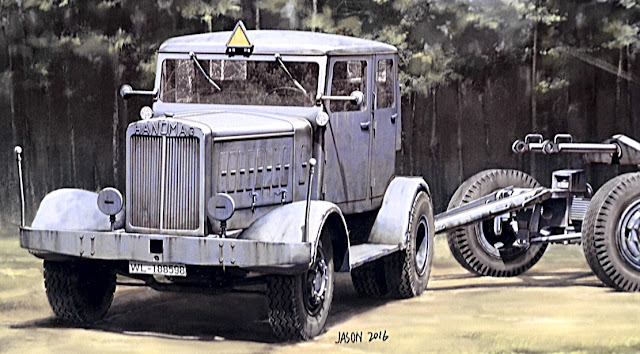 A WHILE AGO WE REVIEWED the Takom 1:35 scale V-2 rocket, with launch pad.


Mat Irvine: However, this was intended to be just one part of the V-2 transporter setup, with a Meillerwagen transporter-erector, and a Hanomag SS-100 heavy tractor tow vehicle. Now the whole kit has arrived for review.

As this complete kit is a large item, I decided to split my review into three parts. The V-2 and launch stand have been covered, so here is the next part, the Hanomag SS-100 tow tractor.

The Hanomag is highly detailed with separate engine, chassis components, and drive chain. The military version featured in this kit was adapted from an original civilian vehicle, named the Gigant. It was not, as you might assume, a four-wheel drive vehicle, instead power went to the twin rear wheels. 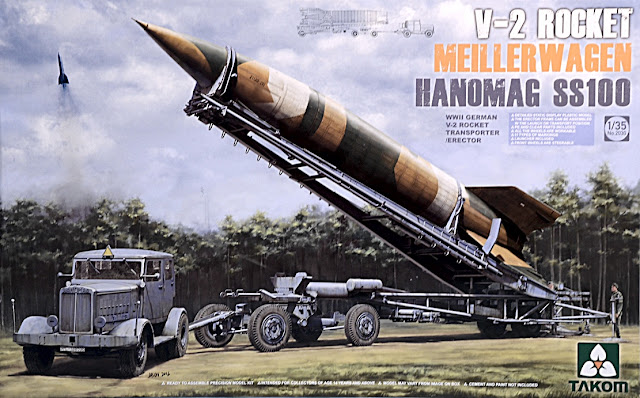 The SS-100 features steerable front wheels, though care was needed when I came to attaching the tie-rod arm, which requires a heated screwdriver or soldering iron to melt the pins into place. Attaching the wheels was also slightly tricky, as I wanted them to revolve, but I found that the available gluing areas were quite small. Mind you, with a static kit, does it actually matter if they turn?

Parts layout for the Hanomag (below) though (oops) the eight tyres of the Meillerwagon have been included in this pic. 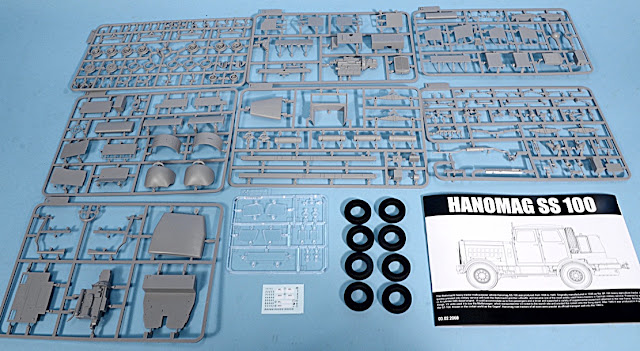 Actually, the Hamomag uses seven tyres: six main, and a spare. They are shown (below) with the runner for the wheels. 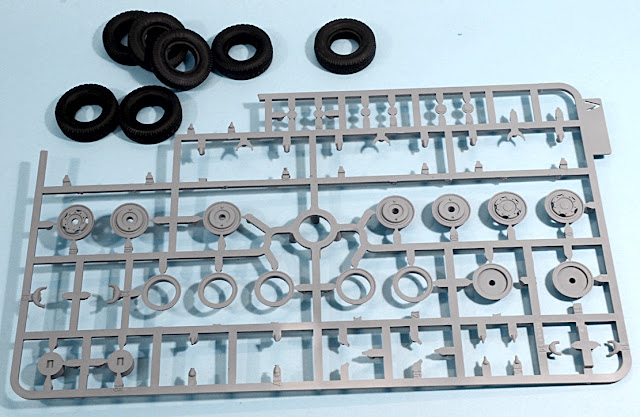 The SS-100 has a complete interior, with driving controls, front and rear bench seats, even a lamp fixture for the inside of the roof. Decals are supplied for the instrument panel.

The cab sides each consist of seven parts: the frame with two doors, each of which is in two halves, plus two clear parts for the window glass. Note that the window glass fits from the inside, rather than being sandwiched between the door halves. The front and rear are almost identical in size, so check the part numbers.

I decided to cement the engine cover and radiator housing (below left) to the cab front. 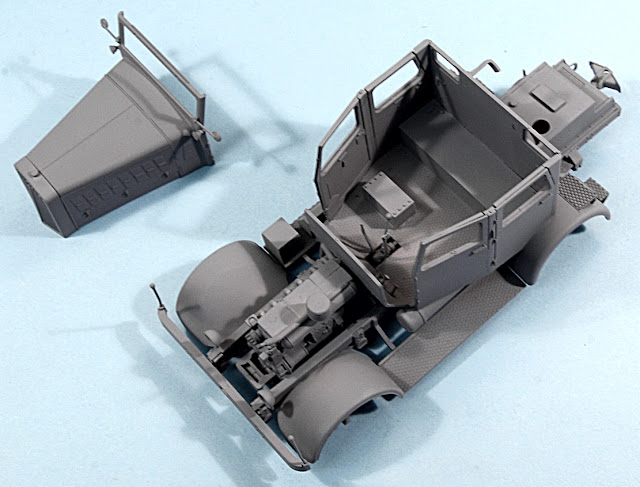 The interior (below) is shown completed, with decals and paint details added to the instrument panel.

Behind the cab come the fuel tank and storage box, and the rear tow hitch that will be attached to the Meillerwagen. The components to really watch here are two extremely thin marker posts, which should be attached to each end of the front bumper. These are delicate and prone to breaking, so you could replace them with piano wire or fine metal rod. Otherwise, I found no serious assembly problems.

I finished the assembled SS100 (below) in Humbrol Dark Green 163. Note the vulnerable marker posts at the ends of the front bumpers. 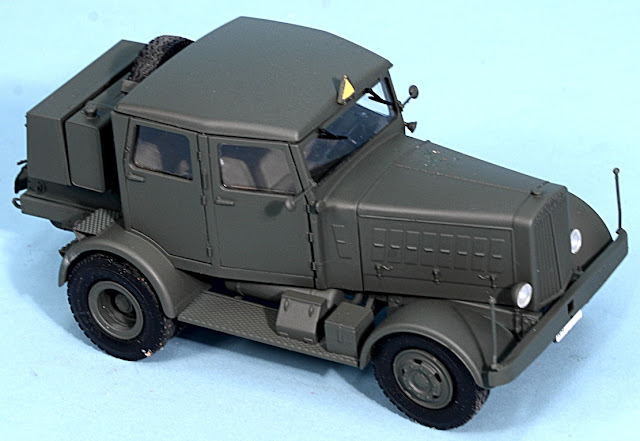 A camouflage scheme (below) is pictured on the box side panel.

Other marking options (below) are included in the instruction booklet. 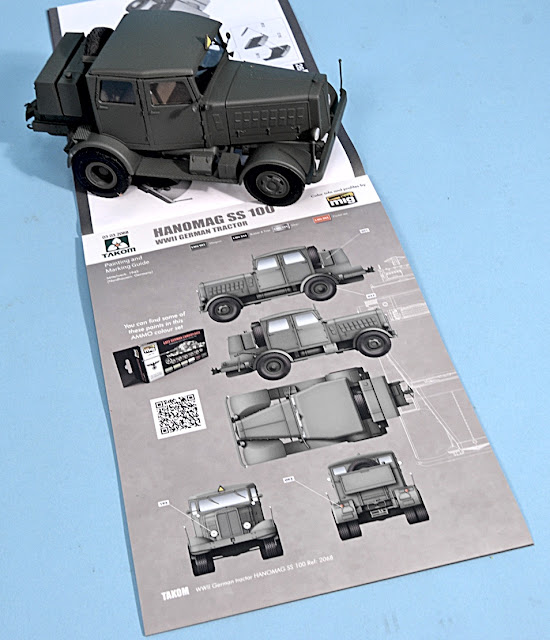 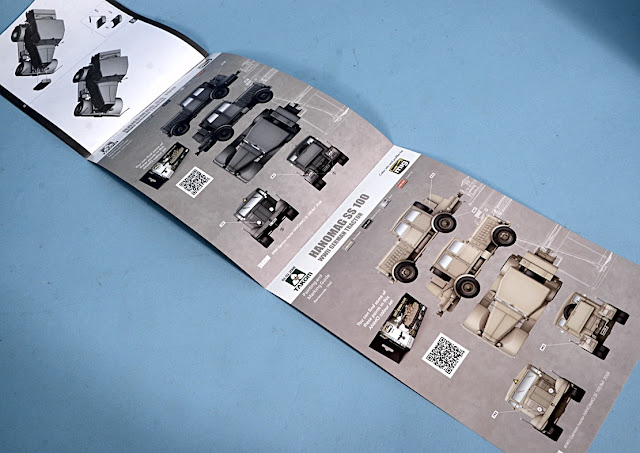 For these pictures (below), I placed the completed SS-100 on a suitable chunk of landscape that I constructed from assorted off the shelf materials. A cut section of expanded polystyrene made a rigid lightweight base, while a scattering of scenic grass was all that was needed to lend an air of realism. 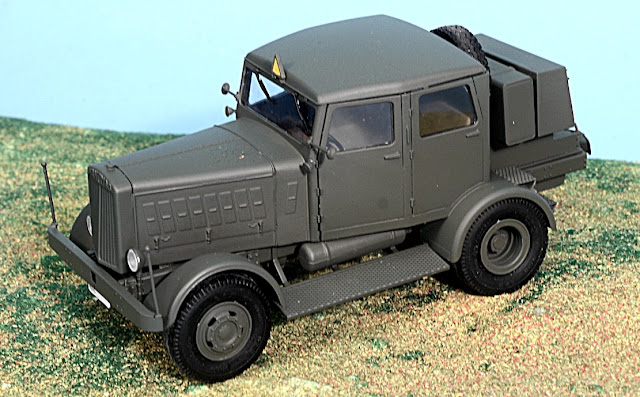 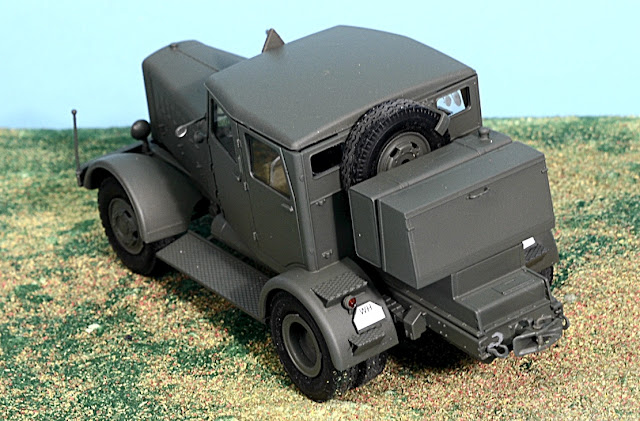 No figures are included with this kit, more’s the pity. However, there is certainly no shortage of suitable period German figures, which are available from a multitude of model companies.

Watch this space for my third review, the complete V-2 transport and launch assembly.

Click here for the SMN V-2 and launch stand review.