BUILDING THE SPACESHIP 'DISCOVERY' FROM 2001: A SPACE ODYSSEY 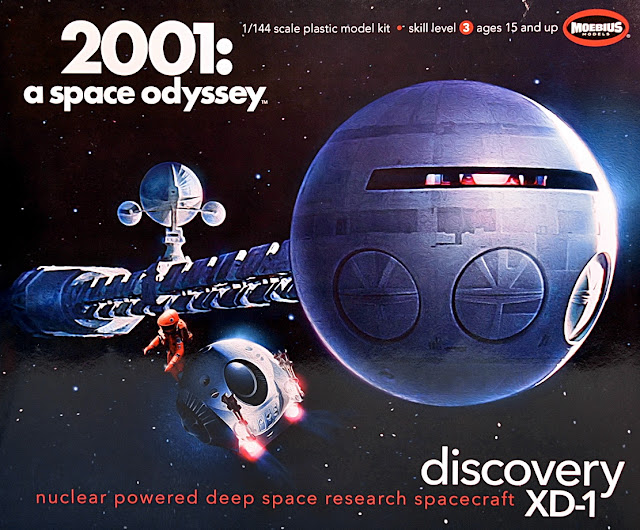 A TOTAL OF MORE THAN 500 PARTS distinguishes this 1:144 scale Moebius kit. The subject is the Discovery, spacecraft star of the classic science fiction movie 2001: A Space Odyssey.


Mat Irvine: On opening the box, the kit does look rather daunting - after all, there are over 500 parts. However, laying them all out logically makes things become clearer. Many are duplicate runners, to deal with the many containers along the fuselage spine, the three main engines, and trio of cargo-bay doors. There are also various parts for the antenna assembly.

The kit was designed for Moebius by Adam Johnson, who has compiled books on designs from the movie.

The kit instructions follow a logical assembly path, with the main fore and aft sub-assemblies being dealt with first. These are followed by the containers, spine, and antenna assembly. Actually, I found that putting the kit together falls naturally into two main sections, the spine components, and everything else. 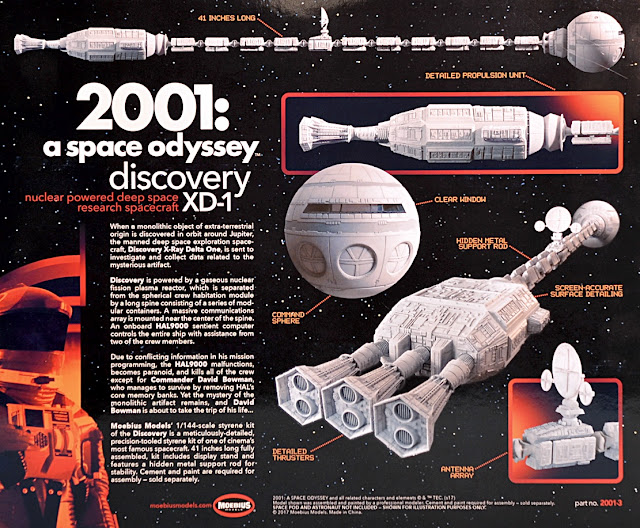 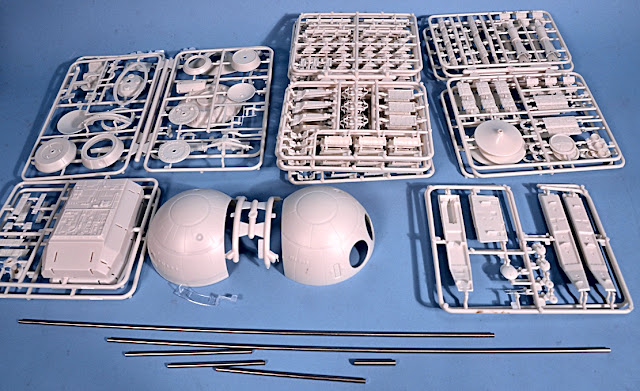 You need to decide how you are going to paint the finished model. Details are given on the back page of the instruction booklet, with the rider that, if in doubt, check stills from the movie itself. The main colour is matt white, and basically that’s it. Unlike many - even most - science-fiction movie- or TV-based spacecraft, the Discovery has no weathering. Stanley Kubrick obviously took the line that, “It’s a deep-space craft, so what is there to get it dirty?” which is a view to which I also subscribe. OK, there may be the odd micro-meteorite hit, and harsh solar radiation bleaches colours, but as the ship is white in the first place, they are not going to have much visible effect.

But of course it isn’t quite as straightforward as that. Yes, you could simply spray everything matt white, but it won’t look quite right. Much of the movie’s overall effect is not from weathering, but from careful lighting.

In deep space, the Sun is the only light source. There could be reflection from planetary bodies, but the Discovery spent most of its time in deep space on the way to Jupiter.

Director Stanly Kubrick lit his Discovery model - which was some 18 metres (60 ft) long - with concentrated single-source lights, which he combined with very long camera exposures and a small lens aperture (f/64) to give an almost infinite depth of field, so the whole ship remained in sharp focus. Kubrick’s lighting also created deep shadows, which appear black - very, very, black.

In response to this, the Moebius instructions suggest painting the whole model primer-grey, followed with a matt-white top coat. After a bit of experimentation, I actually went one stage further and painted everything matt-black first, then over-sprayed this with matt white.

There is a break to the overall white finish however, and that consists of some light-grey panels on the command sphere. I sprayed these with Humbrol light grey, masked them off, then followed up with the matt black and white. After removing the masking, I applied a mist of matt white to ‘pull’ the grey into the main overall matt white. The area around the flight deck window is matt black, but otherwise that’s about it. 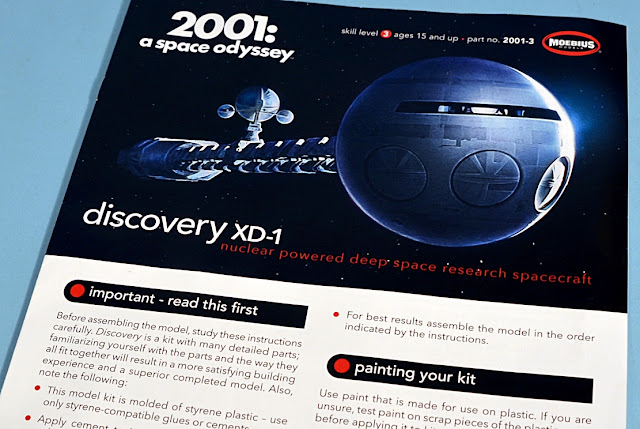 With the main sub-assemblies completed, attention can be turned to the spine and containers. Here you have ten spine supports, six in front of the antenna module, four behind. Then there are five different cargo containers, listed as A, B, C, D and E. You need six of A, nine each of B and C, and 18 each of D and E. However, be careful to keep track of the parts. Although some are spares (there are actually enough parts for 12 spine supports, but you only need ten), there are the correct number of parts for the five module shapes - including the six needed for the antenna module - and each module is five parts. So don’t lose any!

The antenna assembly is also done at this time, and here the part that surrounds the spine also sandwiches the shortest of the six metal tubes. Into this slides the longest tube, one end going forward to finally attach to the nose section. The other goes backward to the main engines. Ideally the tubes need to be cemented in place with superglue or resin. But you will then end up with a model over a metre in length, and the problem could then be to find somewhere to display it.
Assembling the aft engine section (below). 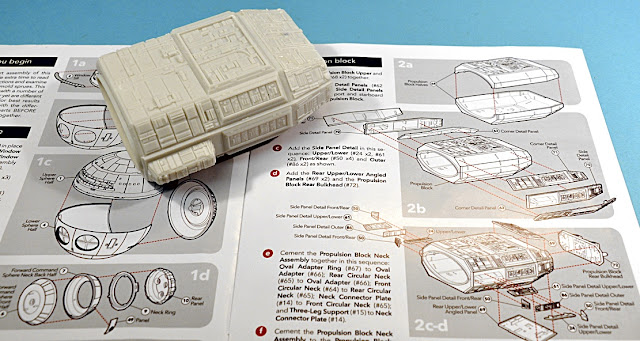 Fore, mid, and aft main components (below). The command sphere is still in separate halves, to allow the window assembly to be fitted last.

Keep track of the spine module containers (below) by assembling them in order, making a note if necessary. Containers D and E have yet to be assembled. 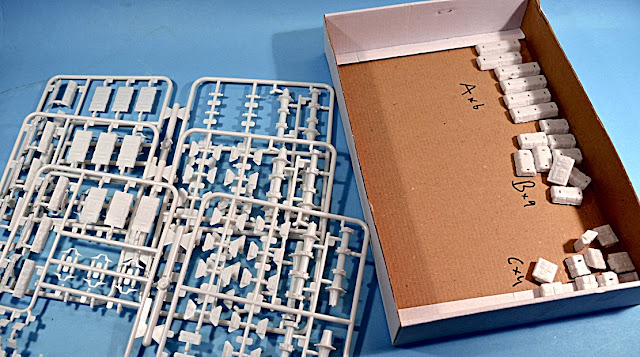 Assembly of the spine supports (below). You need ten of these - six forward of the antenna, four aft - but there are enough components for a dozen. 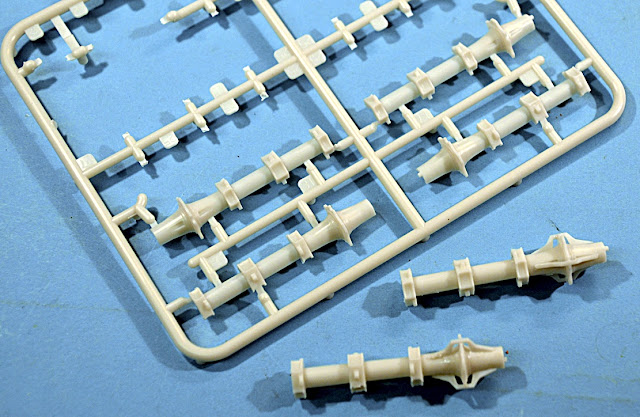 Vertical test fit (below). At left, the nose, forward spine, and antenna. At right, the aft spine and rear engine assembly. The spine containers have yet to be fitted. 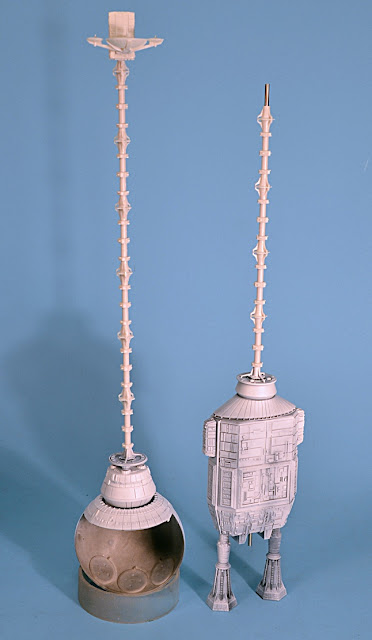 Horizontal test fit (below). The 30 cm (12 in) ruler gives an indication of size.

Initial painting of the grey areas on the command sphere (below). The grey was masked, matt black sprayed on, followed by matt white. The masking was then removed and everything misted again with matt white, to lighten the grey. 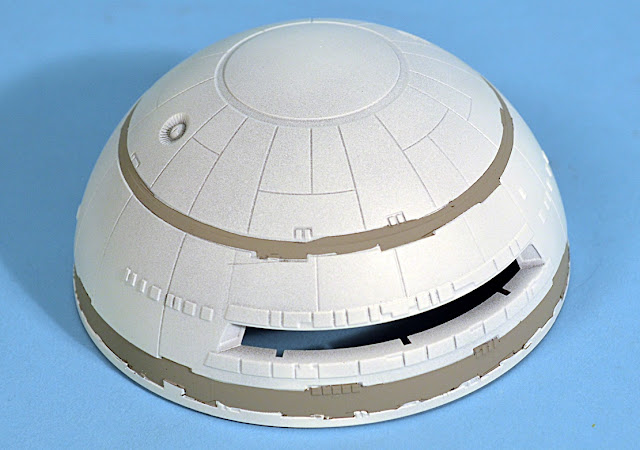 Starting the container assembly (two pix below). Note that precise details are given for what goes where. The antenna assembly receives six containers for the sides and base. 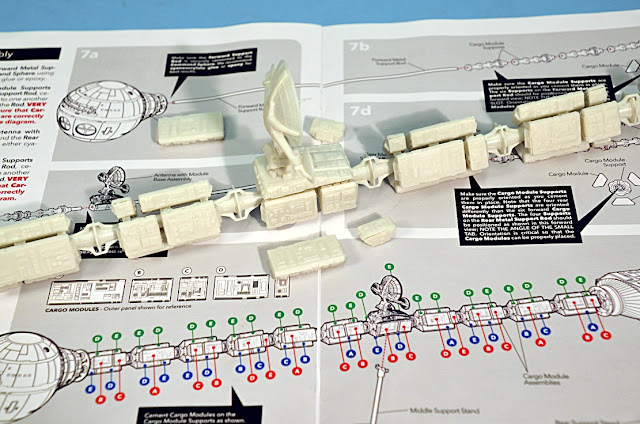 Trying out the best finish (below) using the three main engine bells as test subjects. I sprayed matt white, primer grey and matt black, followed by matt white over the top. 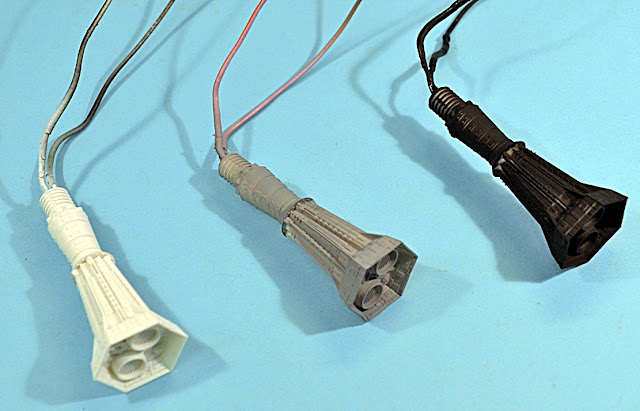 The engine bell (below left) shows no difference, but grey (middle) is a possibility and is recommended in the instructions. But spraying over matt black (right) was the method I used for this review kit. 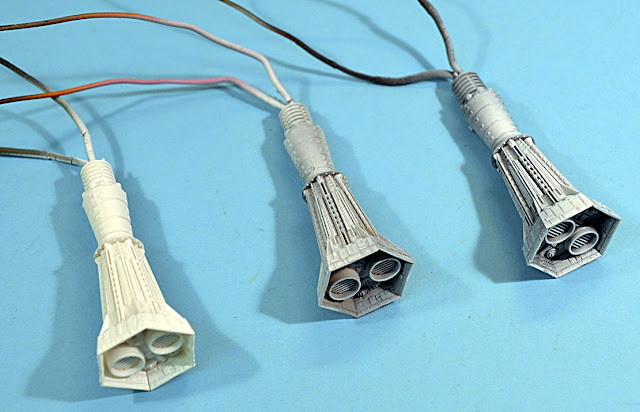 The two outer engines have pins, visible on the right (below). The centre engine uses the metal support tube that passes through the main assembly. 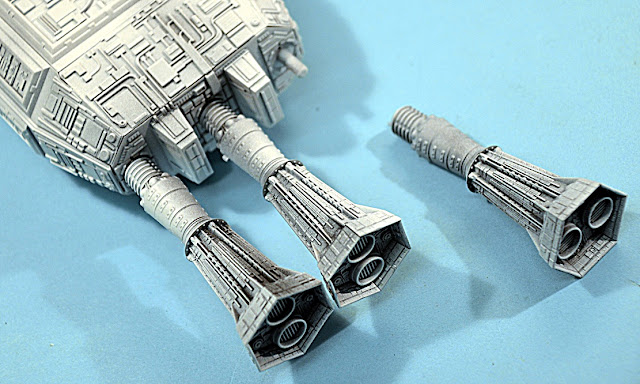 Test painting (below) the spine and some containers. Here, matt black has been sprayed on first, followed by a mist coat of matt white. More white will be added later, but some of the ‘black effect’ will remain in the crevices.

The centre section, antenna and containers (below) with their final matt white finish.

The hexagonal exhaust surrounds of the main engines (below) are particularly well modelled by Moebius. They match on-screen images that show the Discovery drifting silently past the camera. 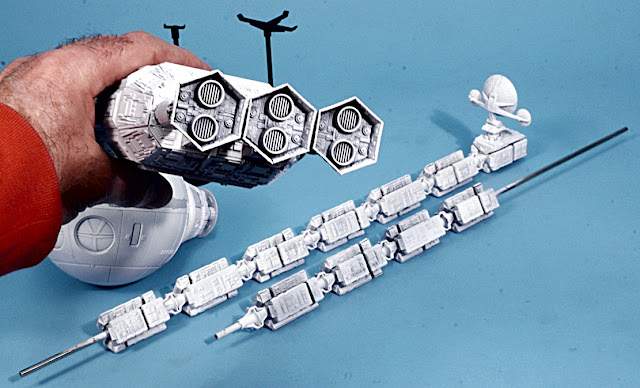 The finished model (below). Some indication of size is given in that the Discovery only just fits into my photographic studio area. 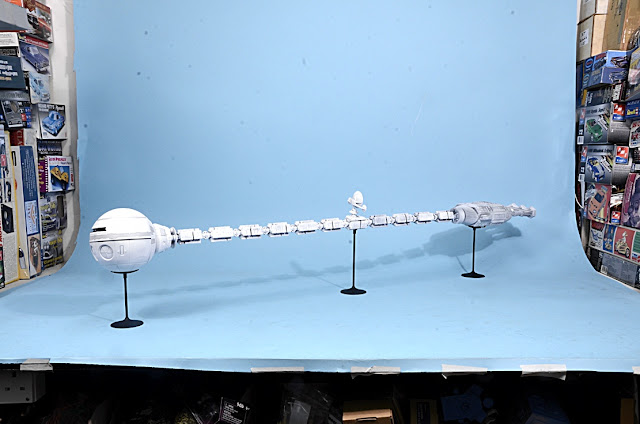 The Discovery looks very effective when shot against black (three pix below) when lit by a single light. My camera lens was set at f/25, the smallest aperture setting for my Nikon DSLR. I used Photoshop to crop the image and remove the support stands.

Discovery compared (below) to the Moebius Orion, also a 1:144 scale kit.

If you think you will be storing or transporting the Discovery, it could be better to not cement the tubes in place. If you leave them loose, the model can be split into shorter lengths.

Here is my suggestion (below) of how to break down the various modules. 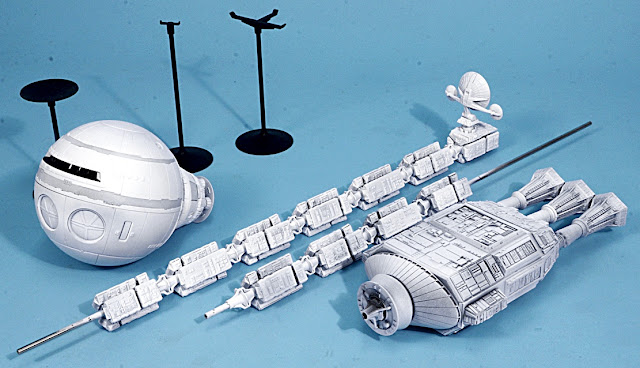 Click here for my previous article on this kit.

SMN note: The Discovery used in 2001 may not have had much weathering applied, but the multiplicity of panel shades allows plenty of work for super-realism enthusiasts.