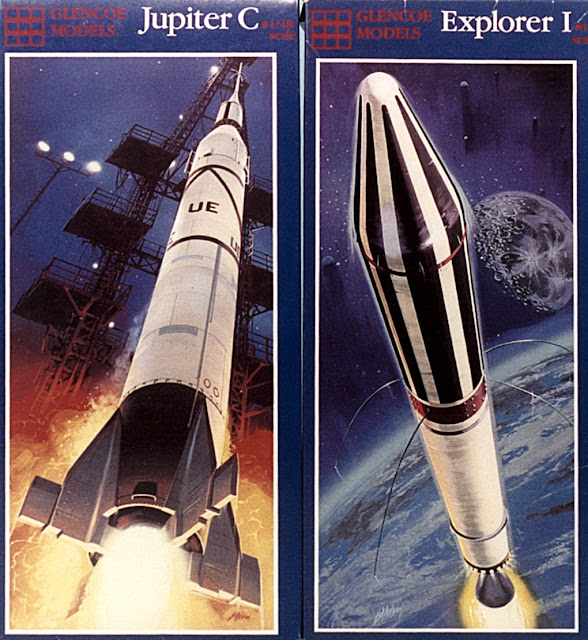 THE US LAUNCHED ITS FIRST successful artificial satellite, Explorer 1, on January 31, 1958. By February 1, it was in orbit, becoming the third satellite, after the Soviet Sputnik 1 and Sputnik 2.


Mat Irvine: Scale model companies of the time were not slow to celebrate the success of Explorer 1. Most  featured the satellite together with its launch vehicle, a modified Redstone rocket generally known by the name Jupiter-C. More correctly it was known as the Juno 1, a Jupiter-C modified by adding a fourth stage.

Only one model company produced Explorer 1 as a stand-alone kit. This was ITC (The Ideal Toy Company) which went for 1:6 scale, a kit that has been reissued in recent years by Glencoe Models.

For many years, the ITC Explorer 1 remained one of only three kits of uncrewed satellites. The other two were Explorer 18, and Vanguard 1, which had been intended to be the first US satellite in space. Even though a few more satellite models have been released since those early days, there are still not that many.

Here is a roundup of the Jupiter-C and Explorer 1 kits that have been released over the years.

The ITC box (below) featured a cutaway view of Explorer 1's interior.

Glencoe Models (below) have reissued the Hawk-Jupiter C and ITC Explorer 1. 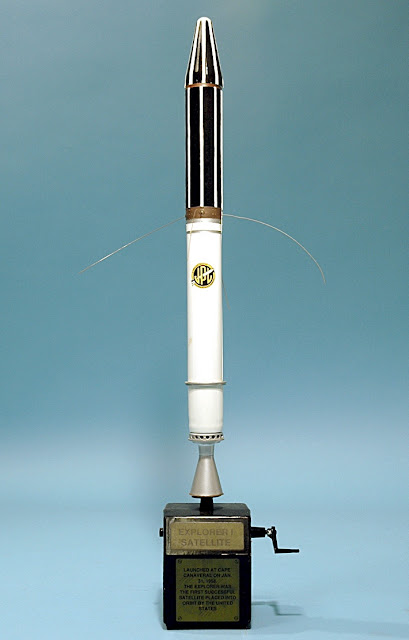 An assembled and finished 1:6 scale ITC/Glencoe satellite (above, below). Note the kit's working feature, the opening side panel.

Photos (below) seen on the Glencoe Explorer 1 box, which used official pictures of the time. This particular kit was released for the satellite's 50th Anniversary, 10 years ago. 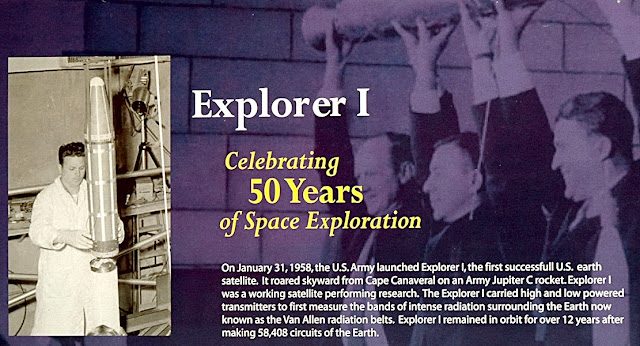 Box (below) for the original Hawk 1:48 scale Jupiter-C launch rocket. 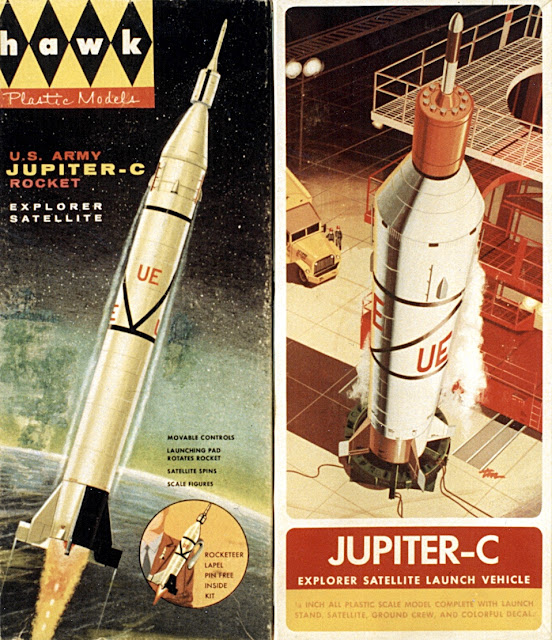 The Comet Jupiter-C box (below) featured attractive artwork. The kit included the satellite payload and a launch platform.

The Estes flying rocket (below) builds up to make a very acceptable static model, if you don't want to take it out and launch it yourself. 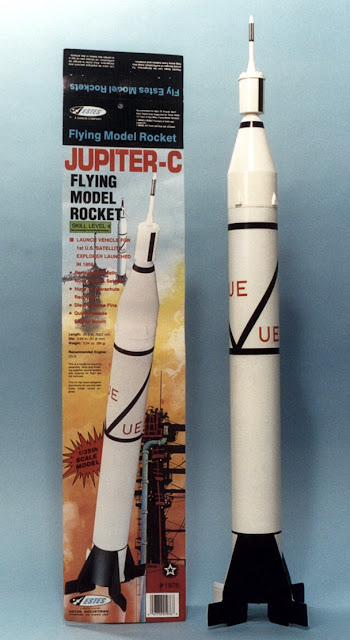 A good-looking box for a Monogram two-kit offering. This included two subjects, a Vanguard rocket and satellite (below left) plus a Jupiter-C and Explorer 1.

RealSpace Models Jupiter C (below left) and Mercury Redstone, both to 1:72 scale. 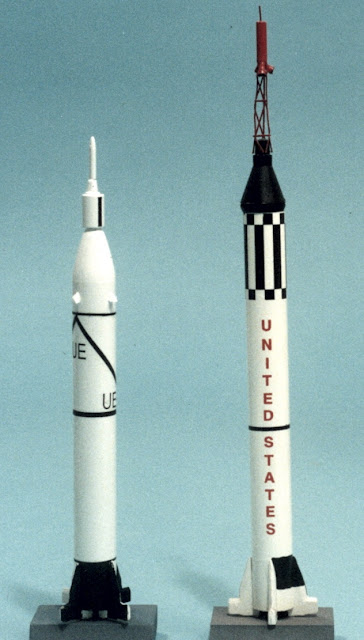 An interesting reissue of the Revell Jupiter-C (below left) matched by a Redstone ICBM, by Lodela of Mexico. This remains the only time these two launchers have been packaged together.

The Revell Jupiter-C (below) is generally reckoned as the most detailed kit of all. It included the gantry tower with work platforms, seven crew figures, and an Explorer 1 that could be removed from the rocket. 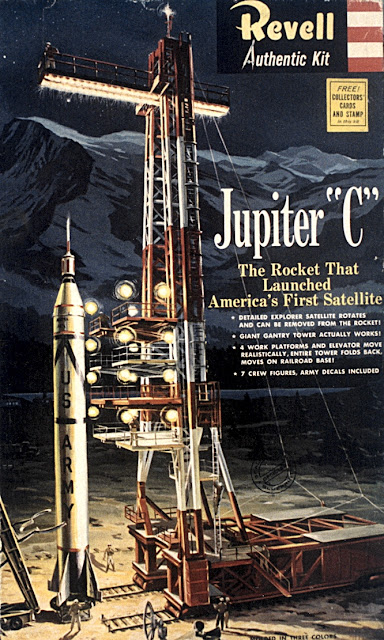 The assembled and painted Revell kit (below) looks fantastic when finished. Add some LED lighting, and it could stand up against most kits produced today. 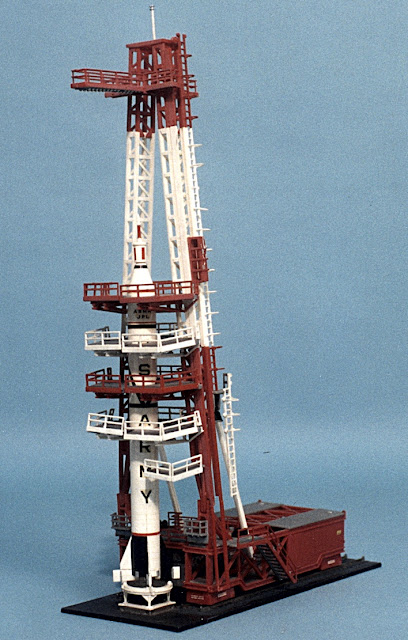 The Revell Jupiter-C kit was reissued in the History Makers series (below) in the early 1980s. Compare the artwork box used for the first release with this later photographic version, and take your choice. 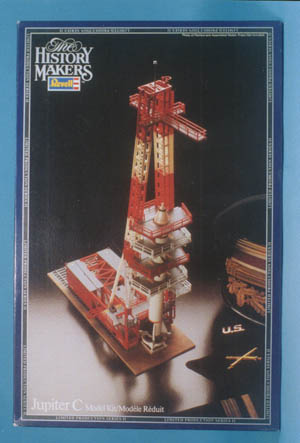 Unfortunately, the History Makers release (below) managed to miss the whole point of the rocket, which was to launch the Explorer 1 satellite. It was missing from the model! 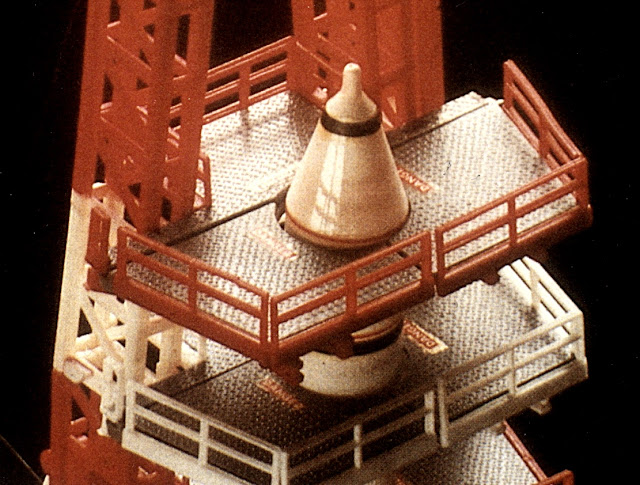