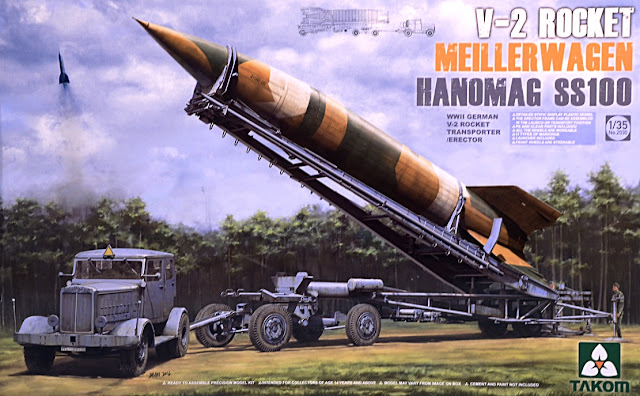 
Mat Irvine: So far in SMN, I have covered the Takom V-2 rocket with launch pad (in German, abschussplattform or ‘firing table’) and the Hanomag tow vehicle. Now it’s time for me to take a close look at the Meillerwagen transporter/erector.

This is by far the most complex of the three builds, and Takom appears to have included absolutely every single bit of the Meillerwagen. You have six runners directly to build it, with some parts shared. There are also photo-etch brass components, a small decal sheet, and two lengths of chain.

The finished Tacom trio (below) look excellent, the complexity of the Meillerwagen contrasting nicely with the simple V-2. 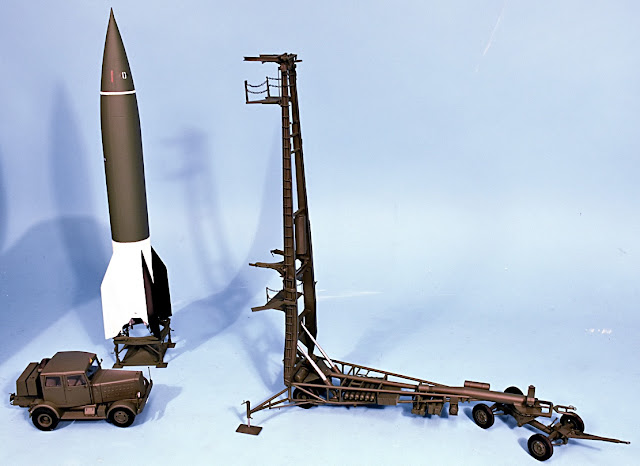 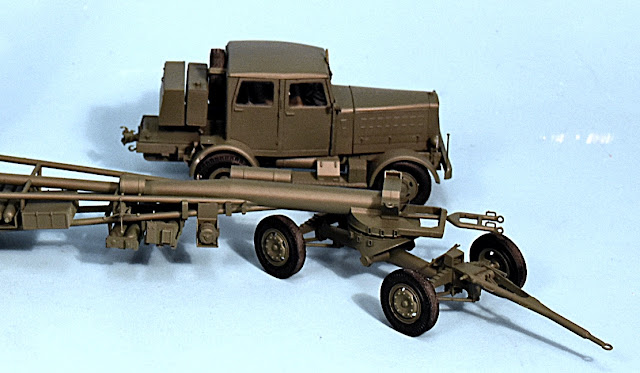 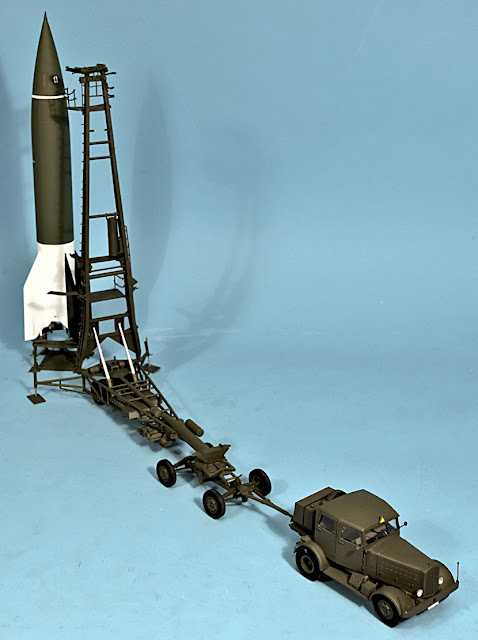 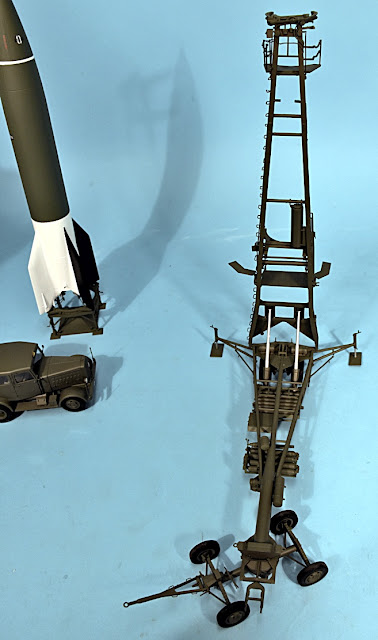 A handsome piece of art (below) decorates the biggish box.

The Meillerwagen does look rather daunting initially, but the instructions - at the beginning, at least - are very clear, and although many of the parts (below) are small and fiddly, they do go together in a logical manner. It is only later on, when there are options to consider, that some of the instructions get slightly hazy. 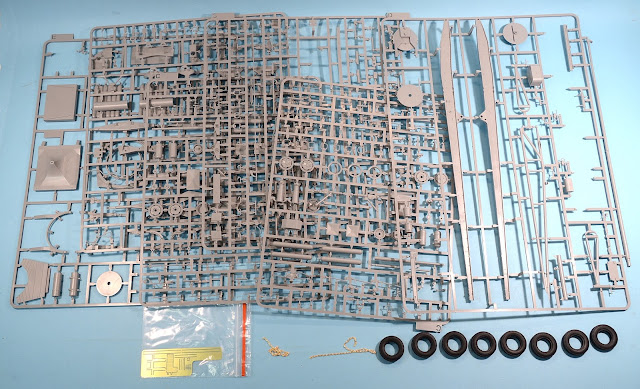 I have a warning for constructors: a decent razor saw is absolutely vital to remove parts from the runners, especially the smallest ones. Even snippers could snap these fragile items, and don’t even think of attempting to twist them off.

The runners are alphabetically numbered. Here, you are mostly using the two C runners, plus D, E, F and G.

The centre-section of the road-going part of the Meillerwagen is assembled first, and although there are a lot of support struts, there are locating holes or pins on all parts, and some of these even have D-shaped locating pins, to ensure that everything is orientated correctly. 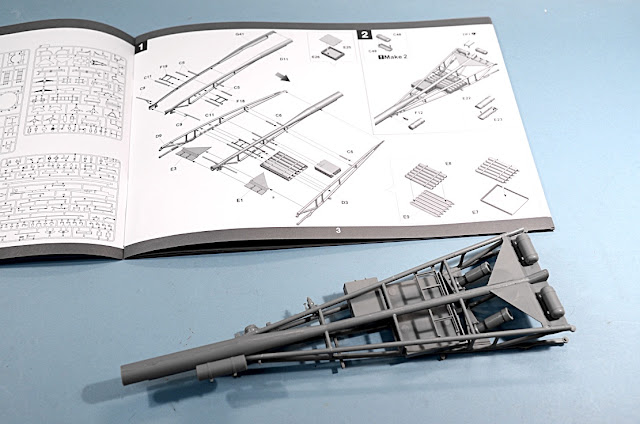 Complex though it is, the Meillerwagen does not allow you to move the V-2 into firing position. You have to decide fairly early on whether you are building the rocket being transported horizontally, or with the launch rail in the vertical position. However, you can delay this decision by building some parts separately, such as the rear support legs, and only make your final choice toward the end.

The front-wheel axles steer and swivel, and all wheels are designed to roll. However, the attachment points are very small, and we are back to the usual reasoning of whether moving wheels on a static model are useful or not.

Some parts are really fragile, such as the ladder that runs up the starboard side of the erector rails. My advice here is that using that razor saw is even more necessary. There is also a ladder section on the port side, but this is moulded as one part. 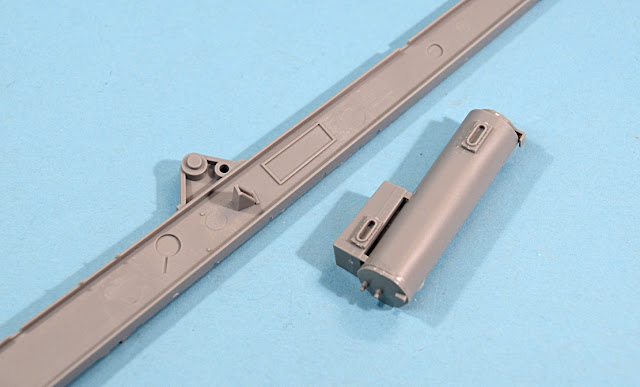 The options end up as being:


The colour of most Meillerwagens was an overall camouflage green, but there are alternative schemes. For this build, I used Humbrol 163 Dark Green over an undercoat of Humbrol 30. The instructions don’t really indicate if the parts F8 and F9, which are protection plates fitted during travel, were removed during launch. Some photos of the real setup show them in place, others show them removed, or perhaps not there in the first place.

However, F8 and F9 slot in place, so are removable if you wish. The same applies to the mast that fits to the left-hand side. This is to support the V-2’s electrical connections when it is on the pad. But the Meillerwagen could be removed from the immediate vicinity for launch, so the mast is normally depicted being positioned by the launch pad. Oddly, this is one omission from this otherwise very detailed kit.

Most of the Meillerwagen has been constructed (below) though I have left the wheels and other modules off, to allow separate painting. 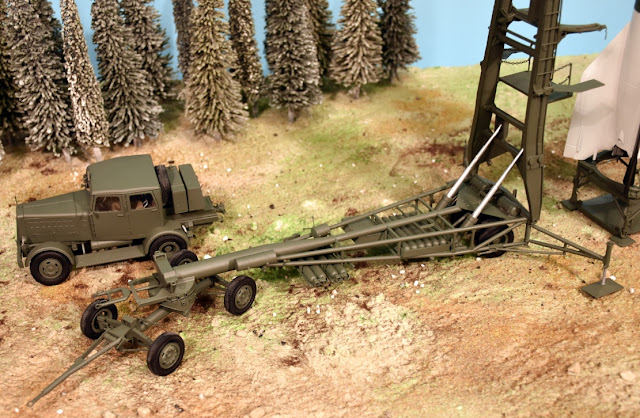 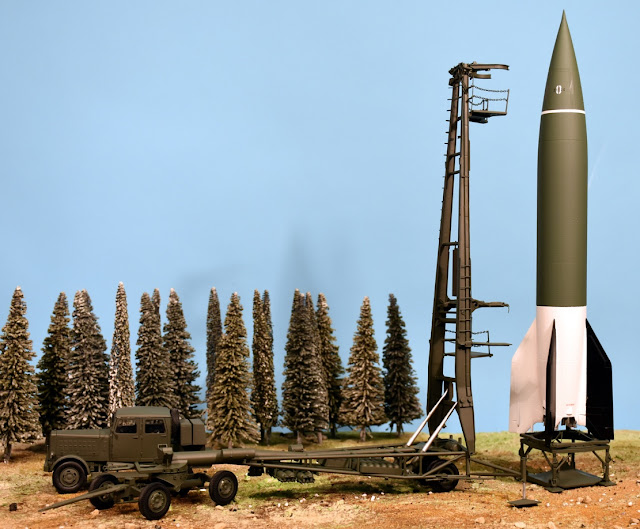 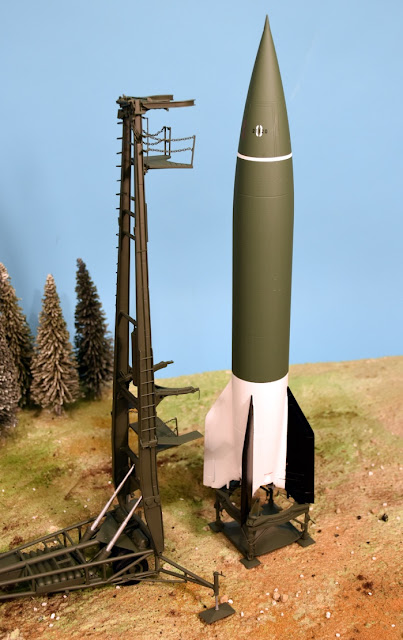 For the pix (below) I chose the black and white markings used for test flights. The pattern is detailed on my recommended V-2 website (bottom). 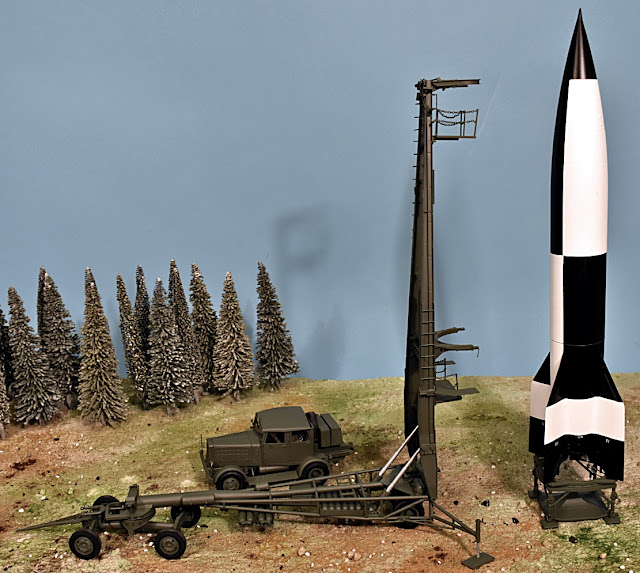 Simple masking off (below) is sufficient for the relatively easy to apply colour scheme. Here, I had already sprayed on the white, and left the masking until it was completely dry. 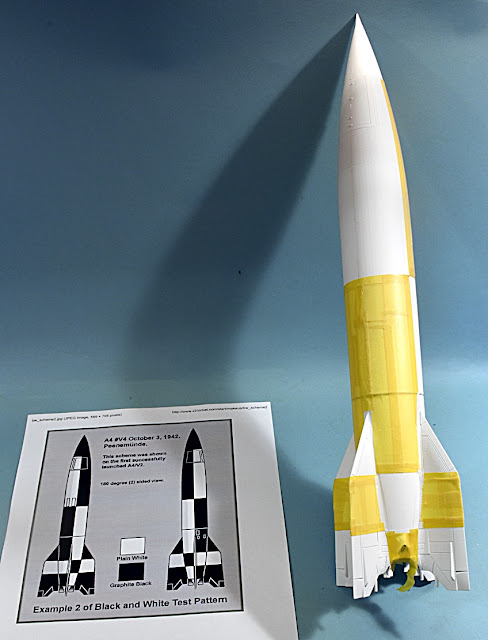 I used satin black spray (below) to complete the marking scheme. 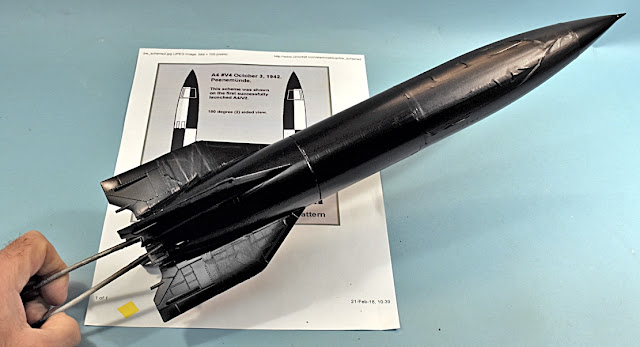 No figures are included with this kit, but there are plenty of suitable ones available. To date though, no kit company has released support equipment such as fuel bowsers for A, B and T-stoff, the command wagon, or the long Magirus ladder used to reach the V-2 nose section. Most of these are available in 1:72 scale, but none so far as injection styrene items in 1:35 scale.

This Tacom kit is the only currently-available injection-styrene 1:35 scale V-2. Dragon did make one, and the same kit was also reboxed and reissued by Revell, but these have been unavailable for some time. The only real alternative is the Accurate Armour resin kit.

These all supplied a launch platform, but none the Meillerwagen, so in 1:35 and in standard injection-styrene, the Tacom release is the only way you will get one.

The only previous 1:35 scale Meillerwagen was made in resin by PSP, which also made associated vehicles and equipment. But these were specialist resin kits, hard to find and expensive. PSP kits are now produced by Scalelink but only a few of the V-2 accessory kits are currently made. Both the V-2 (02075) and the Hanomag (02068) are available as a separate kits from Takom.