IF YOU KNOW YOUR 1950s spacecraft kits, this new Moebius model of the NEV (Nuclear Exploratory Vehicle) might look familiar as a kit that Strombecker produced - except that it isn’t.

Mat Irvine: Although the NEV is based on the same design the space scientist Krafft Ehricke devised when he worked for Convair, it is in fact a totally new kit. The handsome box (header pic) depicts the NEV passing over a cratered moonscape.

Author Adam Johnson used some Ehricke images in his book 2001: The Lost Sciences, The Scientists, Influences and Designs and he developed this particular concept into the new Moebius NEV kit. Let's hope there are more factual-futuristic designs to come in what looks like a growing 'Lost Science' kit series from Moebius.

The NEV is very simple to build, the craft itself consisting of five fuel tanks, a propulsion module and a long boom stretching forward to connect to a habitation crew module. The tanks are identical mouldings to make up five cylinders, with individual parts for the rest. The engine is a NERVA nuclear rocket motor that was proposed around the time Ehricke was doing his designs. As concieved, it propels the craft, and there is circular pipework that connects the tanks to the central propulsion module.

The NEV components (below) laid out to show their simplicity. 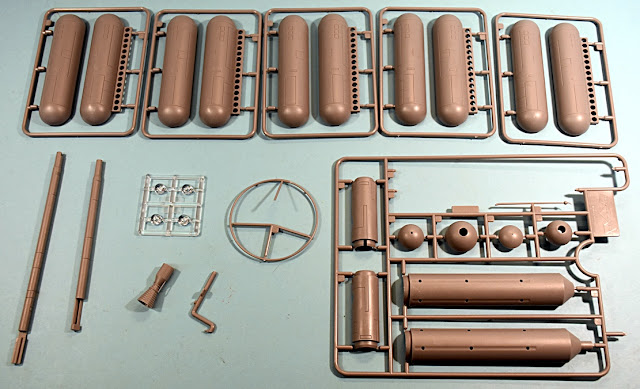 The boom comes in two parts, ending in the crew module, which has a single clear dome. At the front is the communications antenna.

And that is it, apart for the stand, which is the same found in the 2001 Orion and Johnny Quest Dragonfly kits.

Colours? Well, the NEV design is speculative, so they are totally up to you, most likely white, grey, and silver. The included decal sheet provides various markings and panel details. The latter mostly cover the crew module. You can use these, or just use paint, and some of the Convair logos.

For the review kit, I sprayed the whole assembly in Humbrol Matt Black 33, then Aluminium 56, and finally a dusting of Silver 11. Testors also has similar shades in its paint range.

I used brass paint for the rear pipework and engine bell attachment point, then I painted the bell in bright red.

And how does this Moebius newcomer compare to the old Strombecker kit? Superficially it looks much the same, as both share the same design. But the NEV is shorter than the Strombecker kit by a good 70 mm (2.5in), even though the Strombecker is reckoned to be a larger 1:96 scale. The size difference is primarily in the boom, which did always make the earlier kit prone to sagging!

The Strombecker kit also featured an interior for the crew module, viewable via a slide-off cabin section. Inside, you could find two crew members, and a semblance of what the interior of an interplanetary-type spaceship might look like. With the Moebius kit, you only get the observation dome.

One thing the old and new kits do have in common is that Strombecker and now Moebius provide some technical specifications, a feature often found in the kits of the 1950s and 1960s for its educational value.

This went out of fashion in later years, one main reason being that companies found they had to provide instructions in multiple languages. However, Moebius deals only in English, so allows for extra details in the instruction leaflet.

I used cutters (below, orange) and sharp blades to trim components. I removed the gates, where the styrene flows into the part cavity itself. The ten tank halves have six such attachments each, here the three on one side of one half are marked with the cutter and scalpels. 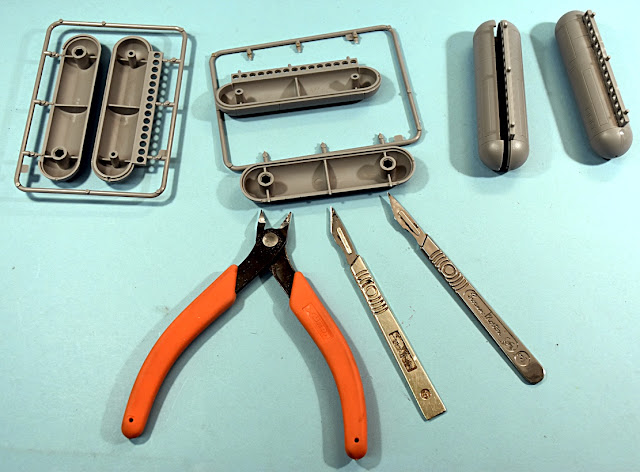 The five tank assemblies (below). 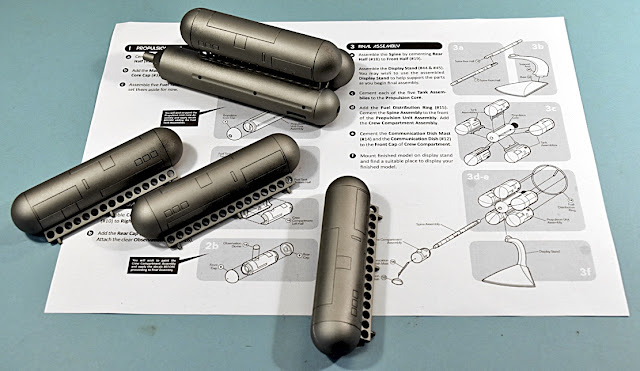 I test-fitted the components before painting (below). The eagled-eyed among you may note the model sits on a Moebius Orion stand, but the NEV stand uses the same design. 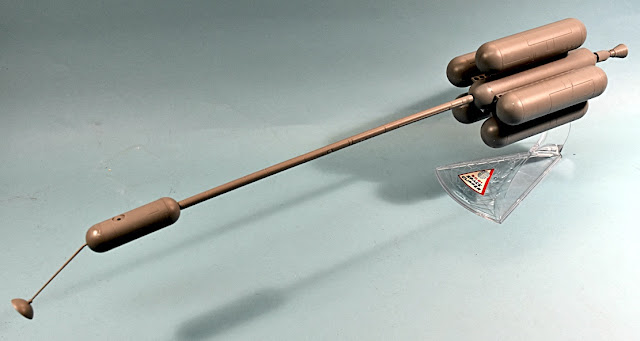 The main structure (below) was sprayed silver. The instruction leaflet makes interesting reading, and the decals are neatly printed.

The completed NEV (below). 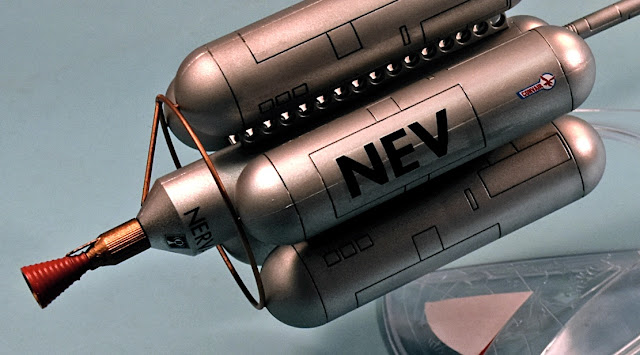 The decal sheet (below) has two silver panels that can be applied round the crew module. 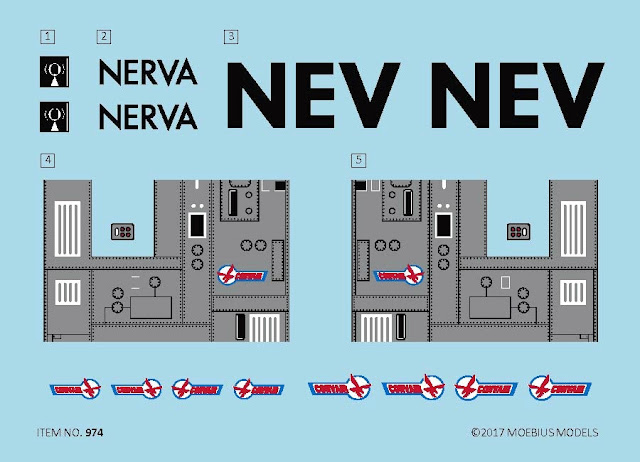 The crew module (below) looks convincing.

The 1:144 scale Moebius NEV (below, silver) compared to the 1:96 scale Strombecker Convair Manned Nuclear Interplanetary Vehicle. The booms do tend to sag, even on the shorter Moebius NEV, though you could use a length of same-diameter aluminium tube to avoid the problem.

The box painting (below) seen here before the design and typographical elements have been applied.

Dr Krafft Ehricke (below) with five of his Convair designs. The photo appears on the back page of the Moebius instructions.

The Space Shuttlecraft (bottom left) was made as a kit by Revell. The Strombecker Convair Manned Observational Satellite Vehicle (top right) has most recently been released by Glencoe Models. A lunar version of this kit (top left, bottom right) was also released by Strombecker.

The launch rocket that Ehricke is holding has not - so far - been made in model kit form. 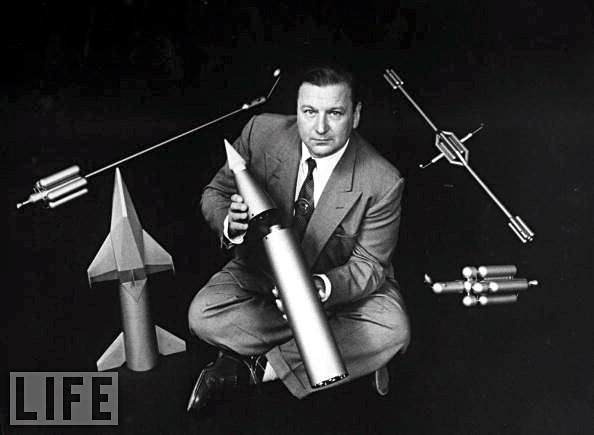 Thanks to Moebius for the review kit. Details kindly supplied by Adam Johnson and Bob Plant, the Moebius Art Director.