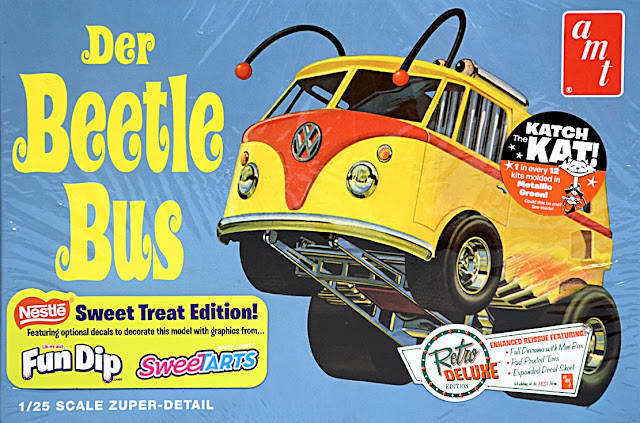 DER BEETLE BUS IS A REBORN AMT show rod from the 1970s, and this 1:25 scale kit is the first reissue.

Given that Der Beetle Bus didn’t exist for real, and that the assembled model measures only just over four inches long, the kit is fairly comprehensive. It has a centrally mounted Chrysler-type V8 engine that (conceptually at least) drives the rear wheels, which are shod with giant tyres. Long injector stacks pop through the roof, and there's an ‘eyeball’ collector scoop.

Der Beetle Bus has front and rear traction bars, and wheelie bars at the rear. The model’s interior has seats and driving controls at the front, and a giant fuel tank at the back.

With this new release, you get new-tool tyres, a choice of transparent parts in clear and blue, an enlarged decal sheet, and a card display base.

Der Beetle Bus is another AMT ‘Katch the Kat’ kit, where one model in every 12 is moulded in a special colour. In this case, the shade is a translucent metalflake green. If you get one of these, it’s best to paint the inside only (if at all) otherwise you will completely lose the metalflake effect.

Parts layout (below). Note the two sets of transparencies, and the metalflake green finish. 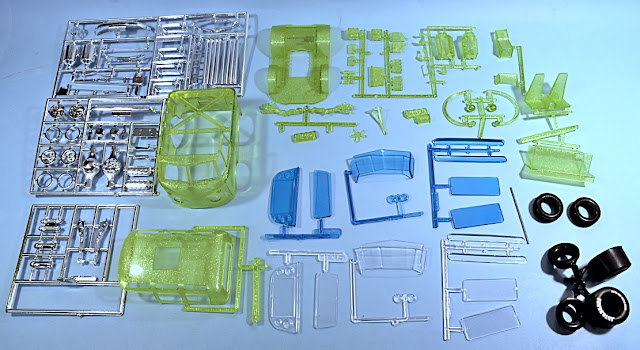 All the paper parts (below). The kit includes instructions, decals, card diorama, and the usual mini-box to cut out. 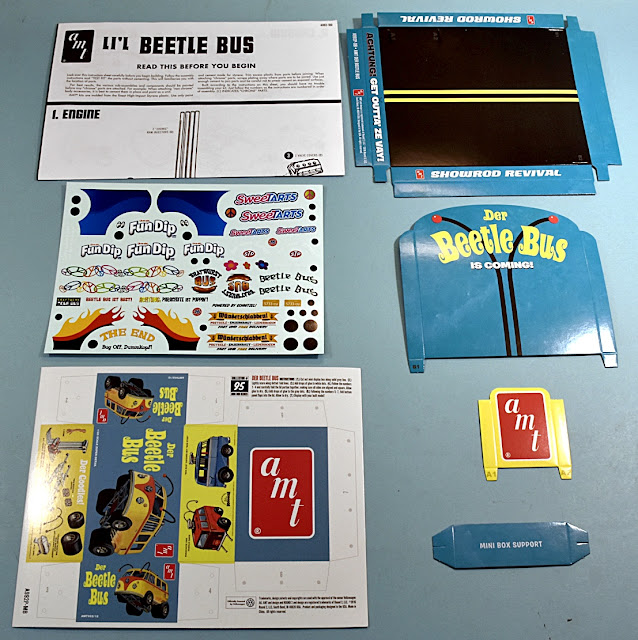 If you have a ‘Katch the Kat’ kit, you also get a certificate (below). This does indicate it is in metallic green, but the effect is definitely more of a metalflake.

Initial painting and chassis construction (below). Wheels, tyres, and seats have yet to be fitted. 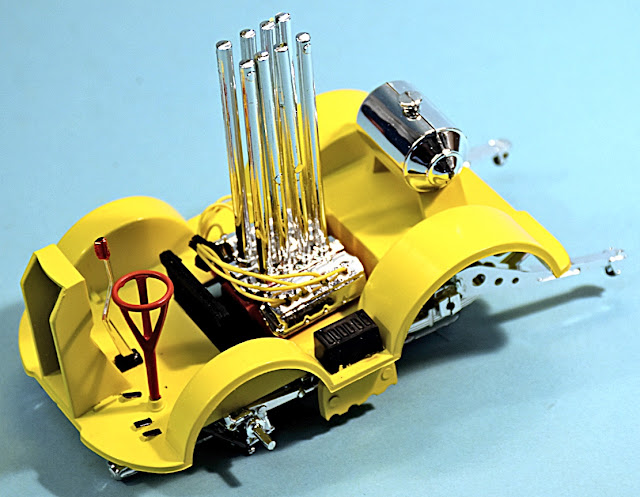 Completed chassis (below) with wheels and tyres, seats and air scoop in place. The scoop had to be left loose in order to to get the body on! 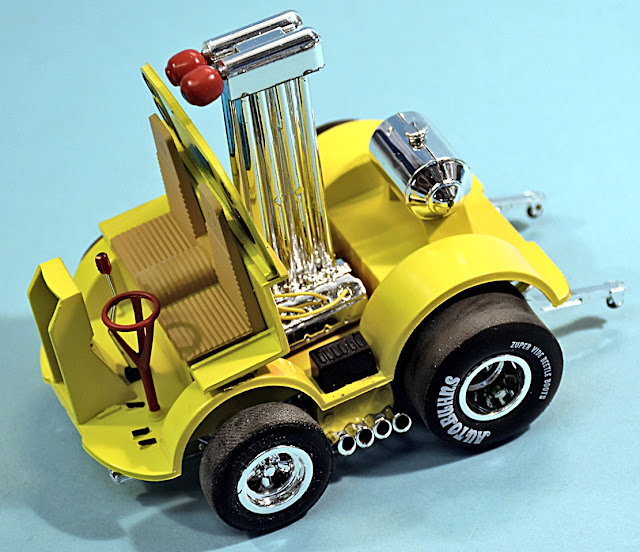 Chassis underside (below). The wheelie bars are in place at right, but the wheels and eight exhaust pipes have yet to be fitted. 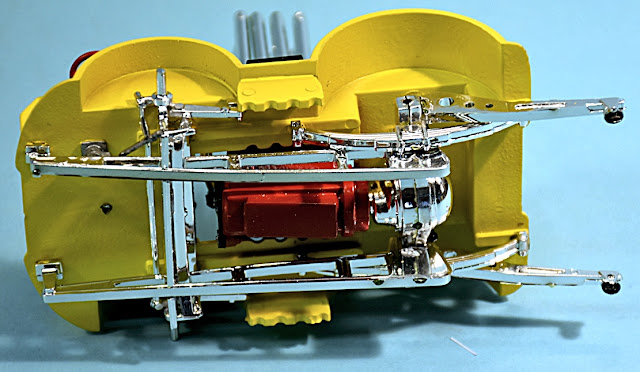 If you go the box-art route as a painting guide, the body (below) is mostly yellow, with red trim. Here, I am applying flexible masking tape, so the red can be sprayed over. 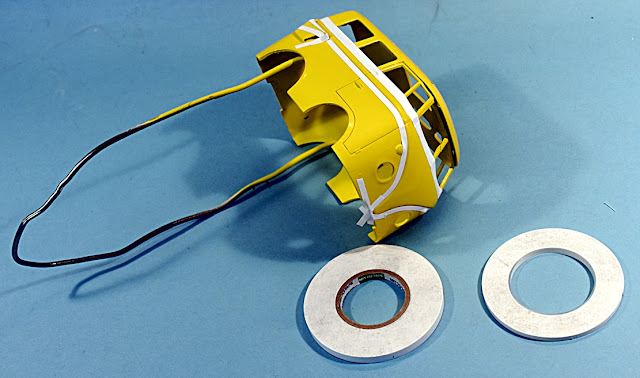 With the Katch kit, I sprayed the body insides with blue (below) allowing the metallic sparkles to stand out. 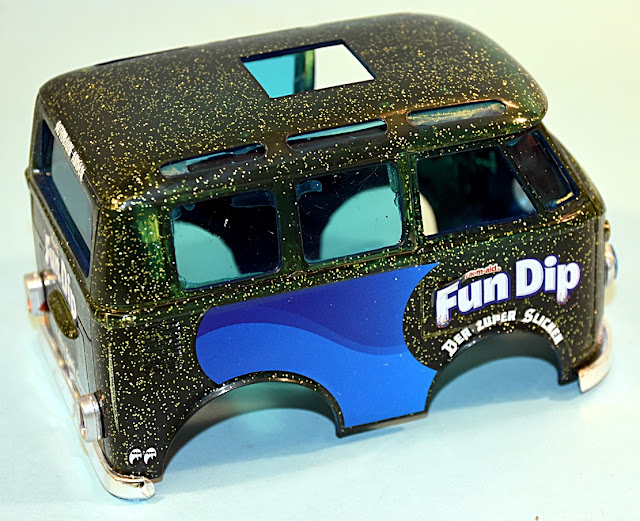 The yellow and red version (below) on the new diorama base. I salvaged this body from an original kit. 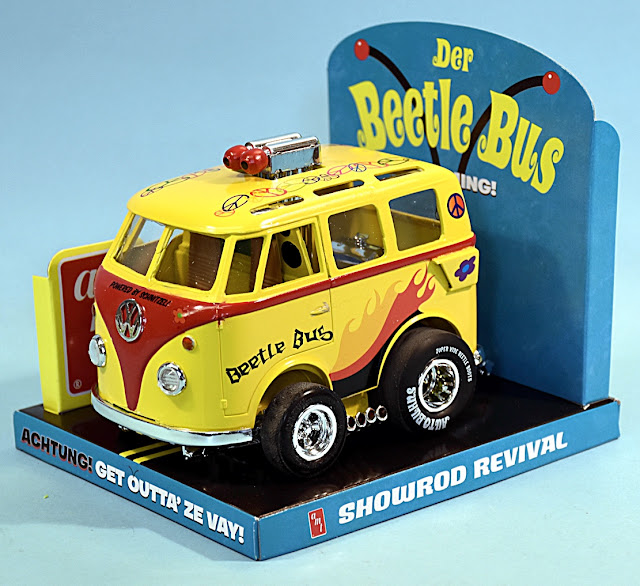 An original like the one (below) is usually termed a ‘junker’ but can often be salvaged with some work, as I did with the body. But most of the chassis parts were not salvageable as they appear to have been assembled with two-part resin. 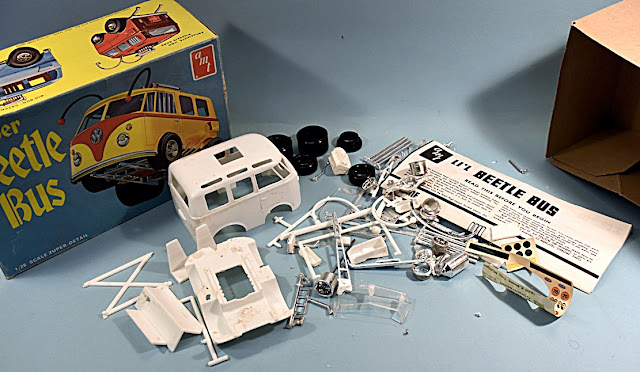 The metalflake green version (below) was built on the same chassis. 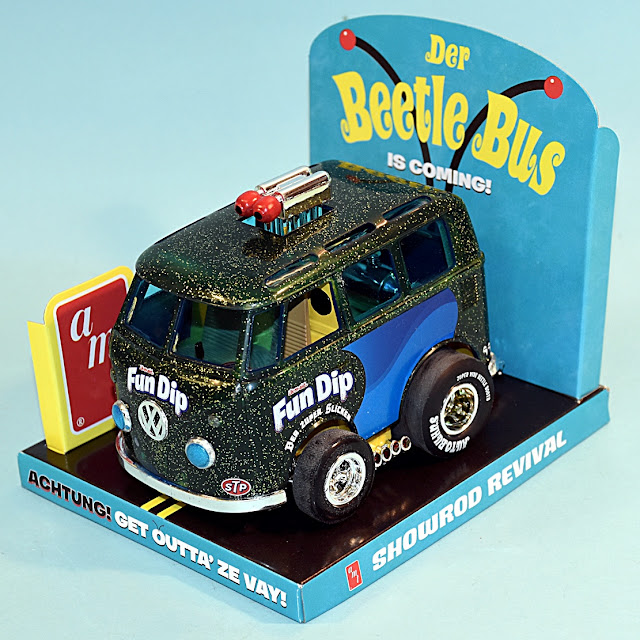 The old (upper below) and new (bottom) boxes compared. The labels are on the shrink wrap, so when it is removed, the boxes are nearly identical. 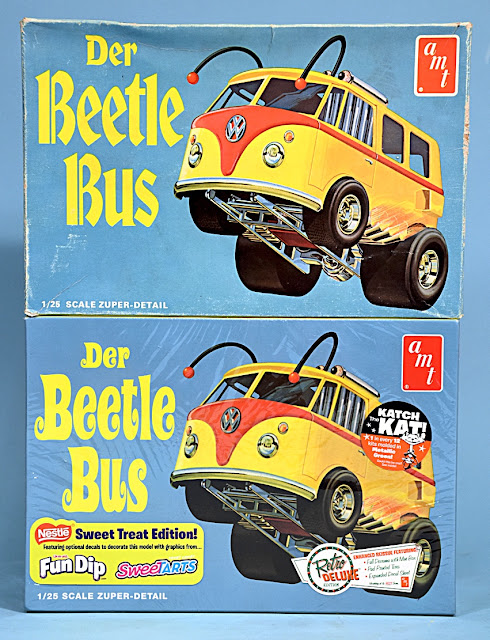 One of the main side panels (below) is also the same. 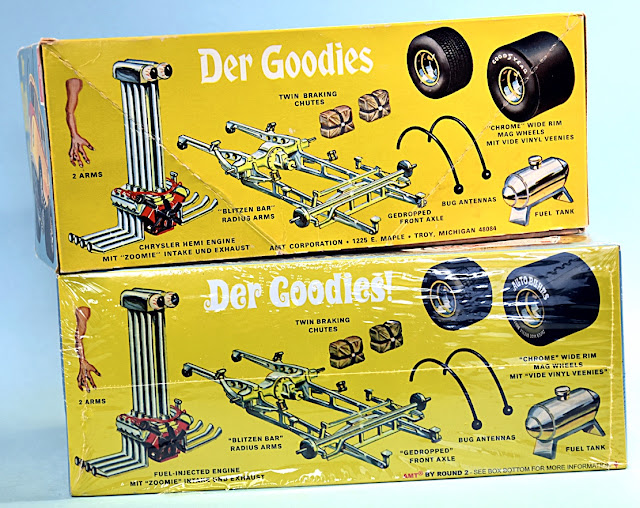 The other side panel (below) is a little different, as John Bogosian is given a credit on the new box. 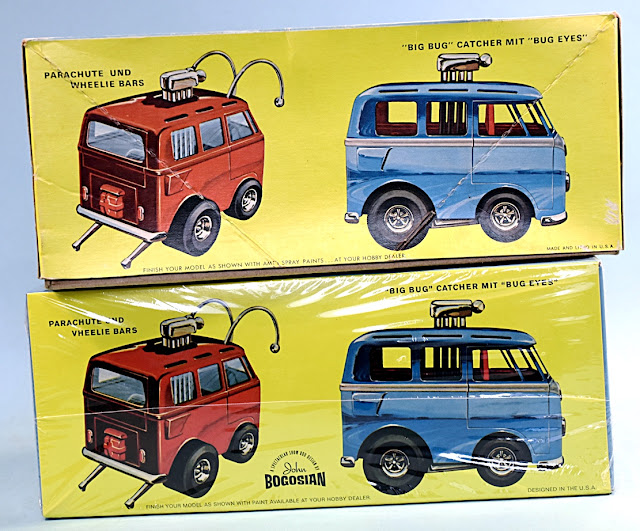 Summation
Small but fun, with a bonus if you get a Katch the Kat kit.

SMN note: Der Beetle Bus is referred to as L’il Beetle Bus on the instruction leaflet, reflecting others in the show cars series: L'il Gasser, L'il Gypsy Wagon, L'il Stogie, L'il Yellow. We’re not sure why Der Beetle Bus doesn't appear as well. We're quite taken with the 'Sweet Treat Edition!' extra decals, though whether you wish to use them is up to you. Likewise the 'bug eyes' components.