A CRAPPY COMMIE CAR PERHAPS, BUT AT LEAST IT PASSED THE MOOSE TEST 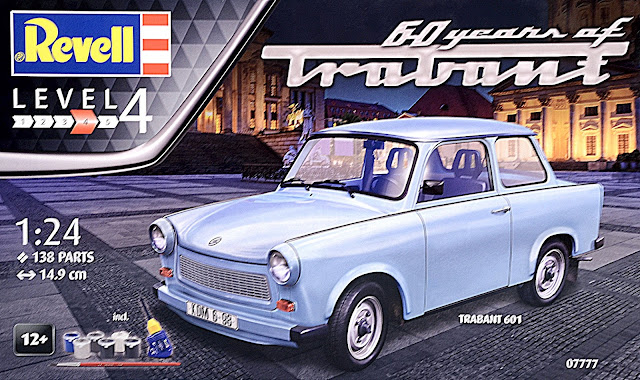 A FEW MONTHS BACK, REVELL REISSUED a 1:24 scale kit of the Trabant 601S, to celebrate 60 years since the boxy little East German car was first built, in 1957.


Mat Irvine: The Revell kit enables you to build a stock Trabant, and also a version called the Safari, which operates guided tours around Berlin. A new decal sheet features the zebra-stripe markings that adorn the exterior of the Safari. They certainly stand out in Berlin’s busy traffic.

Revell has actually made two versions of the Trabant. The first was a simplified kit without vinyl tyres, but did include a large roof rack. Revell retooled the kit in far more detail, though the rack option was deleted. The kit we show here is a reissue of this latter kit. The box back (below) has useful information and pix of the car. 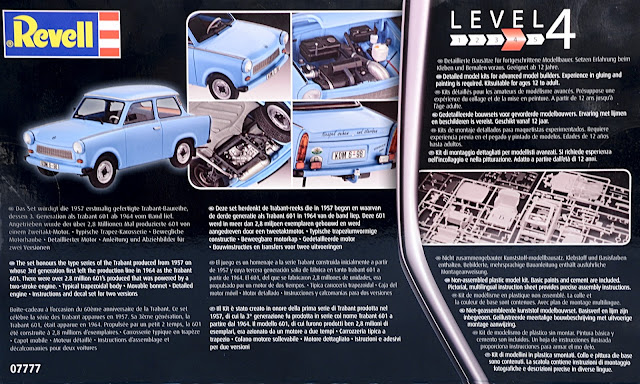 Official Revell pictures (below) show a decent level of detail, including the engine compartment, plenty of decals, and chassis underpan. 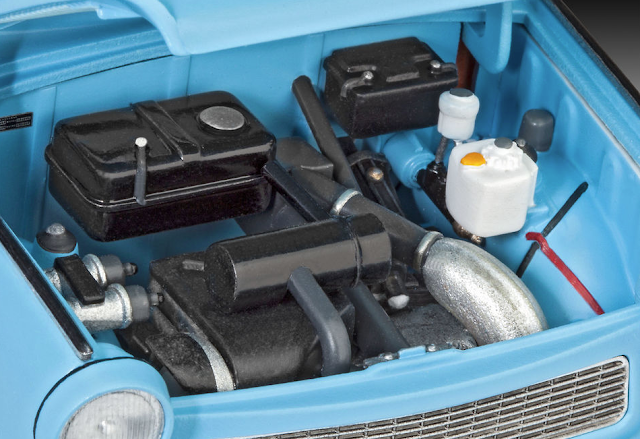 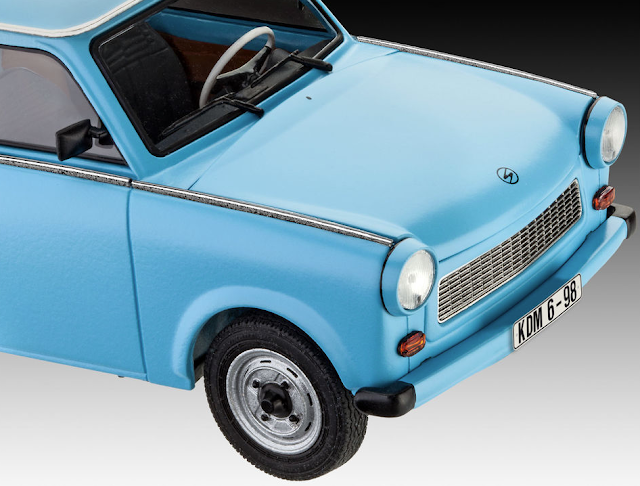 The Revell Trabant’s rear (below) is graced with German words that translate as ‘See Naples and Die’ meaning that the fabled city has to be on your bucket list. For the Trabant, it’s a sign from the owner that his boxy Communist-car could actually make it as far as southern Italy. 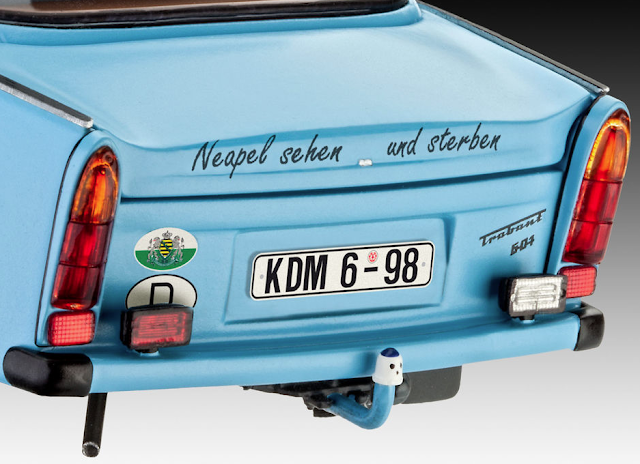 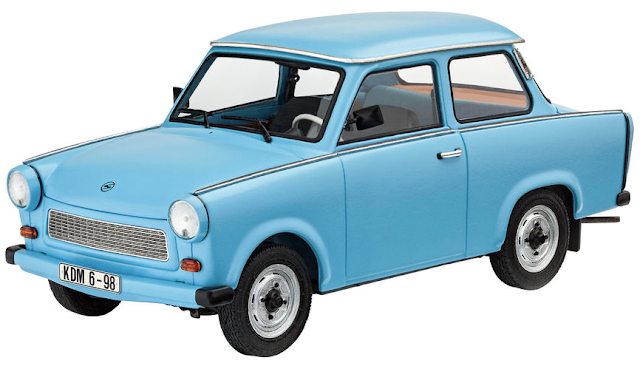 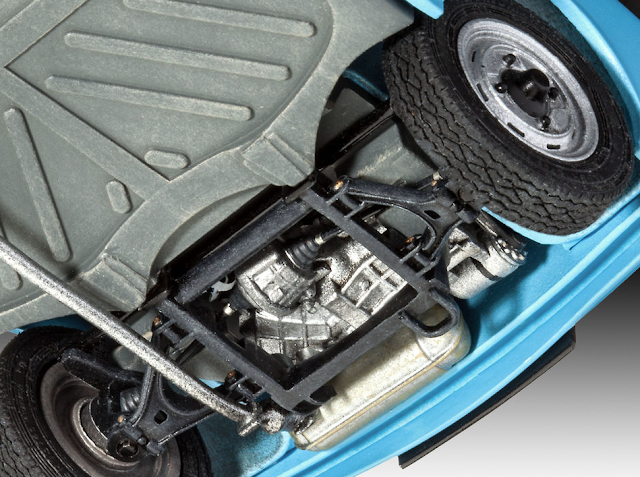 The quickest way to determine a first or second Revell release is to see if the kit has vinyl tyres and more parts (below). The earlier version had styrene tyres moulded with the wheels. 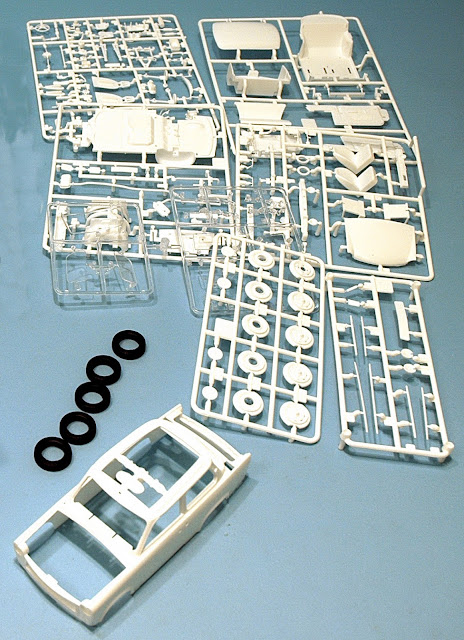 The retooled kit comes with (below) half a dozen pots of paint, a brush, and a liquid cement applicator. 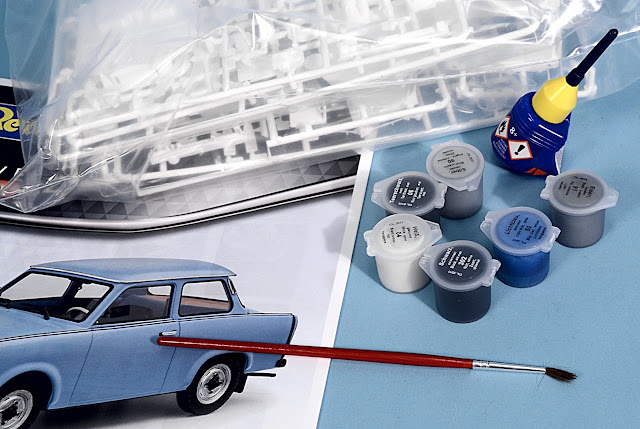 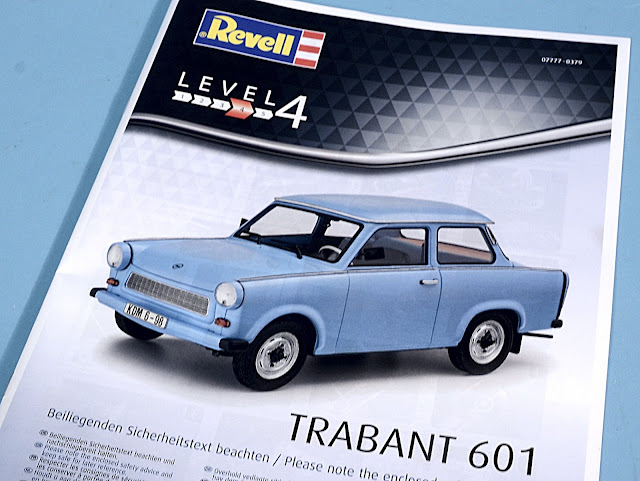 Instruction booklet (above, below) is comprehensive and in full colour. 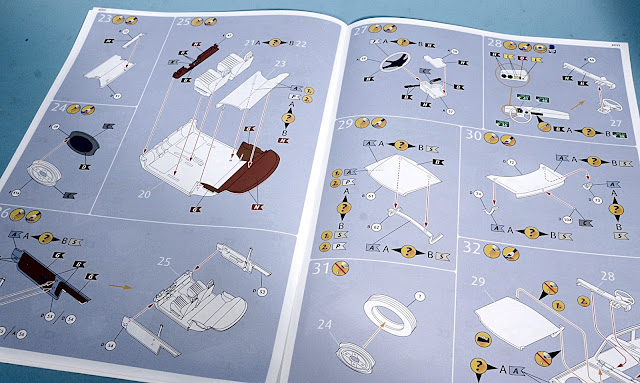 The decal sheet (below) includes stripes for the Berlin Trabant Safari tour car. 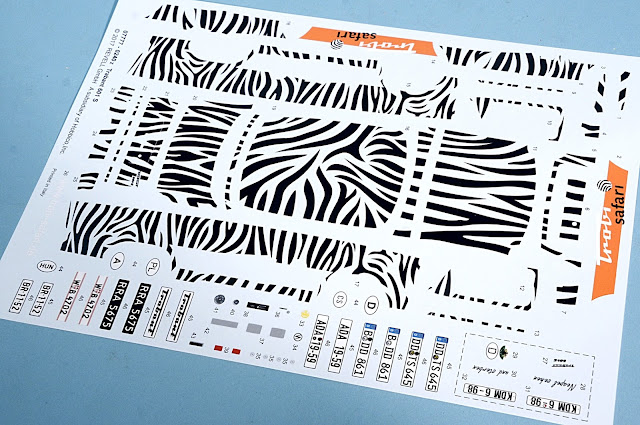 I finished my assembled Revell Trabant (below) in one of the real thing's stock colours, a rather sickly shade of lime green. 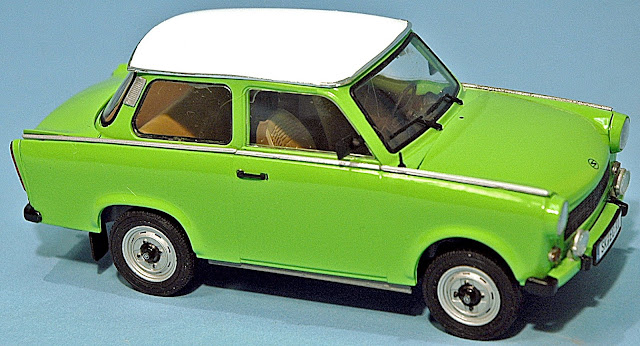 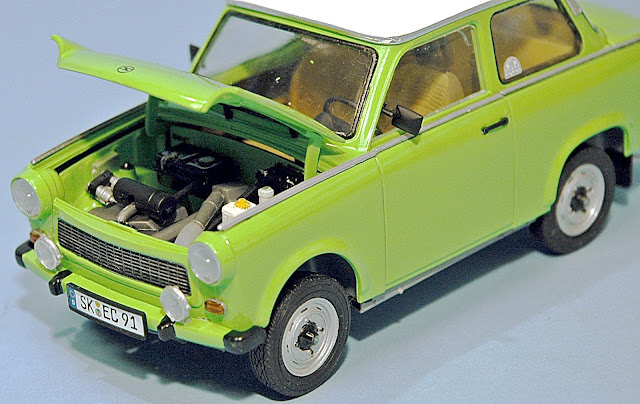 About the Trabant
In the 1960s, Britain had the Mini, France the 2CV, Italy the Fiat 500, and West Germany the VW Beetle. They were all great cars in their day, setting many technical standards, winning rallies, and still exist in both original and modern forms.

At the same time, what was then East Germany produced the Trabant. To put it mildly, this was not competitive with the other four cars, though to be fair the Trabant did have a transverse engine, front-wheel drive, and independent suspension. However, it was powered by an old DKW-based two-stroke engine and bodywork that was usually (though inaccurately) described as being made from ’compressed cardboard.’ But although East Germans gazed enviously at what their West German counterparts were driving (such as BMWs, Mercedes and Audis) the Trabant was the only way most could get around.

So when the Berlin Wall came down in 1989, many East Germans crossed to the West, putt-putting their way in their Trabants. But these were often abandoned after the original owners changed to BMWs, Mercedes and Audis, maybe with the odd Jaguar or Range Rover thrown in.

But eventually the Trabant became an icon in its own right, and many have since been salvaged and given a new lease of life. Some of these operate in Berlin in ‘Trabi Safari’ guise, which takes tourists on trips around the city.

A Cold War display at the truly excellent RAF Museum Cosford (below) features an East German Trabant (foreground) with a British Mini (left) and a West German Beetle (right). 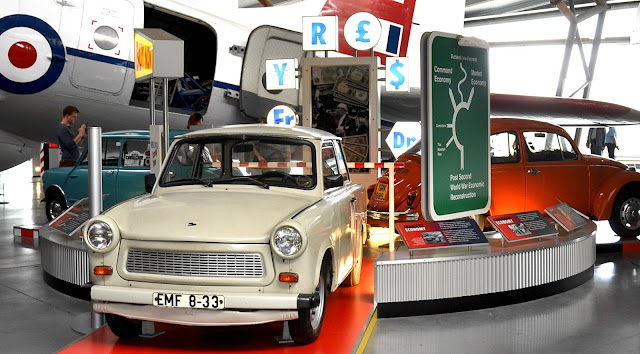 Recycled cardboard?
The Trabi’s body was often dismissed as being made of recycled cardboard. Actually, it was made from a material called Duroplast, a hard plastic produced as a mix of recycled cotton waste and phenol resins. It was a rust-free material, which lasted for many years.

If you are keen to make the Revell Trabant, there are plenty of variations to choose for an interesting display model (below). The Polizei car would look good in a cop car collection, while the trailer chop would be interesting almost anywhere you showed it. 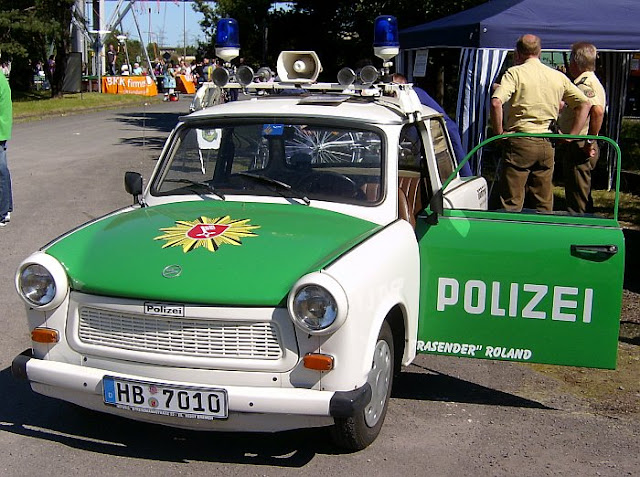 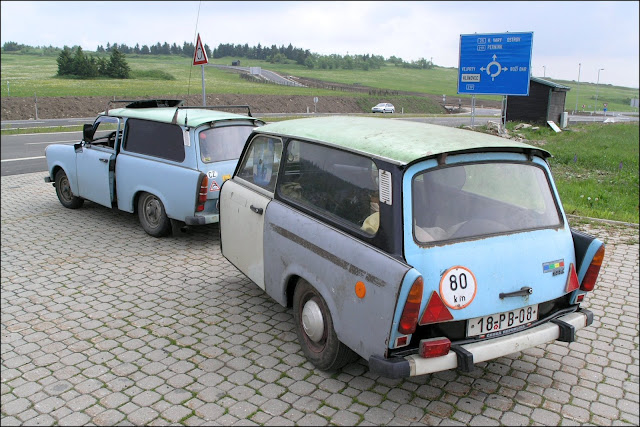 From silver screen to the moose test
The Trabant starred in its own movie, Go Trabi Go, a version also kitted by Revell. The car's nickname was spelled with a single ‘b’, but it appears that both ‘Trabi’ or ‘Trabbi’ are equally correct.

Finally, the Trabant has at least one claim to fame over Mercedes-Benz. The 1997 launch of the Mercedes A-Class car was blighted when it failed the infamous moose (or elk) test, which assesses vehicle control at speed when avoiding a large object on the road, such as a moose. The A-Class (below) rolled over disastrously in mid-test - but the little Trabi passed the same test with flying colours!

Click here to see the Trabant  601S ‘60 Years of Trabant’ at Revell. It’s in the interesting young- old-timer range, which includes such classics as the VW Beetle and Bus, Citroen 2CV, and a Chevrolet Corvette Roadster.

SMN note: One day, the Trabi might return in updated form. This Trabant nT concept car (below) was shown around the auto show circuit a few years ago, to generally good reviews. 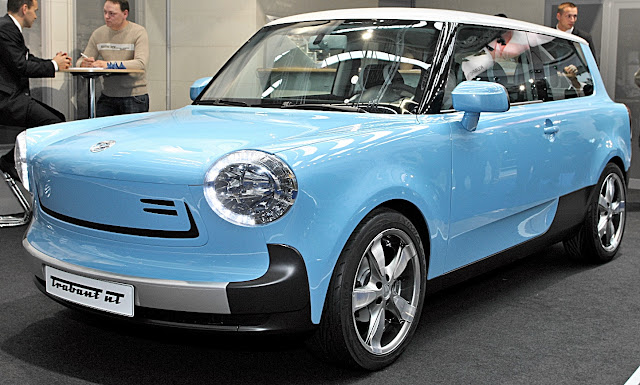