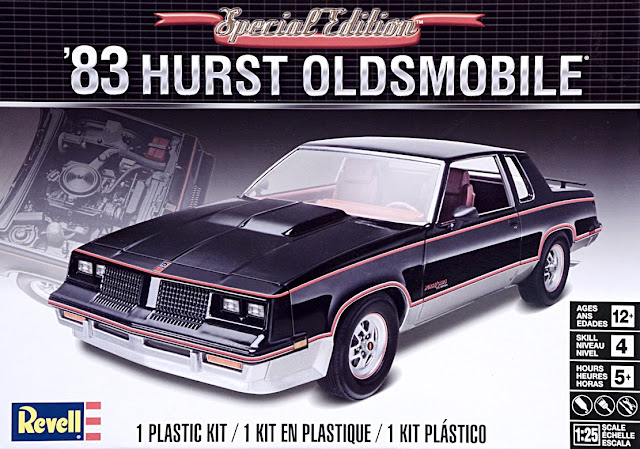 IT'S BACK TO 1983 with this 1:25 scale Revell Special Edition kit of the Hurst Oldsmobile.


Mat Irvine: This kit, or a variation of it, has been on Revell’s ‘to do’ list for some years. Initially the plan wasn’t for a ’83, it was for a stock ’87 Cutlass, and originally intended as a metal-bodied kit. There were a few test-shots done in styrene, but that kit was never commercially produced. Now we have what is effect a brand-new kit of the ’83.

The kit has a separate engine block and full chassis detail. Although the interior tub is one-piece (as were the old ‘annual’ kits), the side door panels are separate parts.

The box (below) has useful closeup photos, useful for reference during your build. 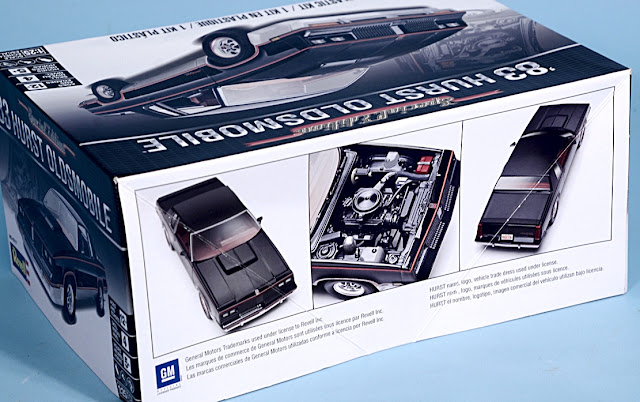 The Hurst 1983 models were available only in gloss black over silver. For the subsequent and final year,1984, the scheme was reversed. For the kit, I finished the model in Testors Classic Black. After it was thoroughly dry, I masked the sides and applied Testors Diamond Dust  lacquer. For the interior I used Humbrol Crimson, topped with matt varnish to lose the gloss.

The glass fits (slightly unusually) from the outside, and I found that it was best to use a clear modelling clear adhesive. Liquid cement will run, or cloud the clear styrene.

Revell supplies a comprehensive decal sheet with the dividing pin stripes that go between the main black and silver colours. It is important to ensure these are the correct way up, as it is easy to get them upside-down. From the top, it goes silver-red-black. Note also that the position guide for the decals at the very front is not that clear. But  decal 38 goes on the upper join of the grille to hood, while the two stripes 18R are for the lower area, and go round the bumper.

Oldsmobile and Hurst
Considering the Oldsmobile General Motors division was generally known for basic middle-of-the-road cars, there were still some surprises in store for keen drivers. It was the Olds division that first issued the front-drive Toronado, (AMT and MPC made annual kits) and from the late 1960s, Oldsmobile had a relationship with Hurst, known for its performance engineering.

For the drag strip there was the twin-engined Hurst Hairy Olds (kitted by Monogram) and for the road, the Hurst Olds. This was based on the mid-bodied rear-drive Cutlass, with only a limited number produced each year. In 1983, a grand total of 3001 were made. 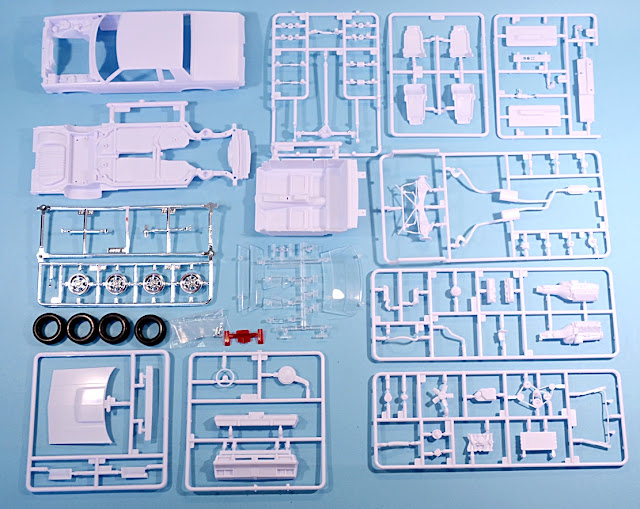 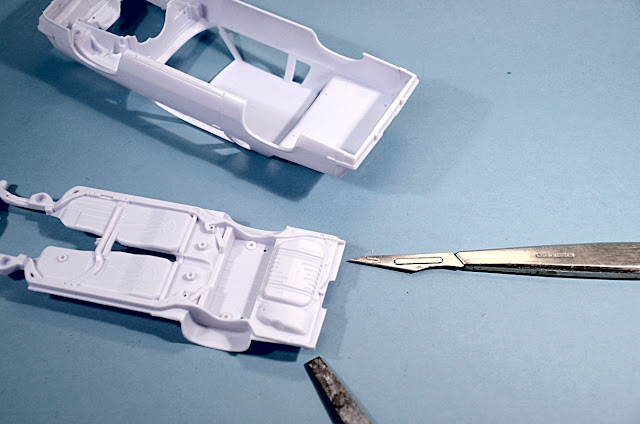 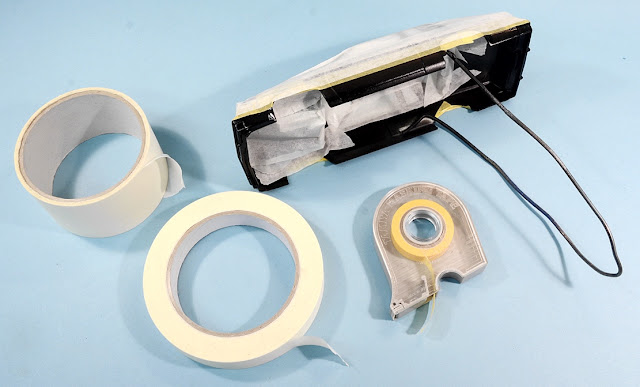 I used Tamiya masking tape (above, below) to mask the black paint, ready for silver to follow. The tape is backed up with more general masking tape in two thicknesses. Remember to mask the interior of the body as well, otherwise the paint will creep onto the outside surface though the openings – yes, it will! 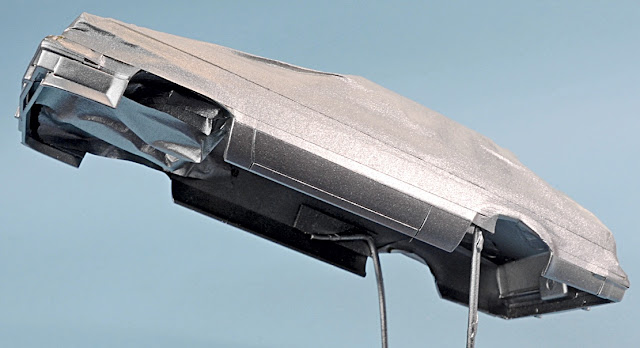 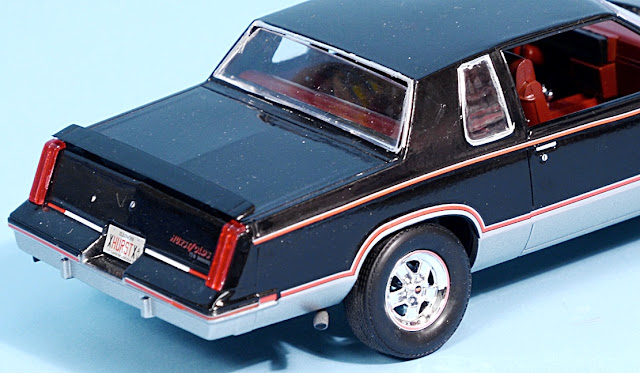 I made a simple diorama setting (below) for the Olds. The base was built using a piece of slate, broken up to form crazy paving, then pressed into a layer of wet DIY filler and allowed to dry. The bushes are model rail items. They would be much larger – in effect, ‘trees’ – in 00/H0 scale, but plants and trees adapt to other scales more easily than vehicles. 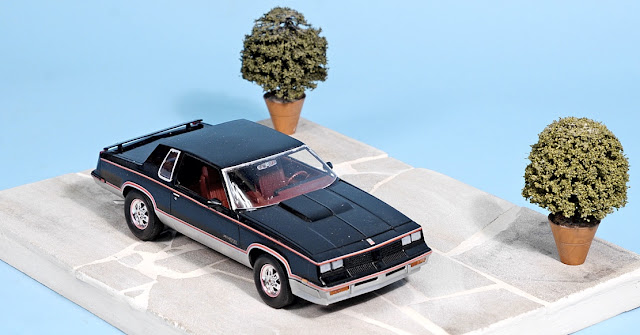 SMN note: Here’s what auto expert Thomas deMauro of Hemmings Daily has to say about the car.

“…one of the last iterations of a traditional GM mid-sized V-8 rear-wheel drive muscle car with a performance-tuned (at least by 1983 standards) four-barrel engine, Hurst-shifted transmission, 3.73-geared rear that could be had with limited-slip, heavy-duty suspension, power front disc brakes and bucket seats with console. It even had a comprehensive gauge package with its only failing being a speedometer that only read to 85 MPH.

“Though the engine was still a bit short on displacement and power compared to its forebears, with just 180-net hp from its 307 cubic inches, it was right on par with its contemporaries and other specifications revealed that the muscle car formula had advanced a bit mechanically over the years.

“In fact, the 1983 Hurst/Olds and other performance-based G-bodies of the era possessed some features that owners of vintage muscle cars would begin to install in their rides in the 1980s and 1990s (some even today) in an effort to improve performance and efficiency.

“For instance, GM’s THM200-4R overdrive automatic transmission that the G-bodies (and some other platforms) used and the larger THM700-R4 that the F-body Firebird and Camaro (and some other platforms) employed in the 1980s and early 1990s would soon become popular swaps to provide not only a lower first gear for more dig on launch, but also the overdrive fourth gear to keep revs down on the highway. Some muscle car owners would even retain the lockup-style torque converter to squeeze maximum efficiency out of their transplanted transmissions.”