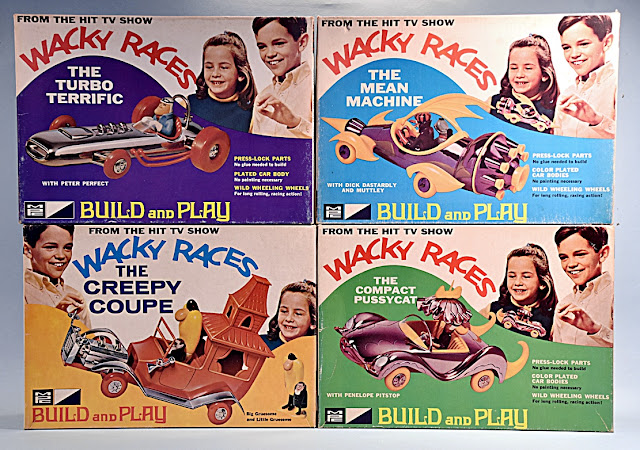 MAT IRVINE GOES GO BACK TO THE WACKY PAST with four Build and Play MPC kits.


Mat Irvine: The kits involved are hardly new, but I suspect many SMN readers will have not have seen them before. And even if you have, I doubt if they will have been in this form.

Way back in the heady days of the 1970s, MPC issued four kits of vehicles from the 1968-9 cartoon series Wacky Races. Kits of cartoon subjects are hardly unknown, but for some reason these particular four have become some of the most sought-after model car kits ever made, making silly prices on online auction sites - even for badly-built kits with missing parts!

I never got these kits first time around, and missed a good few auctions, even for ‘bits’! However, I was recently handed all four by old friend Andy Yanchus in New York with the comment, “You’re the car guy’ and “I’ll never finish them…”  So I acquired all four kits in one go!

The comment regarding ‘… never finish them’ was useful. If you have a rare kit worth silly money, it can actually help if it someone has started to build it. Buyers who collect rather than build want absolutely mint and boxed examples. These, although complete, were not mint as Andy has started the included figures and had assembled the wheels.

Four cars (below) that I built in the paint schemes of the original TV series. Shown (below, left to right) the Creepy Coupe with standing figures of Big and Little Gruesome. Dick Dasterdly’s Mean Machine, and, yes, you get Muttley as well. Penelope Pitstop’s Compact Pussycat, and Peter Perfect’s Turbo Terrific. 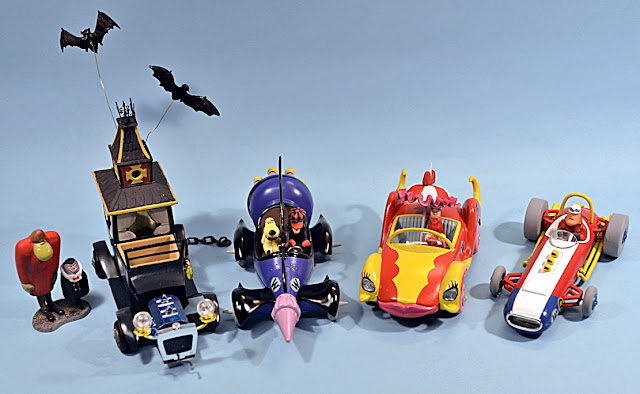 The Creepy Coupe box and built model (below). The kit came with red bodywork and chrome-plated fenders. 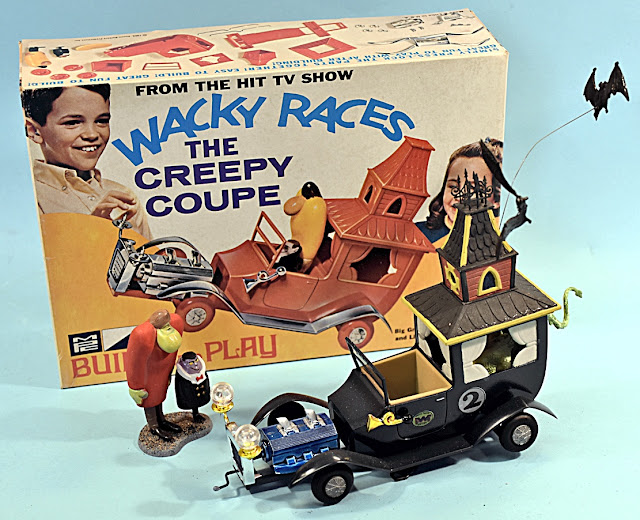 I added accessories to the Creepy Coupe. These included (below) railings around the top of the turret, a pair of bats, plus the tail of a dragon. This was the only one of the four kit where I used the original decals. 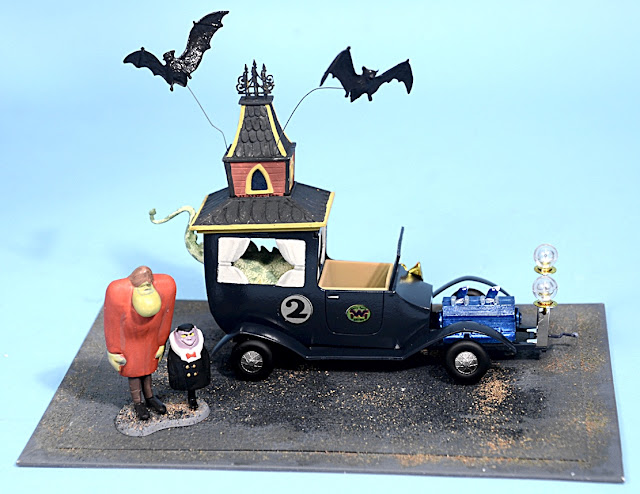 If you know your Wacky Races, you may recall that the car numbering went up to ten, but – like the 0-11 amplifier volume controls in the 1984 movie This is Spinal Tap – there were actually 11 Wacky Racers, as there was also a number 00.

Of the four MPC Wacky Racers I received, number 00 is the Mean Machine of Dick Dasterdly and his canine companion, Muttley. The other three are Peter Perfect’s Turbo Terrific 09,  Penelope Pitstop’s Compact Pussycat 05 and (my favourite) the Creepy Coupe 02, with Big and Little Gruesome.

MPC intended the kits for their play value. To this end they were pre-coloured, with many parts chromed in bright shades and could be made to race. However, the kit colours didn’t match those of the cartoons (though these occasionally varied), and Andy’s only stipulation with his gift was that they be built to match the cartoons, not the way MPC intended. Which was fine by me.

First to go was most of the chrome plating, the only remnants being the blue-tinted engine block for the Creepy Coupe, and the radiator shell. The Creepy Coupe also had the most additions to what you got in the kit. I added railings around the battlements, which came from photo-etch parts, and a chain to trail from the back. A couple of bats (on thin wires) were added from the Aurora/Polar Lights Monster Customizing Sets, and the dragon from the Monogram Circus Wagon, though only its tail stuck out of the rear window.

Most conversion work however was with the Compact Pussycat, as the retaining pin mouldings on the upper surfaces were removed, after which filling and sanding the resulting holes did take a while.


The Turbo Terrific took some masking, as the chrome on the bodywork was replaced with a patriotic red, white and blue finish. Peter Perfect, although (presumably) American, came over in many ways as an archetypal British racing driver, usually described a ‘Gentleman Racer’. Of course, ‘red, white and blue’ works for both nations – the British Union Flag, and the United States Stars and Stripes.

Frankly, the most straightforward build was the Mean Machine, and it took a bit of effort to source suitable paint colours. These included PlastiKote enamels, which are not immediately thought of as model paints, but have some very useful colours.

The Compact Pussycat (below) box and completed model. One parts runner has purple plating, and I placed Penelope Pitstop in the driving seat.

Some of the decals in the kits could be used. After all these years they still worked after a fashion, but some had to be made using Photoshop, decal-making paper and a laser printer, which is how I created the Pussycat's number 5 number. 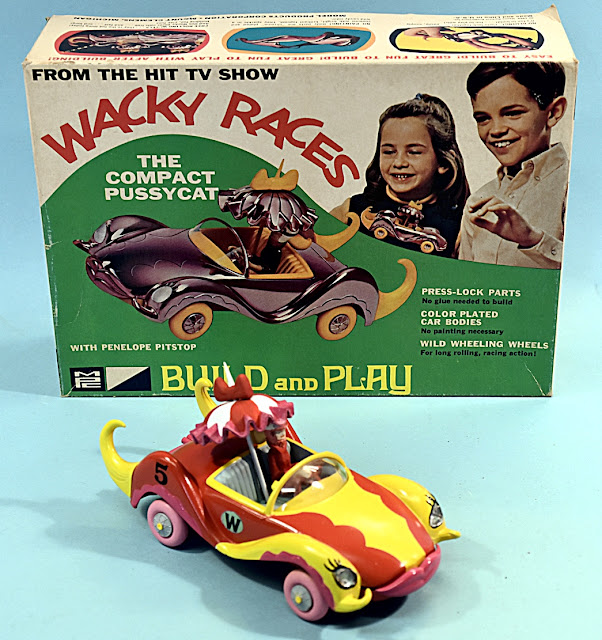 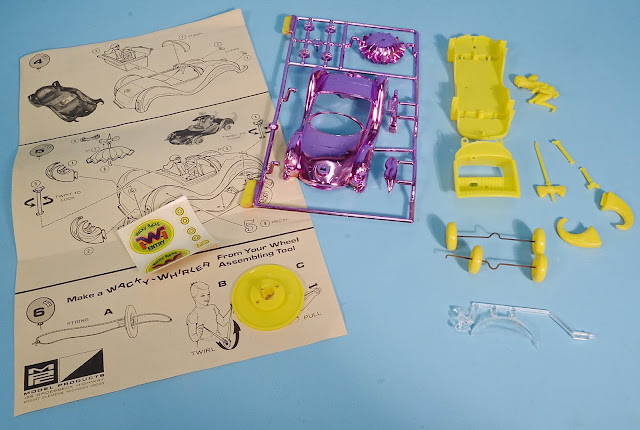 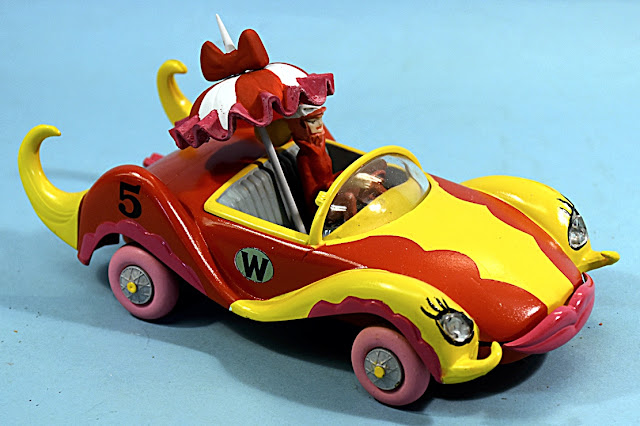 The Mean Machine (below) has seated figures of Dick Dasterdly and Muttley. I used PlastiKote paints for the lilac nose and purple bodywork. 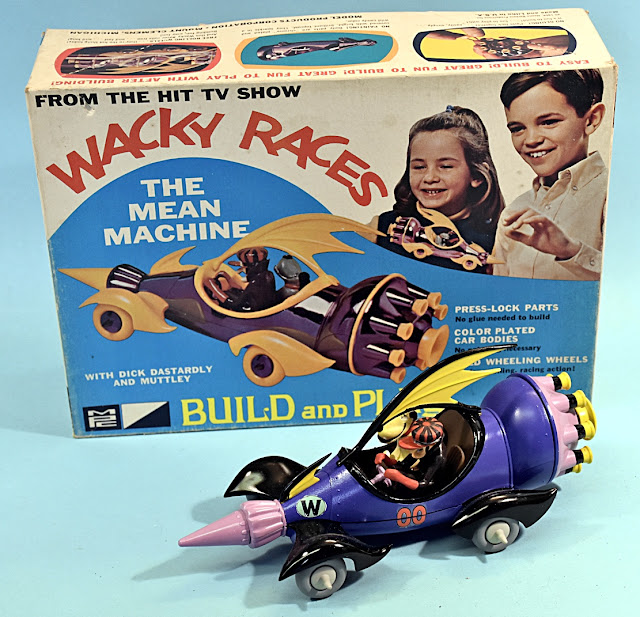 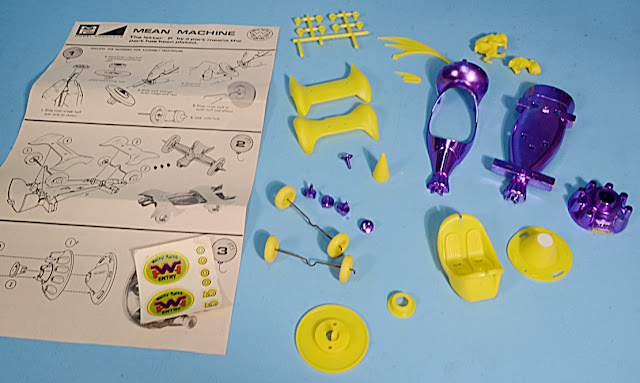 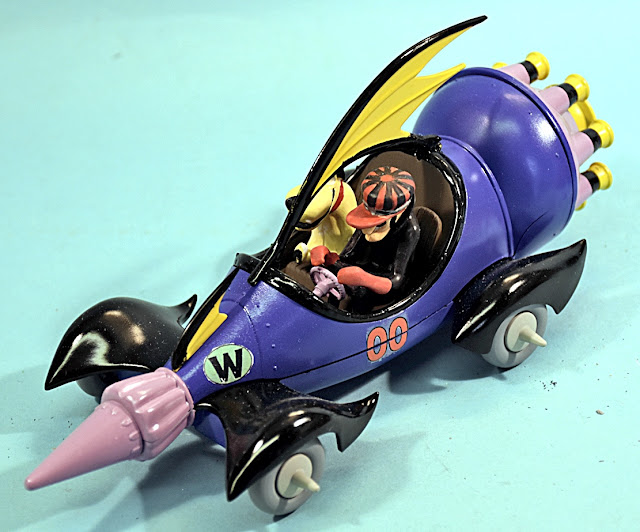 The Turbo Terriffic (below) came with completely chrome body, though all of this was lost when I painted the car in the cartoon finish of patriotic red, white and blue. 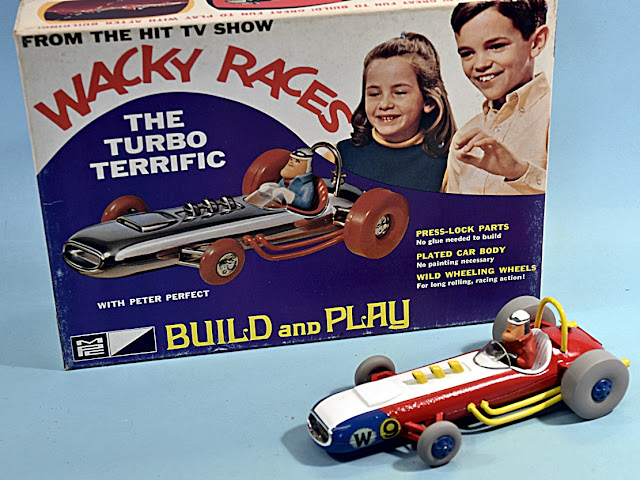 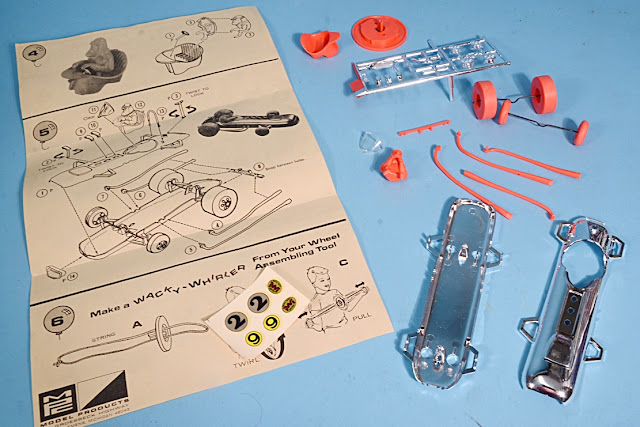 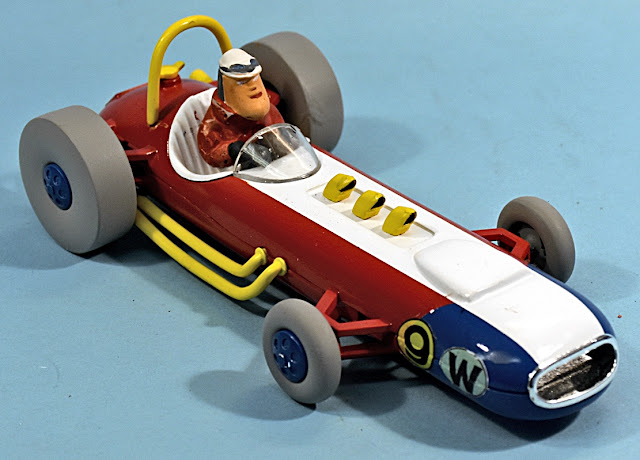 The Goodwood Festival of Speed, held annually in the UK, has been home to full-size Wacky Race cars, such as (below) the Creepy Coupe and Turbo Terrific. All 11 vehicles have been built. 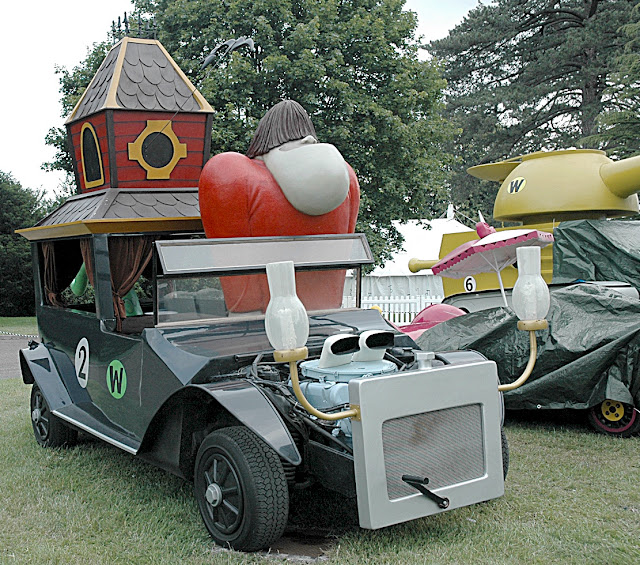 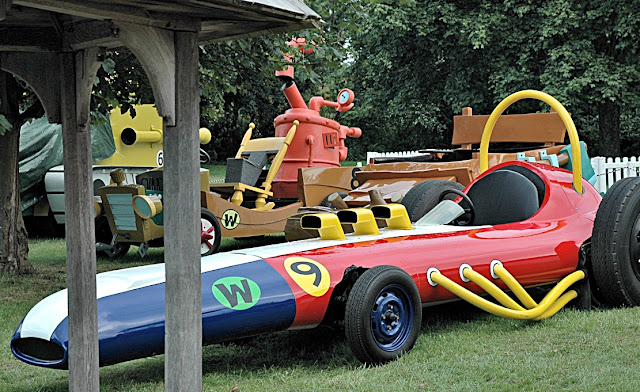 Six Wacky Races cars (below) were originally proposed as Aurora kits, but they only got as far as one-off prototype acetate models. From the Andy Yanchus Collection 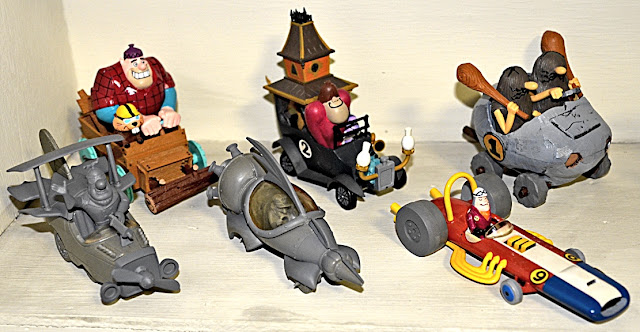 Note: Here are the other seven Wacky Race cars.


Many thanks to Andy Yanchus, without whose generosity these Wacky Race cars would not be here.