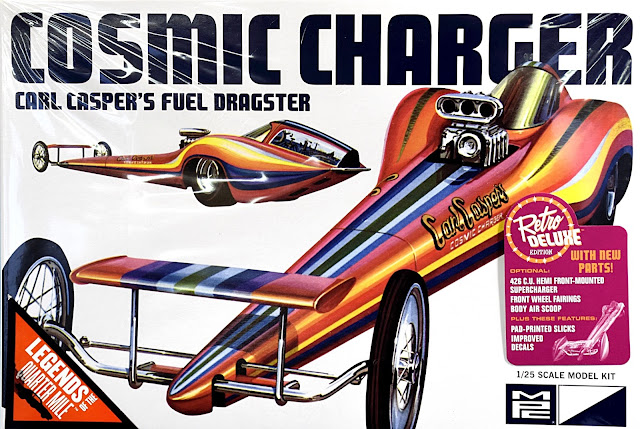 DRAGSTERS ARE BUILT TO do just one thing, and that’s to cover the quarter-mile in the lowest elapsed time (ET). But there’s no reason why they can’t look good as well, and that’s what auto customiser Carl Casper did with his Cosmic Charger fuel dragster.


Mat Irvine: This 1:25 scale kit originated with the original MPC company in 1972, so is now 46 years old. Casper's original Cosmic Charger was built with a top-mounted blower, and exposed motorcycle wheels at the front. Later, the engine received a front-mounted blower for even more streamlining, and the front wheels had streamlined covers to reflect the rest of the design. The newly-reissued MPC kit includes these later parts as extras, and there's also a new decal sheet that reflects paint-scheme changes.

The Cosmic Charger is basically a simple kit as there are not that many parts, but it is a bit fiddly in places. You have to decide whether you are going to build the engine block with a top or front mounted blower right at the start, though arguably you can leave the decision with the front wheels to the end, and only then install either set. If you opt for the front blower, some slight modifications may have to be done to the frame to allow the engine to sit correctly. The fuel feed from the front tank definitely needs to be shortened.

One point with the front-mounted blower, even more with the top version, is that if the bodywork is cemented in place, you won’t see any of the engine, except from underneath. However, if the bodywork is left loose, the panels can be removed and you don’t have to hide all your work.

The decals need a lot of care, as they cover virtually all the bodywork. If you leave the panels loose, you will have to cut and apply the decals to their relevant sections separately. For this, you will almost certainly require solvent to ‘stretch and shrink’ the decals so they will sit flat.

Check model accessory stores for such products, the best known being Micro Set and Micro Sol. An online supplier for these is modelling tools run by SMN colleague, Paul Fitzmaurice.

The Retro Deluxe label (below) is stuck on the outside of the box's protective shrink-wrap. It extols the new features, including the streamlined fairings, front blower, and new tyres. 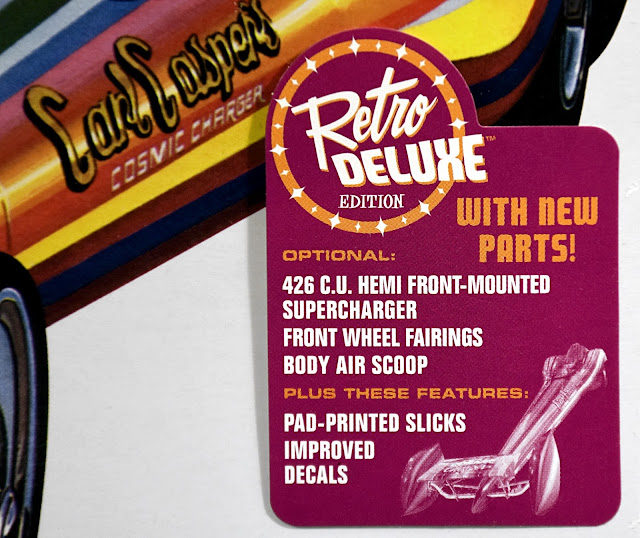 Parts layout (below) shows a cleanly moulded set of components. 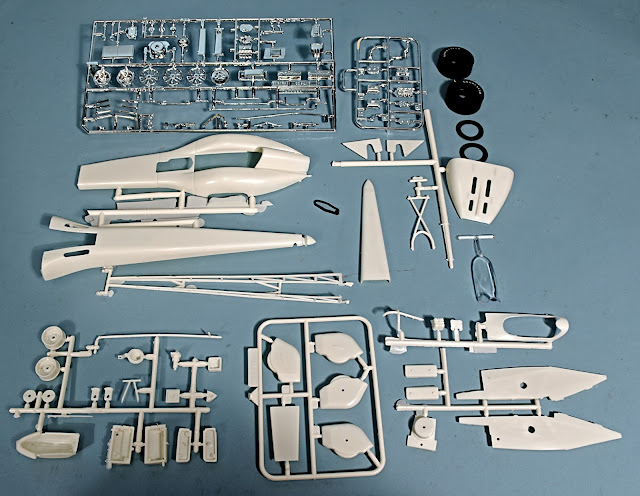 The paperwork (below) includes instructions, decals, booklet and ‘mini-box’ to assemble. 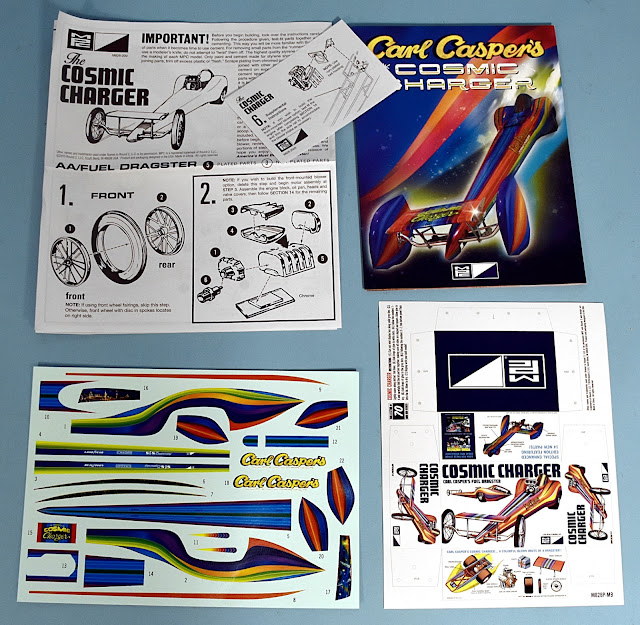 Completed model (below) with the streamlined rear body section lifted off. 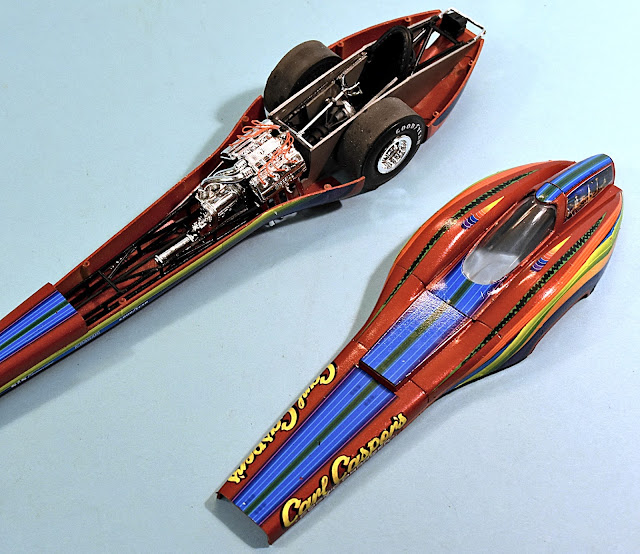 Closeup of the engine with front-mounted blower fitted (below) and wiring added. The magneto (at rear) had to be reduced in height to fit under the bodywork. 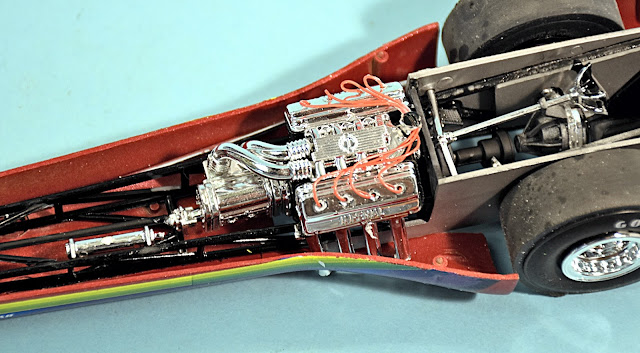 Cosmic Charger (below) with bodywork in place. Without cement, some panels don’t fit precisely, so take care. 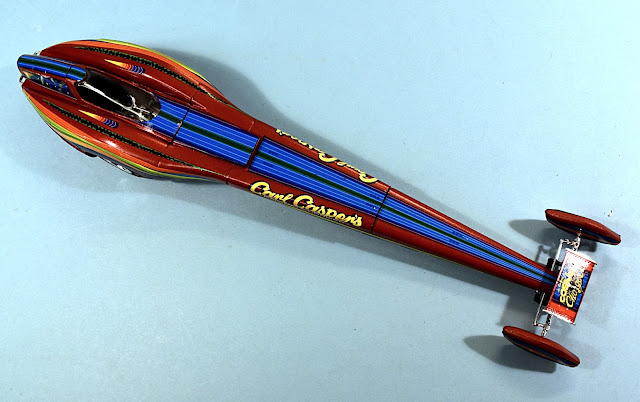 The Cosmic Charger box includes a booklet (below) that shows the real thing in its glory days. 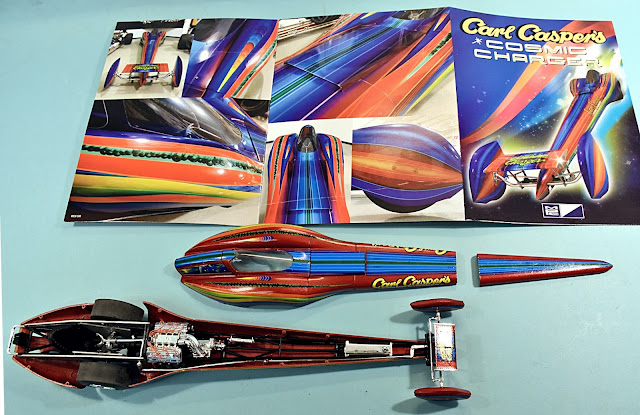 The alternative motorcycle front wheels and tyres (below). 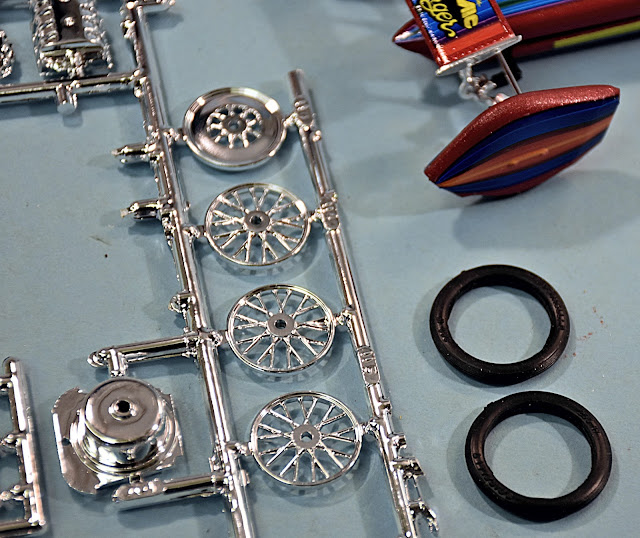