HAN'S SPEEDER FROM THE MOVIE 'SOLO: A STAR WARS STORY' 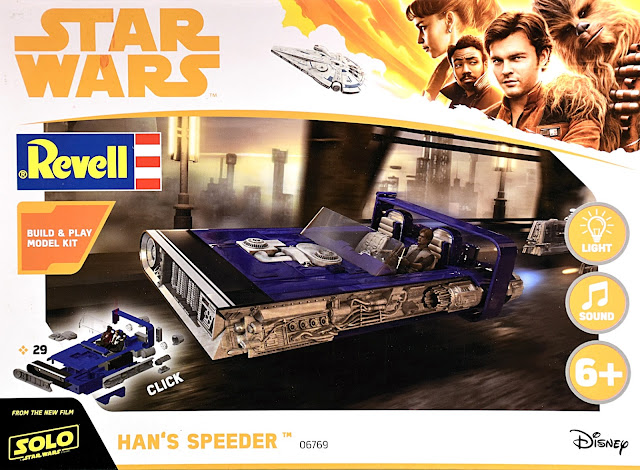 THE STAR WARS MERCHANDISE MACHINE continues to be a massive generator of spacecraft models and kits. Han’s Speeder is a Revell 1:28 scale miniature of the vehicle seen in the 2018 Star Wars release Solo: A Star Wars Story.


Mat Irvine: This kit is from Revell-Germany, and, as with most R-G Star Wars productions, belongs to the simpler end of the modelling business. However, even junior or beginner kits can look really convincing when tackled by a more experienced modeller.

The subject of this new kit is described as a ‘Mobquet M-68 landspeeder’ that was acquired by Han Solo ‘under circumstances he doesn’t care to explain…’ The M-68 is a science-fiction subject, but it’s hardly a spaceship, so can really be considered as a car first or foremost – OK, it flies or hovers, but it’s still a car. Although not produced in a conventional car scale such as 1:24/25 or 1:32, the M-68 is pretty close, at 1:28 scale.

Revell has made this a pre-coloured snap-together ‘Build and Play’ kit, and includes the toy-like features of illuminated engine exhausts and a sound chip. However, you can treat it like a conventional glue kit, with a big plus in that it’s an excellent subject for weathering. Indeed, one advantage of a snap kit is that you can indeed snap sections together, paint them, then disassemble to fit other components.

Revell has moulded the main sections in a dark metallic blue, with a metallic black nose section. Engines and general mechanical bits are a mix of metallic colours. The interior is dark grey and black, and a clear windshield is included. I added Bare-Metal Foil to the windshield frame, as I would with a conventional automobile kit.

I snapped together the blue upper and lower body halves, together with some other parts, and painted the resulting module with Testors Arctic Blue metallic. The black nose could be left off, but I masked and sprayed it with Humbrol Metallic Black. With the various bits painted, the kit could be re-assembled, and this time using cement for a permanent assembly is a matter of choice.

First, I fitted the separately-painted interior and engines, the latter being a pre-assembled unit, complete with the built-in sound and lights for the M-68’s engines. Here, I masked off the exhausts with Blu Tack, then sprayed with Humbrol Aluminium, along with the exposed machine details that run along the left-hand side. The interior is dark grey and black, with seats that are a pale tan or ivory shade.

The M-68’s hood has a feature shared with many 1960s-era muscle cars, an air-cleaner poking through. The actual prop used for filming in the movie had a V-8 engine, so the kit replicates actual mechanical parts. This whole of this assembly is a gold finish, so I used Humbrol metallics.

The kit supplies white stripes as peel-off decals, but I felt these weren’t appropriate for a ‘proper’ model, so instead I used white decal stock, which is thinner and more realistic. Once these were dry, the fun began with weathering and detailing.

However, I didn’t go overboard with the weathering. The movie version has moderate scuffing and dust, though with the left-side panels removed, there’s more scope with all that pipework. I dry-brushed various metallic shades, including silver, aluminium, gold, bronze, and brass. To do this successfully, you can put some paint on your brush, then wipe most of it off, apply a thin layer of colour on the edges. In fact, you don’t even need a brush, as you can use a piece of scrunched-up tissue which can result in a similar effect.

Finally, there is the figure of young Han Solo. The kit supplies him in pre-painted form, though I found it best to assemble his arms in their correct position, then fill any gaps with modelling putty, prime it all, then repaint.

The landspeeder is a hovercraft design (actually, it has a 'repulsorlift generator') and the kit supplies two belly flaps, which fold down for support and to provide the appearance of being airborne.

The box base (below) emphasises the sound and light effects, rather than supplying useful build information. 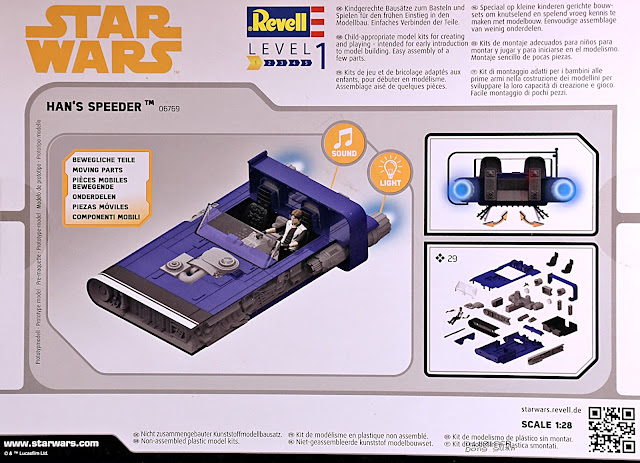 Parts layout (below). Note Han has separate arms, which need snapping into place, before filling gaps with putty and repainting if you wish. 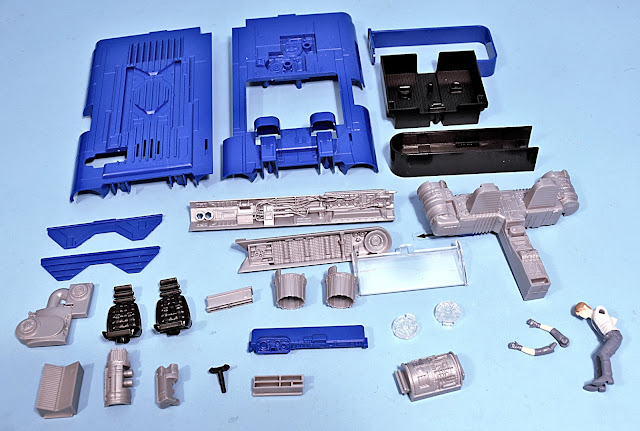 Basic build (below) of the body. Note the nose section is moulded in black, and there’s a fitted roll bar. 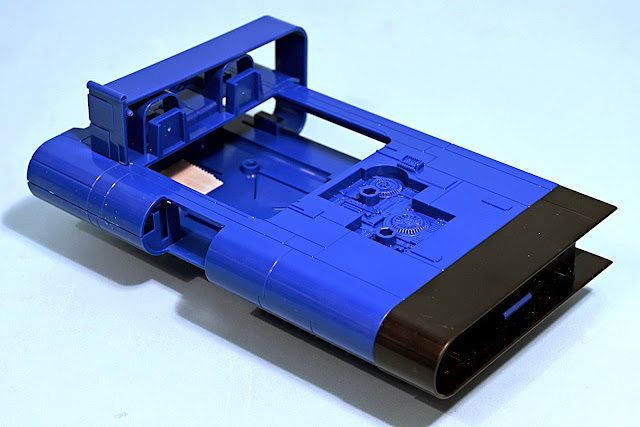 Fully assembled and painted kit (below) has yet to receive its driver. 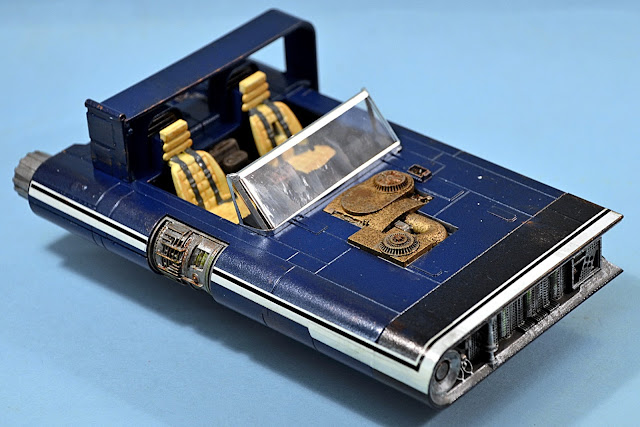 Side details (below) echo the look of other Star Wars craft, such as the Millennium Falcon. 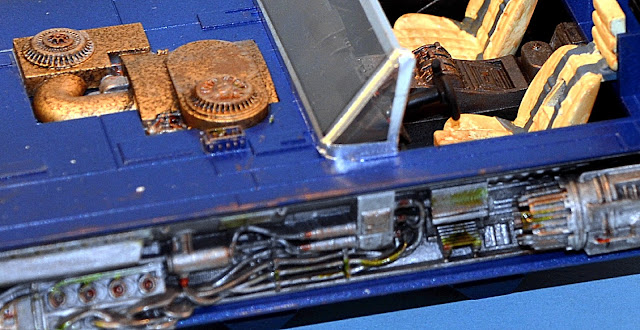 The air-cleaner (below) looks convincing. 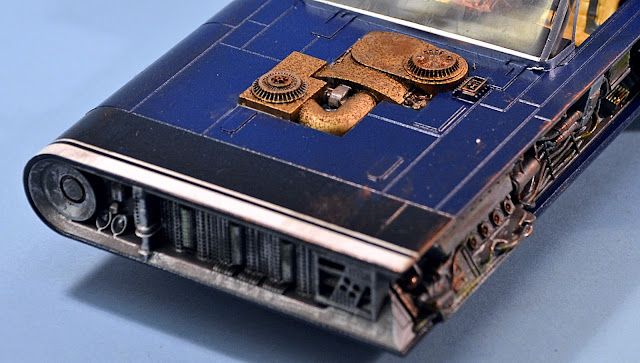 The Han Solo figure (below) fits neatly in the driving seat. 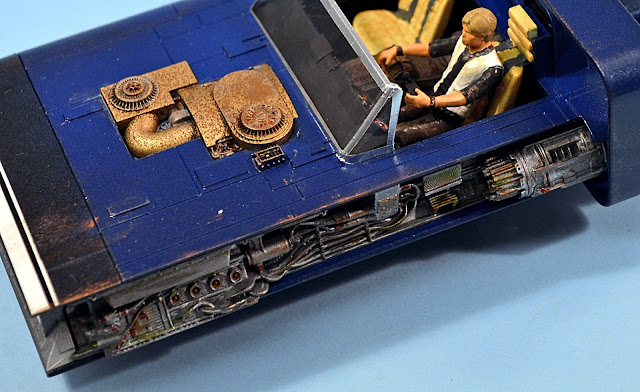 The engine exhausts switched on and lit up (below). 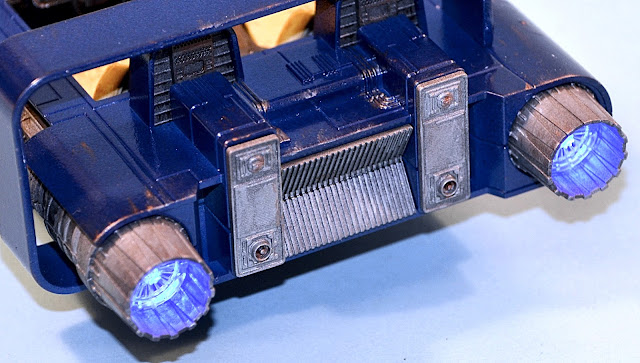 About landspeeders
This kit makes an interesting comparison with Luke Skywalker’s landspeeder, as used in the very first Star Wars movie Episode IV – A New Hope.

The two designs look completely different, though they seem to be much the same length. However, Han’s machine (movie prop below) is considerably wider, box-shaped, and left-hand drive. For the movie, Luke’s landspeeder was built as a custom body on a Reliant three-wheel chassis, with right-hand drive. Interestingly, when the movie first came out, many American publications assumed this was wrong, and flipped any images to make it appear left-hand drive.

Han’s speeder was also a custom built movie prop, but had four wheels. As I suggested earlier, the design was intended to match 1960s-era muscle cars more than anything else, and it was powered by a V-8 engine. The air-cleaner was a functional item, though it had added science-fictional details. The chase sequences seen in the first few minutes of Solo were shot along the lines of The Fast and the Furious movies, after which the wheels were digitally removed. 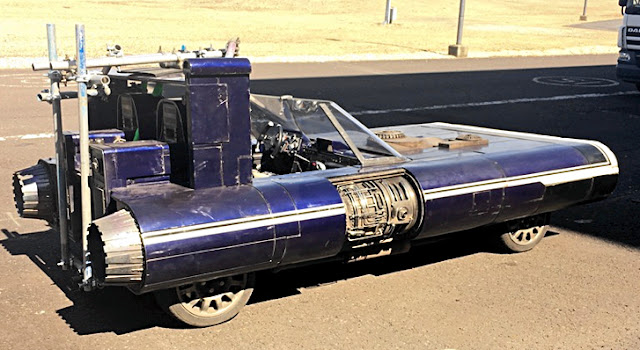 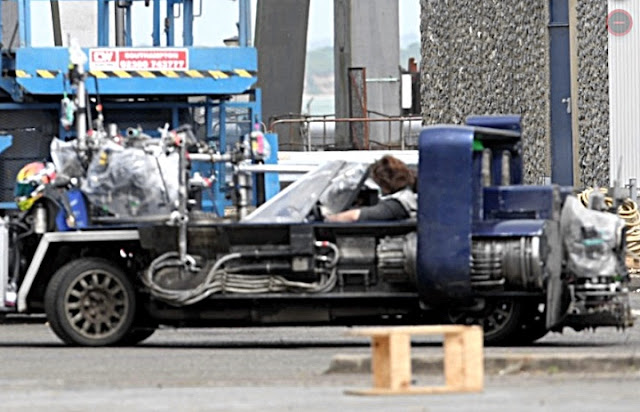 SMN note: There are plenty of other Star Wars speeders around in model form. The Hasbro toy (below) featured in the 2015 release Episode VII – The Force Awakens. In the movie, it is used by Rey (played by English actress Daisy Ridley) who relies on her salvaged speeder for quick transportation across the junk-ridden sand dunes of the desert planet, Jakku.

As for the toy, it has several working features. A pop-up upper section reveals a nifty bolt-firing cannon, which works by pressing a small button. Speed-brake flaps open out at the rear, and the 94 mm (3.75 in) figure of Rey can be posed seated or standing, with or without a rifle. Rey’s height works out to roughly 1:18 scale, one of the standard diecast automobile scales, which could open the door to some interesting display possibilities.

By scale model standards, the detailing of this Hasbro toy is somewhat crude, but the basics are there to repaint it and add super-detailing to your heart’s content. A bonus is that Rey’s landspeeder can be taken apart easily, as it is held together by six screws, rather than snap-fit or cement. The figure too will benefit hugely from some TLC, especially if you use an airbrush to shade in the details of Rey’s flowing clothes.

As for colours and markings, the toy’s yellow-orange scheme can easily be changed, according to your fancy. Perhaps green-brown camo for a jungle world, shades of blue for an ocean planet, or maybe white and grey for an ice environment. Your choice! 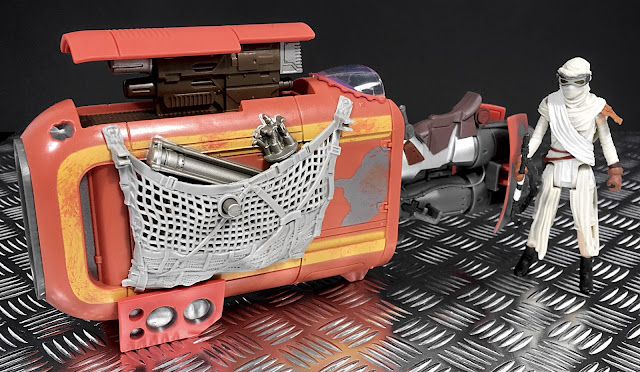 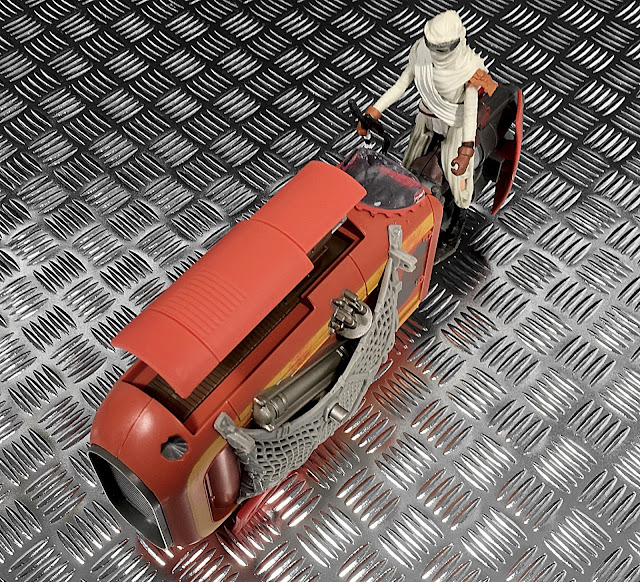