REVELL 'BLACK PEARL' GALLEON, AS SEEN IN THE MOVIE 'PIRATES OF THE CARIBBEAN' 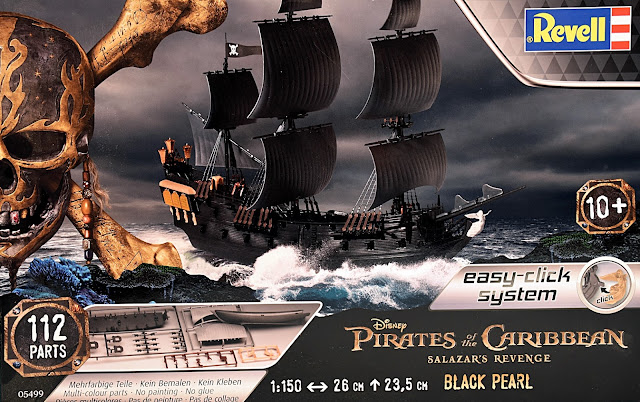 IN 2017, WE REVIEWED the 895-part Revell 1:72 scale kit of the Black Pearl, as seen in the Disney movie saga Pirates of the Caribbean. The kit we show here is a smaller 1:150 scale version of the same ship, though it still comes with 112 parts.


Mat Irvine: The 1:150 scale Black Pearl is supplied to assemble using the Revell ‘easy-click system’ in which the parts simply snap together. They don’t necessarily need cementing, though that can always prove an advantage if you wish the finished model to stay completely firm and solid.

Although basically a snap-together model, the Black Pearl is still a fairly complex build. As with its larger sibling, components such as the sails are injection moulded parts, which are thicker than true-scale, but are far easier to deal with than vacuum-formed parts, which is the usual method for the unfurled sails of galleons.

Despite its name, the components of the Black Pearl are not moulded in all-black. The sails are actually a dark grey, and there’s a separate wood-coloured runner, which includes items such as the ship’s wheel. 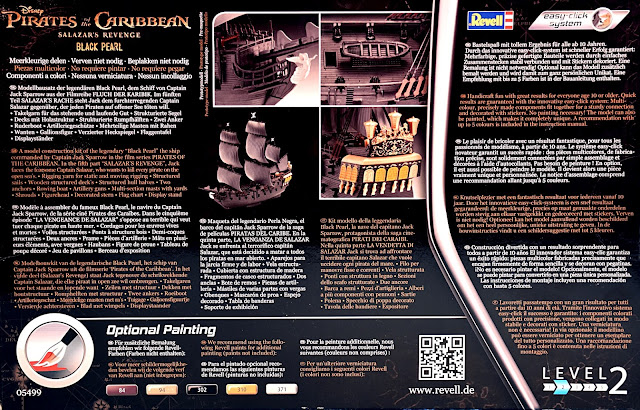 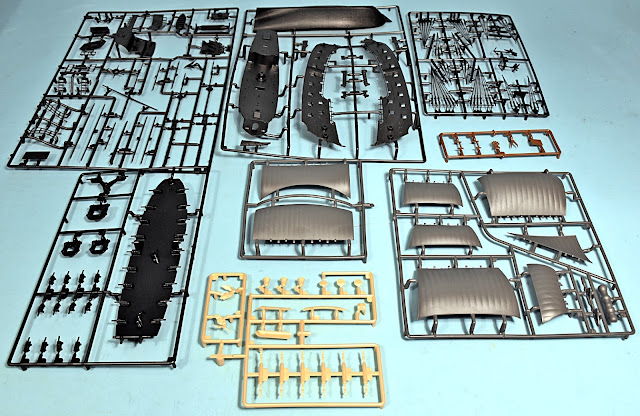 The instruction booklet (below) is to the usual Revell high standard. 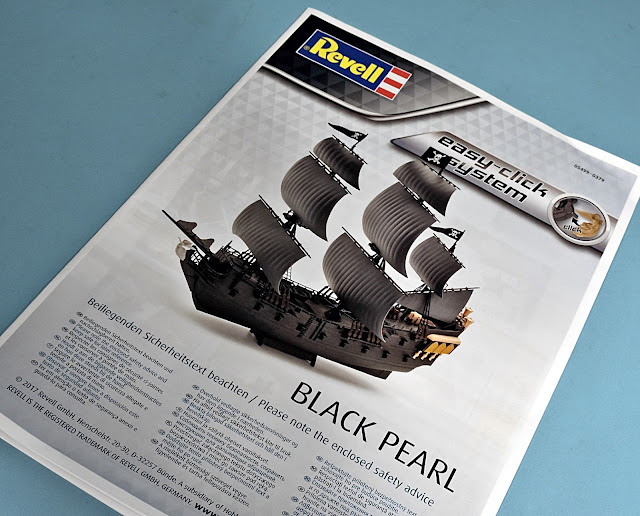 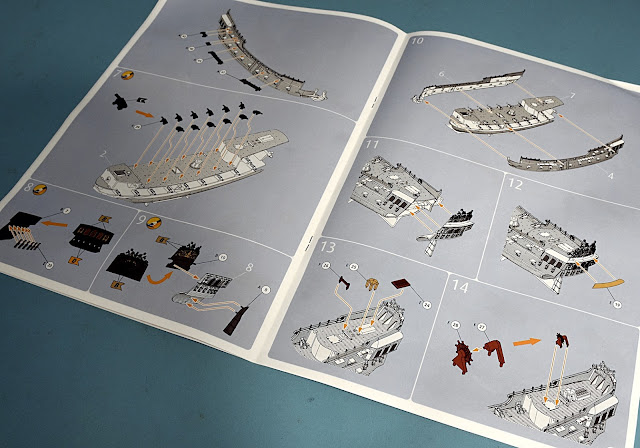 Fully-assembled model (below) photographed at the London Toy Fair, 2017. 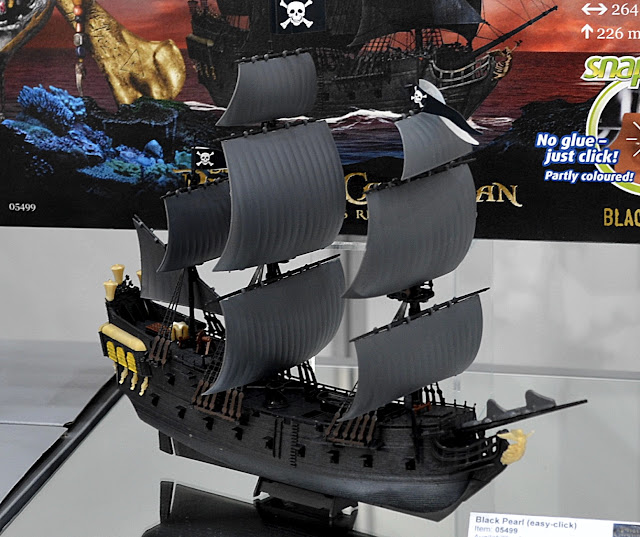 Click here to read SMN review of the 1:72 scale Black Pearl.
SMN note: As with similar kits, the Black Pearl can be the basis for a neat fantasy model. You could delete the sails, perhaps replacing them with contra-grav lift spheres or a helium-filled balloon, when you would have the basis for a *sorta* steampunk alt-universe creation.

So far as scale goes, you don’t need to stay with 1:150, as a few Warhammer 40,000 figures on deck would transform it into something very different indeed. The steampunkish Pearl would then be transformed to a different scale. Warhammer 40,000 figures are 28 mm, which allows them to fit comfortably with roughly 1:48-50 scale models - and that means you can feel free to add all sorts of existing aeromodelling components on board, both above and below decks.

The paint finish is entirely up to you – we'd be up for black and blood-red, with copper and brass accents.

Sketch (below, courtesy Pinterest) shows a few variations to set your mind at work. 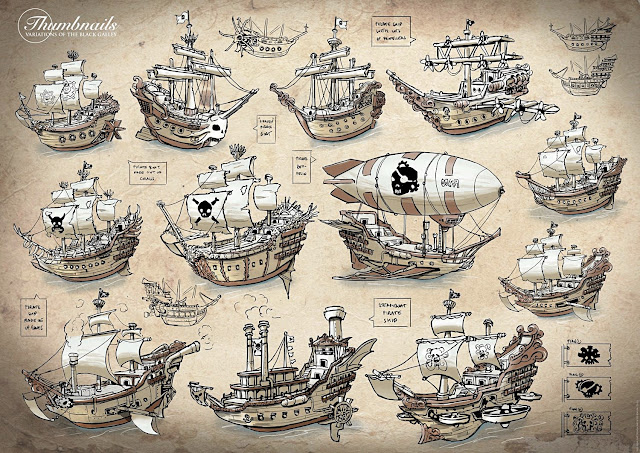 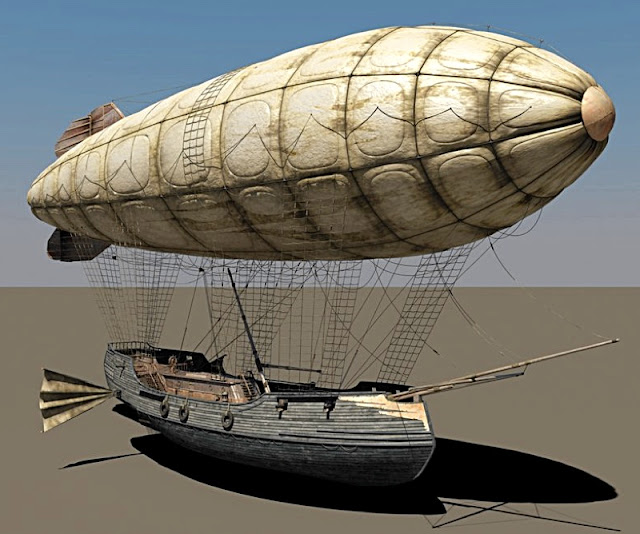 Warhammer 40,000 figures (below) feature in our upcoming book series Model-Making Mindset, due out soon. Appropriately-painted figures could be the making of a bloodthirsty fantasy crew. 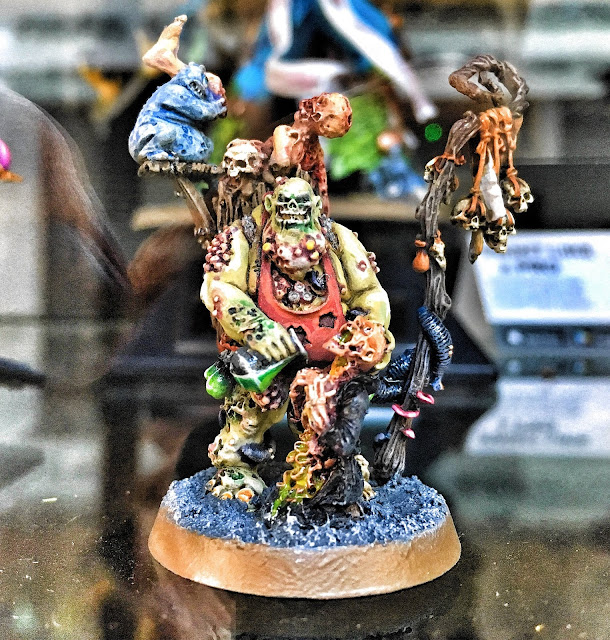