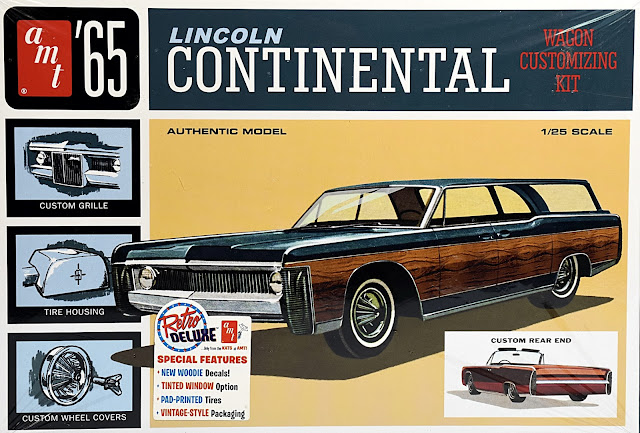 UNLIKE SOME RECENT AMT reissues that use more recent tooling, this 1:25 scale Lincoln Continental is based on the original annual kit, first released in 1965.


Mat Irvine: The AMT Lincoln Continental has limited detail so far as the chassis and running gear are concerned (it has a classic one-piece chassis pan) but the model is otherwise excellent, and even though the original tooling is now over 50 years old, it has stood up extremely well. The interior is also ‘old school’ and has a one-piece tub, though with separate dash and front seats.

The kit comes as a ‘3 in 1’ model, with parts in the box enabling you to build one of three options, custom, fantasy wagon, or convertible. The AMT box label describes the model as Retro Deluxe, and included are ‘new woodie decals, tinted window option, pad-printed tires,’ all presented in ‘vintage-style packaging.’

In the real world, Ford had earlier surprised rivals with the Continental. In 1960, the Lincoln looked similar to its two main rivals, the Cadillac De Ville and Chrysler Imperial, which had rounded styling and rear fins. However, the following year, the Lincoln wore new design clothes, with clean looks that looked very modern, even futuristic. By 1965, the competitors had also lost their fins.

So far as the kit’s ‘fantasy wagon’ option goes, the lines of the slab-sided Lincoln Continental work extremely well. Because of the one-piece chassis and interior, the build is simple, but this kit, in common with many reissues, has two types of transparencies. There are the usual completely clear components, but also in the box is a duplicate set, moulded in a smoke-tinted shade.

The new decal sheet has two sets of wood-effect ‘woodie’ decals for the sides. These look very good, and I finished the paintwork of the review kit in Testors Revving Red metallic, to set them off nicely. A nice touch is the treatment of the whitewall tyres, pad-printed and accurate.

Incidentally, the new box is not a reproduction of the original, which had an unusual vertical design. But the box does echo the graphic style of the 1960s. The side panels (below) include details of what’s inside, plus a picture of the convertible version. 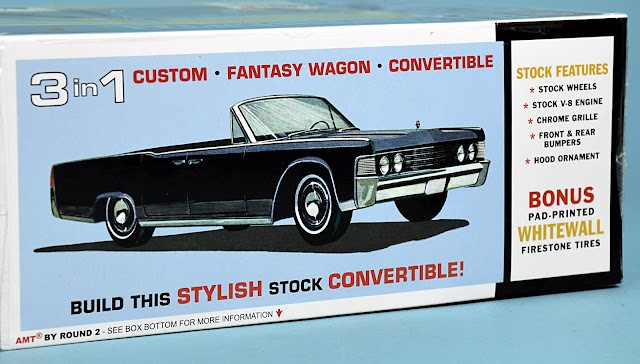 Parts layout (below). New for this kit are the dark-smoke transparencies, shown top right. 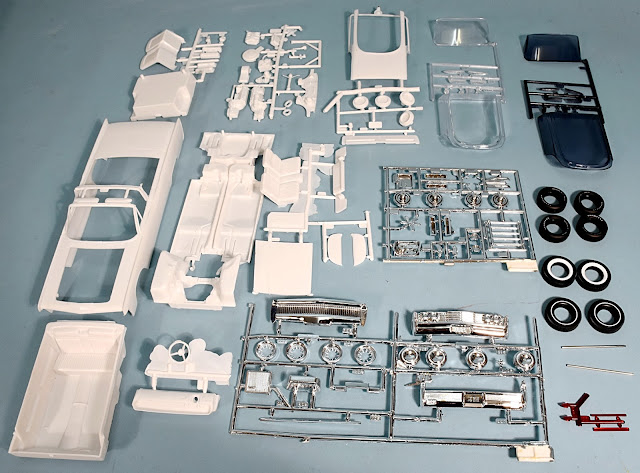 Whichever version you build, this section of runner (below) supports the windshield frame, and needs removing. 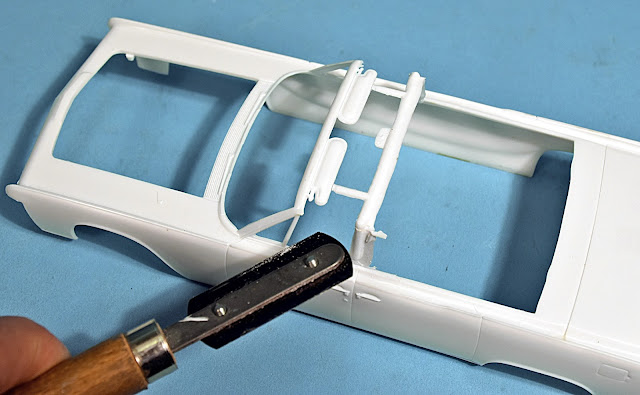 For the station wagon, the trunk lid needs removing. There are scribe lines on the underside. You don’t need all the tools pictured (below) but a selection is useful. 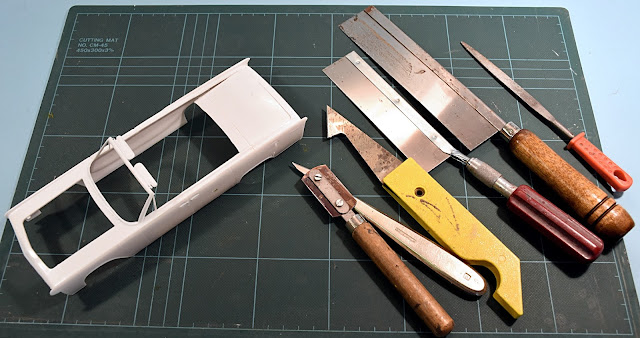 The trunk lid is shown here separated (below). The station wagon roof is also shown, and for this version, the sun visors also need removing. 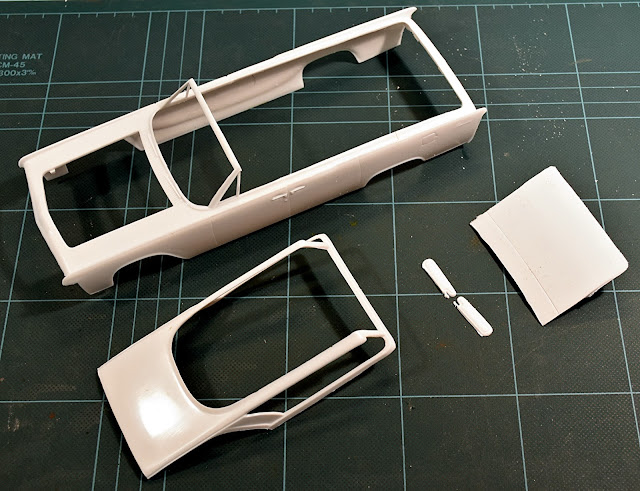 The finished new Wagon (below) complete with a set of wood-effect decals. 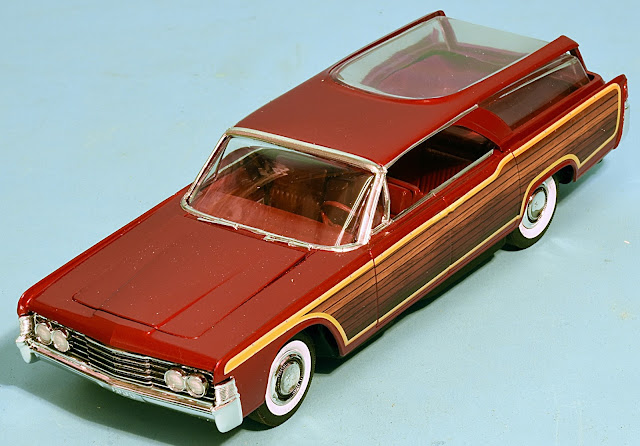 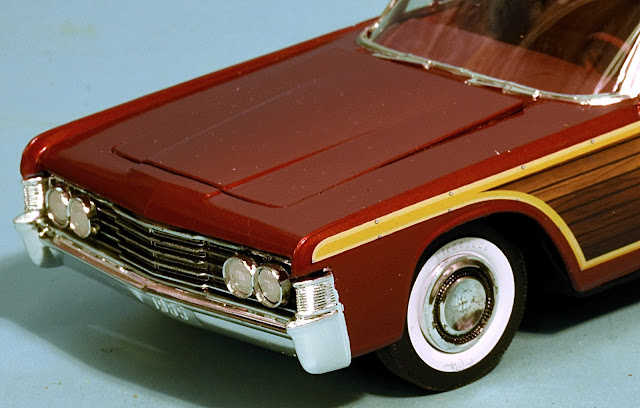 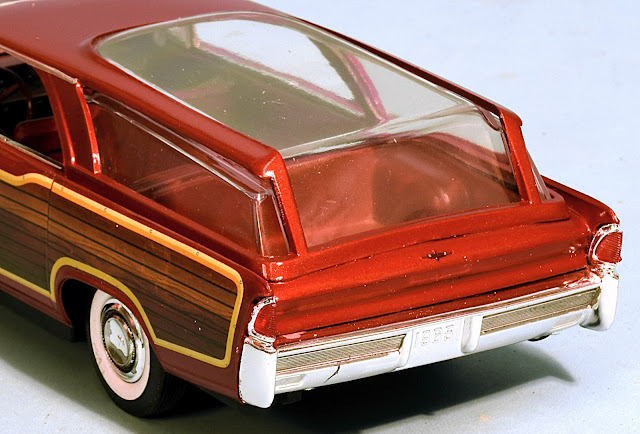 The three main sub-assemblies (below) are the interior, chassis pan, and body 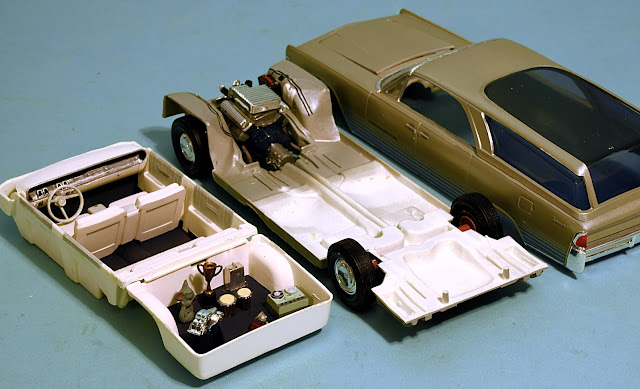 Closeup (below) of the sort of things used in the wagon load bay that could be typical for a show car. The reel-to-reel tape recorder (far right) is included, everything else comes from other kits. 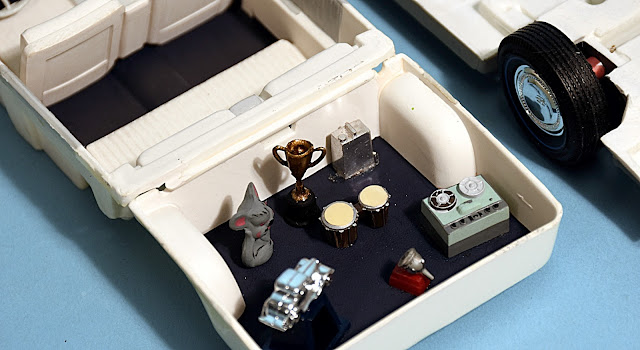 Three variations on the custom theme (below). 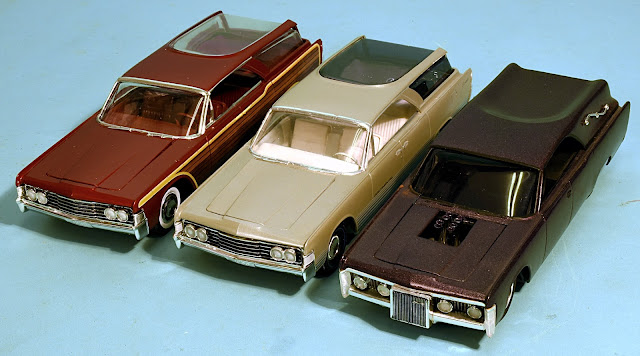 Updating the past
Years ago, I built one of the original wagons as a sort of ‘custom hearse,’ based on a similar conversion that appeared in an issue of the American magazine Car Model. I used the station wagon top and the supplied custom grille. I fitted the wagon top glass, smoothed it in with model putty, then painted over the bodywork. I used AMT Frost Grape metalflake purple, and it certainly looked the part.

For this 2018 article, I dug out my old-build, updating it with the new kit’s smoke-tint windshield. I also used the recent AMT fuel injection stacks, turned from actual aluminium tubing. I had previously fitted styrene versions to the engine in the hearse. Now I replaced these with the more accurate metal stacks. Finally, I added custom headlamps from the new kit, to make four lights in all.

The custom hearse (below) with a skeleton from the Monogram Boothill Express kit, plus a bat and gravestone from The Undertaker Aurora/Polar Lights dragster. 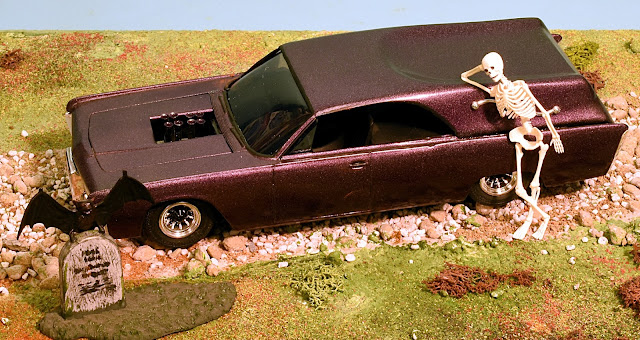 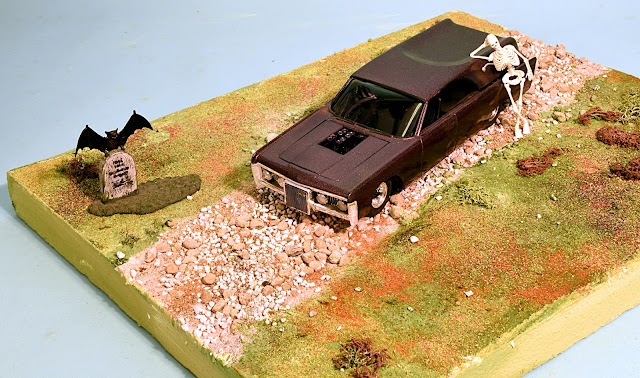 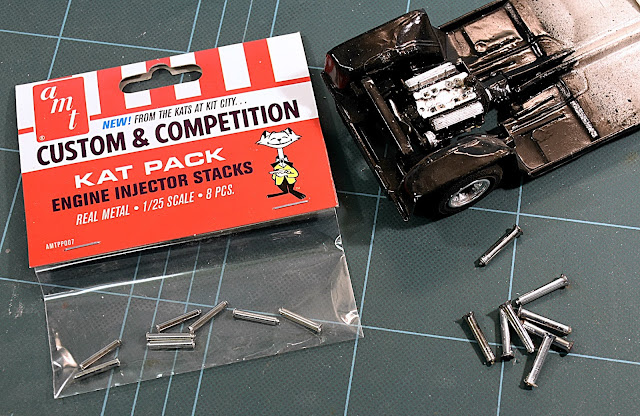 The issue of Car Model magazine with the hearse idea (below, red panel). 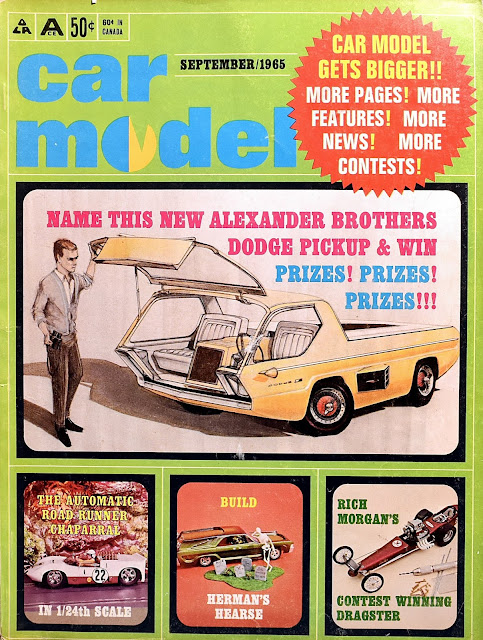 Note: Another name for a fantasy design is a ’phantom,’ meaning a showroom car that didn’t exist, but could have. Phantom tends to be applied to what might have been a showroom car, but which didn't actually get manufactured, in this case a station wagon version of the Lincoln Continental. Only convertible and hardtop versions were made.