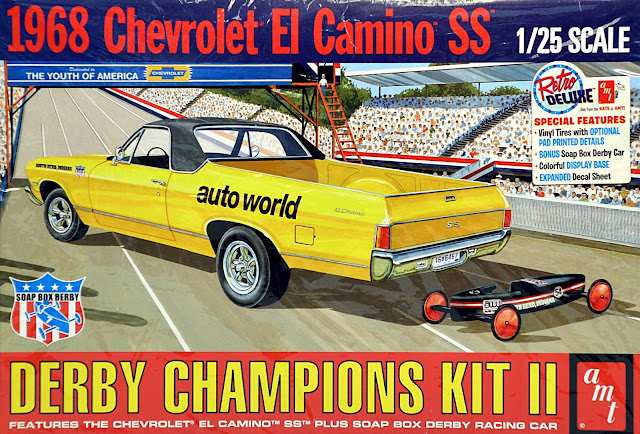 THIS INTERESTING AMT RACING KIT is based on a model first released issued in 1969.

Mat Irvine: Most of this ‘update’ is actually brand-new. In fact, the only thing from the 1960s is the soap-box downhill racer, the whole reason for the kit. The original model was one of a series that AMT issued, when they took an existing kit, added something else, then employed specific box art and decals.

Why choose an El Camino?
Chevrolet sponsored the Soap Box Derby, so it was a natural to include one of its vehicles as the main part of the kit. And of course, a lone 1:25 scale soap-box racer would be a tad small, and rattle around in the kit box!

The 1968 El Camino is based on the then-current Chevelle sedan. The complete tooling for the original (which was actually a 1969 El Camino) has been lost. So you don’t get the original pickup, though the soap-box racer didn’t go astray, so has been re-used.

Diorama bonus
The original kit had no card diorama, but this time there is one, and it's been made especially for this kit. Such card bases are now common with AMT and MPC, and this one matches the scene shown on the box. The diorama artwork was painted by long-time box artist, Don Greer.

Build notes
This new AMT Chevrolet El Camino is far more detailed than the original. That used the standard one-piece chassis approach as used by most Annual kits at the time, though it did have a separate rear axle and exhaust. The new kit has a fully-detailed underside, with separate front and rear suspension.

However, it’s a snakes and ladders situation elsewhere, as the new kit includes just one engine and two wheel options. The 1969 kit offered two engines and a choice of four wheel sets. On assembly, the new instructions indicate that you can fit the body over the chassis with the completed engine in place. Actually, you can’t – the fan and drive belts have to go on afterwards.

But the little soap-box racer is a neat model in its own right, and dates from a time when many kits included a bonus of some kind. Other AMT bonus subjects included a go-kart and a Triumph motorbike.

Race-winner Twig Lew
The first kit celebrated the 1968 World Champion, a fresh-faced 11 year-old, called Branch ‘Twig’ Lew. The Fort Wayne, Indiana, boy was pictured on the box, and received $7,500 in scholarships, worth nearly $55,000 today. Being a kit-box star must have given young Twig Lew hero status at school. I wonder what became of him?

SMN note: We haven’t been able to track down Twig Lew, but in 2018 he ought to be 61 years old. So maybe he's organizing soap-box races for this generation of kids. Let’s hope so! 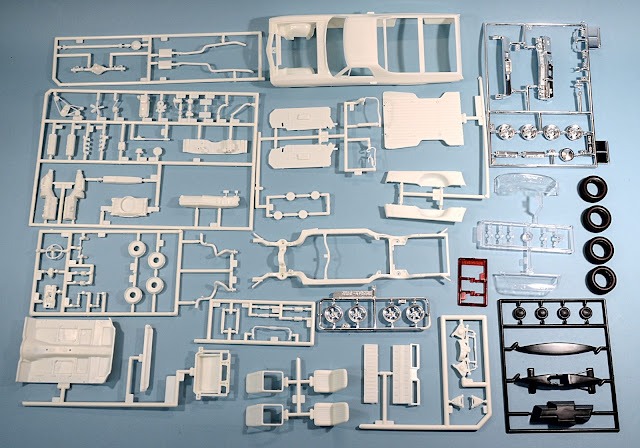 Lots of paperwork in the new kit (below) which includes instructions, decals, and the newly-included diorama. 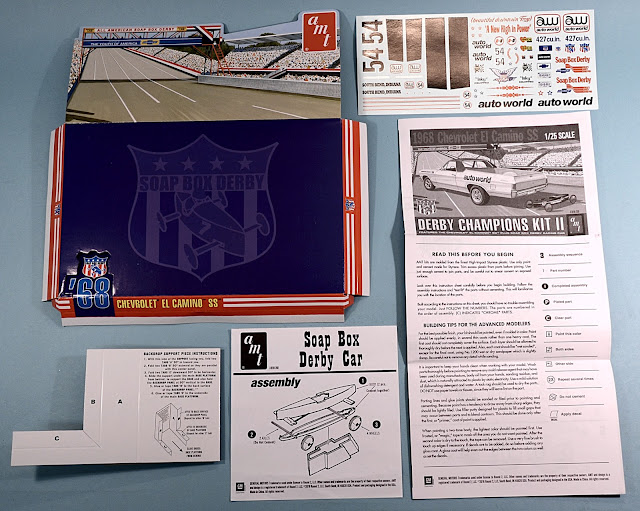 Original box-art (below) dates from 1969. The new box is similar, even if Twig Lew's portrait has vanished. 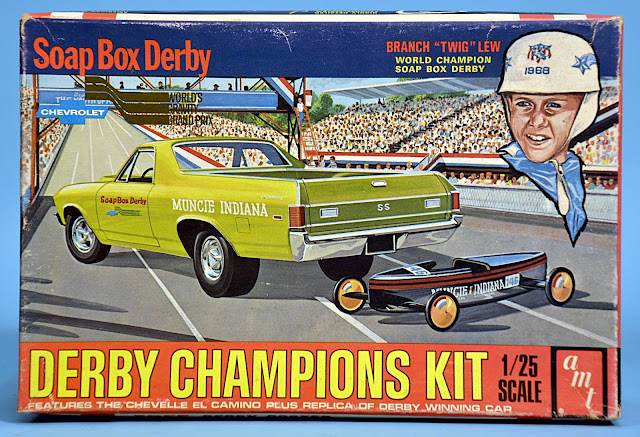 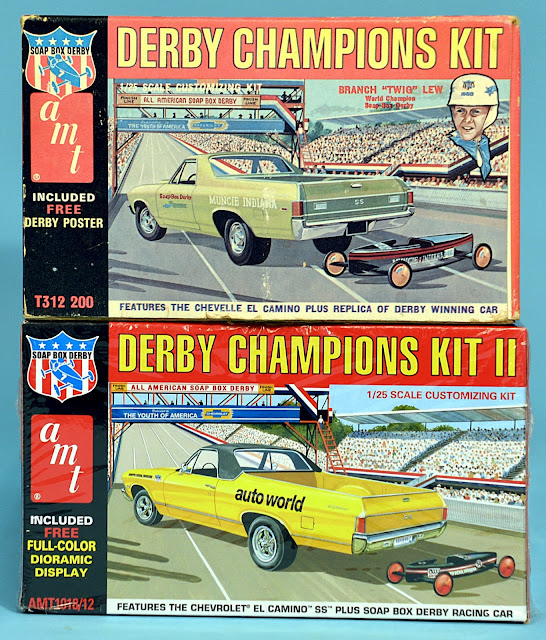 End-panels of the old (below, upper) and new box show that now you get a diorama instead of a free poster. We'll take the useful diorama. 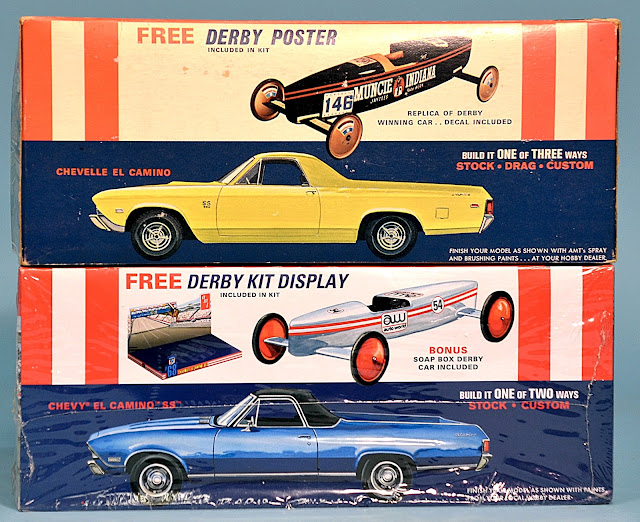 Paperwork and soap-box racer tooling (below right) from the old kit. Only the racer is the same in both issues. 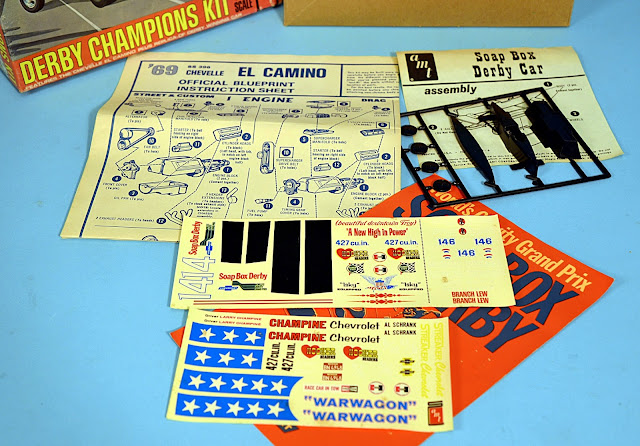 Comparing the body of the original 1969 El Camino (below left) with the 1968 version, to show the difference in kit design and assembly. The old has the pickup bed as part of the bodywork, with front fenders as part of the chassis. The new model has this situation reversed. 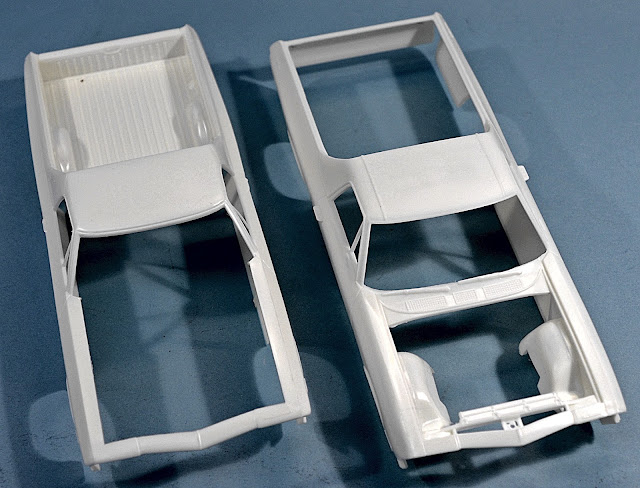 A big and small duo, the two vehicles (below) are shown here completely assembled and painted, and mounted on the excellent diorama. 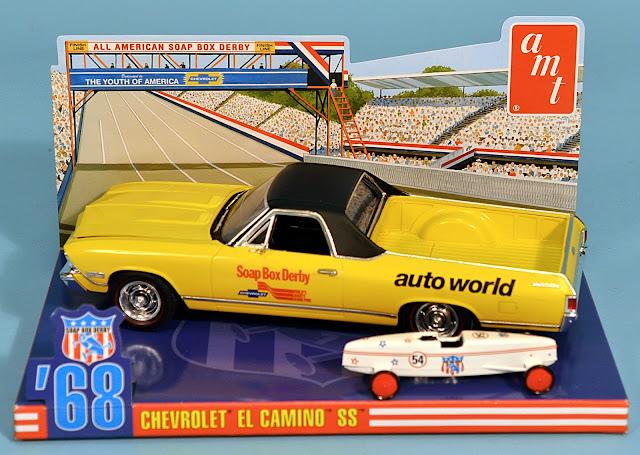 The assembled soap-box (below) in a suitable pose, ready for the start of a race. It lacks a driver sitting in the cockpit, more's the pity. 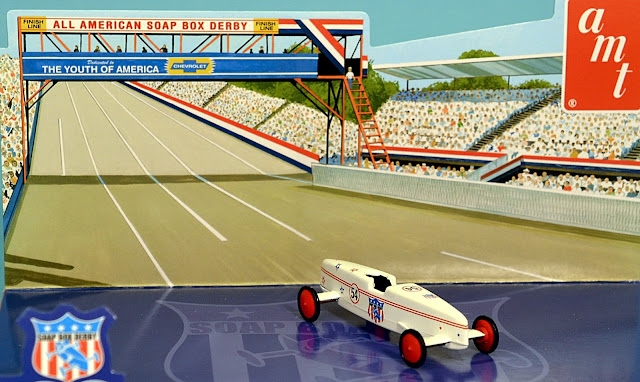 A closeup look at the racer (below) shows that it is a neat little model in its own right.

The old box (below left) next to the new diorama and El Camino.

The 1968 pic (below) shows demon driver Twig Lew at work. 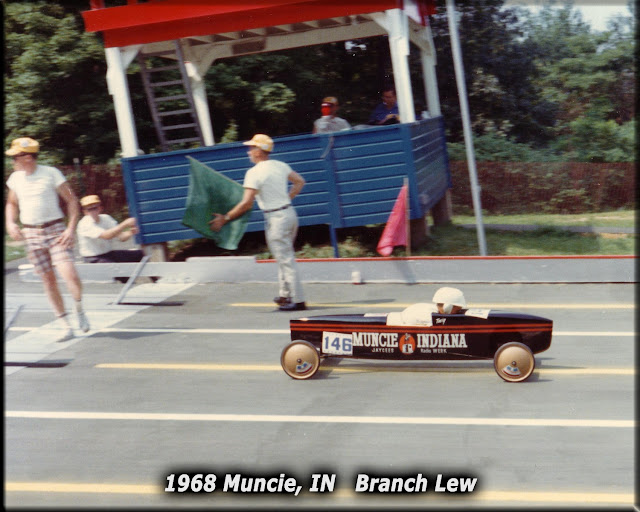 After 85-odd years, the Soap Box Derby is still going strong. Read about it here.

Thanks to Round 2 for the review kit and to Soap Box Derby for the Twig Lew pic.