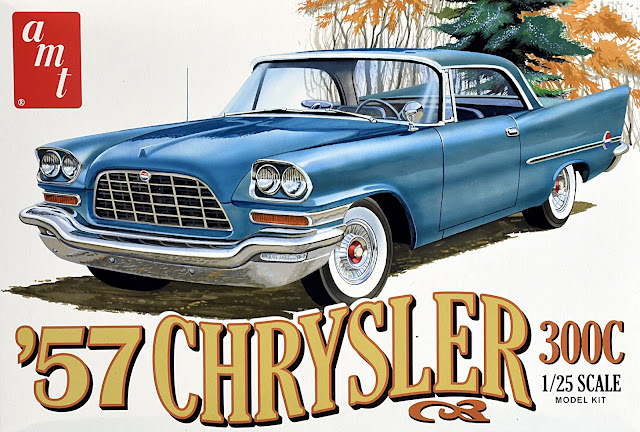 IN REAL LIFE, THE 1957 CHRYSLER 300C came with long tail fins and a yawning chrome grille. And this 1:25 scale AMT kit models the original nicely.

Mat Irvine: The 1:25 scale Chrysler 300C might seem like a reissue of an AMT original Trophy Series release. AMT did, after all, issue cars from the same year, such as Ford and Chevrolet. But this is a more recent kit, initially dating from the time when AMT was an Ertl brand.

Consequently this Chrysler 300C has more modern features, including a full chassis with separate frame, and a multi-piece interior. Earlier Trophy Series were more detailed than the ‘annual’ releases. Although many still came with solid chassis rails and pan, separate axles, suspension and exhaust were the norm, though the interior would have been a one-piece tub, albeit with separate seats and dash.

But, unlike earlier Trophy Series, which could usually be built in one of three ways – stock, custom, or competition – this latest release is purely a ‘one way’ build. The engine is a 392 cu in V8, with dual-carbs, and the extra details car modellers expect these days, such as a separate starter motor and oil filter, an air cleaner in several parts, with decals, and even a separate breather tube.

The wheels have nicely-moulded inset whitewalls, while the multi-piece interior has separate side panels, front and rear seats, as well as an instrument panel. The instruction booklet shows where you can add further details.

Chrome parts are included in this kit, though the amount of gleaming trim is fairly sparse for a 1950s-era car – just the grille, front and rear lamps, and bumpers. Extra chrome is limited to one thin stripe on the rear quarter panels, and you have to add chrome to the window surrounds.

The new box art (header, below) is quite striking in a minimalist way, with just a few trees in the background. It harks back to when AMT issued a number of kits with no logo or lettering at all on the box-art, which featured just a painting. Here, you also get the AMT logo and the vehicle name, but that’s about it. However, the box side panels have plenty of information, including a rear three-quarter view of the car.. 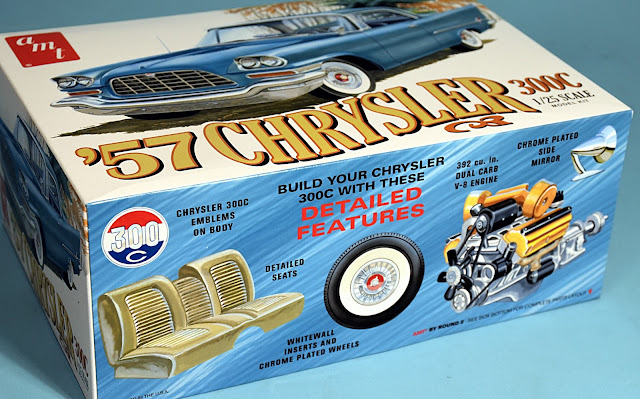 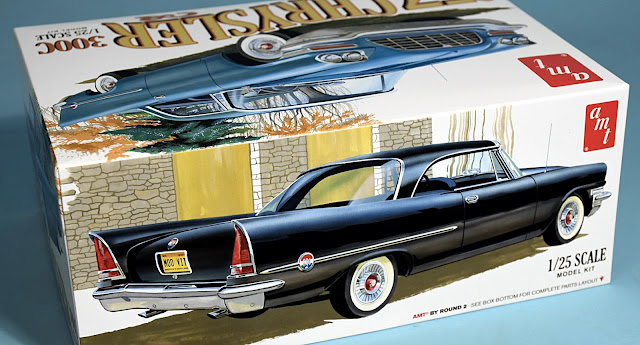 The 120 components (below) are moulded mostly in white. 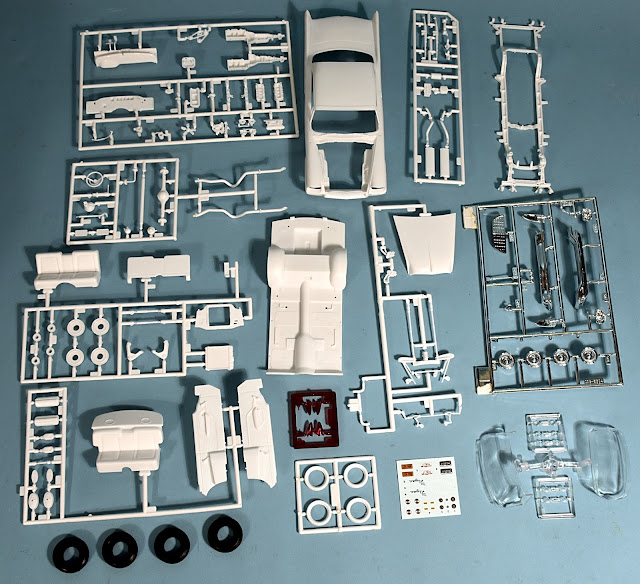 The instruction leaflet (below) is clearly laid out, and includes painting notes. 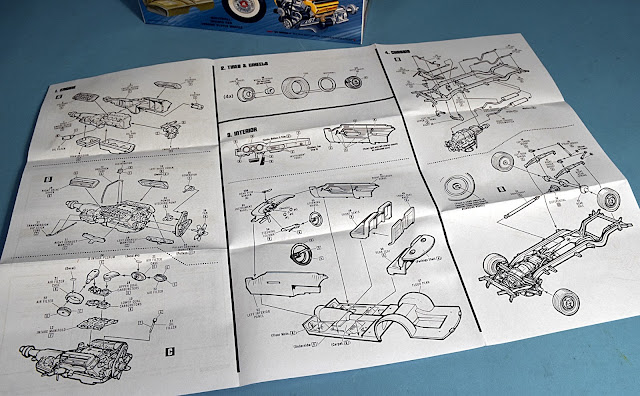 I painted the bodywork in a shade called Bougainvillea, from the PlastiKote spray range. 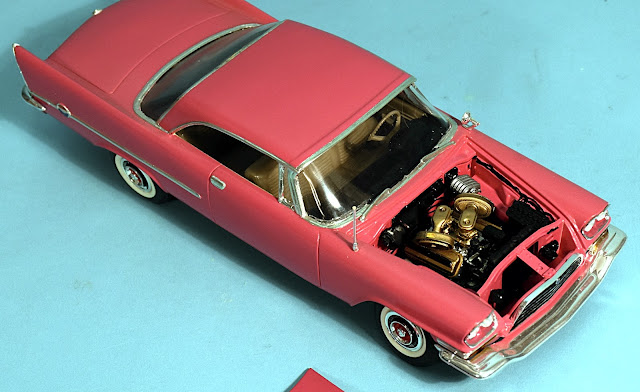 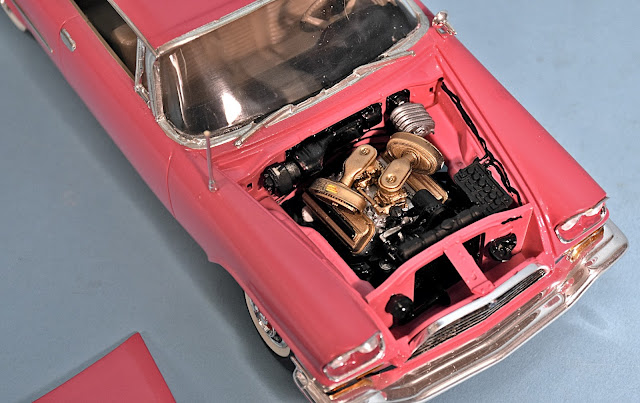 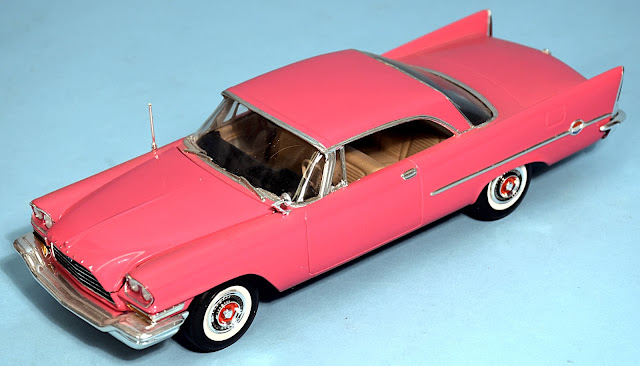 I went slightly against the instruction recommendations, as I fitted the interior into the body (below) off the chassis. 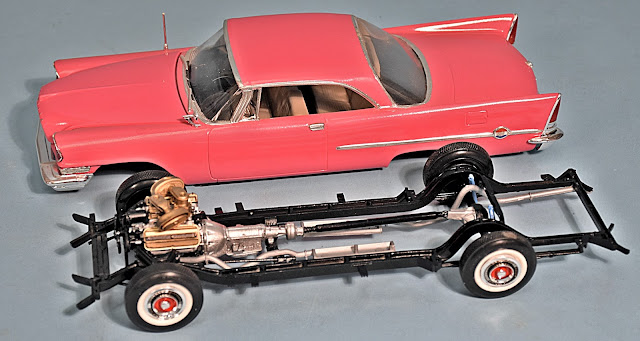 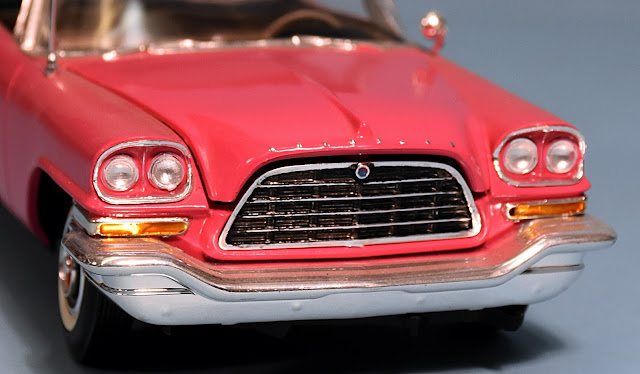 The blue car (below) is the 1962 Chrysler 300, made by Jo-Han. This model had a similar grille shape to the 300C, but the designers turned it upside down! Then they added a quartet of headlights to match the sloping grille angle. 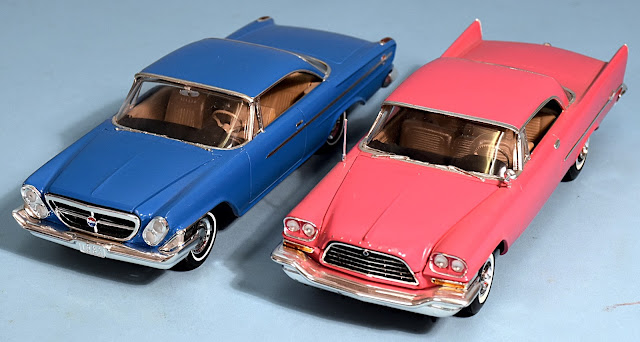 Summation
A neat kit of a classic Chrysler, a real blast from the past for lovers of US metal.

SMN note: The 1957 Chrysler 300C was one of the 'letter' series, which started with the C-300 of 1955. Today's descendant was intended as a modern interpretation of the original C-300. We go for the punchy egg-crate grille (below), rather than the more restrained update (bottom).